Afternoon #warmongers and #warhammercommunity it's been a long time since I've done a 40k battle report - February 2019 in fact at the Last chance Open. Nearly 3 years since my last game! And, there's been a new edition, so this is my cherry being well and truly popped. 🍒 Ben suggested we have a game, so we played the Only War mission to get a feel for the rules with just 500pts. There were 4 objectives [spore mines]: 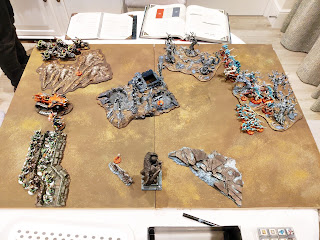 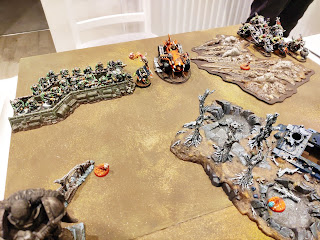 I had a Tyranid Prime and 3 Tyranid Warriors [all with Deathspitter and Scything Talons, because I misplaced my kitbashed Prime Lashwhip and Bonesword], 10 Termagants with Fleshborers, 3 Hive Guard and a Carnifex with 2 twin Devourers with Brainleech Worms, Enhanced Senses and Spore Cysts. 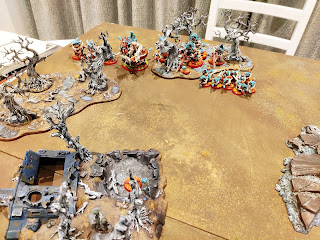 Ben went first, moving his Scrapjet up and then getting Da Jump to move the bikers across the board to face my Termagants. He fired all over the place but the combination of the Light Cover, Spore Cysts and Leviathan's Synaptic Imperative [6+ save to ignore wounds, which worked a few times in the first turn] meant nothing died. Only one Hive Guard took 2 wounds and he failed the bikers charge into the Termagants. 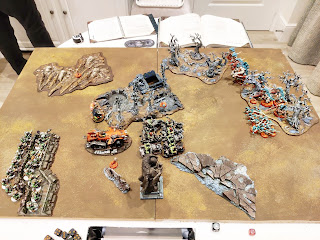 In response I moved forward and shot everything at the bikers. As the bio-ammunition did it's job there were just two bikers and their boss left. The Carnifex couldn't bundle into the charge, leaving the Termagants on their own. But I used the Caustic Blood stratagem in hopes their sacrifice might bring about the bikers doom. 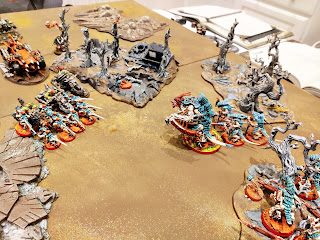 As the Termagants got squished one more bike would succumb thanks to Morale. We'd later find out that their Choppas should have been -1AP making the Termagants even easier to kill but they'd clearly forgotten to sharpen them this game. 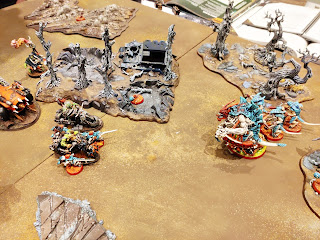 The Boyz moved out from the barricades, able to conga line between both backfield objectives. The Weirdboy, holding one objective and casting Smite at the nearest target, killing the last two Termagants and releasing the bikes from combat. The Scrapjet drifted round the melee aiming for the Carnifex. I was relieved the Carnifex was taking the heat off the Hive Guard but all the shooting took 6 wounds off the Carnifex. 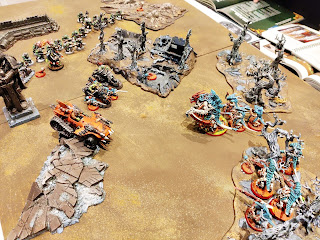 The Scrapjet multi-charged the Carnifex and Warriors and would be backed up by the bikers. The Carnifex was down to 2 wounds, so it didn't take much to put paid to the monster and the Warriors, though I think they did damage the Scrapjet a bit with overwatch and attacks. 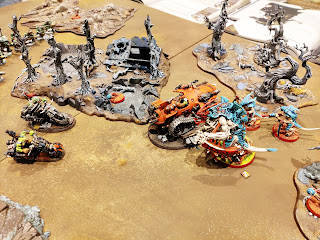 Having wiped out my centre the Bikes consolidated into the Hive Guard - this gave me free attacks but would leave them locked in combat, rather than able to shoot. Even with the Tyranid Prime's Swarm Leader rule still in place on the Hive Guard [re-roll hits] they couldn't do more than a wound or two. In my turn they attacked again but it wasn't enough, with the Prime entering the combat I came to regret not finding the Lash Whip and Bonesword Prime as his Scything Talons failed to penetrate their t-shirt armour. 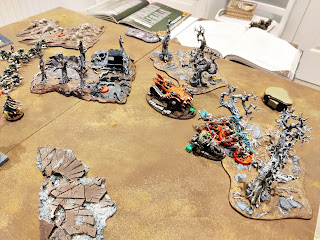 The Scrapjet barrelled in to what was left of my army and they were ground into past beneath its tracks and drill. Tabled and many VP's to Ben. I hadn't even scored one thanks to his Bikes being ObSec. 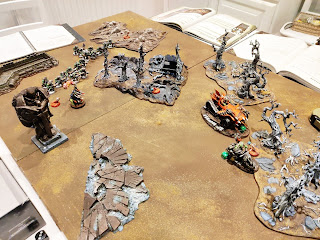 Ben felt it had been very one-sided but I think initially it looked like I would have taken out all the bikes with my first round of shooting. I had held off shooting twice with the Hive Guard as it was our first game and I didn't really want to remove the entire unit in the first turn. We're learning and deleting a unit straight away is no fun and wouldn't help encourage us to continue playing. Ben thought I should have done it, so for research purposes I rolled a second round of shooting to see what would have happened to the three remaining bikes in that first turn and indeed they would have all died.

So, what did we learn - that two Ork Bikers are still pretty lethal - don't let them get close [somehow]. Find your Lashwip Bonesword Tyranid Prime - Scything Talons are pointless [does that mean I have to rethink all my Warriors?]. And, always shoot twice with Hive Guard 😉
Posted by 40kaddict at 12:31