Afternoon #warmongers and #warhammercommunity I've been #paintingwarhammer on my TT Combat Gothic Ruins. First up some simple first stage Red Planet BASE highlights all over - stippled/drybrushed on. 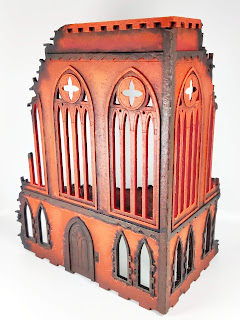 The advantage for having the same colour for your buildings as your battlefield is you have this technique and all it's colours ready to hand [although when I run out of the Home & Bargains Vermillion I'm stuffed!]. 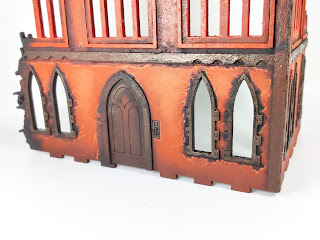 You can see I added some shading around the windows to make it look like the top rendering had fractured off round the window frames. I then added highlights to the cracks, just the same as my House Raven Imperial Knights - yet more transferrable skills! 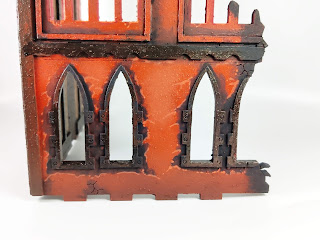 I shaded the edges of the ruins with black - where they might have been damage by fire and smoke. 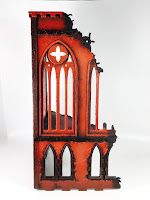 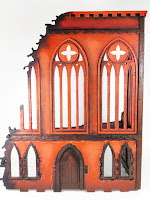 Inside I'd stippled on more Burnt Umber on the cream walls to give a grungy grimdark finish. 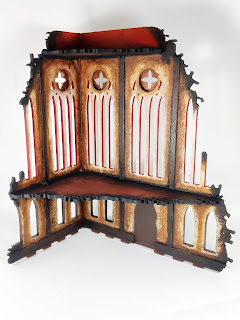 On my Sanctum Imperialis I went on to add some bone highlights to tone this brown grime down, but I deliberately decided to leave this as is for a few reasons. Ordinarily I get to this stage and wish I could leave it but feel compelled to carry on painting, so for once I refused to be a slave to my compulsions. Also, it's quicker to leave it as is and as much as I like this terrain a quicker more slap-dash approach is fine. 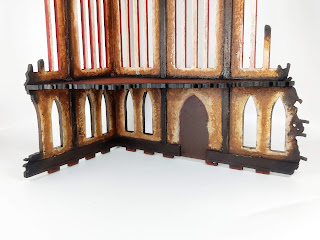 Additionally, it would be useful to have something that didn't go all the way to the degree I did on the Sanctum Imperialis, just as a measure to compare when I do. 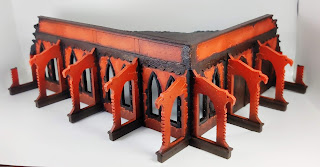 That's not to say I've rushed this, far from it. I thought I'd be really quick with it but I did far too much detail than I wanted to. 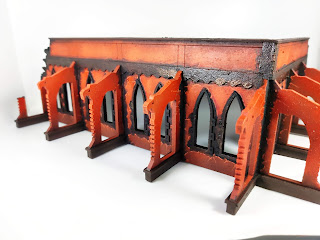 In my defence I always add far too much detail but I had hoped to fly through these and not worry but I think I settled somewhere inbetween, and this is just before the Blessed Verdigris was to be added! 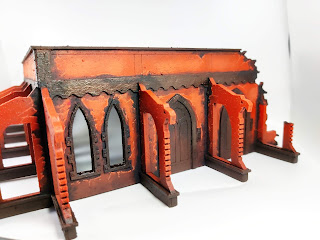 I did discover this floor has bowed, which was quite a surprise. I think I stored it with something on top and it;s pushed it down by at least 5mm in the middle. I might look to try and weight it in the other direction.

I liked the floor like this, and probably should have left it. but there was going to be now way I couldn't add some more metallics and verdigris, so look forward to how I foolishly handle that in the next update. 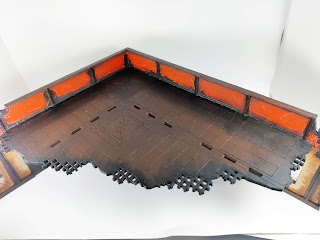