Afternoon #warmongers and #warhammercommunity we've been playing #new40k [is that hashtag still valid?]. Ben and I decided to go for a bigger game this time - 1,000pts. However, an Incursion battle is still the small board, which looked very odd them's the rules. I brought some terrain and it may look like there is too much, in fact a lot of it is utterly redundant aside from it making the board difficult to traverse, which was the point. I thought it'd be interesting to have us forced into choke points, neutralising some of the advantages of my Knights and also the speed of the Orks - would it work that way though? We'd rolled Divide and Conquer as a mission and we spent ages choosing our Secondaries but I won't go into detail as we quickly abandoned any effort to keep track of score. 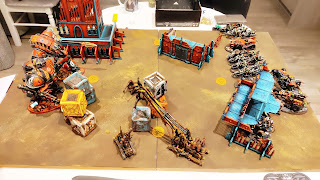 I had a Preceptor, my Lancer and a Warglaive. I thought I was really clever with my Heirlooms and traits. The Preceptor had Armour of the Sainted Ion for a 2+ save and Ion Bulwark for a 4+ Invulnerable save. The Lancer had Knight Seneschal for +1 Attack [giving him 6!] and Mark of the Omnissiah for minimum 2 Wounds back each turn thanks to the Sacristan Pledge. I was feeling pretty cocky and elected to go second. 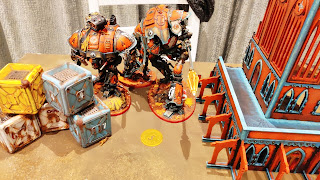 Ben had got rid of the Boyz, had more units of Bikers, two more vehicles and a Wartrike and Ghazgkhull was behind the Sanctum Imperialis on the right. 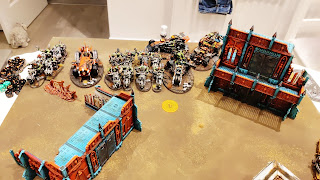 Turn 1 and Ben called the Waaaaaargh! with Trikes and Bikes surging forward. 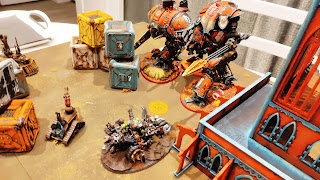 Everything fired at the Lancer, it even took 4 wounds off thanks to Shoota fire! 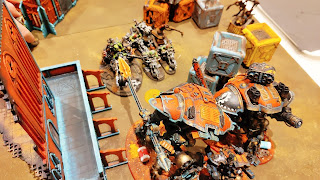 By the time the Trike got into combat the Lancer was down to 8 wounds from 26. The Bikes also multi-charged the Preceptor a muddy little combat may have taken place and I may have interrupted [I really should write these the day after]. 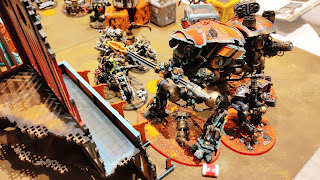 As the dust settled the Lancer had fallen, despite rotating Ion Shields for a 3++ save in combat. Alongside, the Preceptor had taken 4 wounds. Only the boss of the Bikers remained of the Ork push. 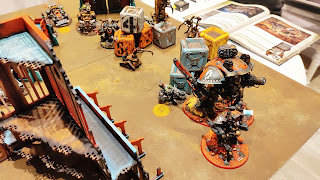 But he couldn't survive, either by attack from the Knight or morale. 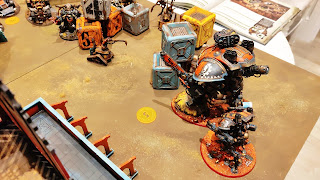 With the Orks gone the second wave of the green tide were free to push forward. Again, more shooting from the Scrapjet and other Speed Freeks whittled away my wounds and left the Knightsw even more vulnerable. Despite prioritising mostly defensive Relics and traits they just couldn't shrug off the weight of fire. 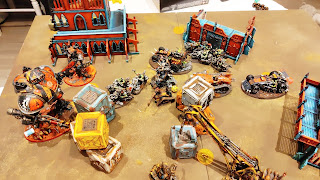 Even the Goffs incredibly bad shooting was eased by 6's causing two hits. Ghazgkhull himself has crazy rules with his guns that mean anything that fails to hit and wound can be re-rolled. Add to that he can take no more than 4 wounds per phase and there was no way i could kill him in a turn as I don't have any Psykers to dish out wounds in the Psychic phase - there's a point Imperial Knights need a Psychic unit - like a court mage. The Adeptus Titanicus have Psi-Titans why not Knights? 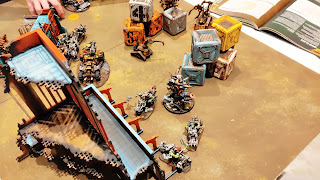 So, there we go, tabled again. At turn 2 it was 25:6 in Ben's favour but being dead it was all over for me anyway. It was relatively quick for a 1,000pt game so we had time to set it up again. I did have a Preceptor and 4 Armiger list instead, but the only variable we changed in game 2 would be I went first...
Posted by 40kaddict at 12:00