Built and based for a while now it felt about time to add some paint to my Warrior to Hive Guard conversions. Even if it was just a basecoat it's one step further, one less thing to do. 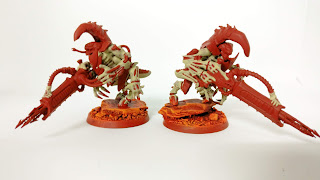 It's a tedius job, something I used to make so much easier by undercoating them bonewhite and filling in the reds. Now I seem to start with the red - the least representative colour on the model and try to be neat with everything else, not to mention I cover up most of the red primer anyway! 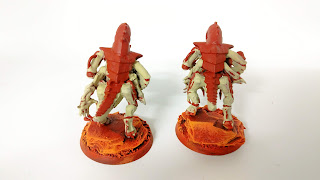 As you can see the bonewhite basecoat is pretty ropey but I'm fine with that, it;s getting two coats of wash so doesn't need #2thincoats In fact any paint showing through the base just adds more texture ultimately. 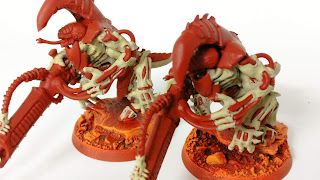 The Tyranid Warrior was up next. No doubt I'll try and treat these as a unit for painting purposes. I've actually fished out my existing Warriors and Hive Guard and will look at any potential fixes. 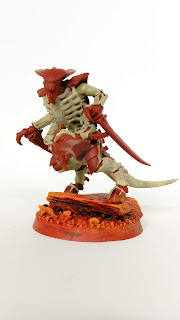 Certainly some base edges have become a little chipped but I'm also painfully aware that they're still afflicted with Citadel Purity Seal frosting. Maybe not now but I will definitely one day re-paint the red fleshy bits that are are damaged and I know I can do the chitin much better now so I'll probably repaint that. 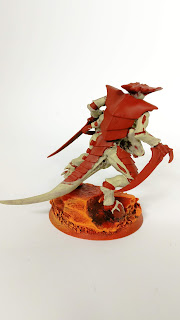 The bone colour only needs additional highlights but there's no urgency just now. I've lined up the five Devgaunts to 'bone up on' next and then the Rippers. All of these are just inbetween things - tasks that need doing but in themselves are tedious so if I fit them in among other projects when I finally focus my attention it'll just be the fun bits that actually feels like painting, not necessarily like putting paint on, if you follow. Otherwise I'll be tackling my Blood Bowl Ogre next...
Posted by 40kaddict at 12:58