Blackstone Fortress - The Empyrean Strikes Back

The planets aligned and we managed to arrange a suitable night for my gaming buddies and fellow #warmongers to have another crack at #BlackstoneFortress. Unfortunately time did not help us in remembering the rules, it also meant we spent a considerable time discussing Star Wars - the Rise of Skywalker and various merits [and demerits] of the entire Star Wars franchise. So it was like an hour and a half before we rolled any dice in anger!

Most of us met our painting requirements, but Ben couldn't quite finish the Ratlings and his Negavolt Cultitsts are just basecoated, but they weren't needed and a lot of his paints have dried up so it was an uphill challenge. However, worth mentioning we were at his house and there was a particularly generous spread laid on so - 'swings and roundabouts'.

Liam brought some Poxwalkers and Typhus to stand in for Cultists and Obsidius, unfortunately he'd planned to bring some of his other Cultists so unit weaponry would have been more accurate but he mixed up his figure case. Regardless the game looked significantly better, if a little too dark now! 😎

On to the game and before we entered the maglev we had a pre-game encounter where we had to bash down the doors of another maglev and we would gain a discovery each. All we had to do was 12 damage on 3 attacks each. Because I was 'inspired', thanks to Liam trading my 'hidden co-ordinates' hidden agenda I managed to 8 damage on my own - not bad for a feeble sanctioned mutant. Liam finished it off and Otty and Ben gave us hearty encouragement. Liam discovered his hidden agenda item in the loot and was immediately inspired!

Having entered the Fortress everyone else got to move before me. There were 8 cultists in the middle, 6 in the top and Obsidius Mallex and another 6 Cultists on the left. 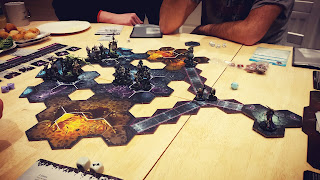 All of them were in cover and we wasted a lot of actions trying to kill them but the cover prevented any damage -we had not remembered you could 'aim' for an activation to ignore cover. The Cultists themselves knew how to aim and certainly some damage was done to us. 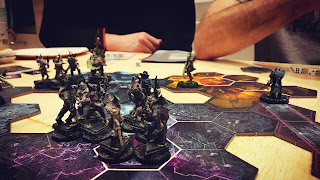 But for the most part because they were in cover they didn't really seem keen to leave it. I used my Mind Control power to force the Cultist leader out of cover and blasted him to pieces with my 3rd Eye. I killed another of his mob and raised my force field around Janus and I for protection. Meanhwile our Kroot friend had set a booby trap in the choke point in front of the warband at the top. 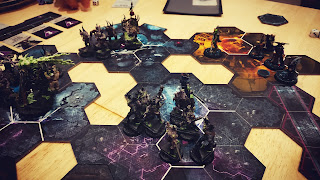 Janus managed to sprint across the board and activate all sorts of duelling skills. 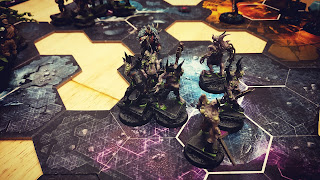 Taking out half of the cultists set before him. 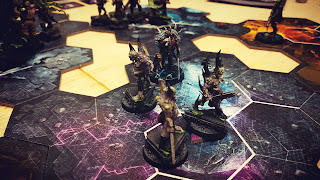 Dahyak Grekh also got in on the action. 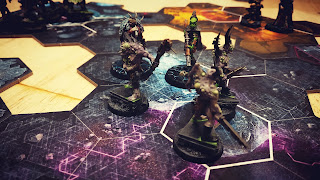 And managed to wipe out the remaining foes. Meanwhile I was able to Mind Control the leader of the second band of cultists and moved him two space directly into the Kroot's previously laid booby trap. He was killed in the resulting explosion 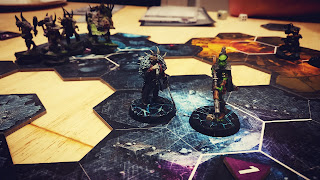 Dahyak Grekh advanced on the remaining cultists. However, we began to see some movement on the other cultists and they swiftly followed up to support their brethren. 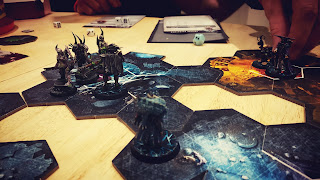 Dahyak, took all four wounds [and we subsequently struggled to understand how to play this part of the game]. Janus stepped forth to take revenge on the cultists... 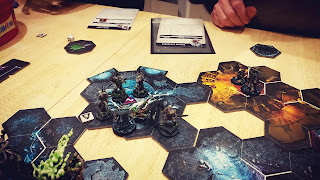 and with the support of the Ratlings and my 3rd eye we removed them from the board. 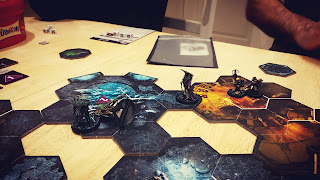 And then we realised we'd not been giving Obsidius his two goes on the activation table, doh - well vagaries of the warp and whatnot - we'll get this game eventually. Most of the damage was put on me [randomly] and I took 4 wounds. 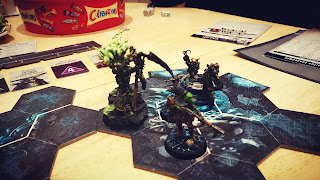 In return Janus did everything he could with his extra attacks and managed to take all 12 wounds of the Chaos Lord, just! Liam was mightily impressed with his feat of duelling prowess - the final double crit being particularly impressive! 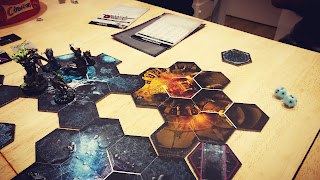 With their leader gone it was nought but to clean up the remaining cultists and we would return to our respective ships for re-supply and trading. 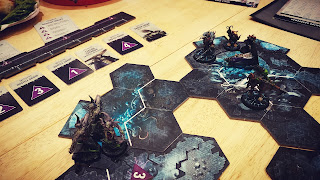 OK, so we're still learning the rules and given the 2-3 rulebooks you keep having to flick through, granted thin ones but even so it's easy to miss something. Or, you get referred to another book which then refers you back. Not to mention it's our second game and over 6 weeks since we last played. We definitely remembered some of the rules and new things weren't quite right, it took a few turns to get on track but maybe next time it'll be error-free.

Anyway, great laugh, really enjoyed it. Bring on our next adventure.