With some concerted effort I was able to finish the conversion work on these two and add the base material. 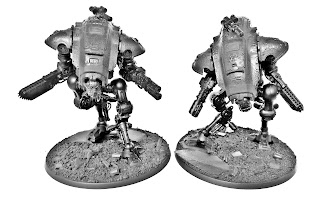 However, as they'll be painted in sub-assemblies it's somewhat a misnomer to describe them as 'built'. All the armour pieces were primed Red Oxide, while the chassis was matt black. 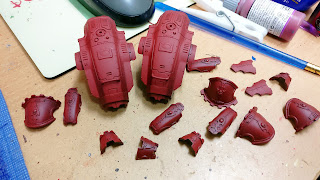 I held a piece of card in front of the legs so I could prime the base red too. Then it was stippling Vermillion onto the red armoured areas. 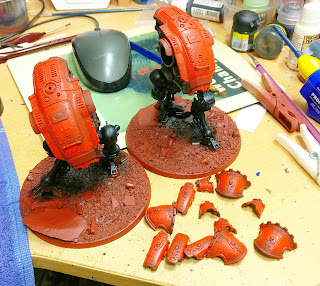 I ended up using a sponge to do this rather than a paint brush as I'd had a little more success in creating consistent texture with it on my Dark Talon. Washes will be next on the red areas but before all of that i need to do all of the metallics, which I should probably have done before the red. 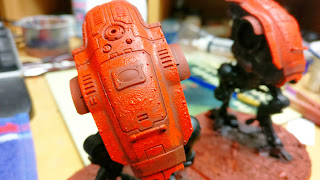 I honestly thought I painted over the Vermillion with Khorne Red on my Cerastus at this stage but it appears that wasn't the case. It's handy having that reference to look back on - the purpose of the blog afterall and something I often fail to take advantage of. 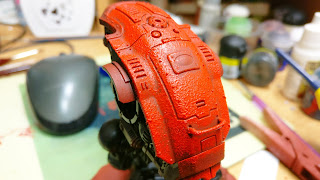 Armour plates are also done, not sure why they look less orange than the previous pics but it'll be Warplock Bronze on all the trim and the chassis next. Then the rest of the brass/bronze effects as usual and I'll wash the lot in one go with sepia and then Strong Tone. 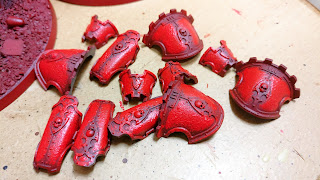 I get the Big Build Big Gamboge Stamp of Approval for building, even if there are still bits to be built...