As mentioned in my Hierophant post the Warglaives have taken most of my attention since Forgebane arrived, which was to be expected really. These two beauties can provide me with a Super Heavy Detachment alongside my two Knights so it was imperative they get a head start. I got the bodies built up. 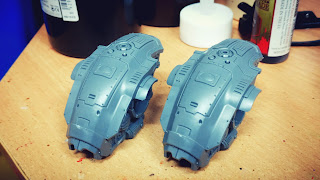 Did a lot of the weapons and hips. I eventually magnetised the weapons and arm joints because we know those new weapon options will be sweeeeet when the proper Warglaive kit is released. 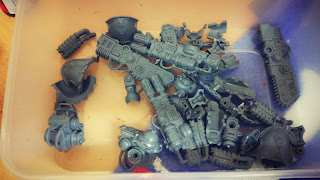 And then the big delay - the pose. In reality these are not the poses I was after. I wanted something more full-tilt motion, even to the extent of having one leaping off a shard of slate. Unfortunately the hock [the reverese knee joint] was problematic so I opted to just 'manspread' a bit and clumsily greenstuff some extra pipework between the hip joint. I also had to add some extra metal rod to the piston connecting the pelvis to the inside leg. You can also see I decided to add sprue to the waist ball joint so I could 'lock and key' the body to it.

Best laid plans - I had to hold the body on the left as the ball joint stud provided so much movement the body won't stay upright. I removed the sutd on the left Warglaive but it's still free to move and there needs to be some friction to keep it in place, I may have to glue it if I can't solve the problem.

As you can see one of these Warglaives has been very naughty and daren't look us in the eye. 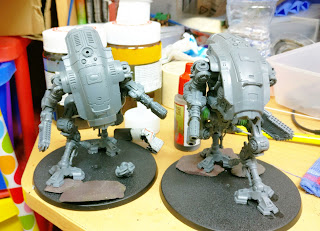 Basing next, solve the waist problem and prime them, busy, busy lots to do!