If you recall in the last Armiger post I reached a hurdle with the metallics and promptly shifted to the Hierophant. Alongside my Razorback [shading] these three projects all have elements that are far from unpleasant but they always retard my progress somewhat. The Hierophant is at the highlight stage and I figured the aspect preventing progress is just the scale of the task ahead. Really it's just a lot of striations on the Chitin and the only way to resolve that is just getting it done. 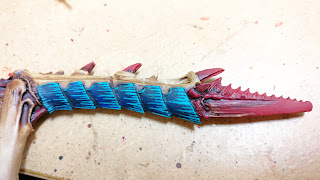 So, both sides of the rear shin of one leg took half an hour to do. This is a metric I can begin to use to my advantage - if I create a task list for it's completion. Having a timeline for these sorts of big jobs can be really helpful, particularly as I don't have a deadline or target for it to be completed for. Knowing how long something takes reduces uncertainty and can help demistify the task at hand, making it less scary and easier to approach. Given I have to do this again on the other leg and yet again with the second highlight on both knowing that's 90 minutes work. 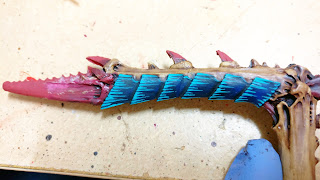 I can then decide how that's split between sessions. It's certainly achievable in one concerted effort but also two or three depending on when I get into the shed and how focussed/relentless I am in getting it done. As you can see from my record below a session is usually an hour, so I've been at this for at least 10 hours so far [couple of half sessions in there] 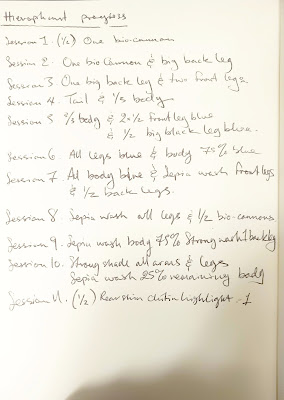 It's also worth noting that those were just the shin piece of six plates, both sides; lets not forget there is still the thigh plates, this is what I achieved last night in almost one session. despite the muscle memory after a bit those striations get a bit more wobbly/chunky so more than an hour at a time can be counter-productive. But I had momentum at this stage and decided a little misdirection would be helpful. Having only revisited that post for Old Stuff Day it was a handy trick, although I'm not so sure its technically misdirection in this instance. I painted the central line, edges and any raised 'thorns' on the reverse of this thigh, the other thigh and both forelegs 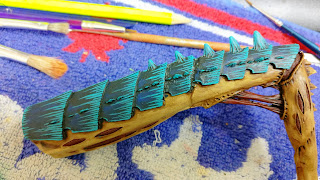 Now it doesn't feel like much but if that took me 15 minutes to do that was 15 minutes that it was always going to take, even if it was absorbed among completing a whole plate or leg. Everything about painting this Hierophant currently is 'bread and butter' things that have to be done and there are no shortcuts or tricks, just creative labour. That's not to say it's unpleasant, it is what it is and a project of this scale ends up being a monumental task, thankfully it's not a chore.