You're all going to have to bear with me at the moment, chitin highlights seems to be a theme to these posts but unfortunately there's no getting away form it. As a record of progress it's helpful but I appreciate it's not a captivating update. However, these four carapace plates took over an hour to do, I was utterly spent and demotivated at the end of it as I envisaged the remaining plates taking forever. 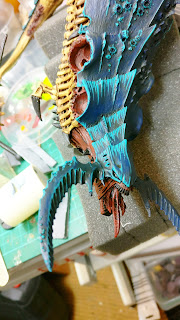 But it would appear I was just trying to be really neat and tidy as my next session managed to do three of the biggest plates, with cysts and one side of the big vent and the side vent too. Again, this will be helpful in estimating time to do the other half of the Hierophant and then repeating it with second highlights. 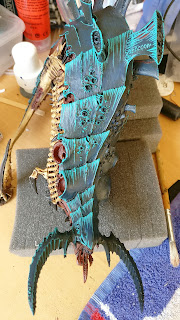 There are still the spots to do, which will help bring it all together as it currently looks a little spartan at the moment. The irony is that despite the tedium and 10-20 sessions I envisage remaining on the chitin once it's done the Hierophant is almost complete. After the turquoise and bone there's not a great deal left to do [there is but I'm going to stick with my perception because it's optimistic]. 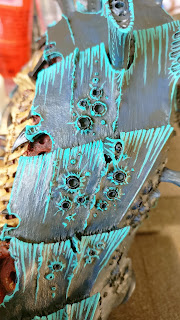 I followed up the 3 big plates with two more, the right sides of the dorsal vents along the spine and then both ventral [?] vents on the sides. 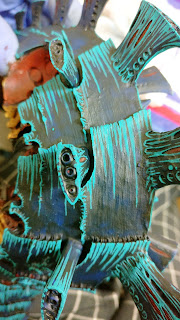 I think I got quite busy with the striations on the dorsal vents, not much room for spots, c'est la vie. Which leaves me 5 or 6 significant carapace plates on the back with 7 dorsal vents and then quite a few little plates down the tail. 2 to 3 more sessions to complete this half of the beast and then I get to repeat the process on the other side! 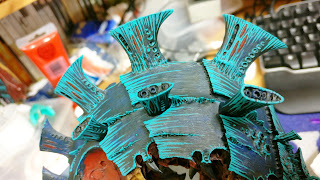 I might do a bit more shading on the Razorback before that, just to stave of the tedium. I've already done some, but foolishly stopped about 75% through. But the Biotitan is definitely a slog, it's not beating me though and I'm not disliking the process but currently the reward is the progress I've achieved not act of doing it.
Posted by 40kaddict at 12:10