Despite feeling confident to leave pod 1 well enough alone I felt the urge to add numbers. The original plan was awesome massive numbers on the door but I threw that idea out the window when the chapter markings looked alright as is. So instead it was numbers on the top fins, but how to make them consistent? Decals were the obvious choice but aside from not having enough vehicle decals to do all five fins I know I can paint that gothic swirly number 5, it's just it tends not to be consistent size wise. So I created a tiny stencil [without the line up the middle]. It took me two goes to cut it out of paper without destroying it.

I managed to do all five of the fins but you can see by the last pic [actually the 5th fin] it was becoming less effective. I'm not sure if this was due to application or dampness in the stencil but I definitely could have taken it down a notch so I didn't go quite as rough as it turned out.

But not to worry, because with the 5 in place I easily neatened it up, which was the plan all along. Ordinarily I'd have pencilled it in first but again it;s about being consistent. I also went round with some Caliban Green on the edge to neaten up any overspill. 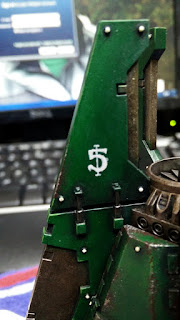 Not the same 5 but each number did have subsequent pure white highlights. The end result is consistent across all the fins but hindsight I think it would look much better as a white circle with green 5 in the middle, although I'm sure the 5 would have to be smaller for it to fit and I doubt the stencil would be possible at such scale, extremely difficult to cut at the least. 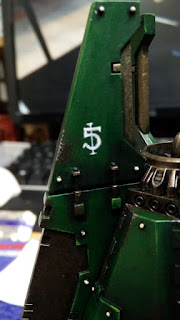 Anyway, this is what I used, cutting out the five on the top row, although the actually fin shape and measurements are not correct so I had to fudge it a bit in positioning.
I now have to decide if I'm doing the company symbol on the opposite side of each fin, by which I mean I have [annoyingly] decided to paint the company symbol, I just need a circle stamp on it at the correct size before I then fill it in.

Meanwhile Pod 2 got some love with the door edges orange in just two coats. I now need to do some extra shading and final green highlights. 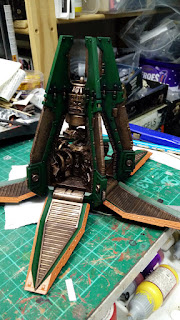