I'm not sure but it may well have been nearly five and half years since I last worked on my Dark Angel Drop Pod but I first mentioned it in the February of 2011 as it was a Christmas present from 2010! My original plastic crack dealer Pete got it for me so it deserves some attention finally. 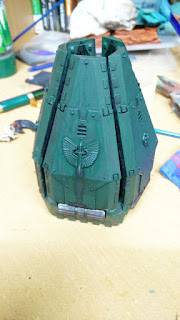 Not just because it's been so long but because it may actually be worth taking and even if it's not used in any list it'll make some nice terrain too. Having left it at a black wash stage in 2011 I thought I's add a bit more shading in all the cracks and crevices. 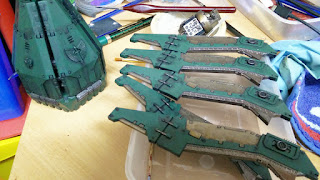 Mainly because I'd already done the same on my second Drop Pod that I got in a trade with [the other Pete] PeteB. As you can se ethis one is already built so I'm going to comparepainting them by components and as a whole. This had been primed, painted red and then re-primed black. I then added an Angel Green primer and then with the shadows. 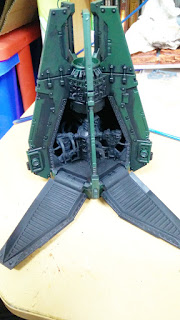 A quick coat of some of the last of my Tin Bitz and it's getting close to Pod 1. 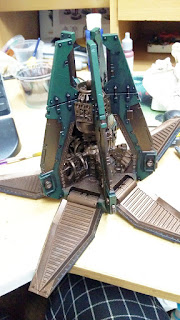 There's a lot still to do but this is my primary goal at the moment. I know how infamous they ar eat breaking people, notorious for their difficulty/monotony, hence why I was reluctant to jinx it. I'd started alongside the Acid Spray but now I can devote 100% attention to it. Lets get the out of the way and off my To Do List finally!
Posted by 40kaddict at 12:09