Although this new project doesn't [yet] fill me with dread I have already observed that monotony will be the biggest factor in how it progresses. You have the five pod fins, but you need to do both sides and when you're actually doing two pods that's 20 of these still to do and you haven't even looked at the door petals! No doubt the door will then split up into the top, middle and bottom left and right sections, again multiplied by 10! 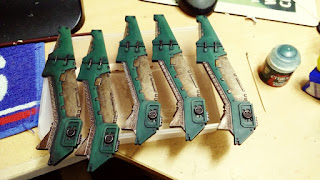 Anyway, as you can see above I managed to do the highlights on the first five. I now need to do the shading on inner edges of the four newer ones, then it's the other sides. What's now apparent is it takes about a 60-90min session to highlight five [unbelievable but true for me] so I've three more sessions to look forward to - yay! At least by having that in my head the task seems more manageable but even so it's a good enough excuse to take a night [or two] off.

The knock on effect is progress is very slow [which does no favours for the blog] and I'm thinking that having this separated pod will feel easier to paint than the pre-built one. I'm also a little underwhelmed by the highlights. They've been drybushed Waaagh! Flesh for the most part, which doesn't really work on flat surfaces. I'm then drybrushing some more Caliban Green on to blend it a bit more and then I'll get round to the black. It's unfortunate that a lot of the original Orkhide and black shading are being over painted now but you live and learn.

Anyway, slow but steady. Fingers crossed I can get the next three sessions in without imploding. I'll feel much happier once the fins are done.
Posted by 40kaddict at 12:34