Table draws had put me up against Anthony Chew and his 15 bikers, something Ben had suggested was a good draw for me [how little he knew]. Unfortunately traffic had been horrendous on the Saturday, we'd only just made it because they'd closed junction 25 of the M6 because someone had skidded in the random slushy conditions that morning. The end result being Anthony hadn't arrived so I was switched to play against Mike Bolton and his Necrons. Anyway, the ETC format is full of scoring elements so I'm not sure how my report will reflect what went on but I'll do my best.


The low down:
Mike started with his line of Wraiths, warriors and Destroyers, with nine Tomb Blades behind that pale building. 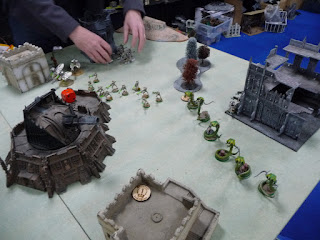 I fortified the Hive in my usual deployment [don't worry I'm going to start doing different things in future, it's about time for a change] 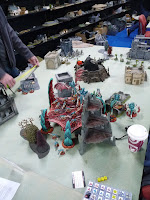 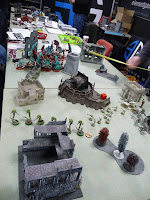 The Destroyers got off to a good start, getting three wounds on the Tyrannofex, that really stung. 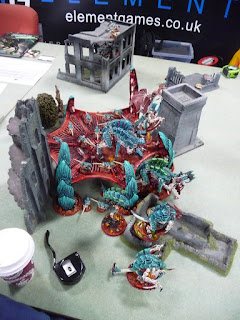 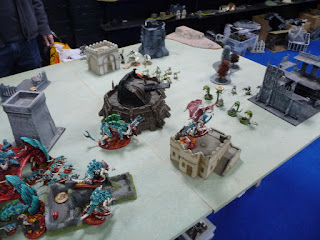 In retaliation I managed to take out just two Wraiths with the Flyrant, while Mike had positioned them just out of range from the Carnifex [being lazy] and even the T-fex. 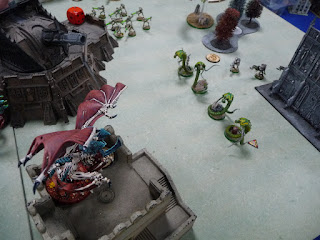 Turn 2 and despite the -1 reserve role all Mike's reserves arrived. The Deathmarks appeared and went for the biggest beast in their sniper scopes. 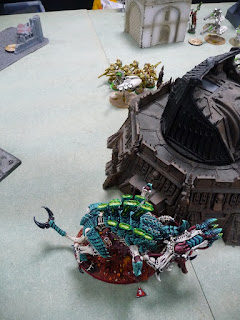 Killing the T-fex for first blood. 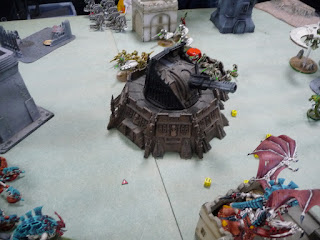 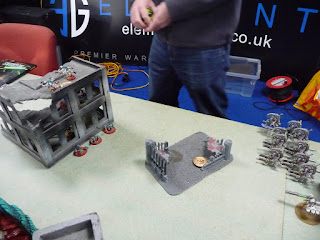 That flank was going to roll over, so I had to think about abandoning it with just the Broodlord and a few stealers to try and save. Meanwhile I got the rippers up to the top floor, hopefully out of sight to hold the objective but not be shot/assaulted. Unfortunately I found out my understanding of their Instinctive Behaviour rule was wrong. I was under the assumption Fearless meant you ignored the lower 1-3 role on the table but it appears that's only on specific IB charts and even then if it's a unit of more than one model then they can still turn on each other in 'Feed' - so my brood of 2 Carnifex are now at the same mercies [honestly I thought this Codex was bad, I'm still finding out just how bad it really is]. 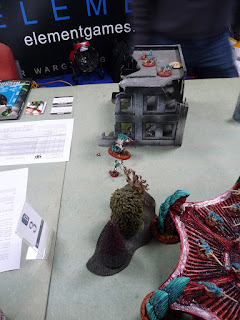 I moved a unit of spawned gaunts into the centre and the Carnifex still wouldn't break into a run.The Flyrant targetted the Doom Scythe but only put a Hull Point on it. 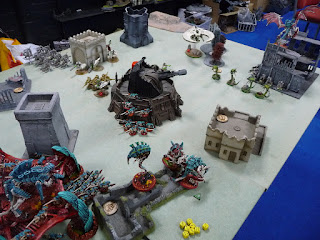 The Broodlord just couldn;t get away from the Tomb Blades, his retinue falling by the way side and suffering two wounds also. 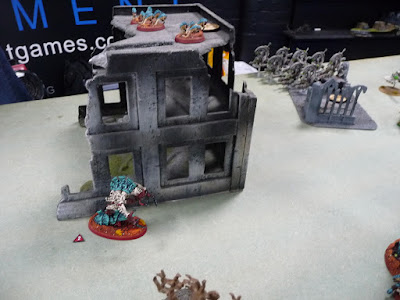 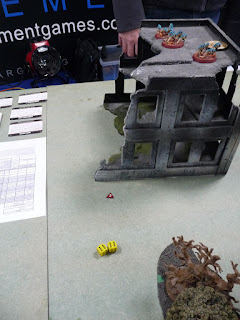 The Flytant swooped behing the Doom Scythe but the Carnifex tried to bring it down first so he could switch targets to the Wraiths if necessary. Unfortunately the Carnifex managed just the one Hull Point so he had to finish it off leaving the newly arrived Hormagaunts and Spore Pod painfully outnumbered by the nearby Wraiths and Immortals. 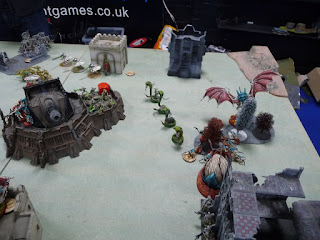 The Tervigon's Miasma Cannon tried to damage the Tomb Blades but with little to no success. 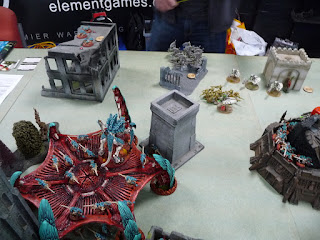 Carnifex and Malanthope were only halfway up the board at this stage. 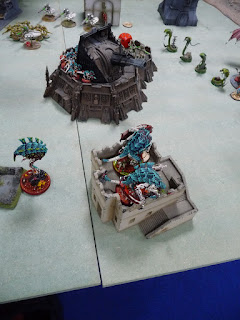 The Tyrannocyte got popped and the the Hormagaunts took cover in the woods. 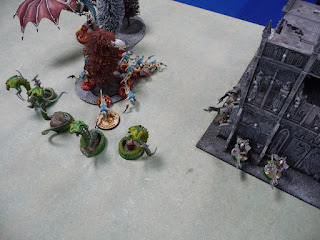 The Flyrant got down to his last wound, I think he may have been grounded at this point. 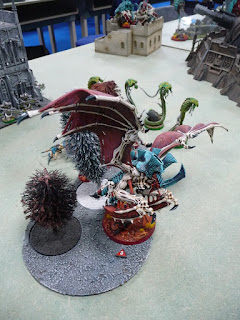 Tomb blades advanced on the Skyshield and the Destroyer Lord separated to take out the Rippers who'd started to eat themselves without adult Tyranid supervision! 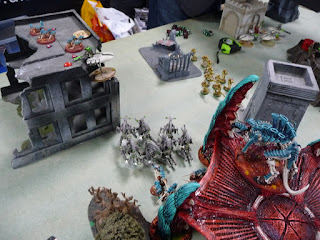 The flyrant managed to get a rediciulous number of overwatch shots on the Wraiths as they charged in, I think it was as many as 8, but Mike saved every one! He was obviously brought down by them and the game came to and end. 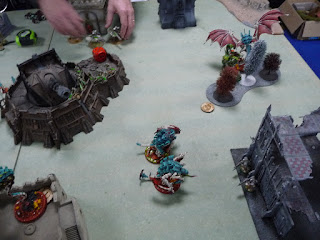 Final score was 16-4, unfortunately this was the only score sheet I remembered to photograph. So you can see what missions we made. 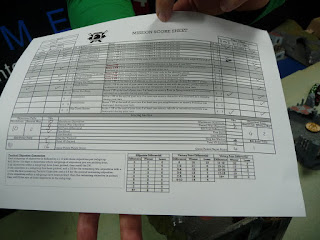 So I kept my record of never winning a first game, but more importantly it was a fun game and Mike was great to play against. I think he eventually came 4th overall, but did get up to the top table by round 4 so losing wasn't that bad really. Luckily I also managed to get a pic with him the next day, everyone was kind enough to conset to selfies, a tall order on the Sunday morning ;) . 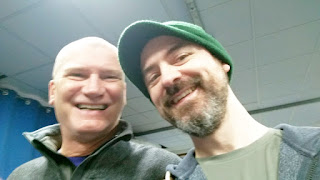