Dark Angels - what next?!

So you probably thought I'd be back on the Ravenwing Land Speeders... well by now you know better than that. Somehow the 'crashed Aquila Lander' pricked my interest. I thought this would be a one week job, get it all green and some simple metallics a few wires and job done... 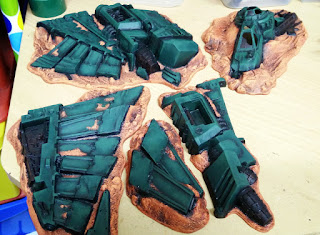 Having done a quick highlight with Caliban Green I did a second highlight with Waaagh Flesh. It's not really what I normally do with my Greenwing' but for this terrain piece I think it's fine. 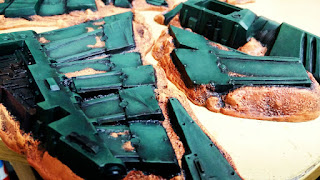 I then used Vallejo Goblin Green as a highlight. Once again it's an extreme version compared to the more understated nature of the rest of my 'dark' greenwing. 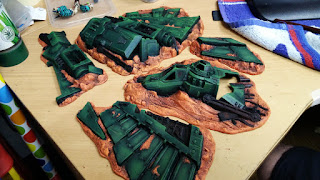 But again, as a terrain piece and something that needs doing I'm happy with it. 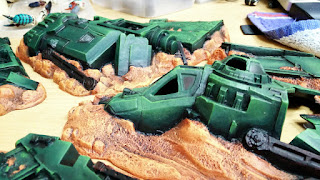 I also went on to paint the windows, although all this gorgeousness will probably be covered up by Tamiya Clear Red X-27. 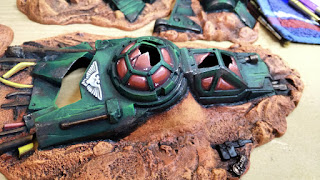 Now I'd done some sponged brown in places following Duncan's guide on WarhammerTV and then followed it up with Gun metal but although I thought it was pretty cool I splodged on some Typhus Corrosion to tone it down. 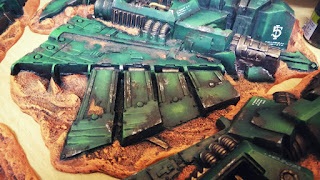 It may well have toned it down dramatically as I think only 15-20% of the metallic is still showing but I do think it's more realistic which is odd considering the rest of it is a bit cartoony. 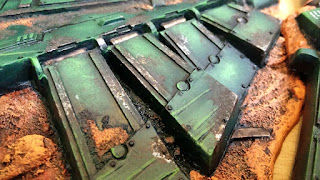 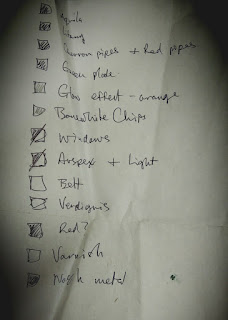