Firstly, I'll apologise for the 'good pics' I was in a bit of a rush and subsequently noticed they're a bit blurred. Still there should be sufficient to get you fix of my hobby goodness. 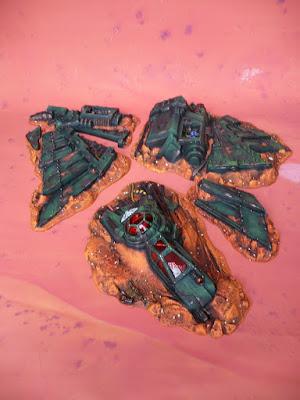 I must admit I was unusually concerned about the Tamiya Clear Red X-27. I'd liked the shading and highlights I'd already done and the initial coat stripped all of that effort away. So I ended up adding another coat of Army Painter Dark Tone [Badab Black] to shade the lower area even more then another coat of Tamiya Clear Red X-27 managed to bring the depth of colour I was after. 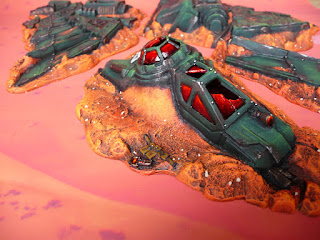 I also decided against Vergdigris, it just didn't seem necessary and rusting the damage was not going to work with so much orange 'dirt' already scattered on the debris. 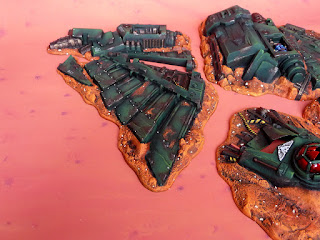 I went with blue energy cell, it pays to practice these things ahead of doing them ;) 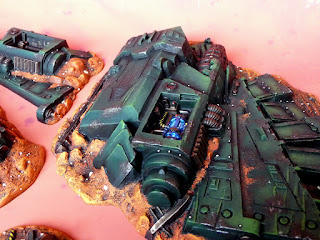 Again the gloss varnish just to add a bit more highlight and 'glow' effect was circumspect but I think while it's on the board the occasional reflection off it will add something matt varnish does not. 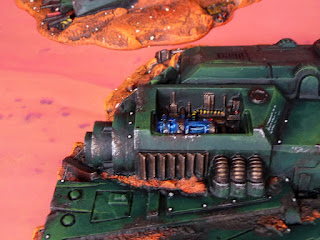 The company marking came out particularly well I think. 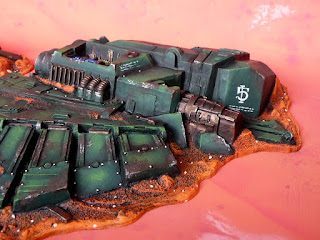 And the glass too, eventually.The original intention was to do it Tamiya Clear Orange X-26, which is why I bought it, but given the Nephilim/Dark Talon I went red for consistency. 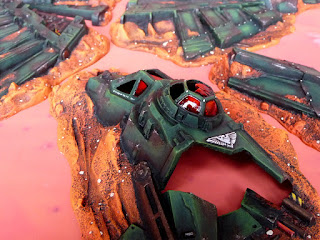 The glass turned out OK in the end. 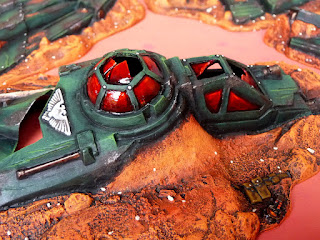 And the rest of the crashed Lander. 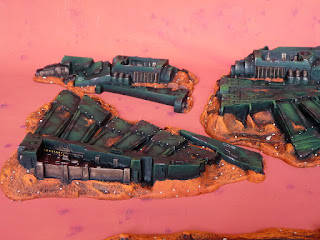 Another slightly blurred shot of the energy cell, I still have to paint up the removable one that was an objective in the Macragge set. It was originally going to be embedded in the ground on a 20mm base but as it fits in the other engine bay perfectly it would make sense to leave as is. 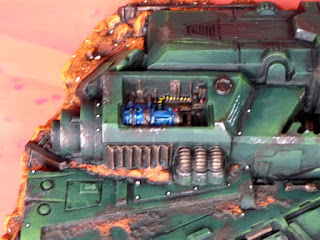 A while back when we held a tournament amongst ourselves I took this terrain and my board to Ben's he asked me if the Lander was complete, which obviously at the time it was not. He said it was really not good enough to go on the board in the state it was in so it was consigned to the box. I hope it now meets his standard, it certainly gets the big green stamp of approval from me - TO DONE!