Motivation and progress is currently at a nadir. My Land Speeders are stalled and the only real thing I've done is base these guys from Deathwatch. This is using my rubble mix and despite the rest of the Deathwatch set [the Cultists] being on resin bases I hope I'm able to match them all up. 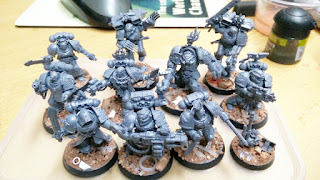 I followed up with a black undercoat and then usinga piece of card to cover the model Red Oxide primed the base. This is post Vermilion craft painting, the Red Oxide was really only to catch the edge of the base which is always prone to chipping and it's much easier to do my Heavy Red edging on primed Red Oxide. 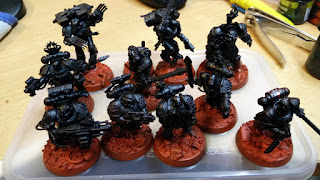 I watched Duncan's guide to painting the Deathwatch and I may well try and do very simple edge highlighting, no blending on these [like the Ravenwing]. The Deathwatch could possibly be used alongside my Dark Angels but their primary purpose is for Overkill, thus a different style of painting black wouldn't be a problem. I'll also be deviating from the tutorial and use the same colours I currently do so it should tie in tonally with the rest of my force. I just think they need to be painted quickly and if I do it simply but neat they may turn out quicker than normal. That said I'm really inspired by this picture to add weathering powders on them when they're complete. Not much else has it but it clearly works here. 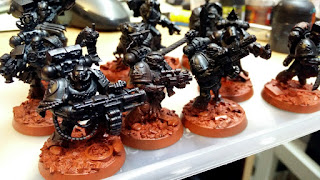 Overall though I think I've burned out just a little bit from all my previous efforts. The season is coming to a close and although I'm sure my Land Speeders [which should be my priority] could be done in the time remaining I've sort of sabotaged myself a bit. Not sure if I was subconciously doing it deliberately or it's just fatigue, either way time is running out on them and I think they're more likely to be completed very early in the next season than bow out of 2015/16 in style.
Posted by 40kaddict at 12:05