A while back PeteB and I had a second Deathwatch Overkill night, he wanted to go through all the missions as a campaign so we started from scratch again. 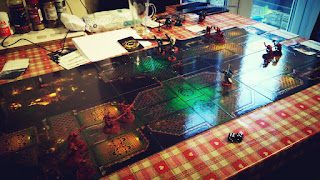 This time around it was a bit better and we managed to get more rules right:
I guess it pays to make some attempt to read the rules. 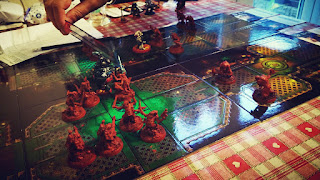 Anyway, Pete still rattled through the first mission with ease, I think this is the second mission where I had to control something just out of shot on the left. 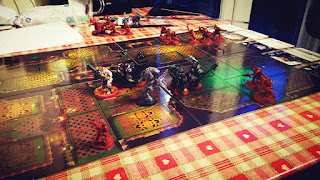 Instead of the painted cultists we used the undercoated game ones which has prompted an urge to crack on with them, an urge I'm currently ignoring! 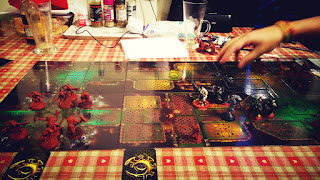 Bottom line this was another night of casual fun gameplay. As the nid player I end up feeling like a GM, really just there to put obstacles in the Deathwatch's path for them to cut through, I quite like it. 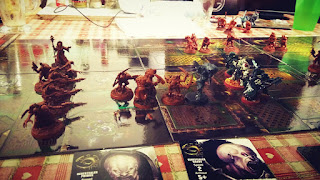 Ultimately Pete ended up in the last room, with plenty of obstacles 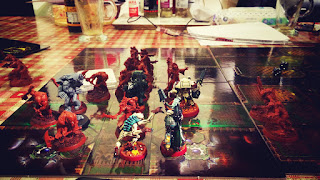 Which were summarily destroyed for him to capture the tech I was guarding. 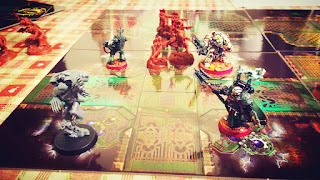 We've another game coming up this week we'll see how the campaing progresses.

Given the simplicity of Overkill and having sat through a rather tortuos Pokemon game with my youngest I 'forced' him to have a go one weekend. I knew he wouldn't be disappointed going Marines as every game they've won. I hoped it might prick his interest, he often wants to hang out with me so I figured he'd get that, we'd be doing something fun, just the two of us and he would be winning so much he'd get the appeal. Of course I was wrong, he was bored halfway through, wanted to stop and kill the remaining 12 Stealers the next day. I even caught him mouthing "help me" to his Mum when she walked in the kitchen! I guess that says it all. 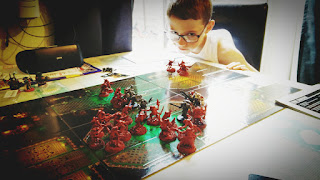 In fairness he did play on to kill the 25, he wanted to stop as soon as he had but I fillowed the same rules as with PeteB and played until the end of the game turn, meaaning he'd killed 34 by the end of the game! It was certainly more fun than Pokemon but I think I've learned my lesson, this games just really for big kids ;)
Posted by 40kaddict at 12:12