MMM! Lunch, a breakfast barm as big as my head! Bacon, sausages, fried egg with some ketchup thrown on after. I couldn't finish this thing it was so filling! 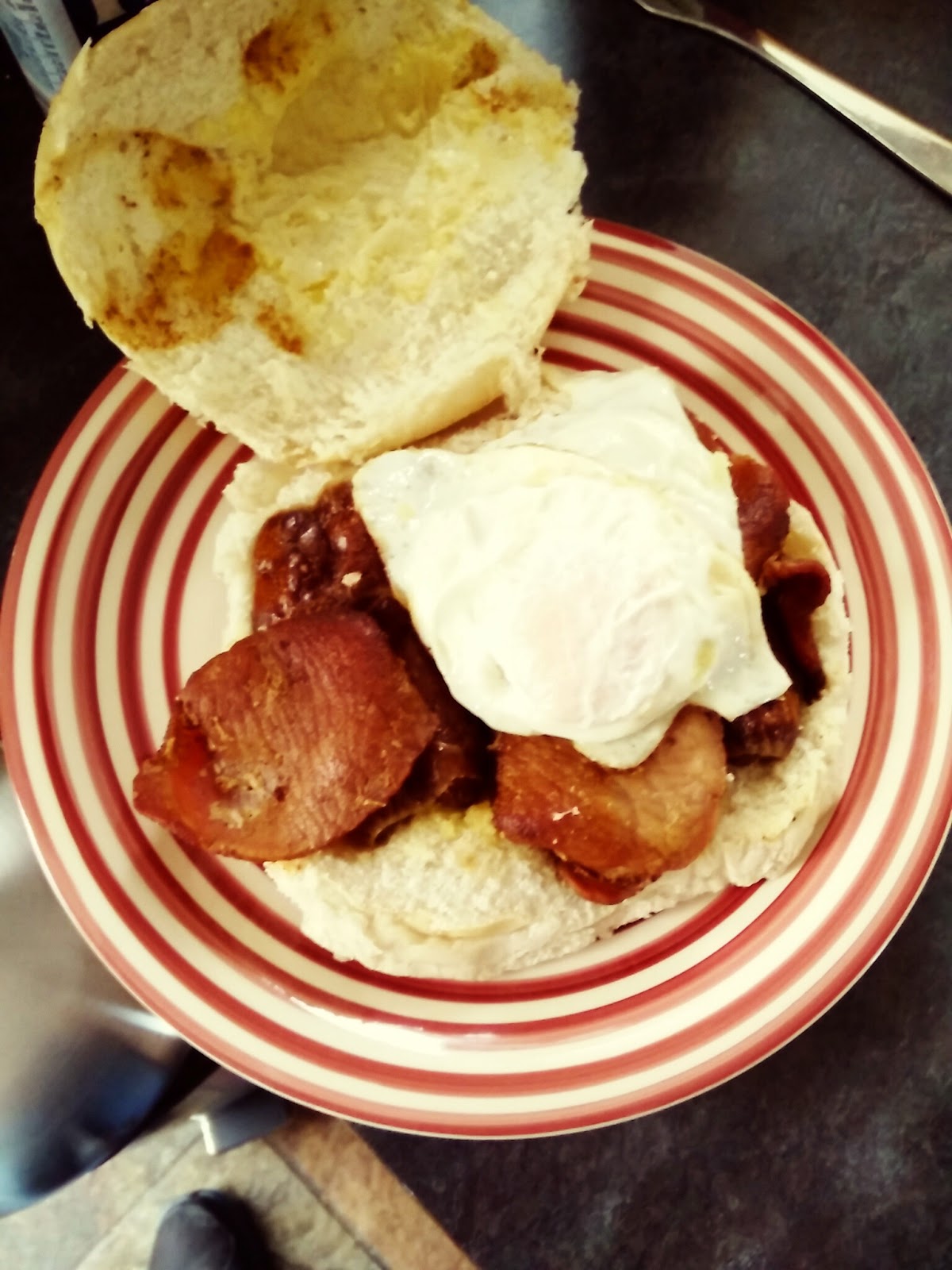 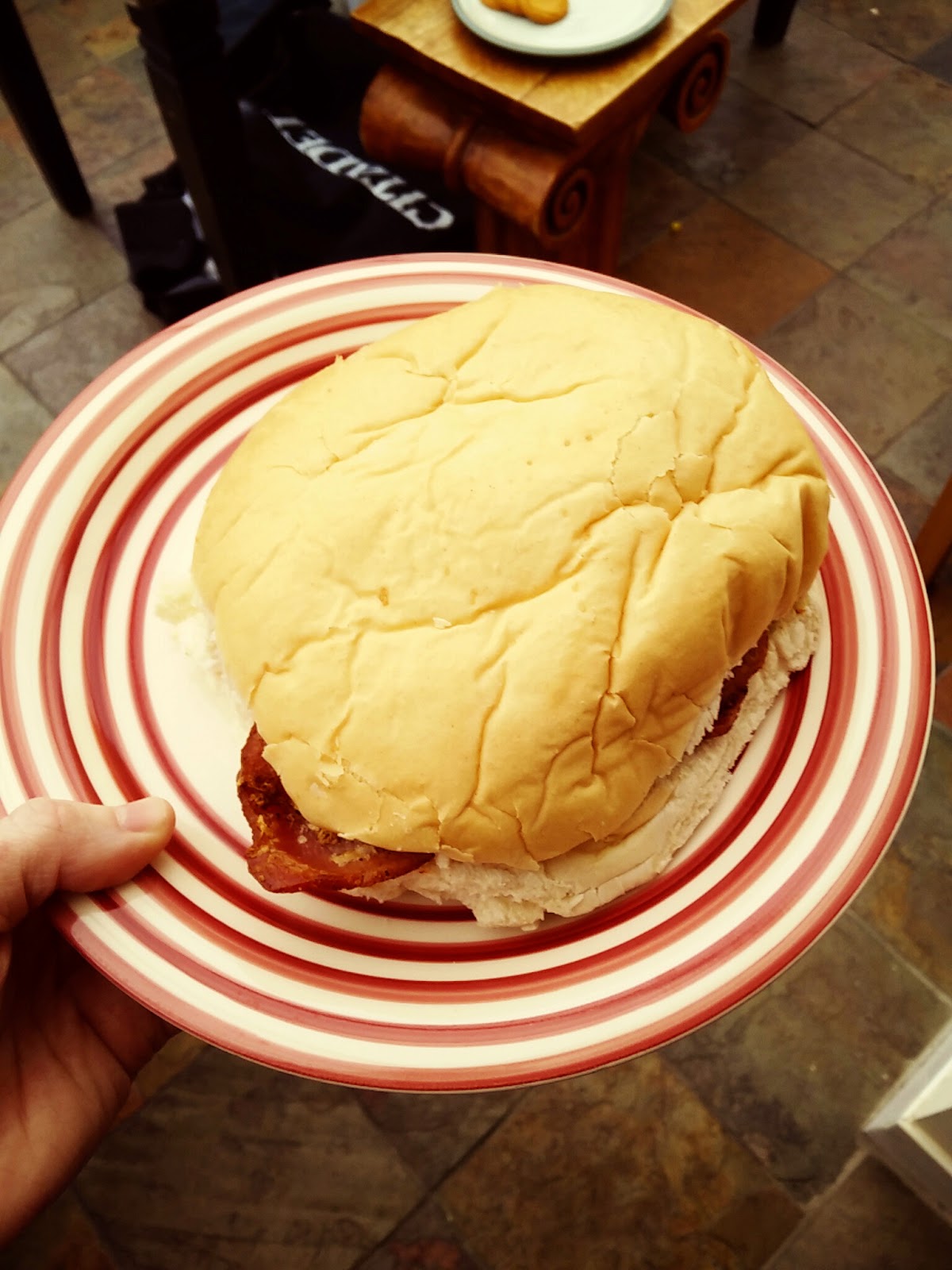 The low down:
I think I made Ben set up first, but got to go first. We kept Otty's objectives in place and as the Stompa was over on the right I deployed the Bastion as a fake. It's sole purpose was to be big in that corner, hide the Genestealers and the Flyrant. The Flyrant would then move off and then as the rest of the army was deployed to the left I imagined it would draw the Stompa away from that flank and the Bastion could generate VPs if and when that objective came up. If the Bastion was targetted by the Stompa then the Stealer were there to secure the objective. 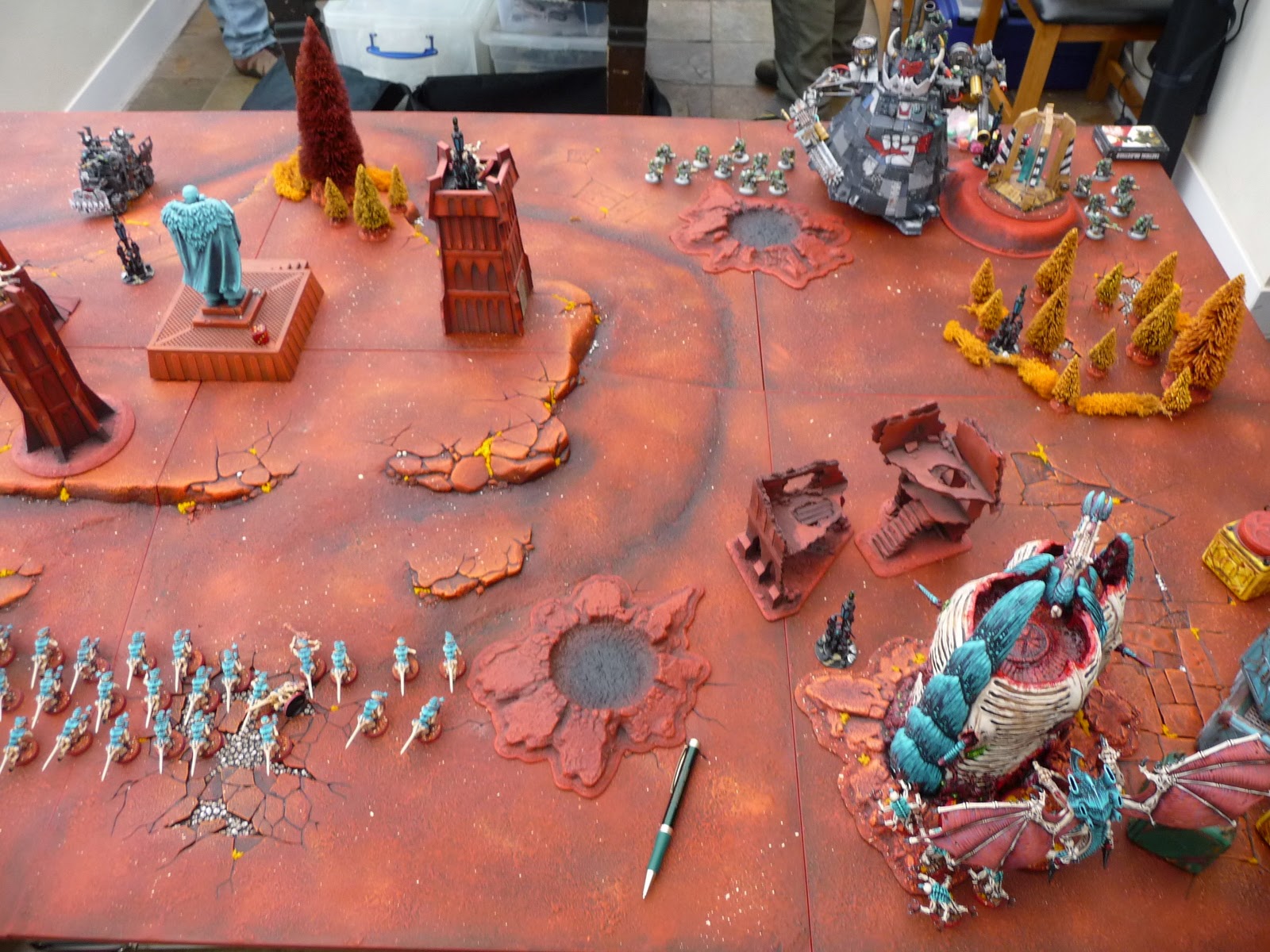 Meanwhile the rest of my army drew up on the left flank but I would move further left to avoid the Stompa leaving it out of position, although a 12" move isn't going to save me for too long. Anyway, I had that Trukk to deal with two. Oh, Stealers are in the three towers, behind the Bastion and... not sure where the last Brood is [outflanking I think] ... 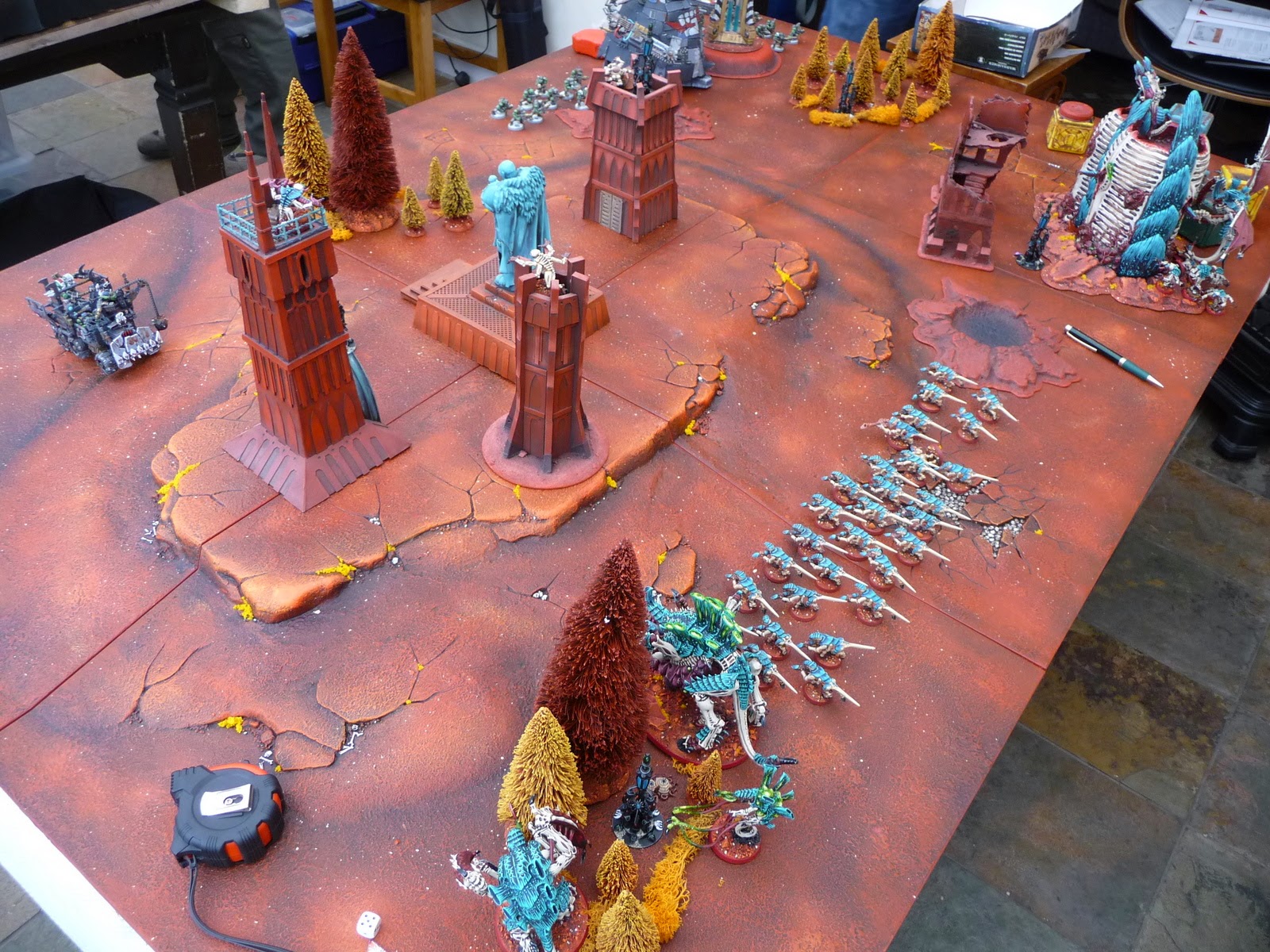 I believe they call this the 'refused flank'/'oblique order' I actually prefer the second name. Anyway, the flyrant swooped over to the left to join up with the main body while Gaunts and Tervigon headed towards the lonely Trukk. 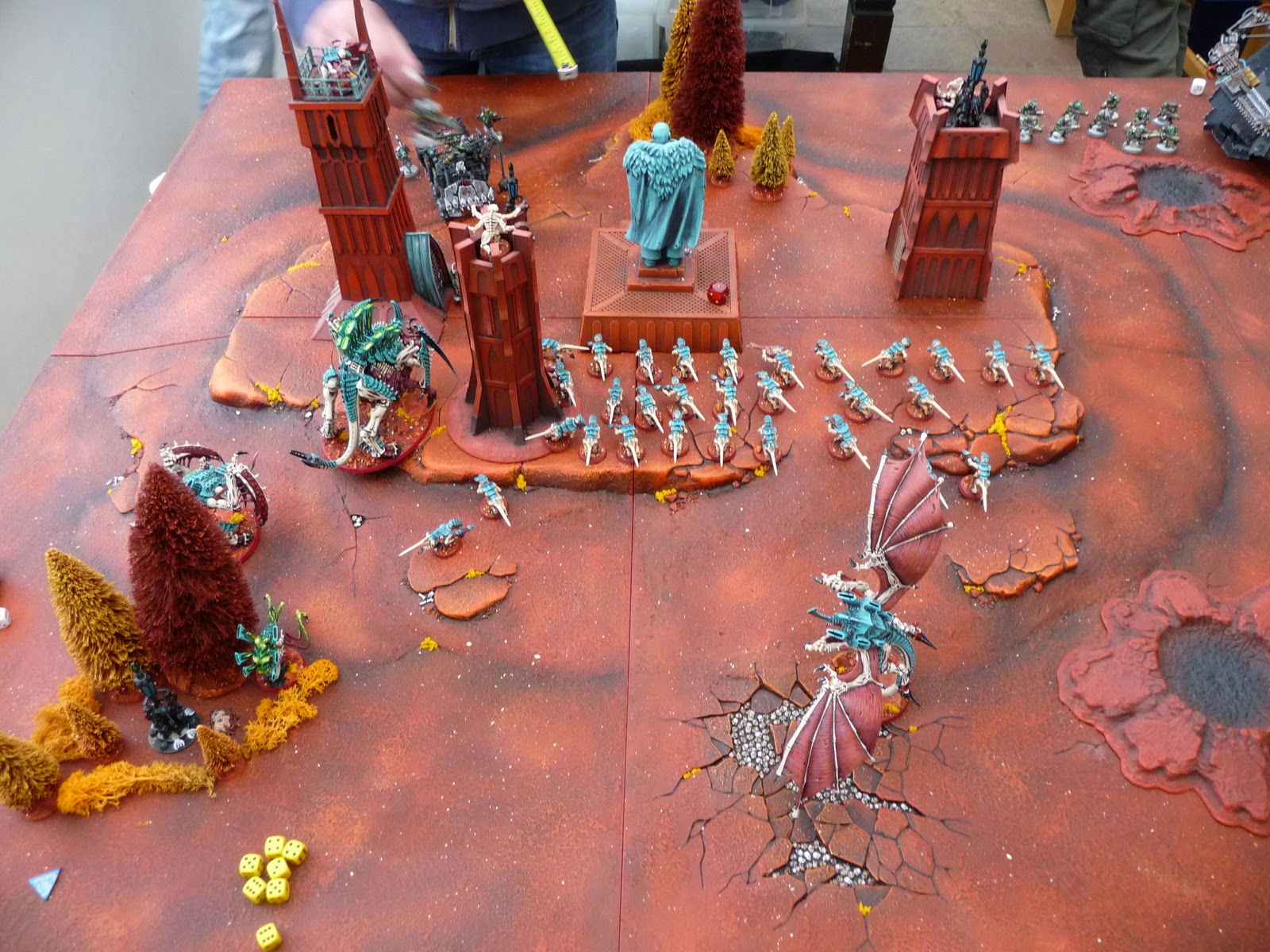 This may well have been a tactical blunder to think this was a vulnerable target as the Nobz and their Warboss leaped forwards... 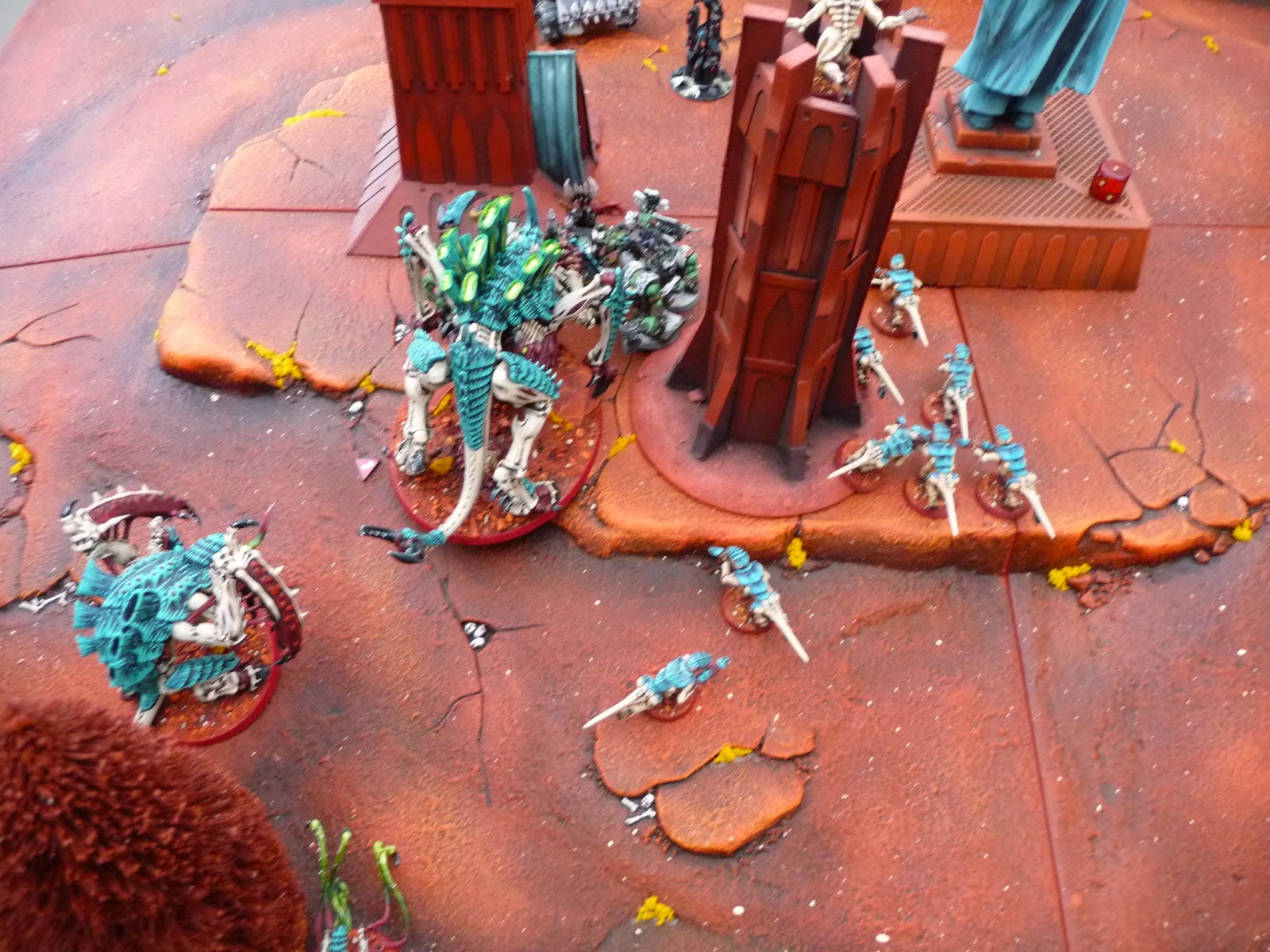 and promptly chopped the Tervigon to pieces. As soon as I saw them get out I realised it wasn't going to end well, and instantly regretted forgetting to spawn in my turn. I did wound one model but with 2 wounds each it was not enough to do anything at all really! Except lose First Blood I imagine. 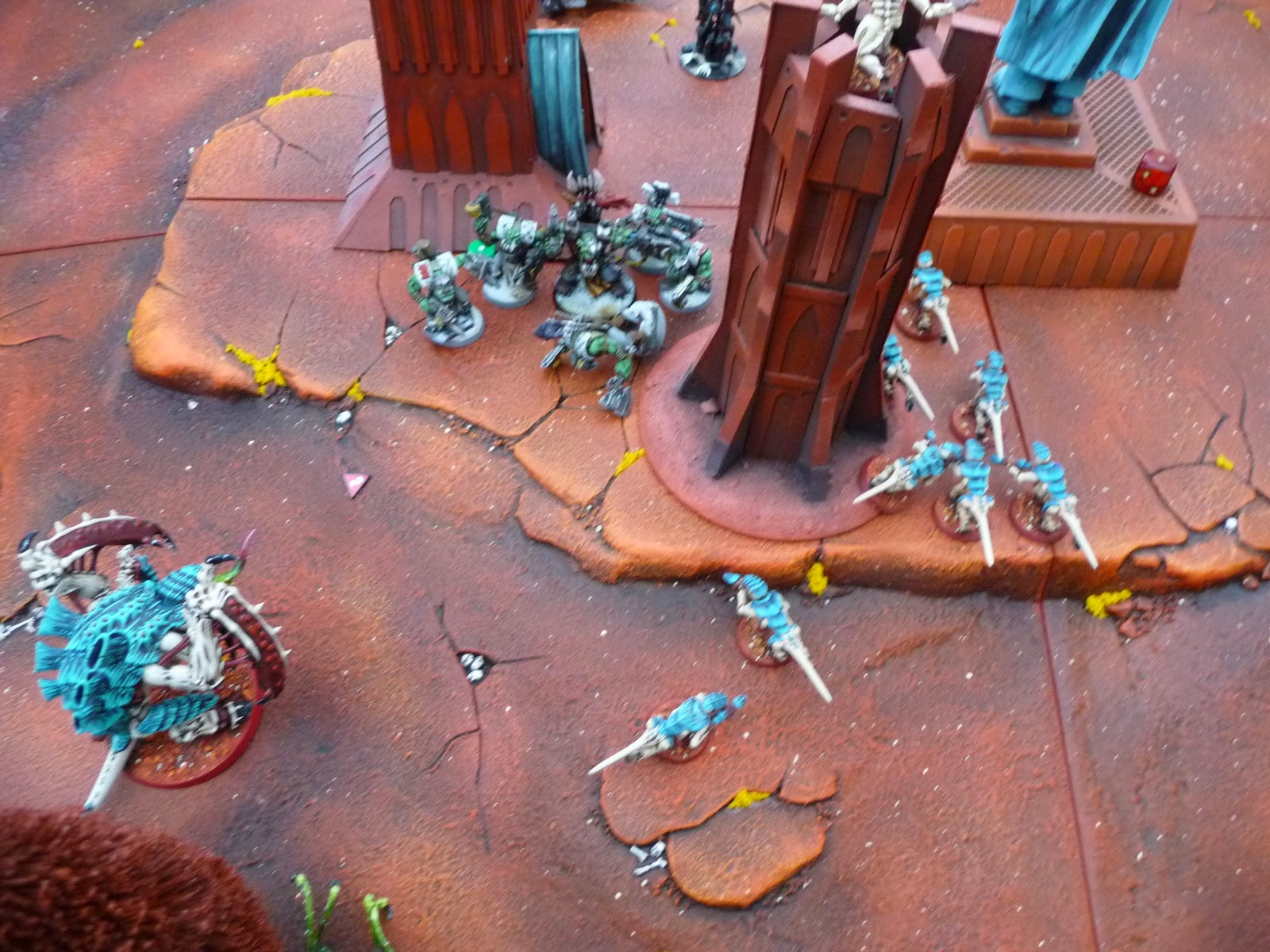 But the Carnifex was nearby, the Flyrant was in range to swoop over and add his Brainleech Devourers into the mix and the Brood of Stealers in the tower could mop up any stragglers. 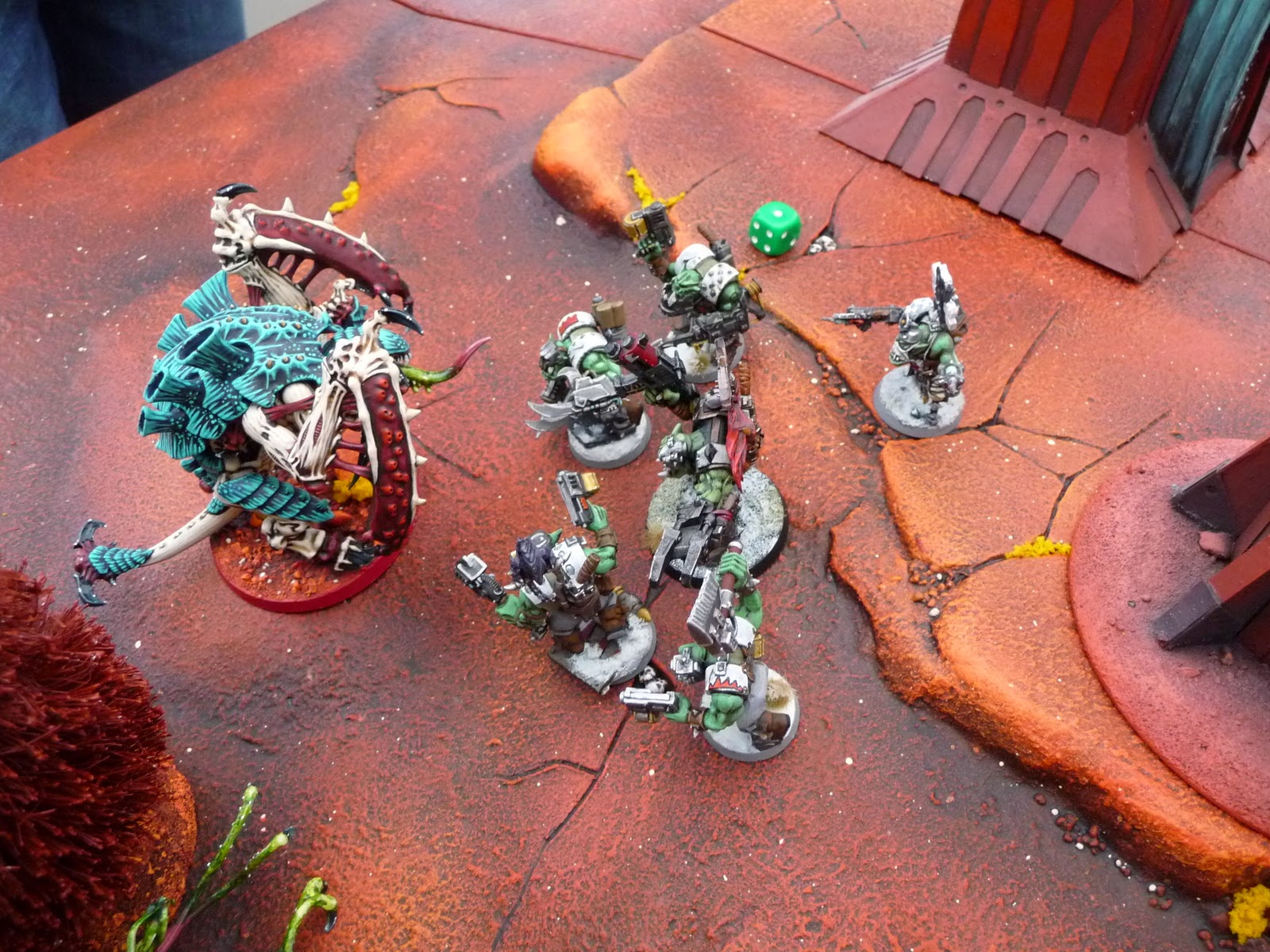 resulting in a pretty clean clear up, which included Slay the Warlord as Ben's Warboss was fulfilling that role. 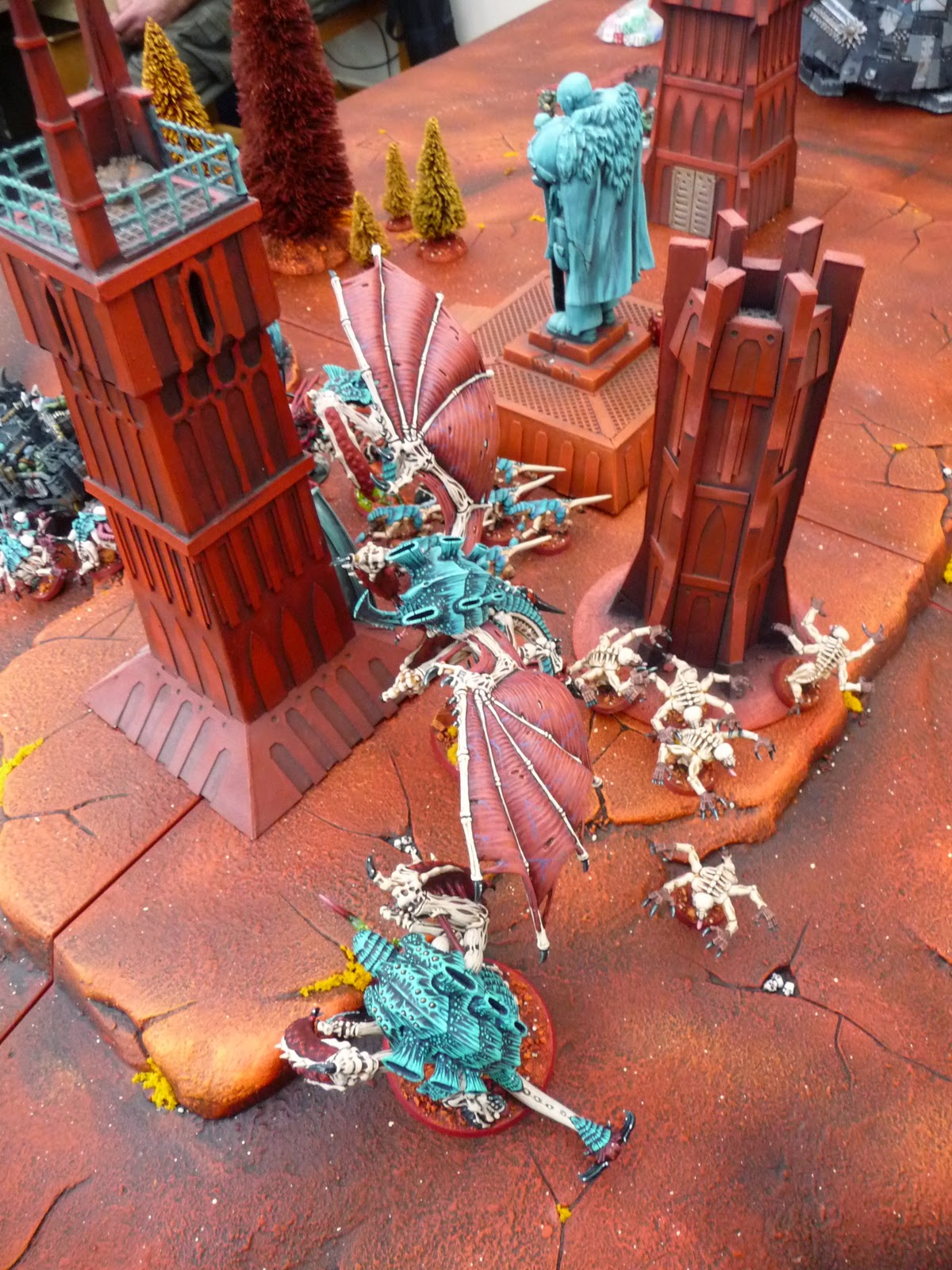 The Tyrannocyte landed, I sent forth the Genestealers and think I managed to immobilise so next turn it would be dead. 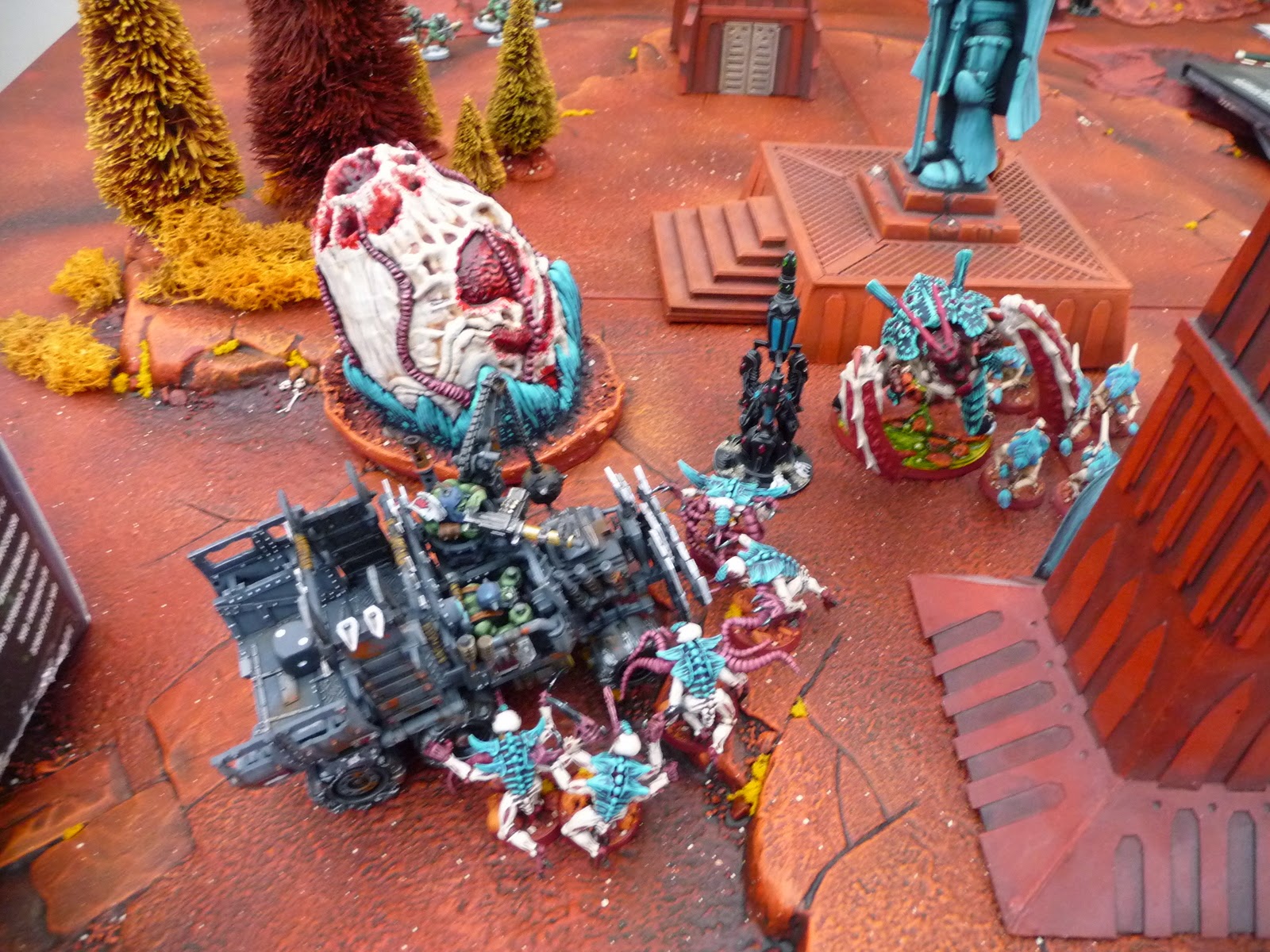 The Bastion proved to be too much of an enticement for the Stompa. Clearly the Orks assumed it was the biggest thing on the table and therefore the only thing worth stomping. The Quad Gun had managed to get a Hull Point on the Stompa [which had been repaired] so I gathered they were pretty grumpy with the alien structure. 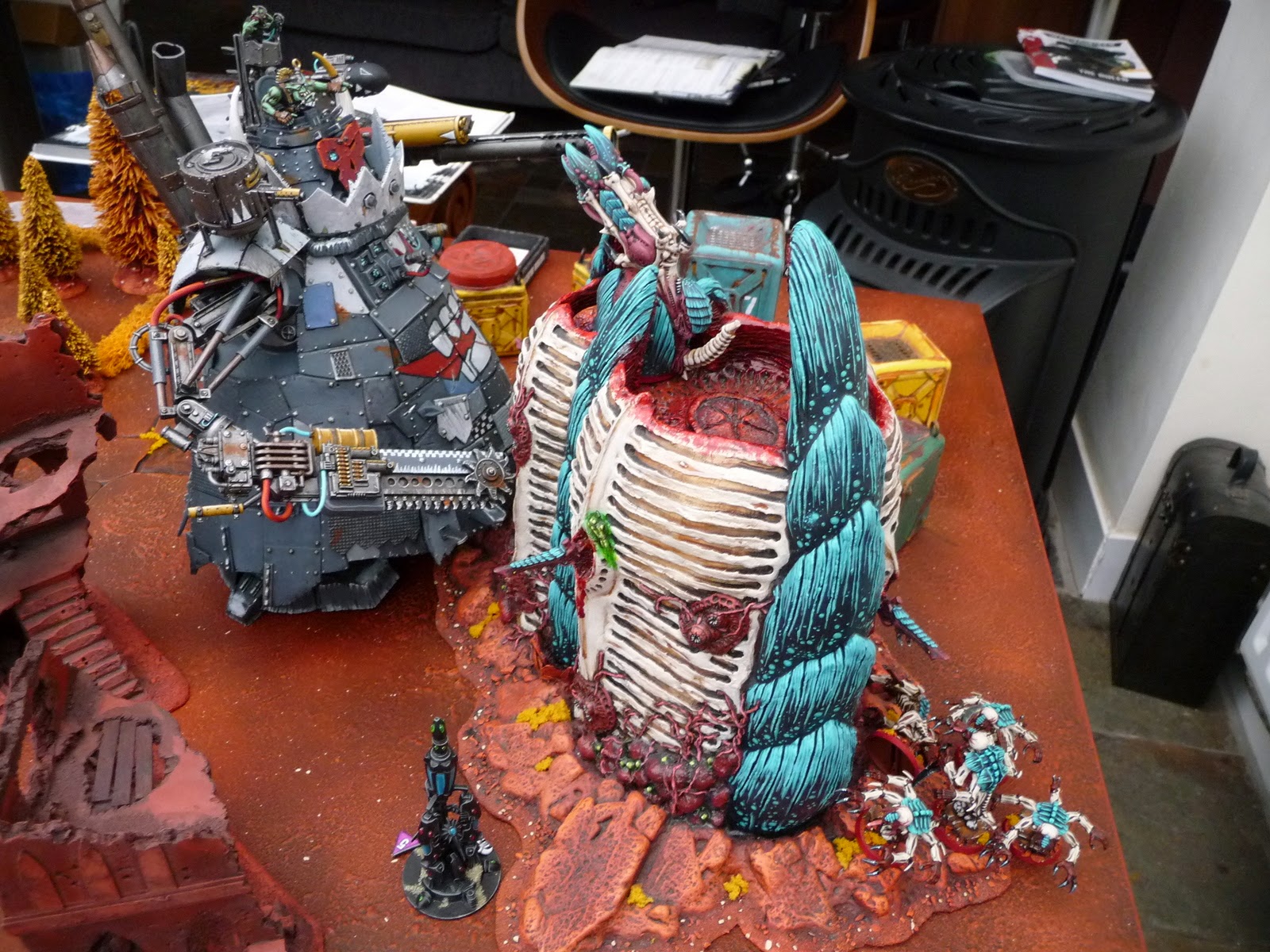 Which resulted in alien goop everywhere. With nowhere to hide the Genestealer get set to high tail it out of there, would an 8" head start be enough to escape the Stompa? 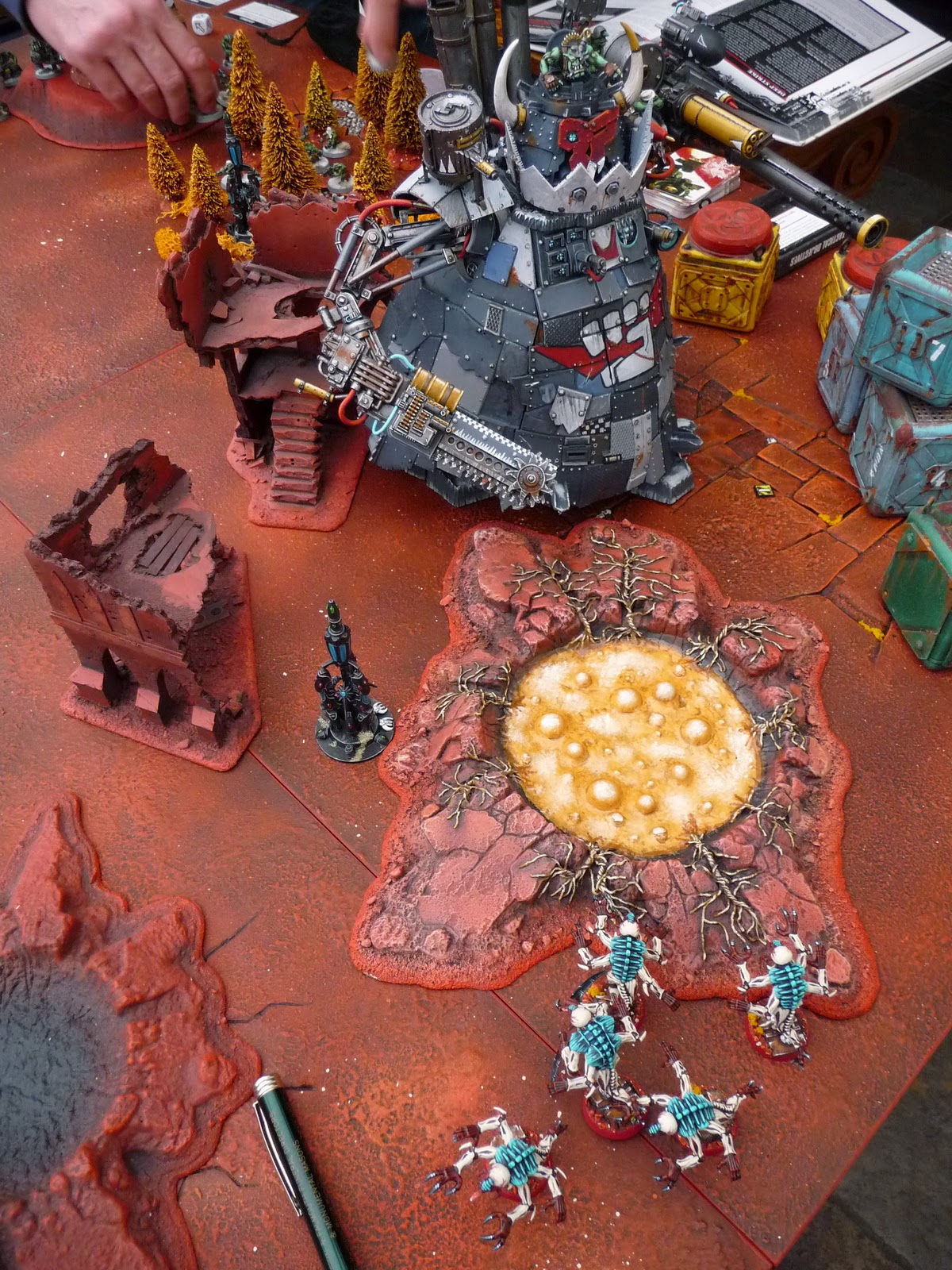 The Trukk succumbed to the rending attacks of the Stealers, blowing up and taking two of the Brood with it. 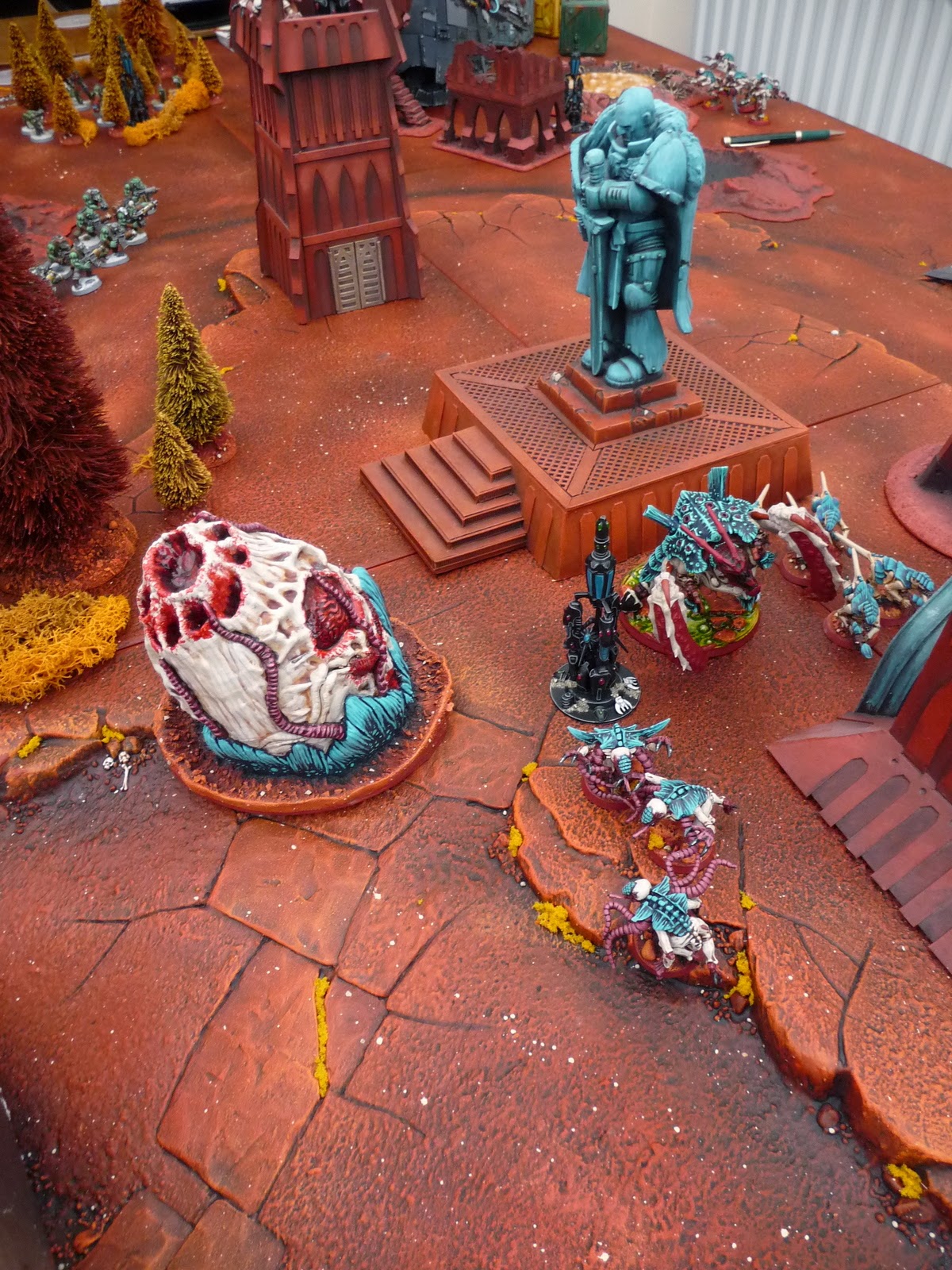 The Venomthrope abandoned it's objectives to cover the Carnifex but the tower Stealers replaced him in the woods just out of shot on the right. Flyrant swoops into the woods, he must have been hit by something as he's taken a wound. Luckily the Stompa ran out of ammo on one of it's guns very early on so the Flyrant had a much better chance of surviving. My last brood of Stealers must have outflanked and just about reached my objective. By this stage we had been quite unlucky with our Maelstrom cards. You generated one for every objective you held at the beginning of your turn and I'd been lucky to have roughly three to choose from each turn. With more units and a wider spread I'd manage to have more choice, so although the cards weren't great there was 1 or 2 I could get, where as Ben had less objectives, therefore less choice and his cards were extra VPs to Slay the Warlord, which was possible with 1 Wound already but also difficult as shooting down a flyer who is on the other side of the board is quite tough. 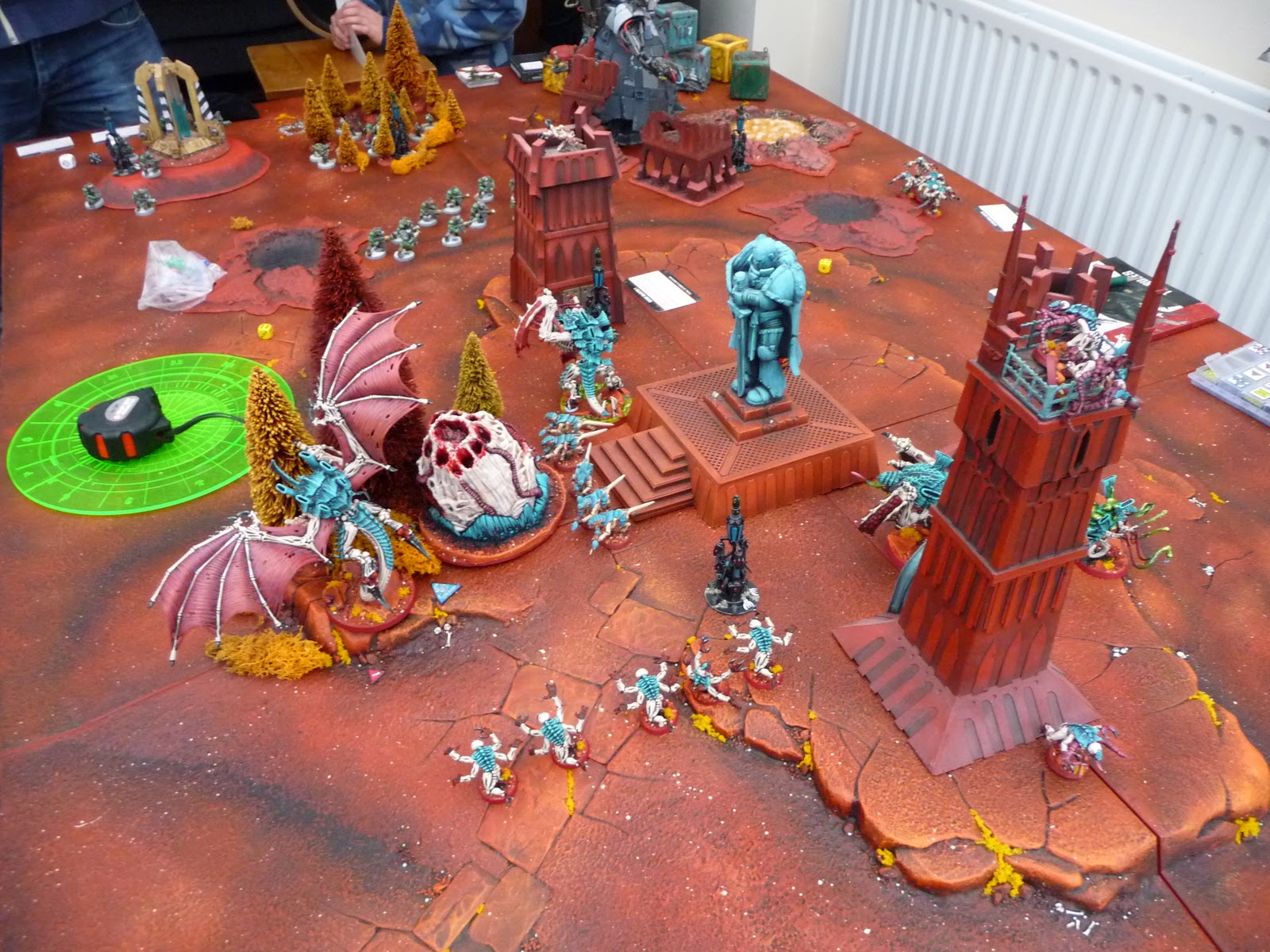 However, I got a card to secure the Plasma Generator objective so swooped over, thankfully Dominion - the only psychic power I seemed able to manifest [OK that's a lie I clearly got Catalyst off in the pic!] kept most of my Synapse in check. 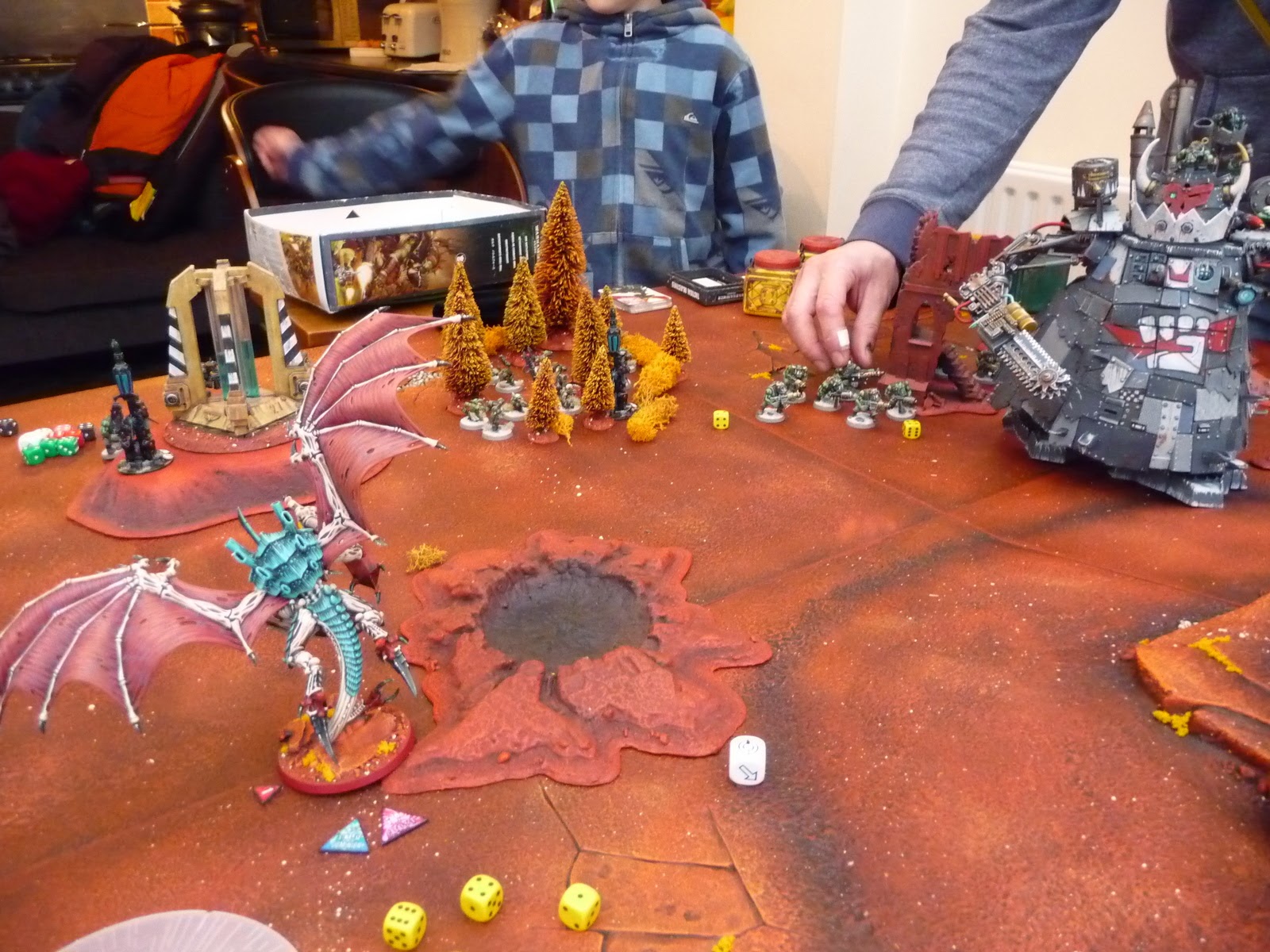 Meanwhile the rest of the Hive moved up to the centre of the board, with the Venomthrope once again securing an objective. 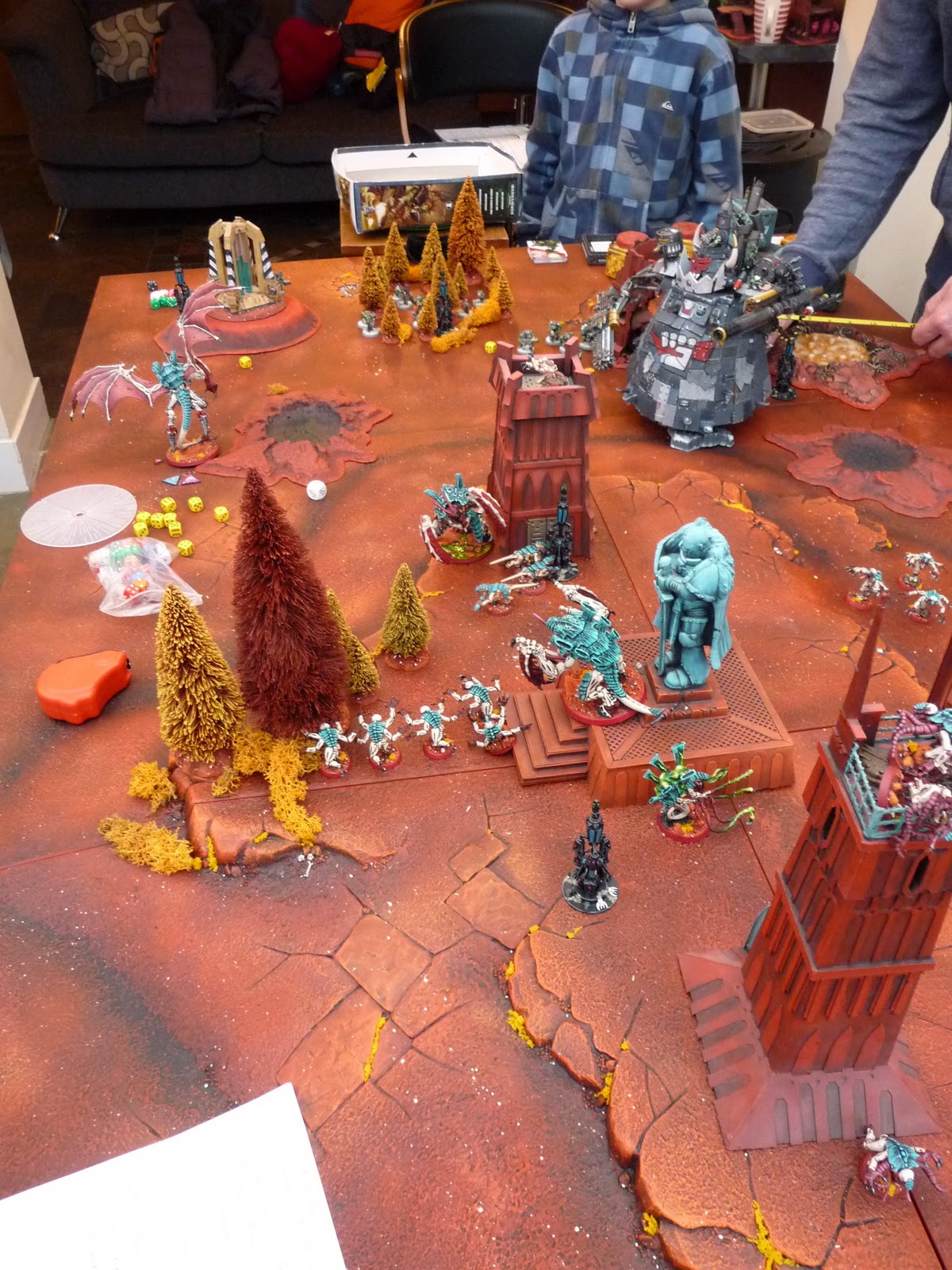 With the Stompa about to run amok in the middle of the board, the Stealers in the centre tower joined forces with the Stealer who had been running from the wrecked Bastion. Together they managed to hold back the Stompa for a turn! 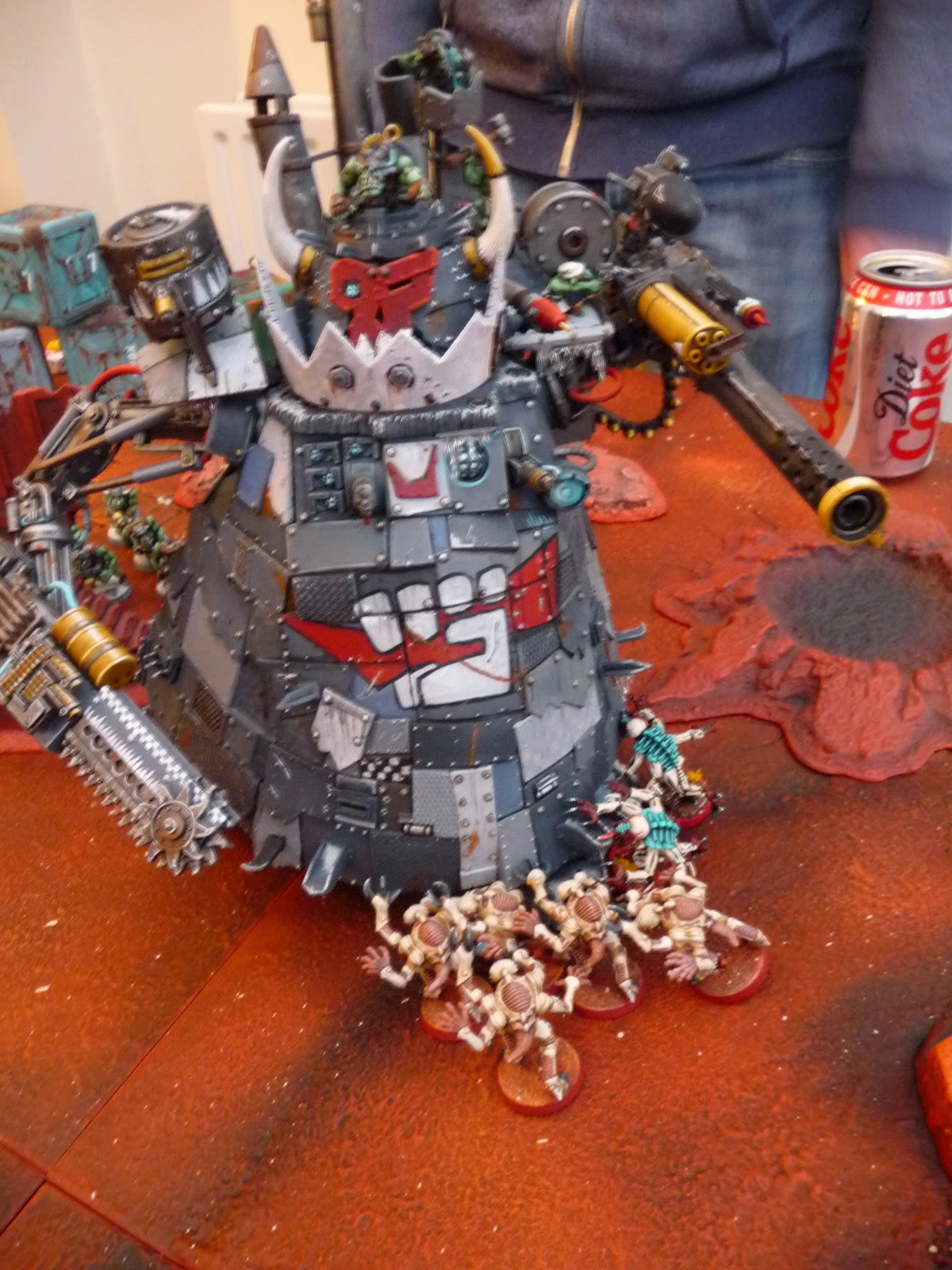 The Flyrant reached the objective, I think we were at the end of the game so I may have landed but I'm not sure if I scored the objective as there's still an Ork there 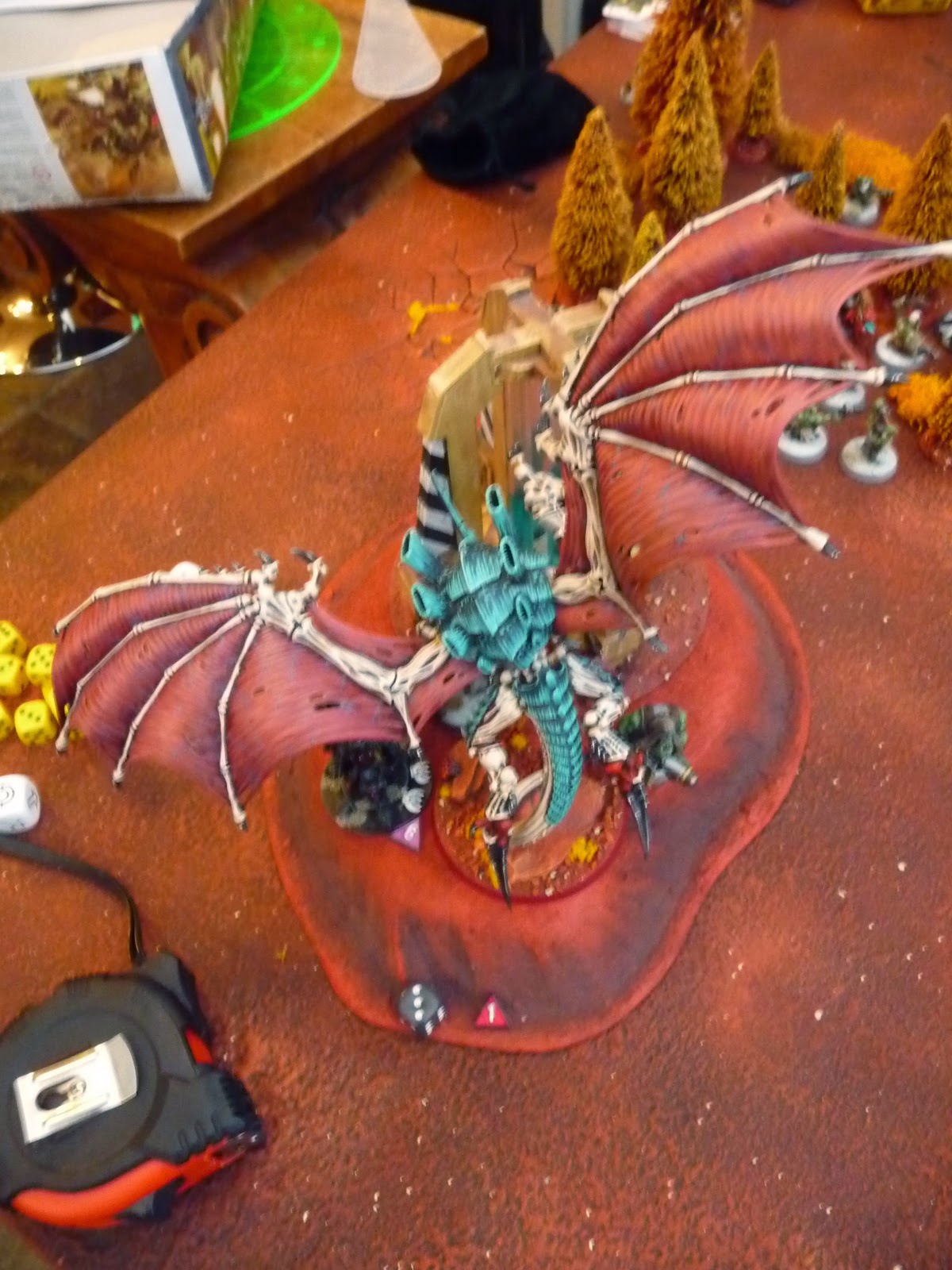 As the game came to an end the Genestealer were squished, which was a shame as the two Carnifex were all lined up to charge and crush this mechanical Behemoth. I'd manage to secure a 6:3 win.

We later played out what would have happened, only one Carnifex made it into the charge, but we ignored that and imagined both did. They may have done 2 hull points of damage and then they were both squished through Stomp and Destroyer weapons attacks! So my advice to Liam still stands, just ignore these things! Obviously it helps if it's out of position and goes off killing 100pts of building instead of the army. To be fair though the building could have scored points too. But just try and ignore it, unless you actually have something that can damage it that is. 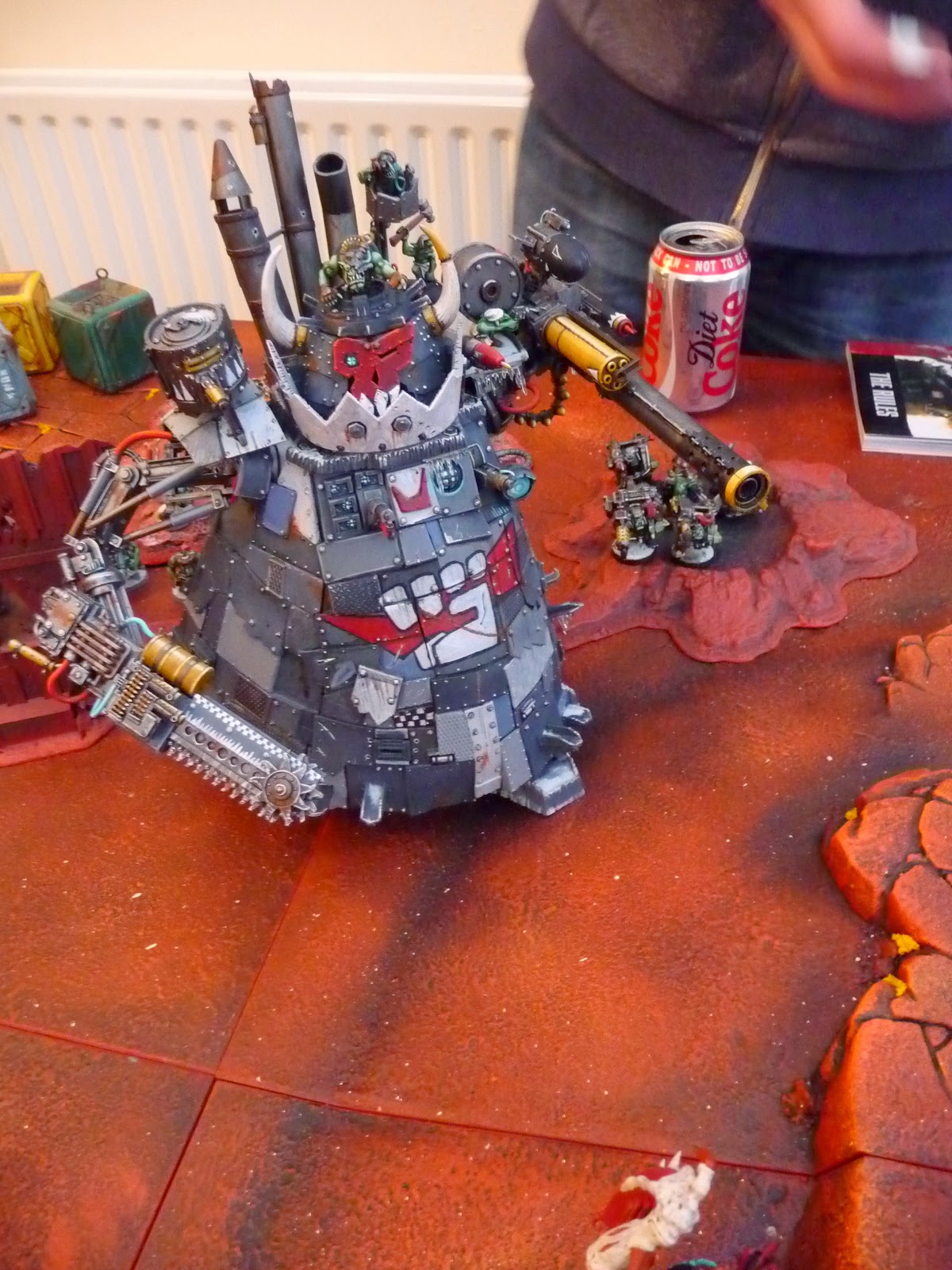 Over on the other table things started off all smiles. Liam and Otty insisted I record this for posterity because it was bound to end in acrimony, name calling and Chinese burns later on in the game ;) 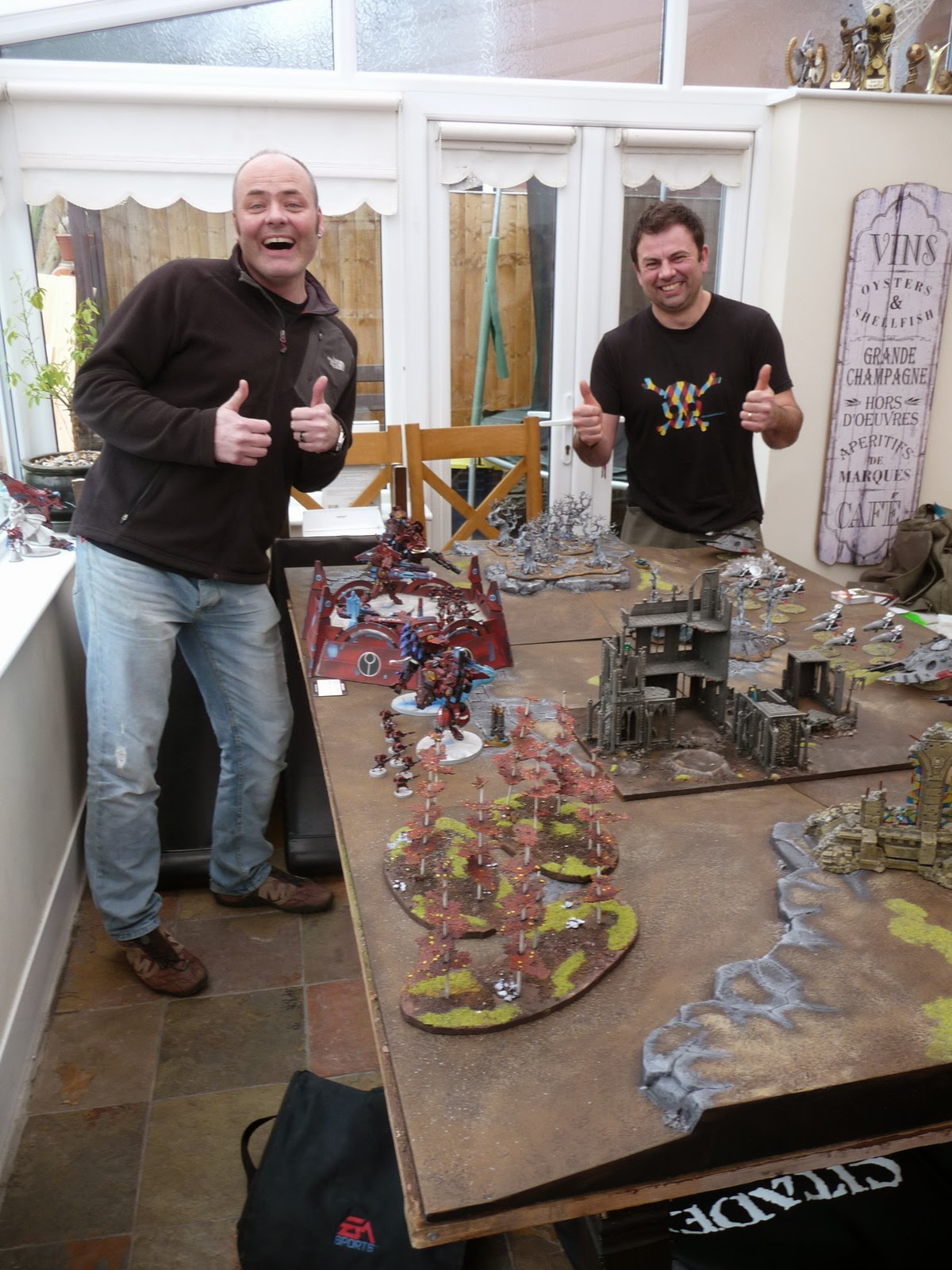 Things got a bit tense part way through, Wraith Knights and Wave Serpents are beasts so although the Riptides can be equally mobile and powerful this was two top-tier armies going head to toe. PeteB turned up part way through and given his fondness for Space Pixies spent a lot of time cheering on the Eldar. 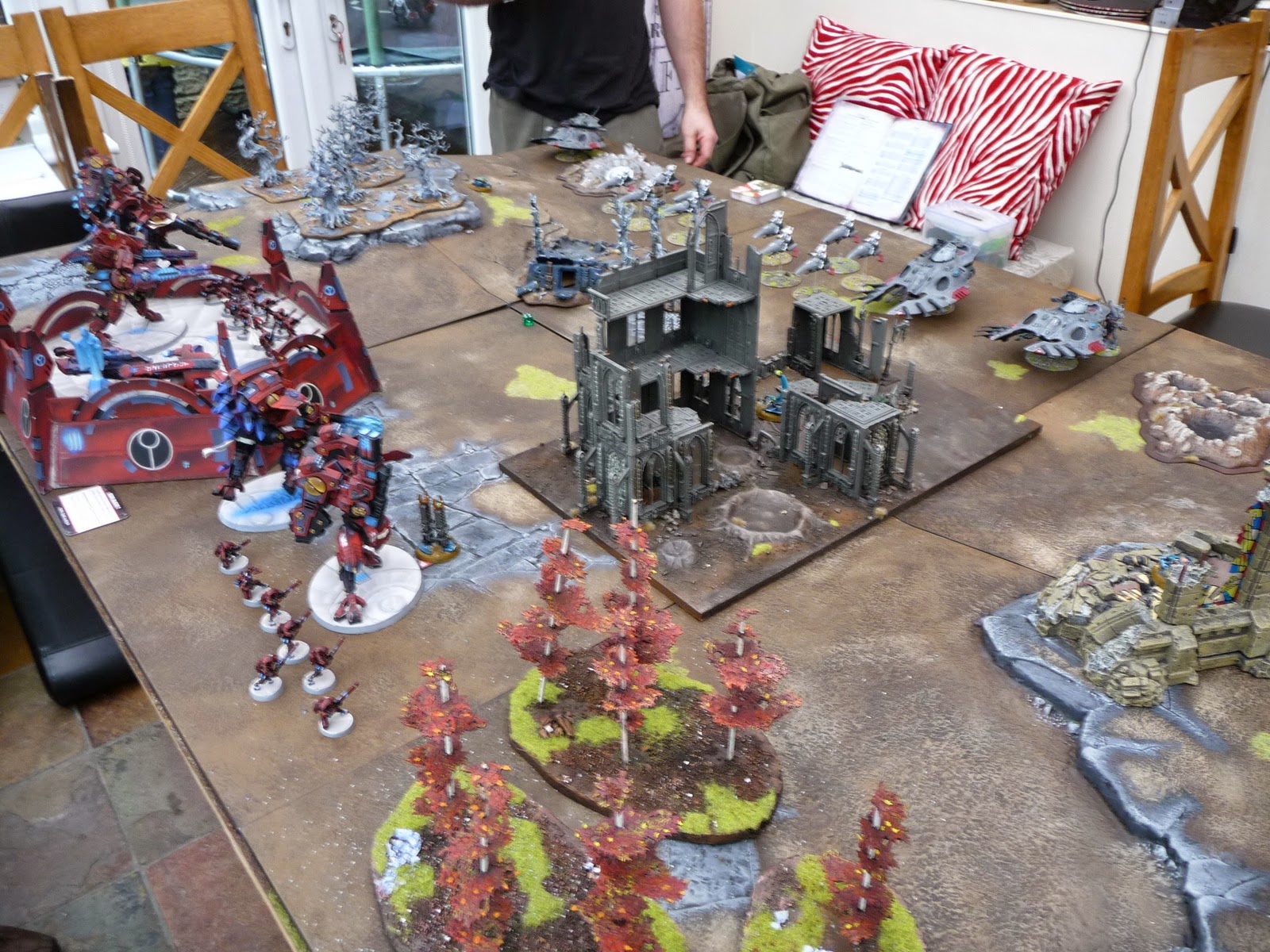 Liam went on to win but even when he was about 8:2 up on VPs the pressure the Eldar brought to bear on the Tau made it feel like the Greater Good where on the road to a good hiding! 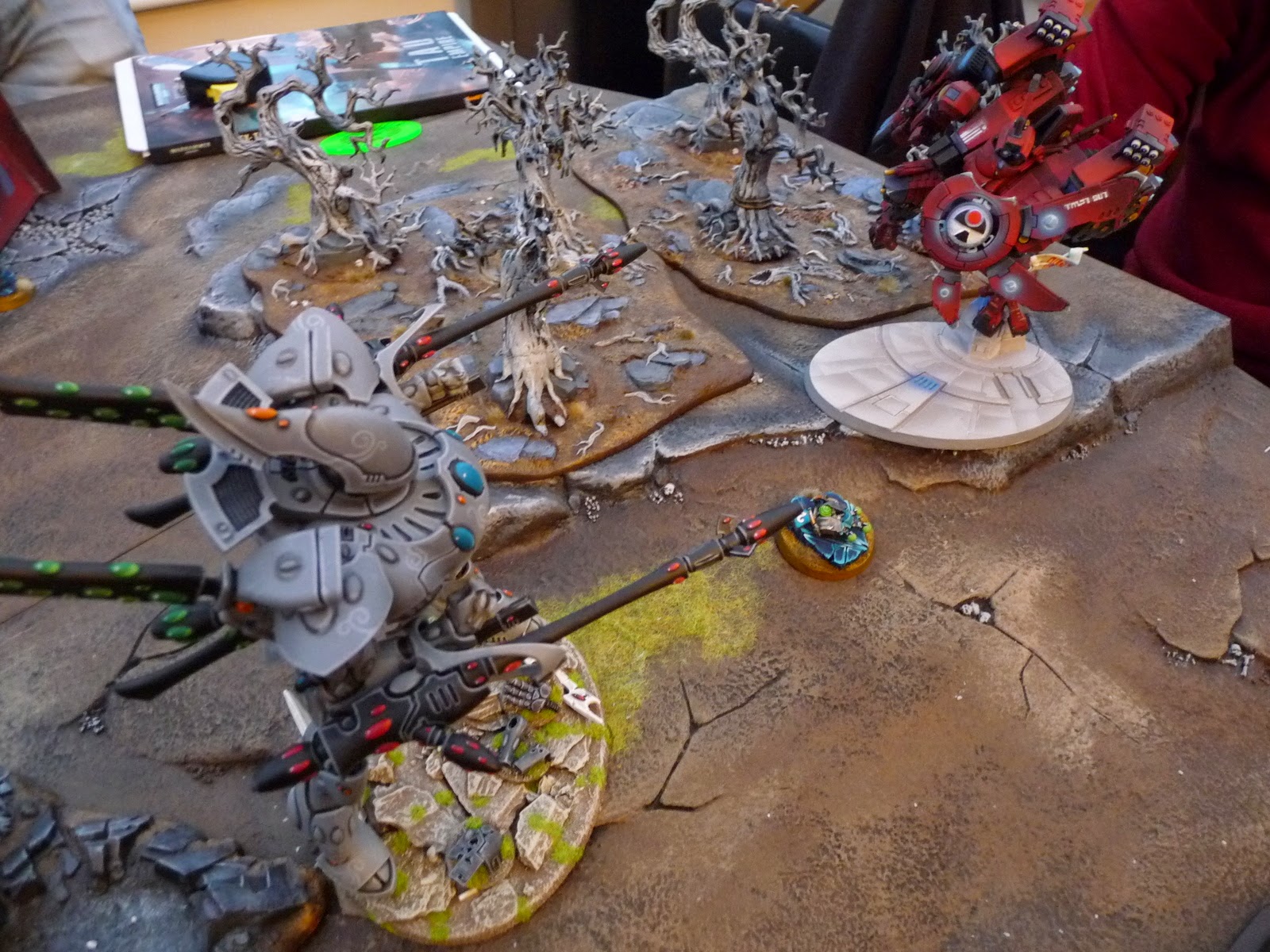 But they looked good while doing it and won out in the end. 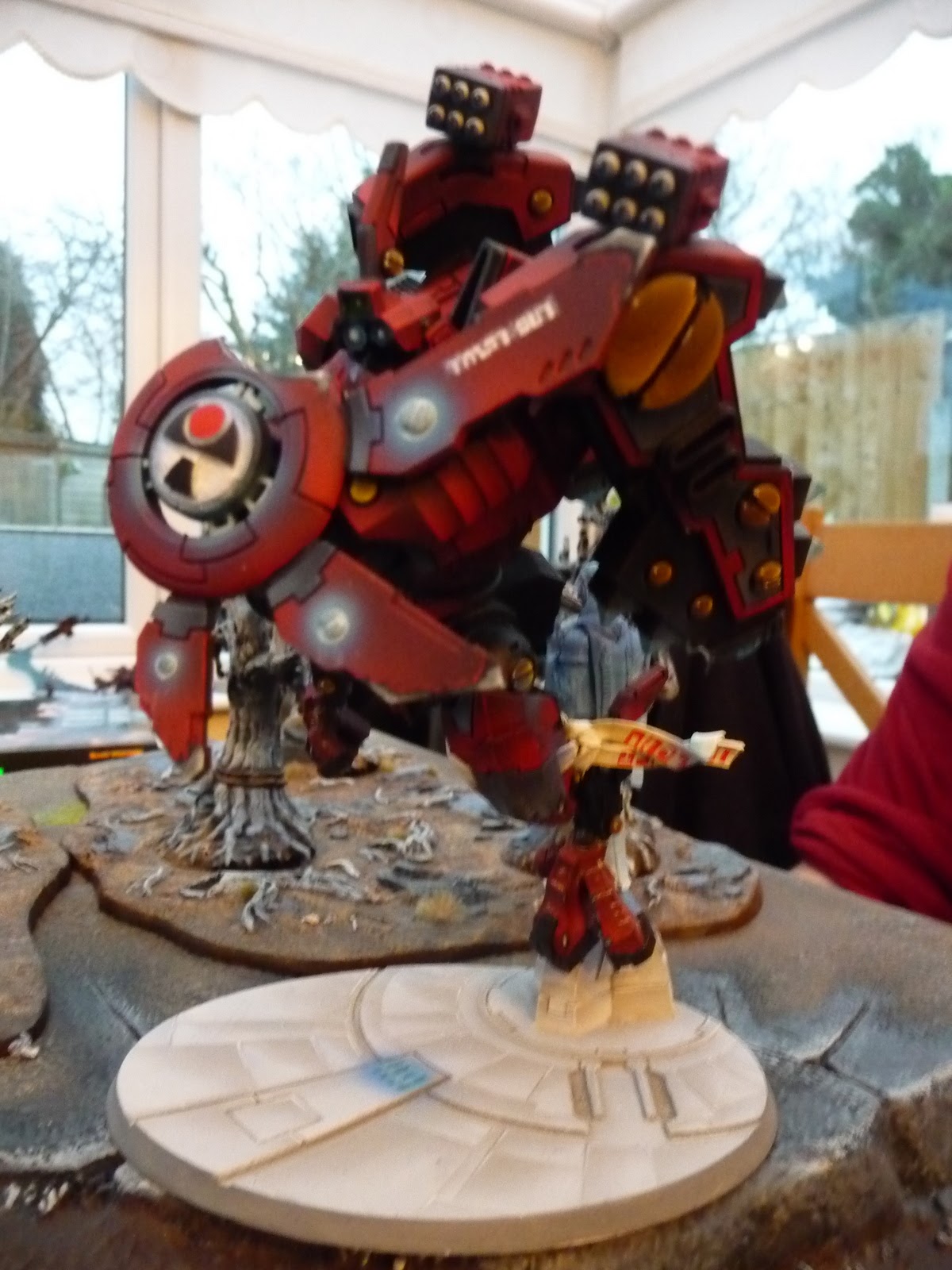 Unfortunately the Tau XV109 Y'Vahra Battlesuit [not in shot] got dropped at one point snapping the main body off the gun. It wasn't 100% complete so Liam is confident of it's repair but it was a sharp intake of breath moment for all of us. 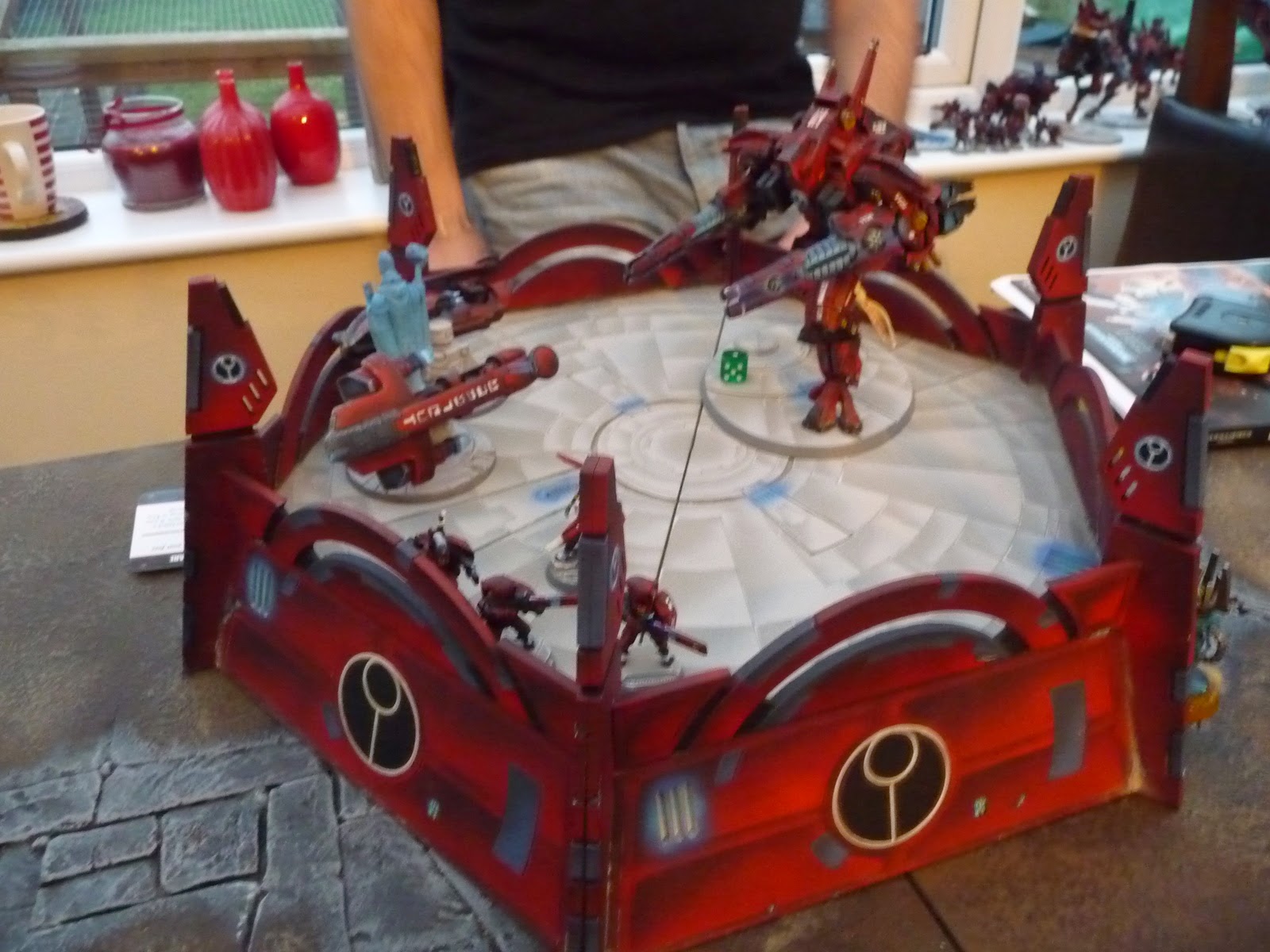 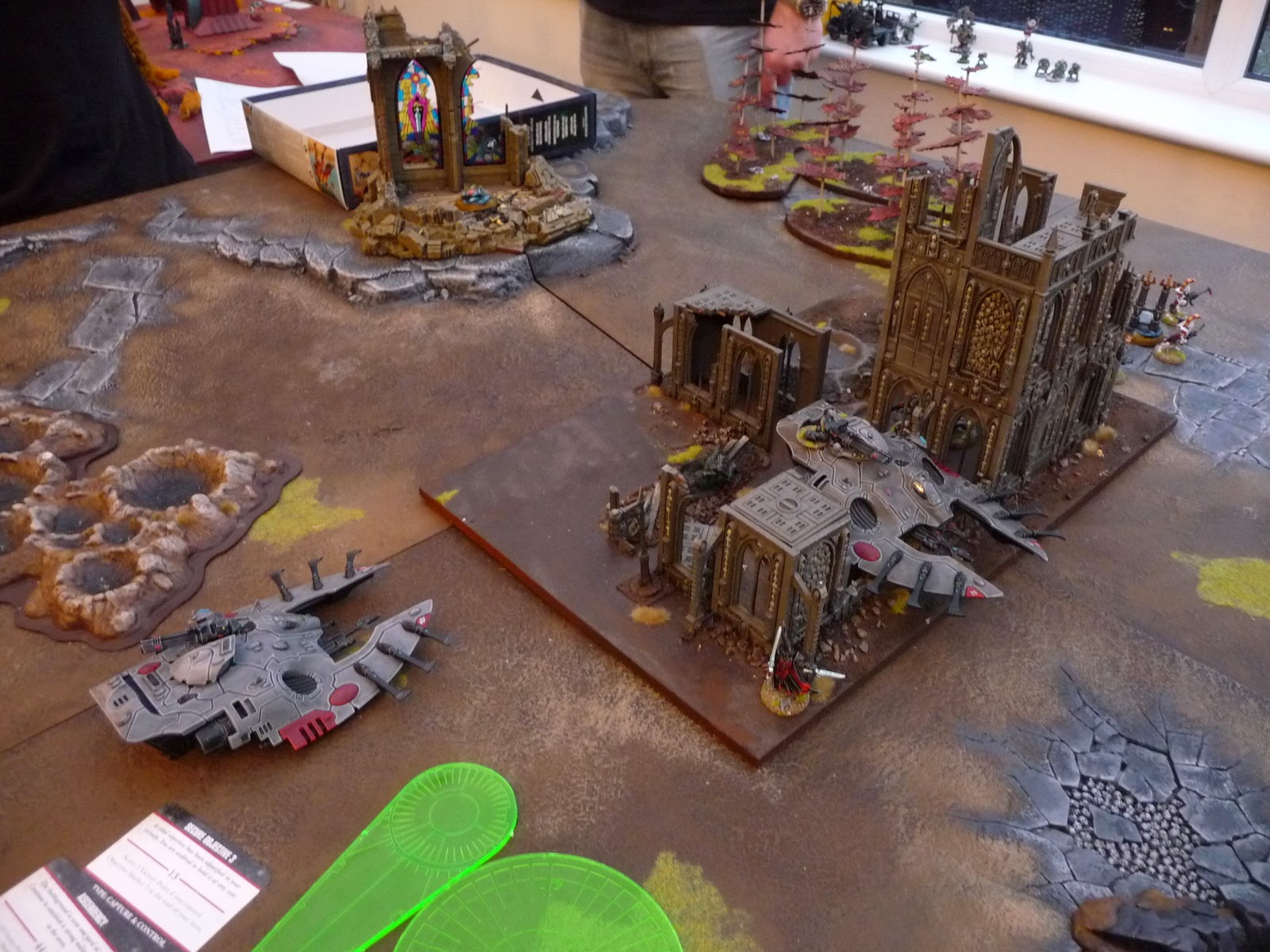 So I was 2 wins so far, y'know I might actually win this thing yet! How embarrassing would that be :P