I'll be honest here my army list is codenamed 'Ripped Tights', it's been adjusted but way back when Liam started running Riptides in droves I wondered what I would do should I ever face them. Shortly thereafter I had some success with the Genestealer and I realised that as Riptides are Monstrous creatures then Toxin Stealers might be the answer. Well, we shall see.


The low down:
First of all setup as Liam came to the board he was slightly concerned that one side had more objectives closer to the DZ so as I won setup I let him have that side as it had the ruins in anyway which I could infiltrate Stealers into. I'm 2:0 up, but I'm under strict instructions from the wife that I can’t win the prize, so I really don’t care and then I roll my warlord trait! How much fun is infiltrating 3 units and Warlord going to be!

What originally seemed like a simple plan becomes complex, which units do I Infiltrate? Then I make the mistake of discussing it with PeteB who’s decided to watch our game after the Eldar one. Now I’ve been on the other side of this sort of casual tactical debate and I didn’t like it, it feels like you're being ganged up on, so I can only apologise to Liam for not thinking how it would come across. Eventually I decide to put Stealers in the ruins, the central tower and the tower on the far right and the last unit behind the Bastion, for back field. Meanwhile the Tervigon is in the Tyrannocyte, y'know for giggles! 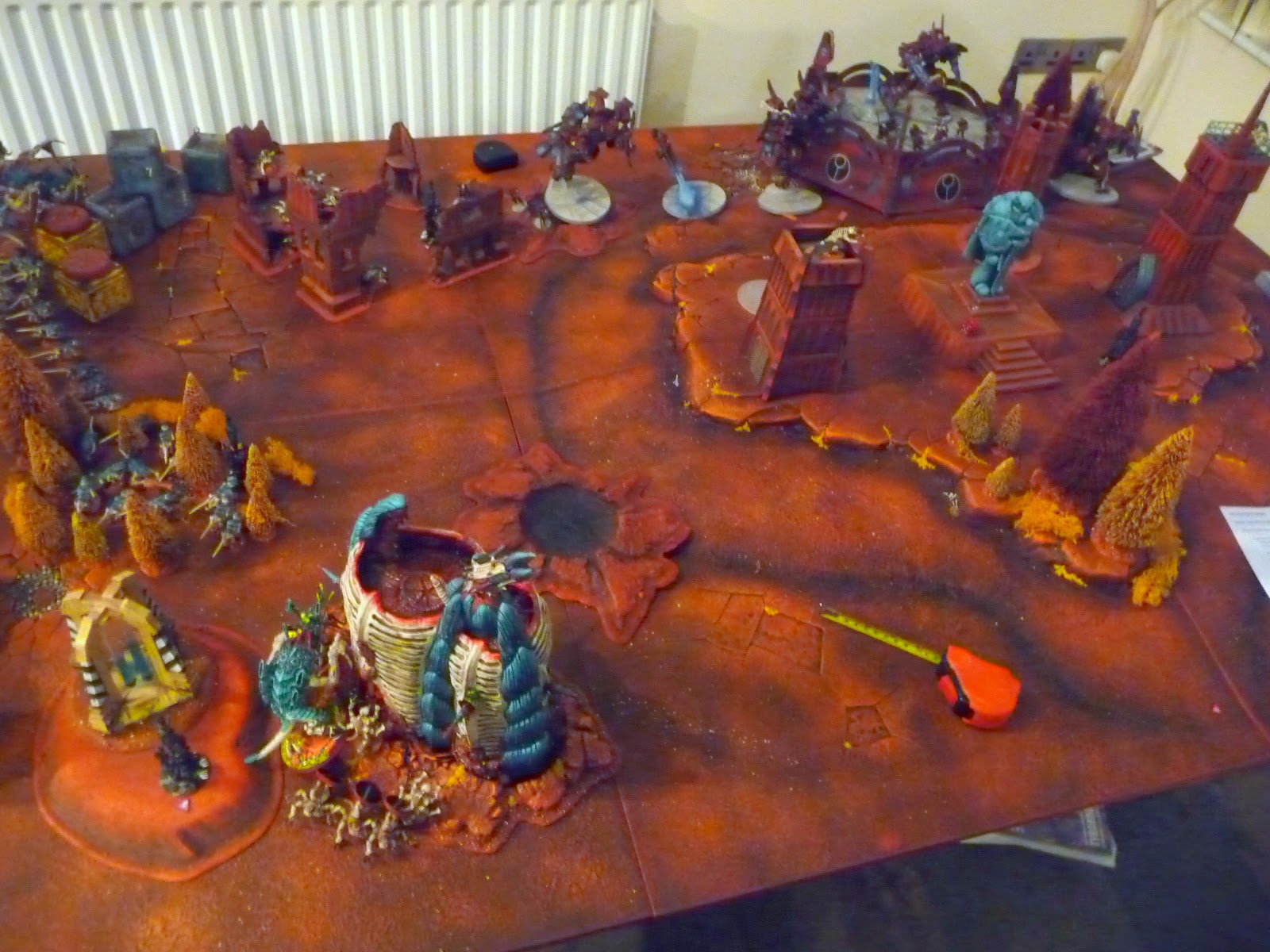 And I decide on the 30 Termagants, a Dakkafex and the Flyrant, that sit in the top left behind the futuristic containers. I realise now this is only two units and the Warlord Infiltrating! Doh! I’d been umming and ahhing so much I didn’t put the second Dakkafex or the Venomthrope with them. 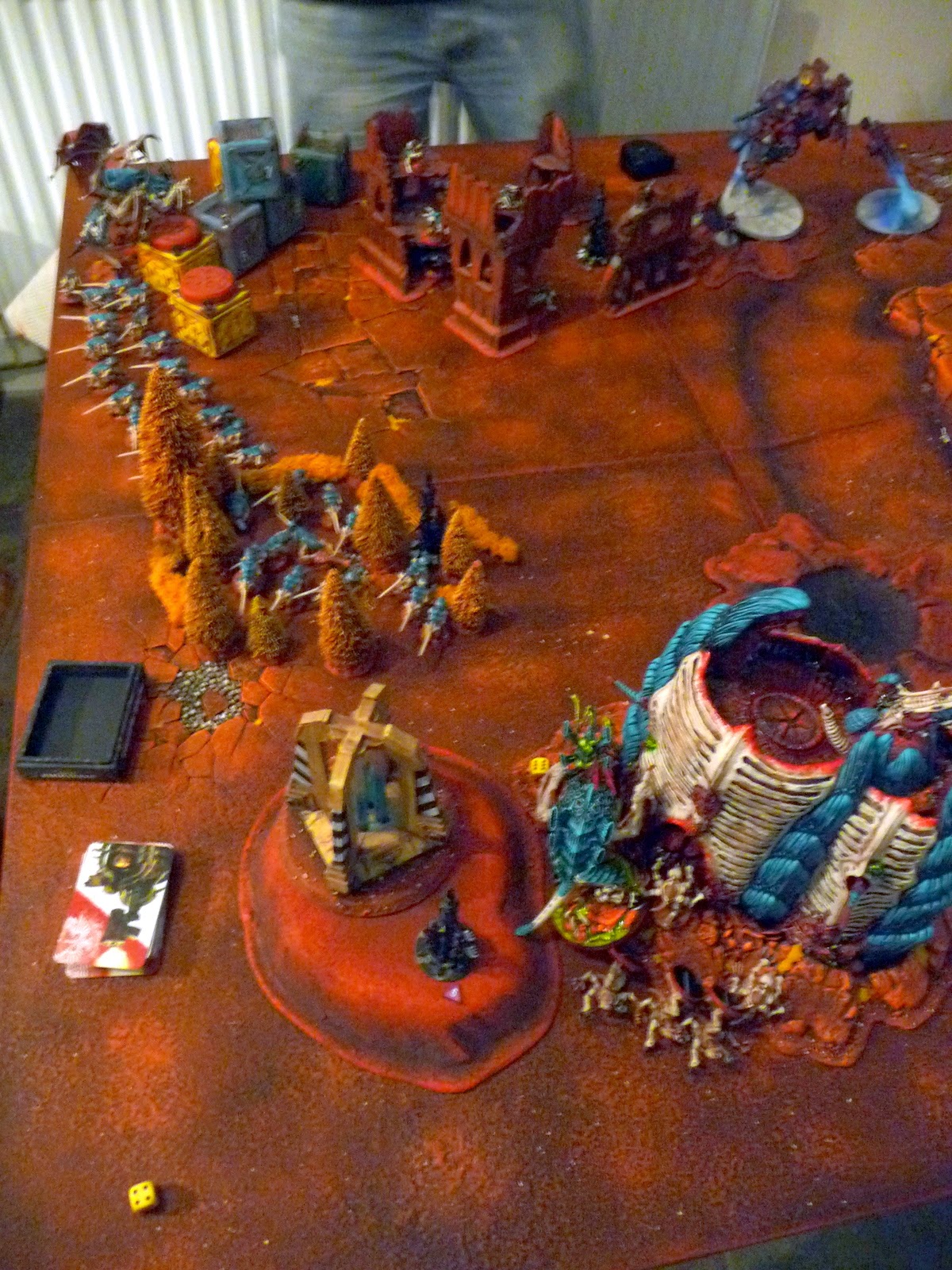 With the Stealers in the Towers we debate just how tough these building are. I've been playing these as AV14 all day and it's not been an issue but Liam believes this is OTT. Which is fair comment but all I'm concerned about is if I agree to AV12 then that's a bit unfair on Ben and Otty who've faced AV14 all day. Eventually we reach a compromise and dice roll, 1-2 it's AV12, 3-4 AV13 and 5-6 AV14 and we end up with AV13 buildings. 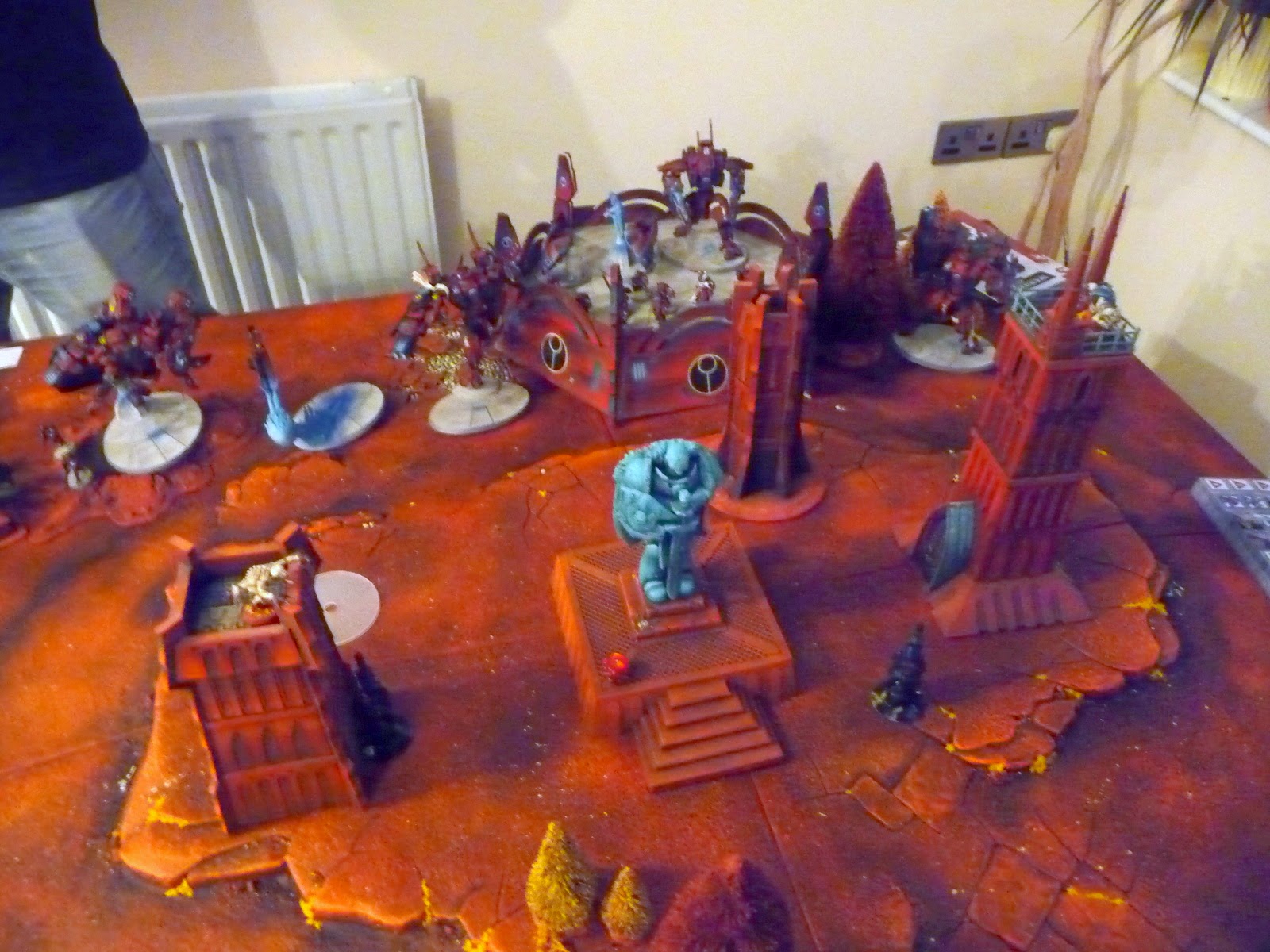 With most of the Tau on the right flank most of Liam's first turn will be spent repositioning but they're mobile enough to do just that. He does however manage to secure first Blood by roasting most of the Genestealers in the ruins 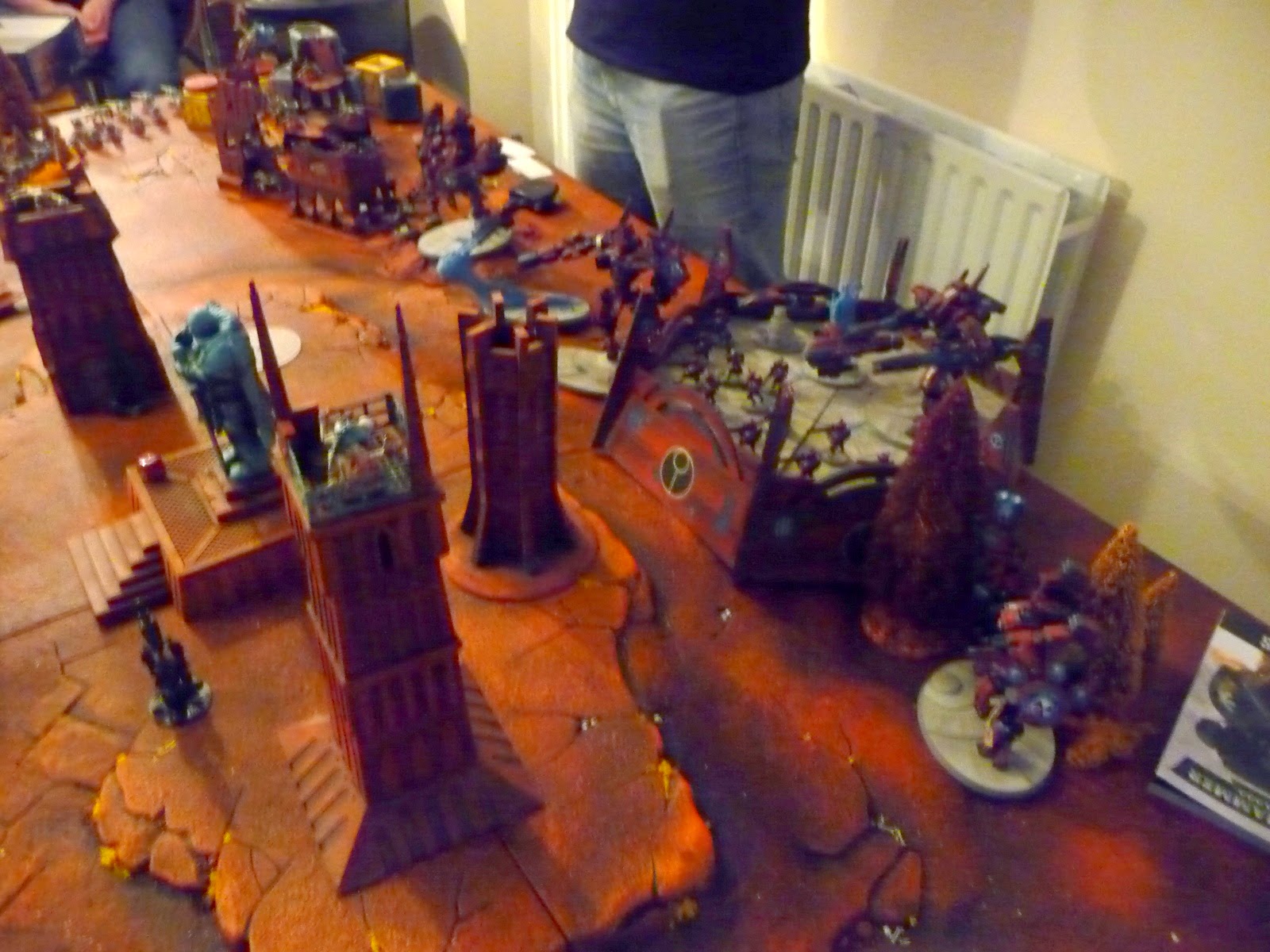 The [now broken, it got dropped] Tau XV109 Y'Vahra Battlesuit switches on it's stealth cloak but the exposed flamer is sufficent enough to allow the Dakka Fex and Flyrant to draw a bead on, taking off two wounds. The Fire Warriors in the ruins suffered devastating losses but they stayed their ground. 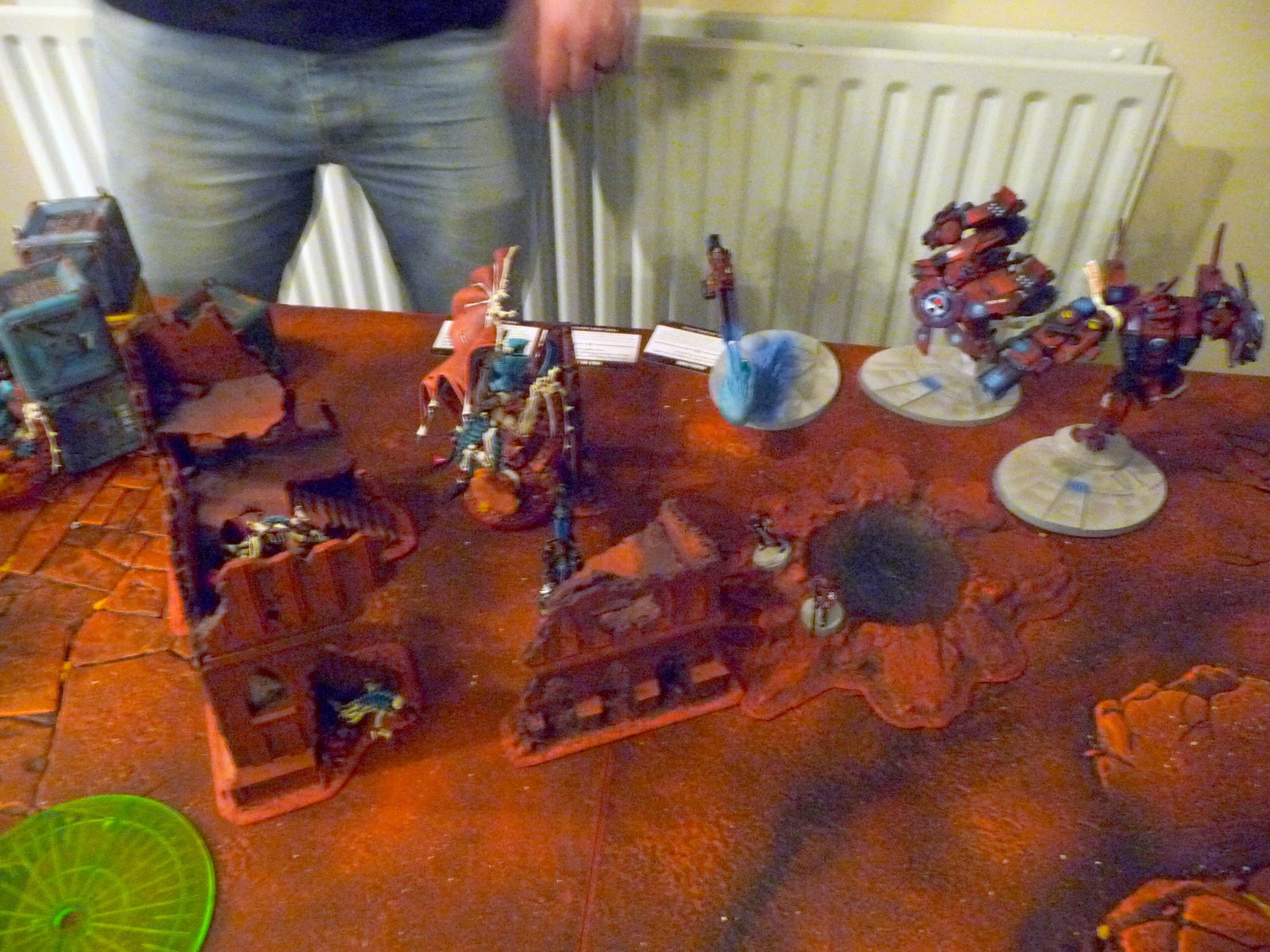 The Carnifex had to bash it's way through the containers to get into range, barely! Once again I tried to use Psychic Scream but was denied. Seriously! There isn't even a Psychic entity on the board and it's stopping me from getting a power off [yes I know the Tau are psychically null but it's just wrong!] 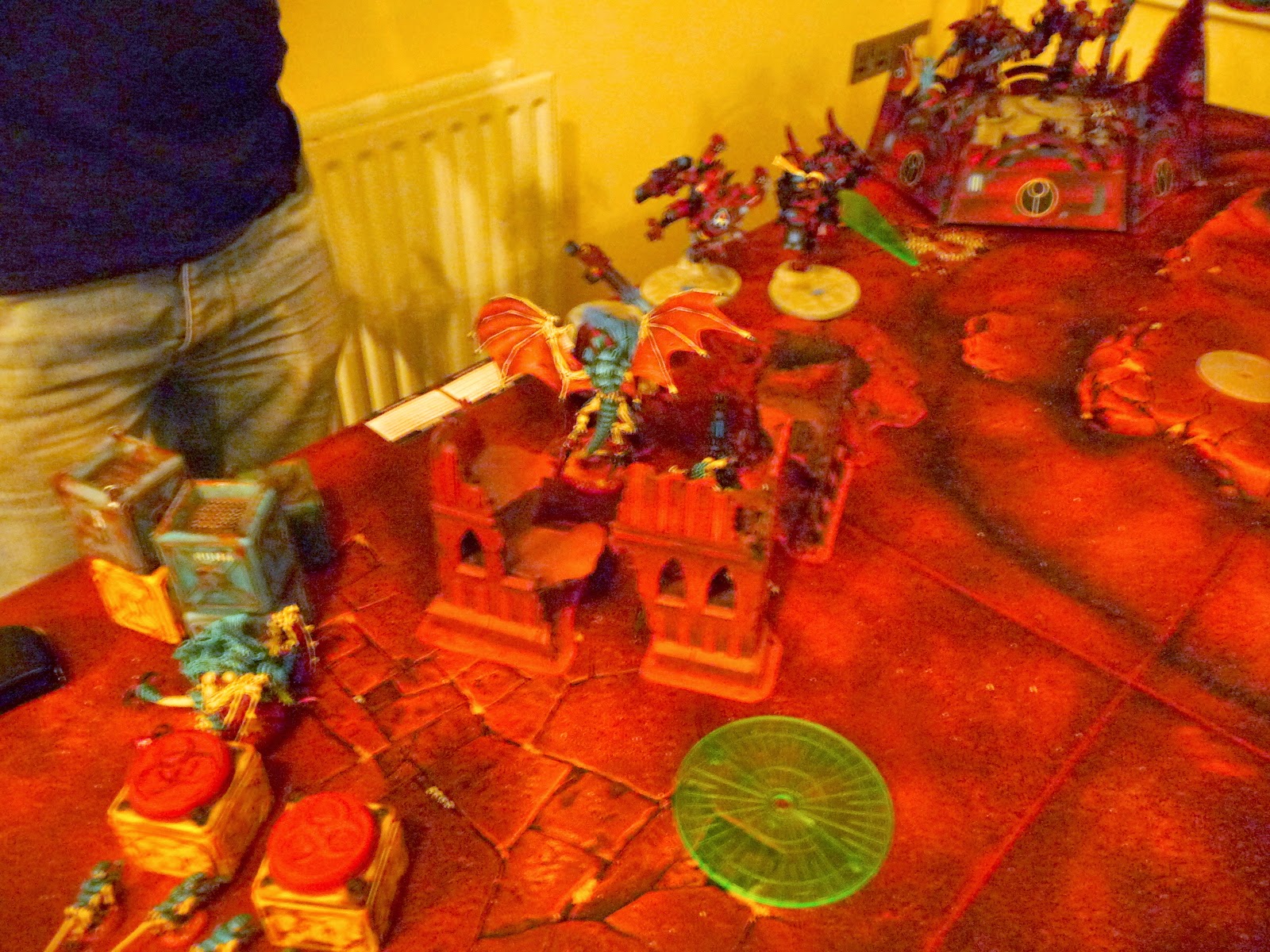 The Termagants were not so forthcoming as theire bigger brothers moved off, only moving 2" from their initial Infiltration. By the end of turn one I've somehow managed to score 2VPs to Liam's First Blood and 1 objective VP. 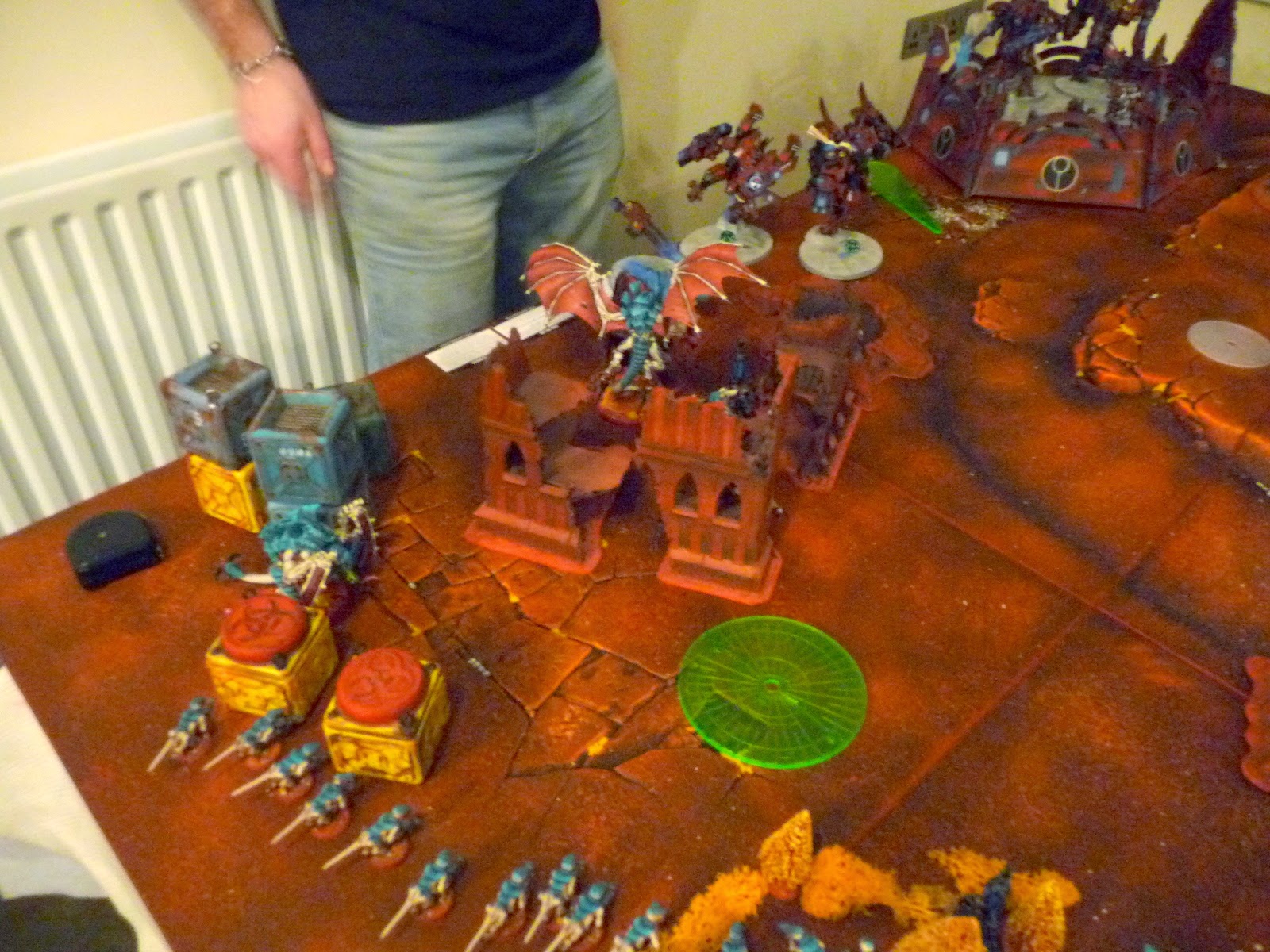 In my Turn 2 the Tyrannocyte arrives and disgorges the Tervigon who also spawns giving me plenty to hold onto the objective should it become active, which it might have, as I recorded another 2VPs scored this turn. Current score is 4:2 to me 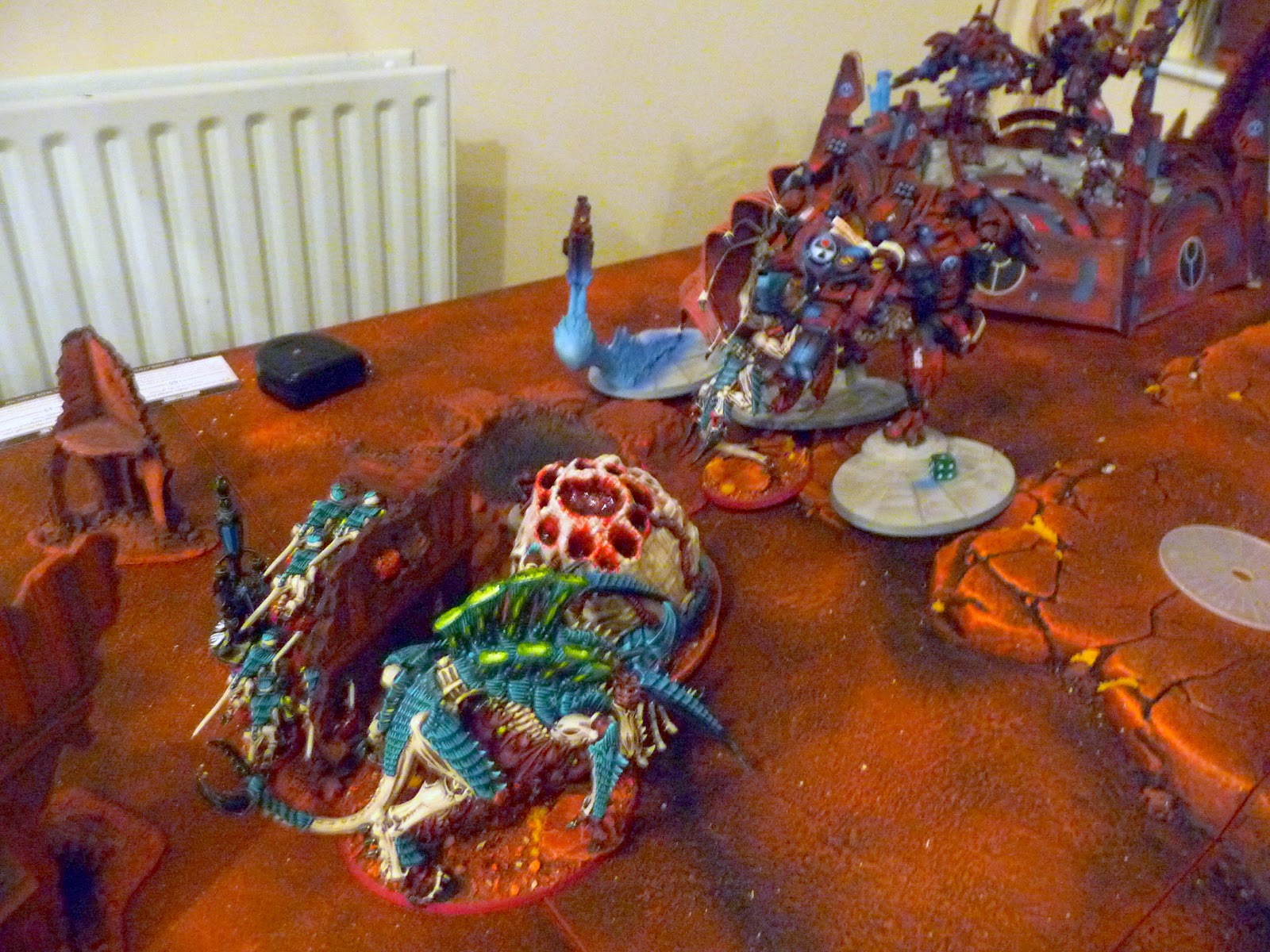 The flyrant moved the minimum to still be in range of the three Riptides and hopefully get Psychic Scream off, not! But I did manage to wound one of them at least. I must point out that during the game Liam moved the wounded Riptide. In return it took a wound. 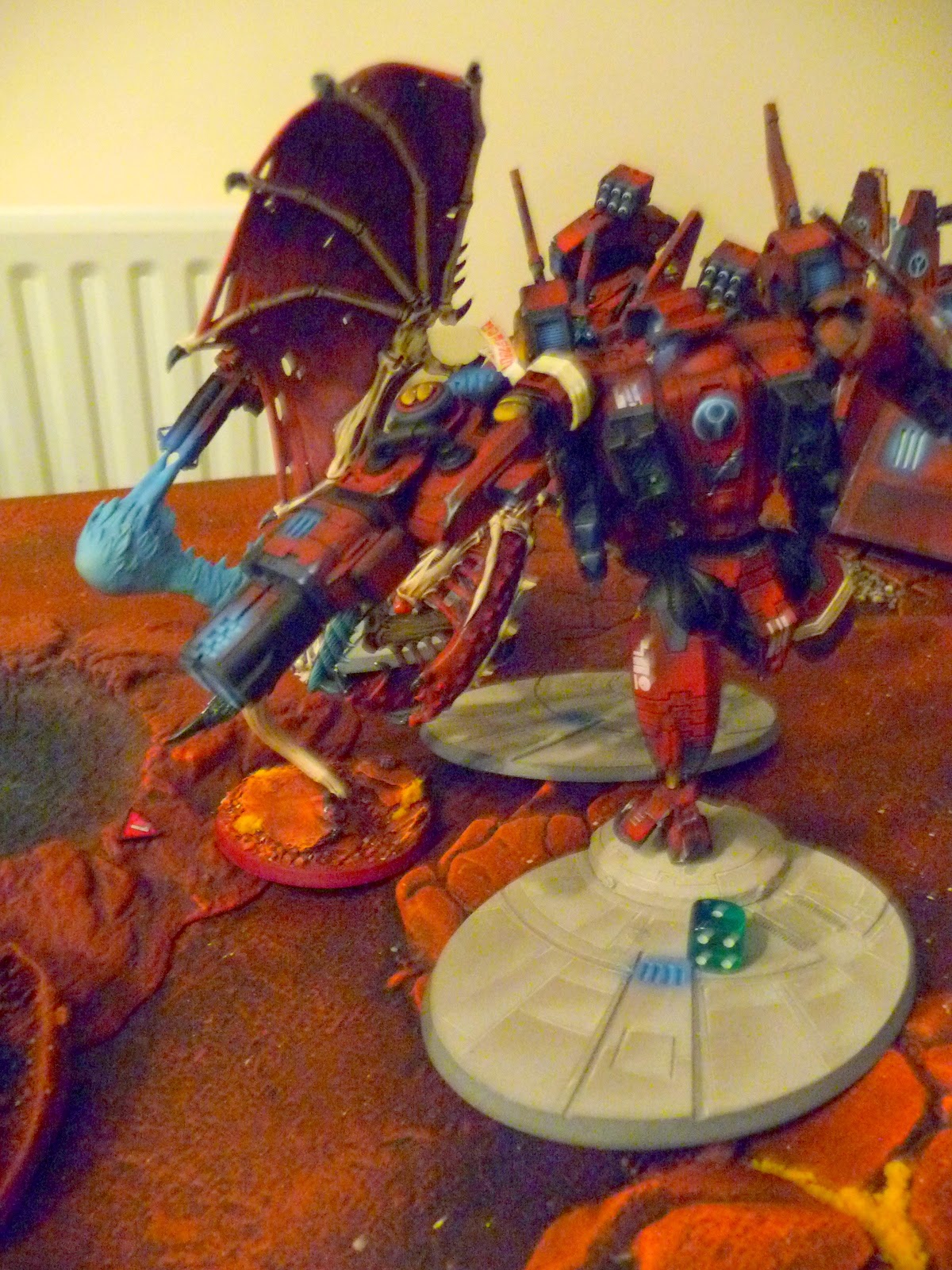 Here it is on top of the Tower, although he moved it down eventually and in the process misplaced the 'wound dice' he'd allocated to it. When we realised I laughingly, railed against him because that very days blog post had referenced such an event. Of course I knew full well that he makes his own wound markers and as this army is still 'in progress' they hadn't yet been created. However, it was a reminder that even the best of us make that mistake, so think on kids! 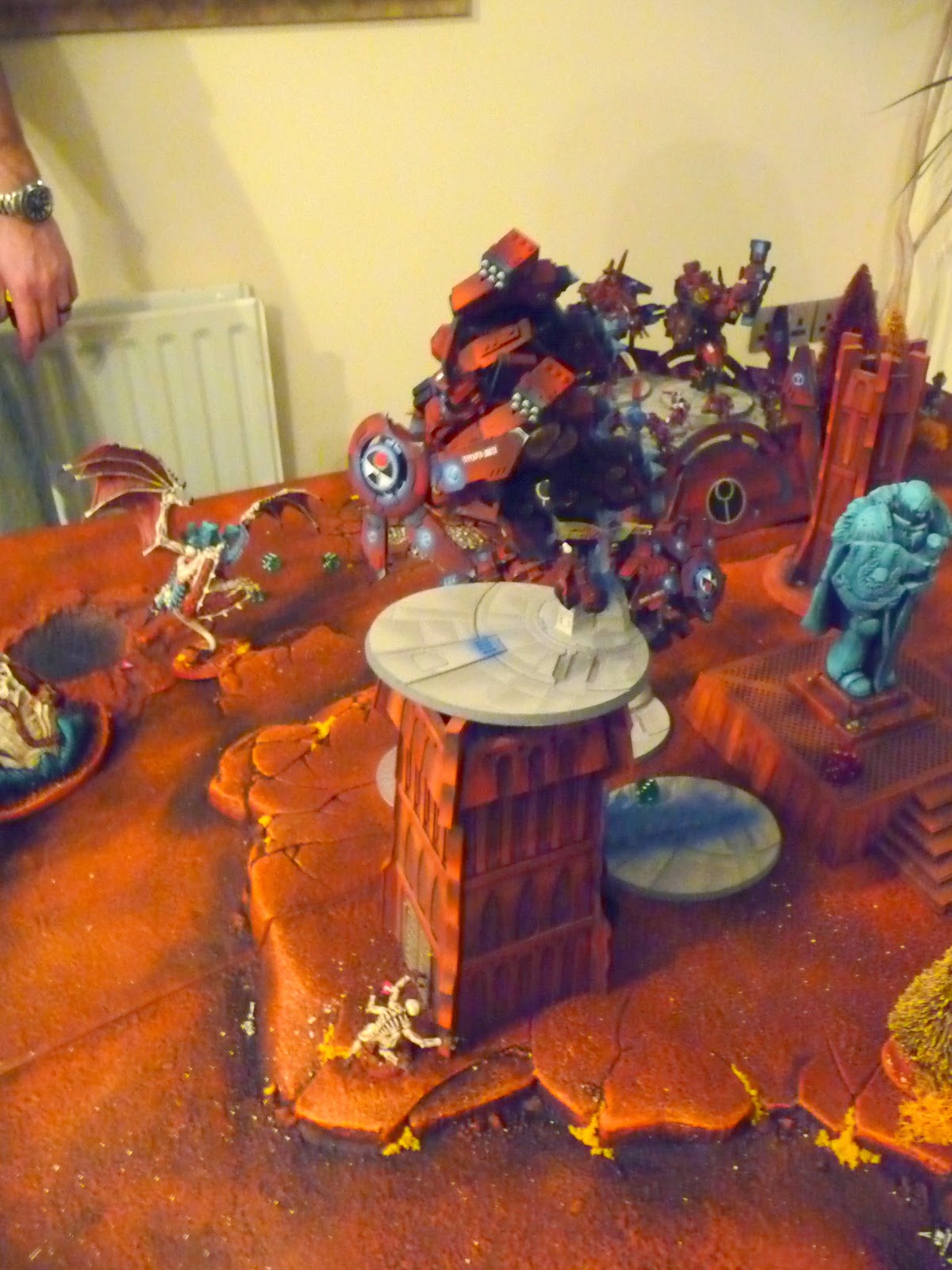 Riptides blasted the Tervigon to pieces taking many Termagants with it. This got Liam a VP for killing a Psyker. I was still in the lead, but in this tun Liam scores 2 VPs drawing us even on 4:4. 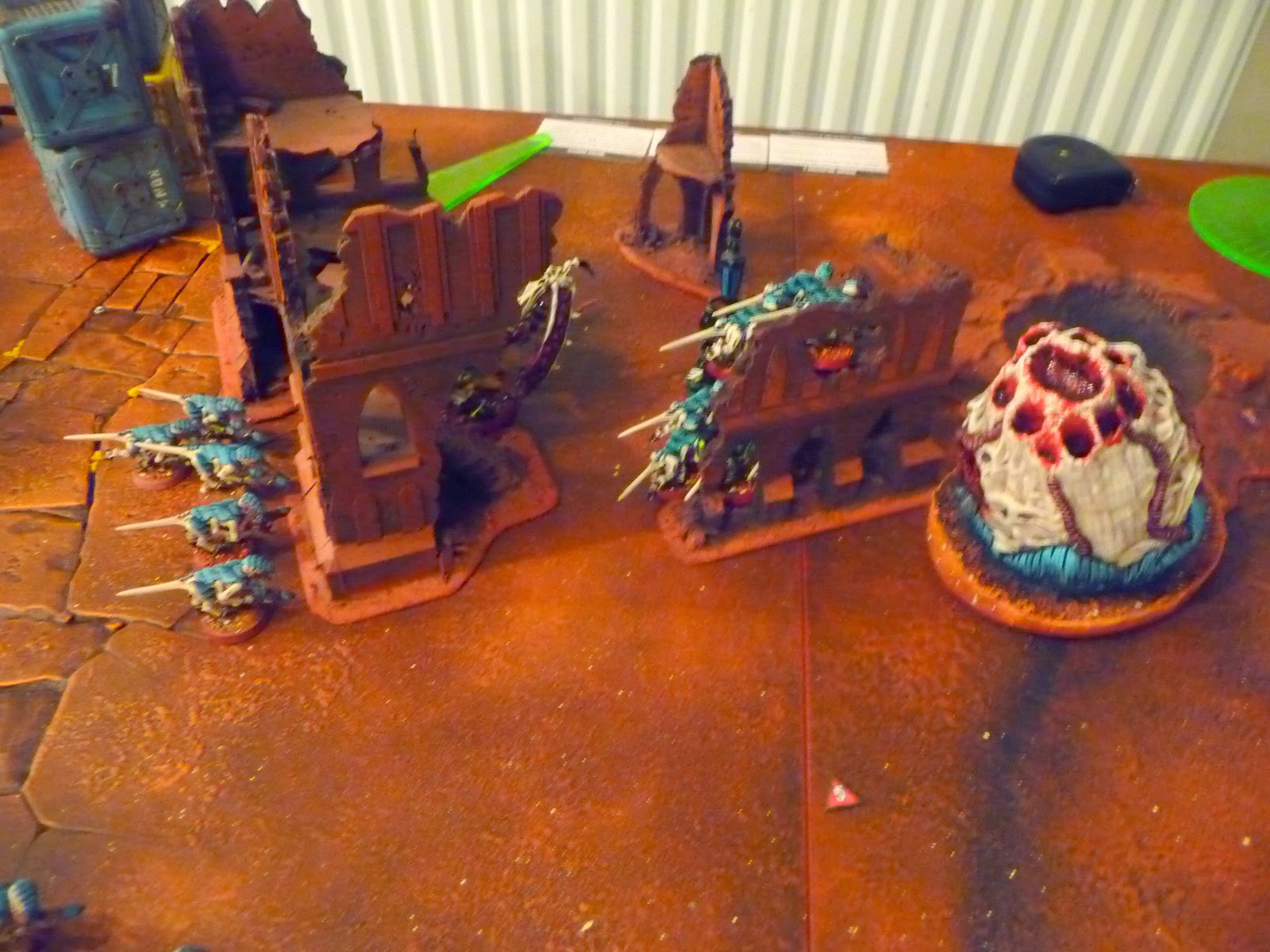 The Fire Warriors in the Skyshield rained fire on the Flyrant managing to get two wounds on it, time was running out, I'd got a Maelstrom objective that if I could kill a Flyer or Flying Monstrous Creature, which the Tau XV109 Y'Vahra Battlesuit is I'd get a VP. Also another Riptide had landed next to one of the towers filled with Toxin Stealers. It was contesting an objective that Liam needed to win but equally in this mission I can 'steal' his VP if I can get to the objective first. So I moved the Stealers out and swooped the Flyrant between the other two to shoot and hopefully pull of the Scream... 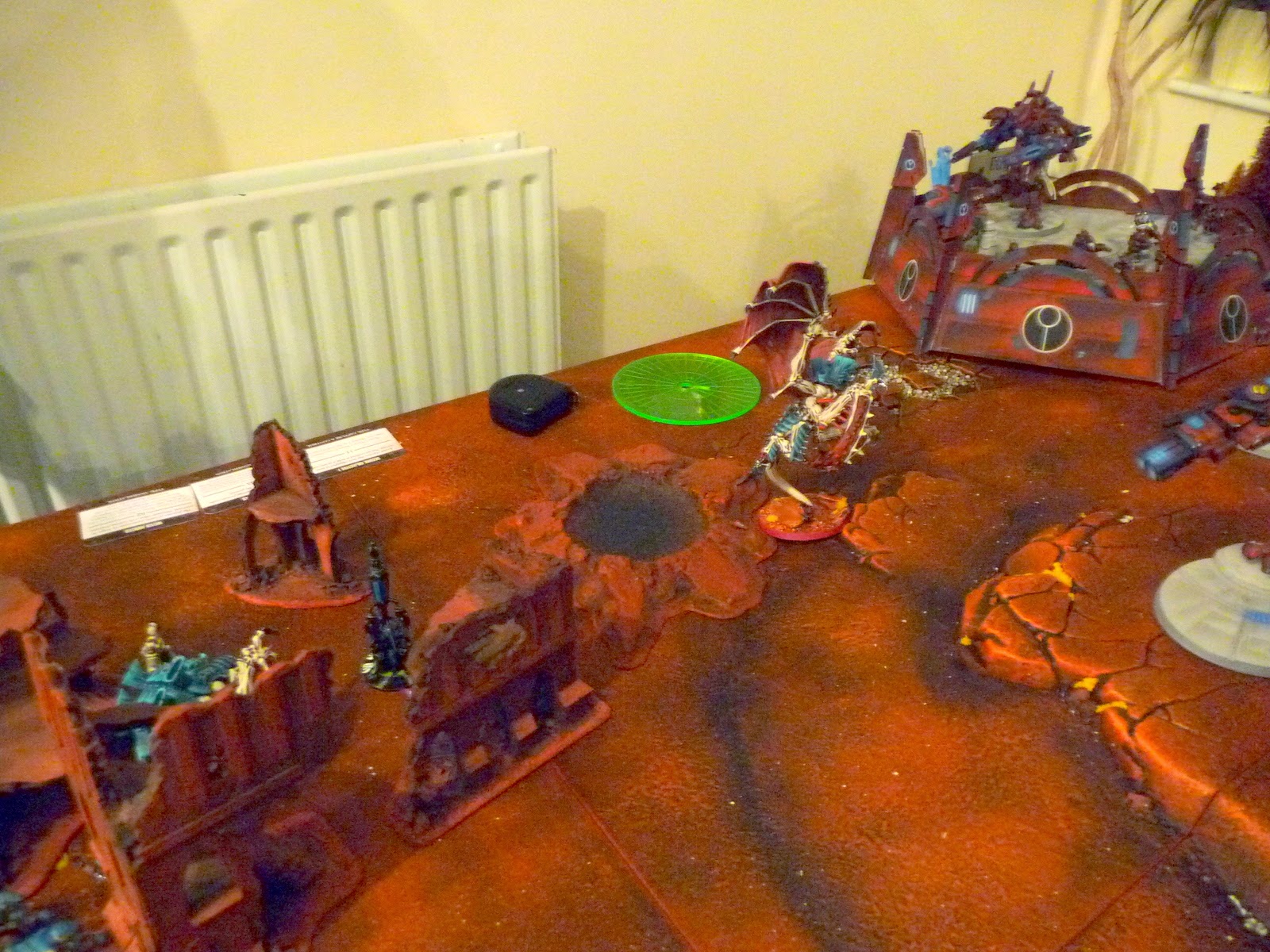 Oh, yeah, I forgot I had to do a grounding test on the Flyrant because of his wounds from the Fire Warriors, he failed and on a 2 was smeared across the iron rich Ferron Proxima wasteland! This gained Liam Slay the Warlord and another Maelstrom objective VP taking him to 6. However I somehow manage to gain a VP, presumably from holding and objective as I wasn't killing anything, and that puts us on 6:5 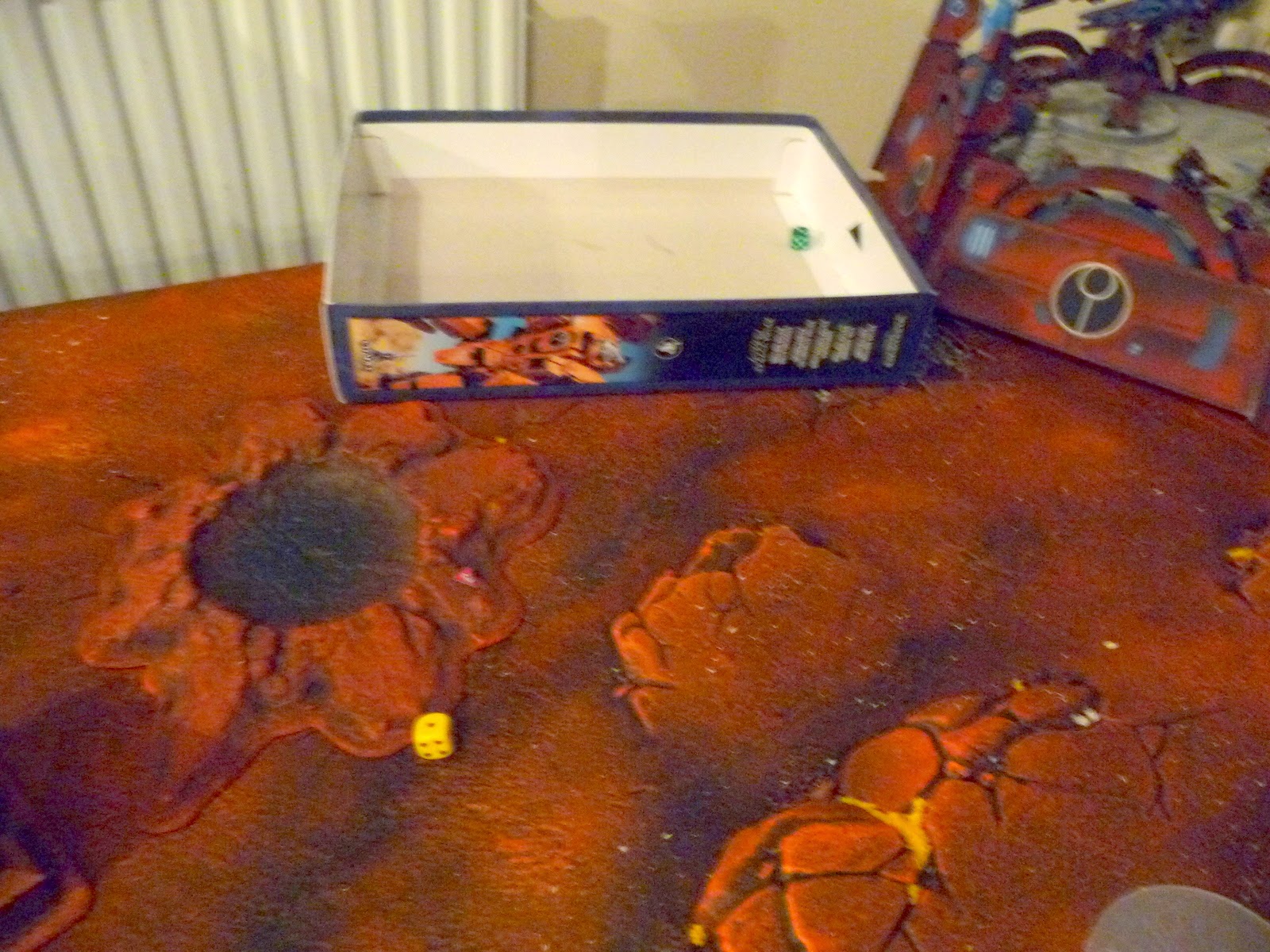 The Genestealers burst from the building but the Riptide was overwatching on 5+ and twinlinked, ultimately only one Genestealer made it into combat. 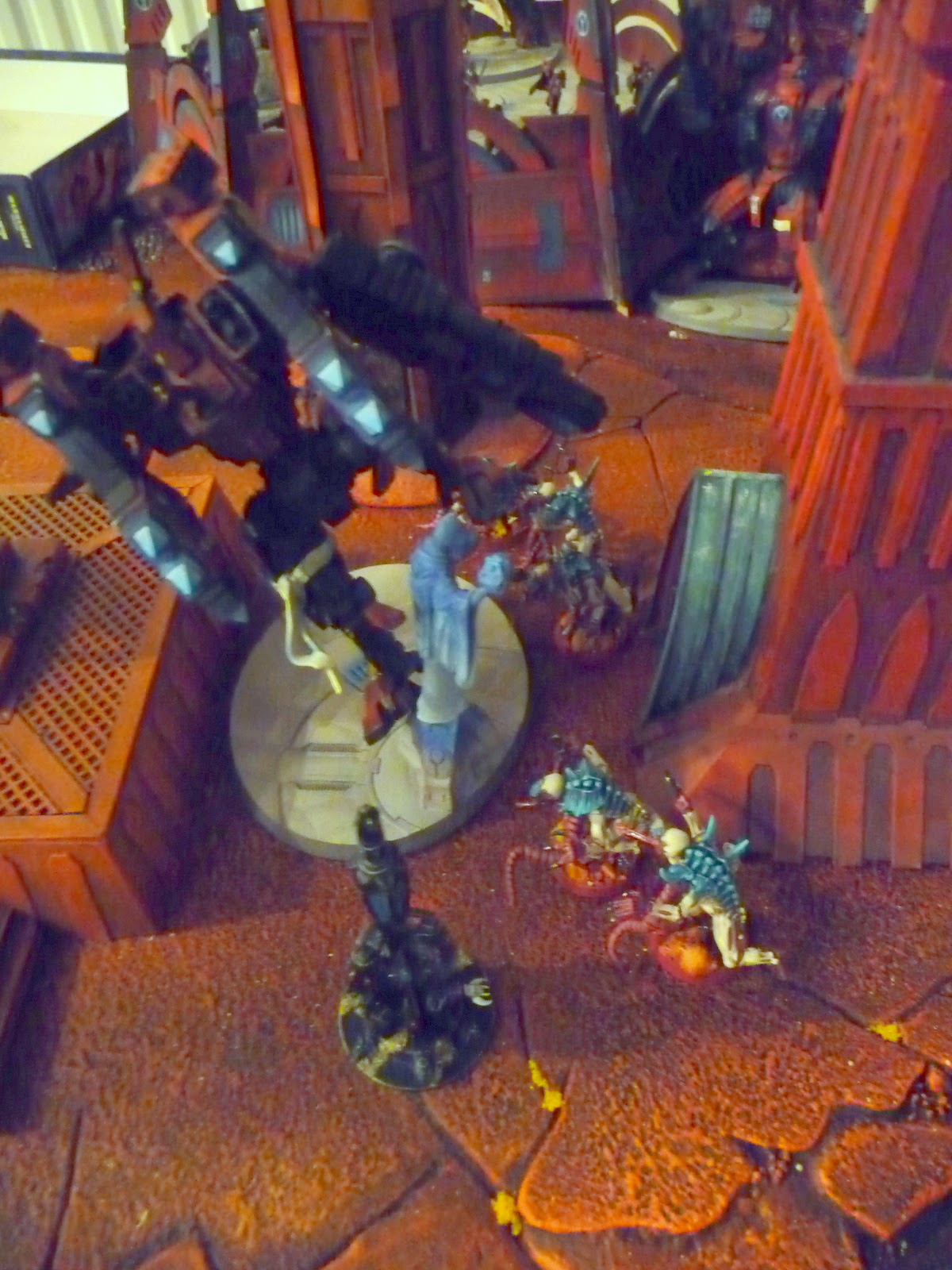 and was stomped flat by the Riptide after it managed to cause one rend on it's battlesuit. This allowed Liam to secure the objective and win and with another one his end VPs were 8. I managed another objective VP bringing me up to 6 although I probably had Line Breaker too, so the final score was most likely 8:7 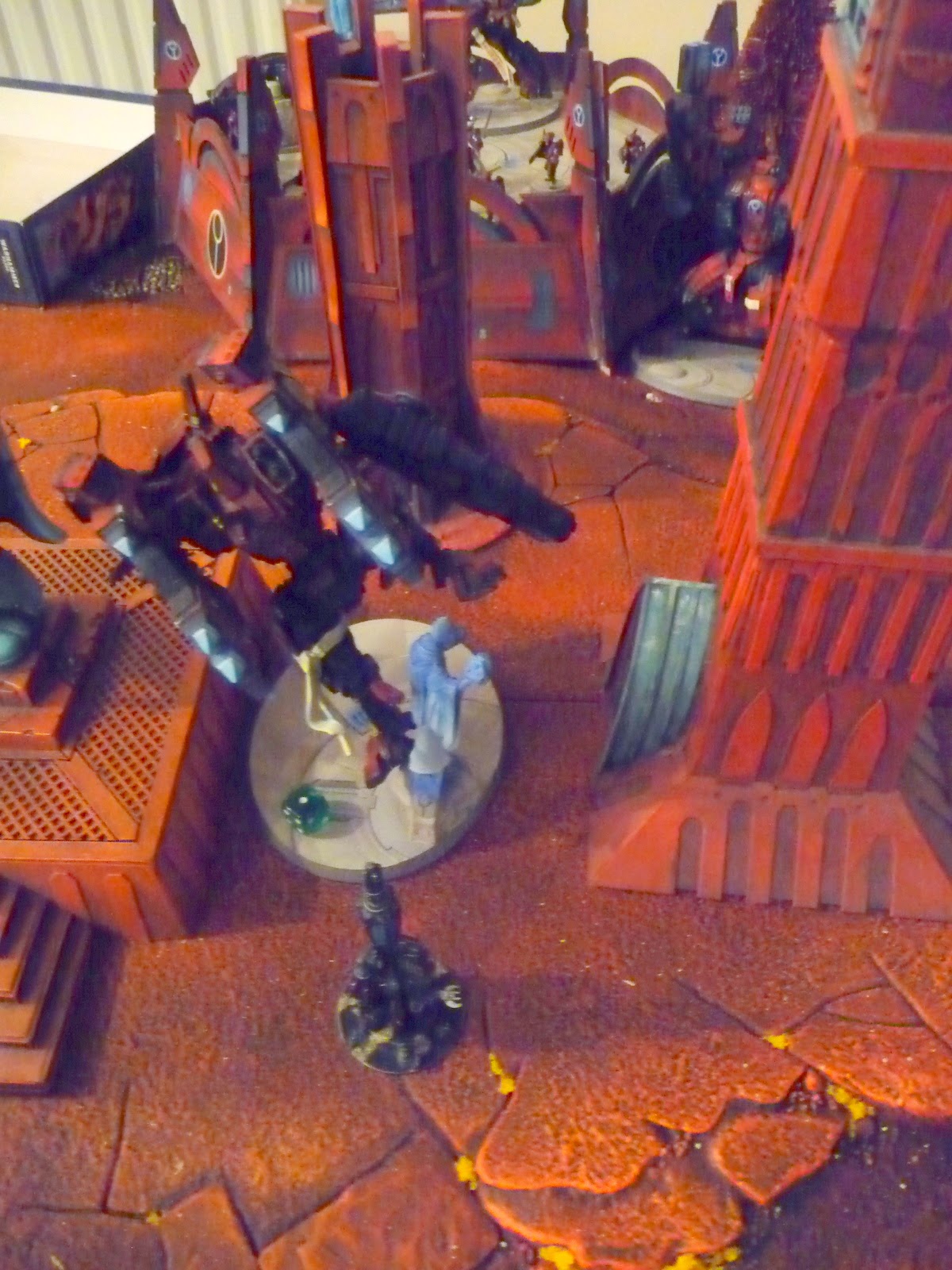 Which means Liam won the 40k addict 40k @ 40 Bash - look at his little face with the coveted trophy, not to mention the £40 worth of GW vouchers my wife included in the prize! And to think he went from the Blog Wars 8 loser spot to this in a matter of a few months! ;) 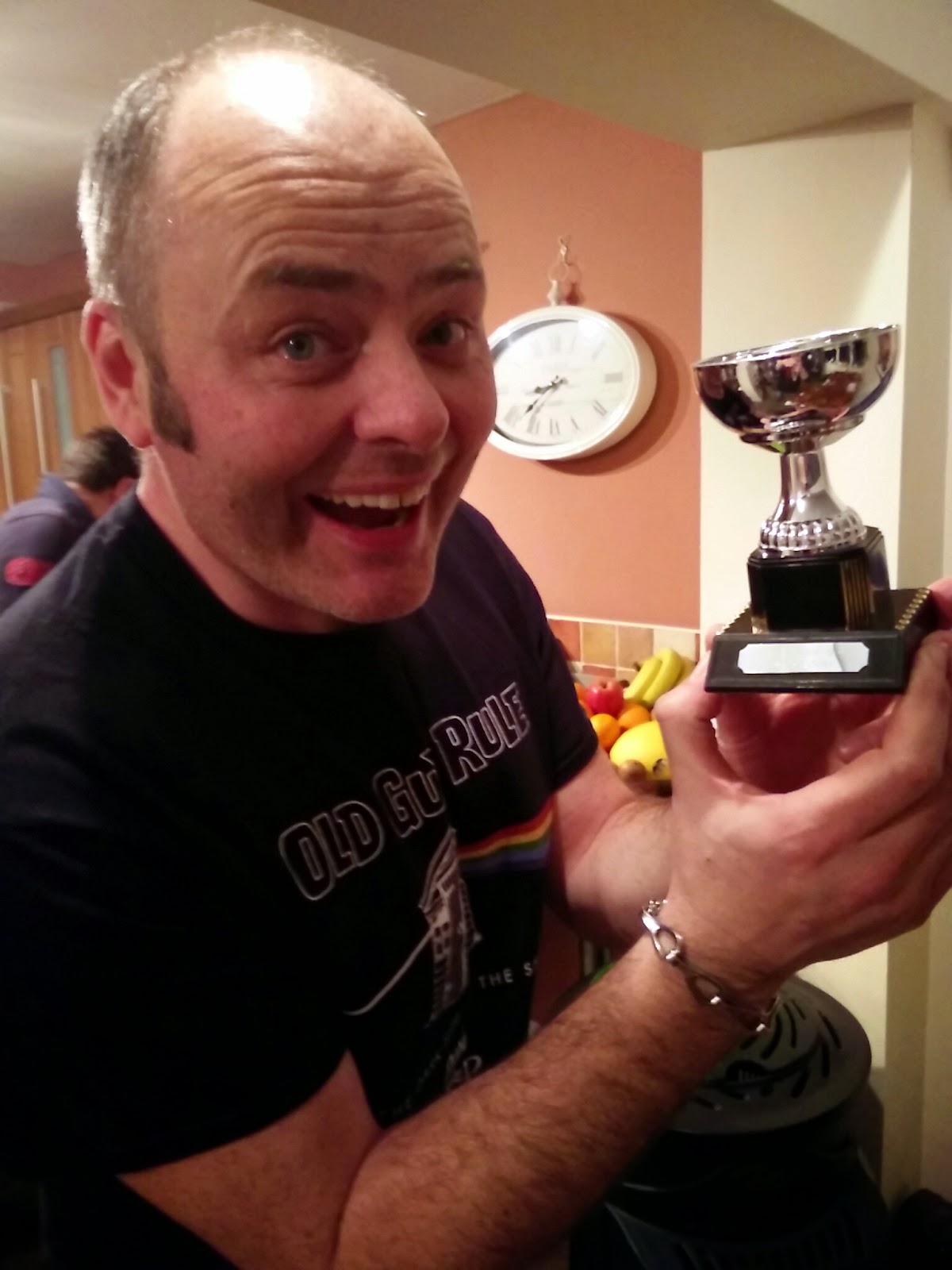 I can't convey just how much I needed this. Aside from it being fun to be with your mates and for us to finally play a game this year but that 40 number can be a big deal and particularly the events surround this day in previous years. I'd been first thing to the car park where my Dad was knocked down and put some flowers there to remember him by. It was quite emotional but then the simple camaraderie of playing toy soldiers for the day helped get me through, so thanks guys, and als a big thanks to Jo, Ben's wife for letting me hold it at their house and another big thanks to my wife for suggesting/supporting it  and my own kids for letting me out for the day when they may have wanted me to celebrate with them. 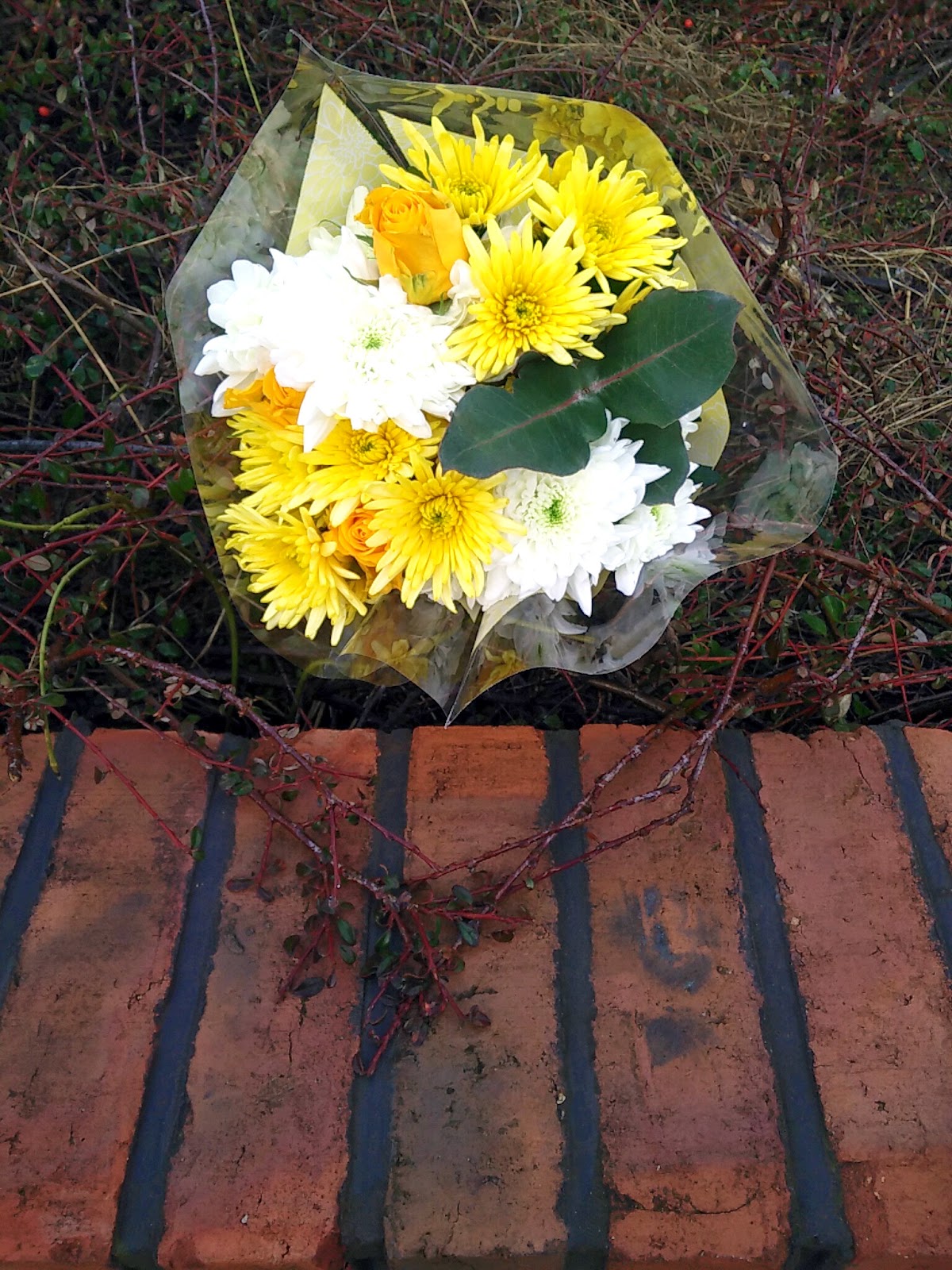 UPDATE: Liam reminded me that Psychic Scream did in fact get manifested, it took wounds off all three Riptides and was instrumental, alongside the Brainleech worms in destroying the Fire Warriors. funnily enough when I mentioned it I suddenly had this vivid memory of one of his Leadership dice rolls that stripped a lot of wounds off something. Understandably this suddenly became the biggest threat to him, hence why he was so scared when the Flyrant swooped next to them again late in the game only to be relieved when I remembered I'd not done the grounding check so we moved it back, rolled, failed, died and won Liam the game!
Posted by 40kaddict at 12:08