Another model finished! It's almost as if I have some mojo back! Well, almost. Anyway the Malanthrope is done. 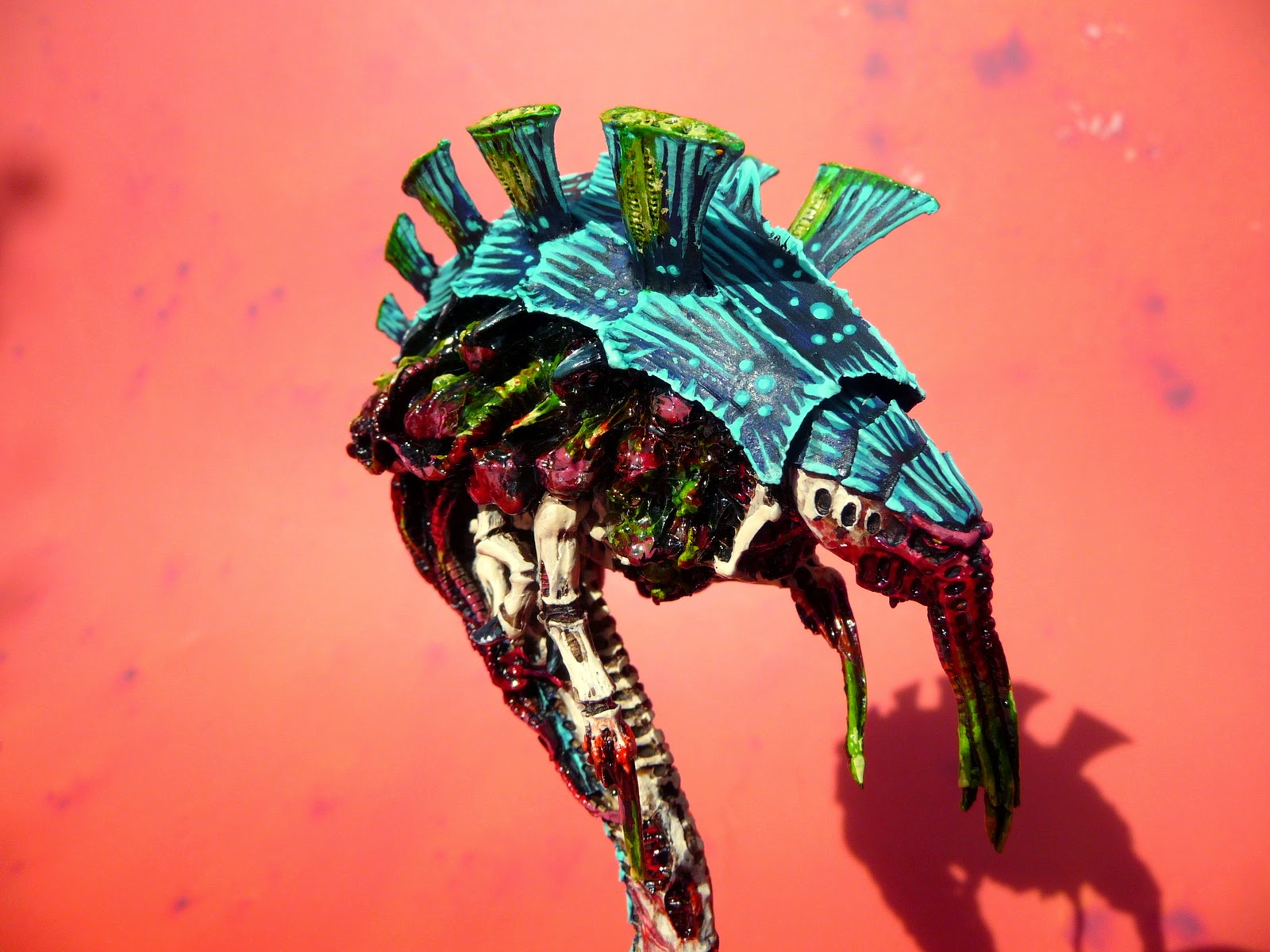 I actually lost my patience with this part way through, all those sacks and tentacles became a real chore so I splashed on the toxic glow effects and although the end result is scrappy in some places the gore and gloss slime actually makes the model for me, so I'm actually really happy. 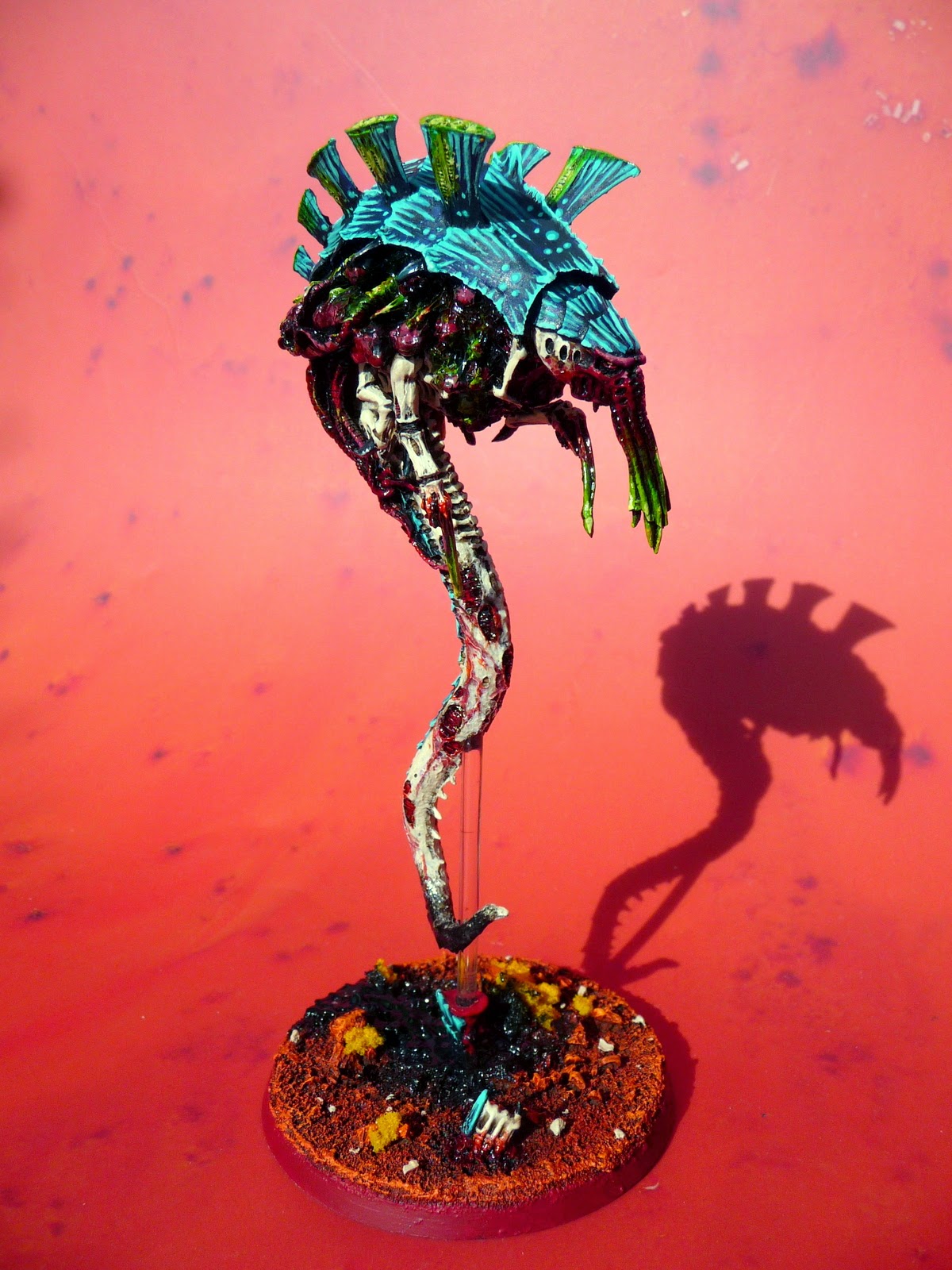 The base has also come alive thank to the black dead toxic slime that is left in the wake of the Malanthrope. Sure it's another effect I've just thrown into the mix but it makes things interesting, the base was so empty it needed something to 'liven' it up or at least break up the orange. 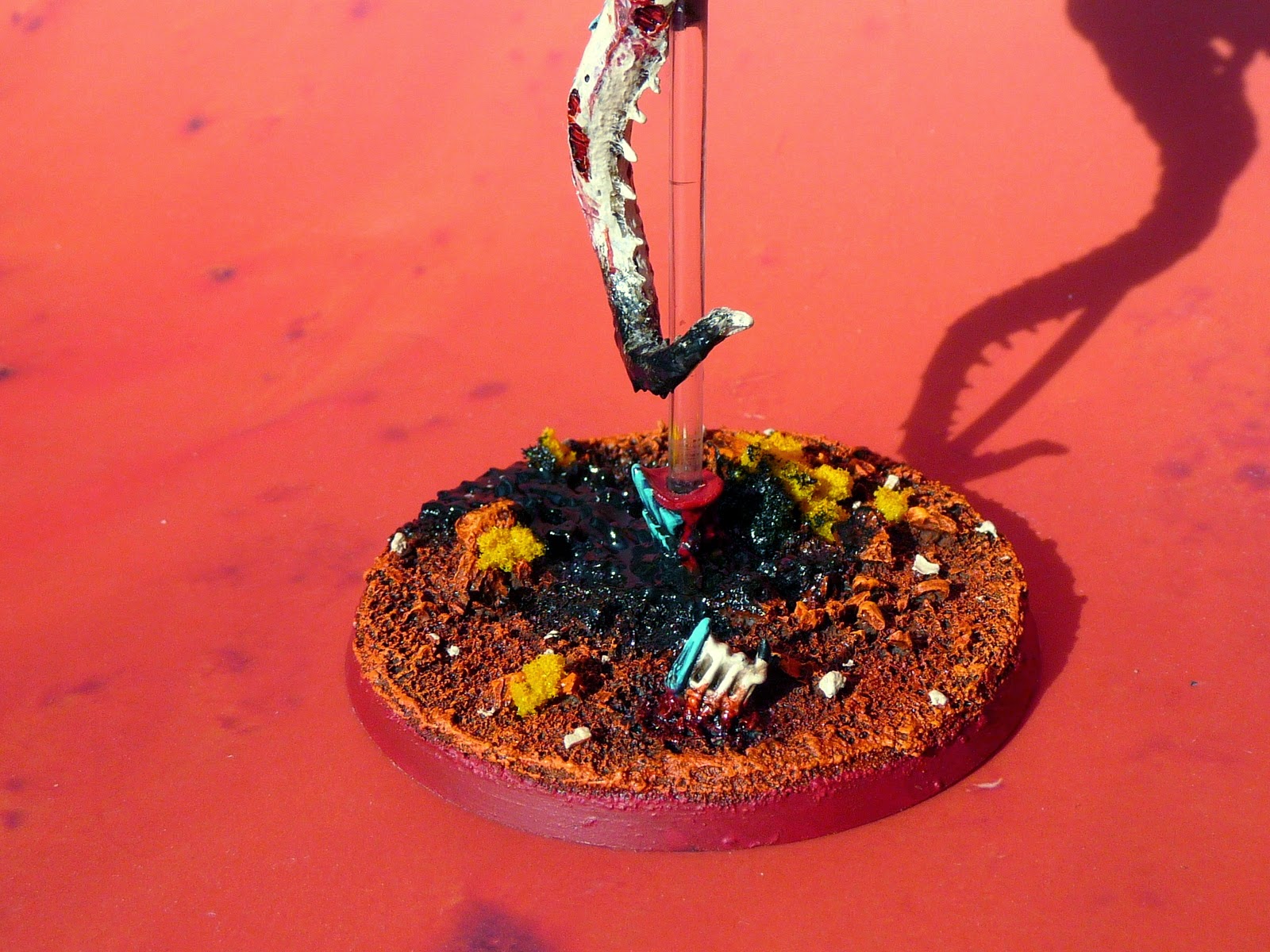 I really like how the acrylic rod almost disappear in this I'll probably Photoshop some of these to remove it. I kind of wish I could make some 'toxic miasma' somehow but I'm not sure if stuffing fluff, the sort use din most flickering smoke clouds is the effect I'm after. 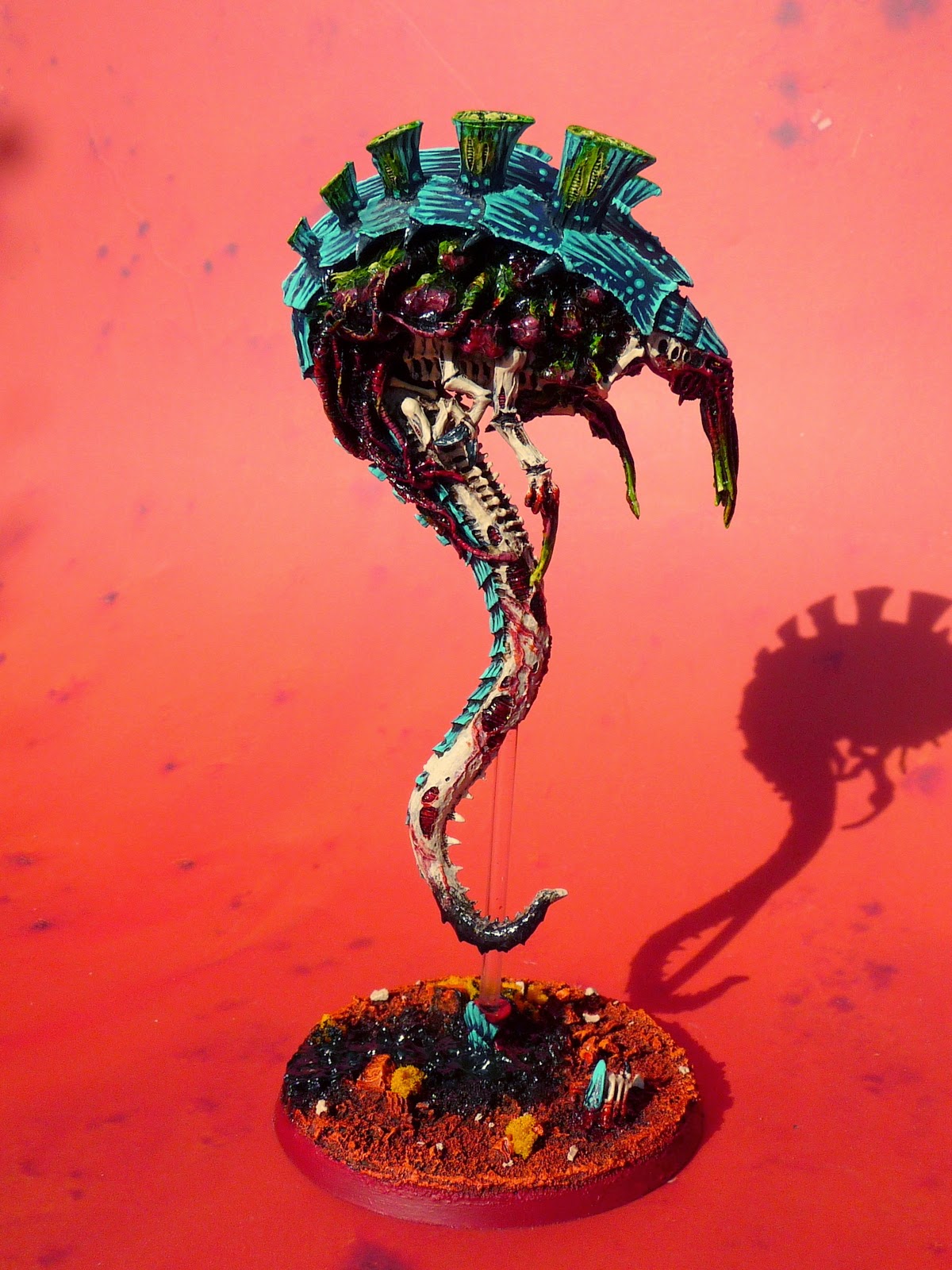 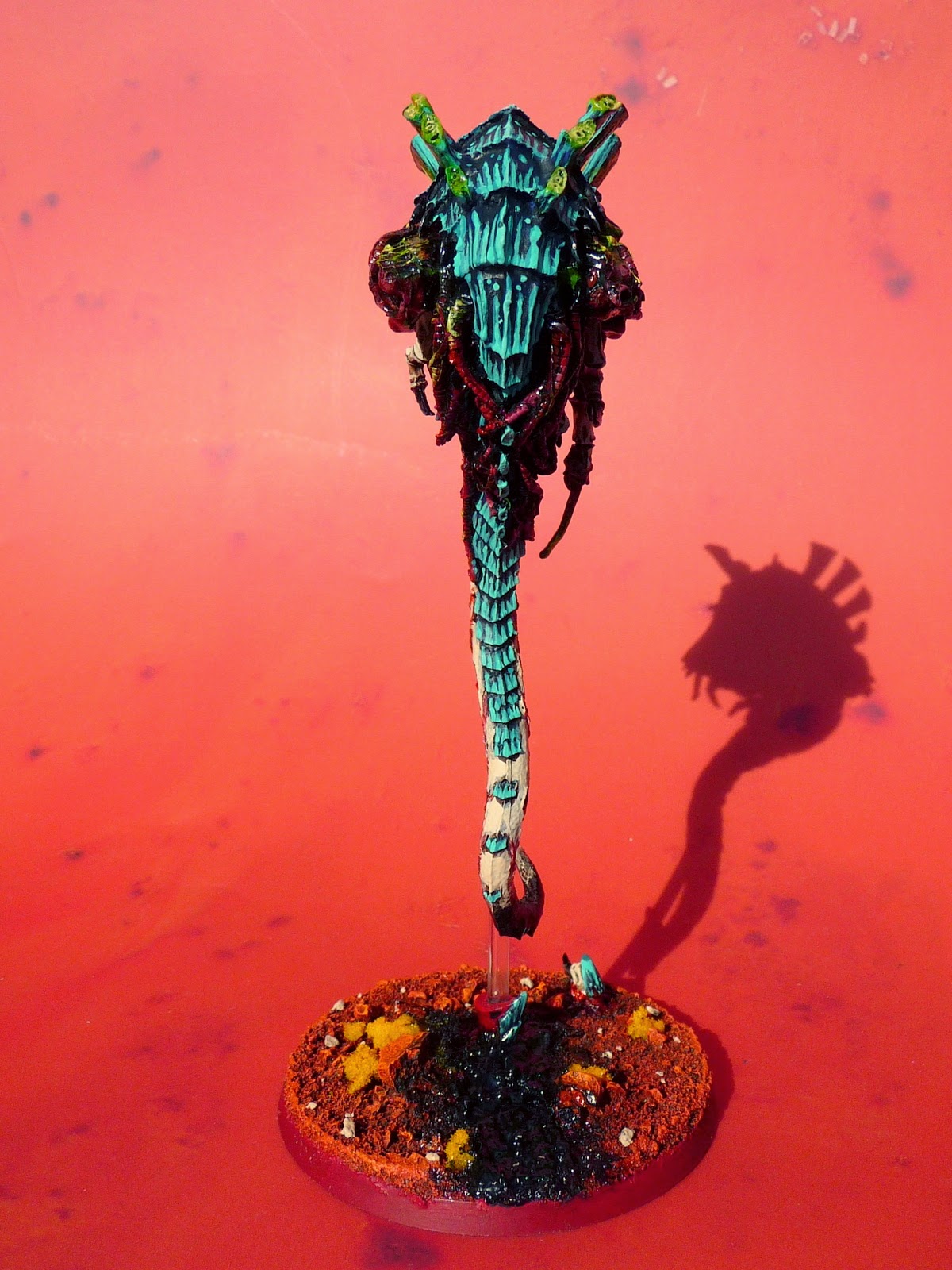 Still, I may have a play around at a later date, see what effects I can come up with. 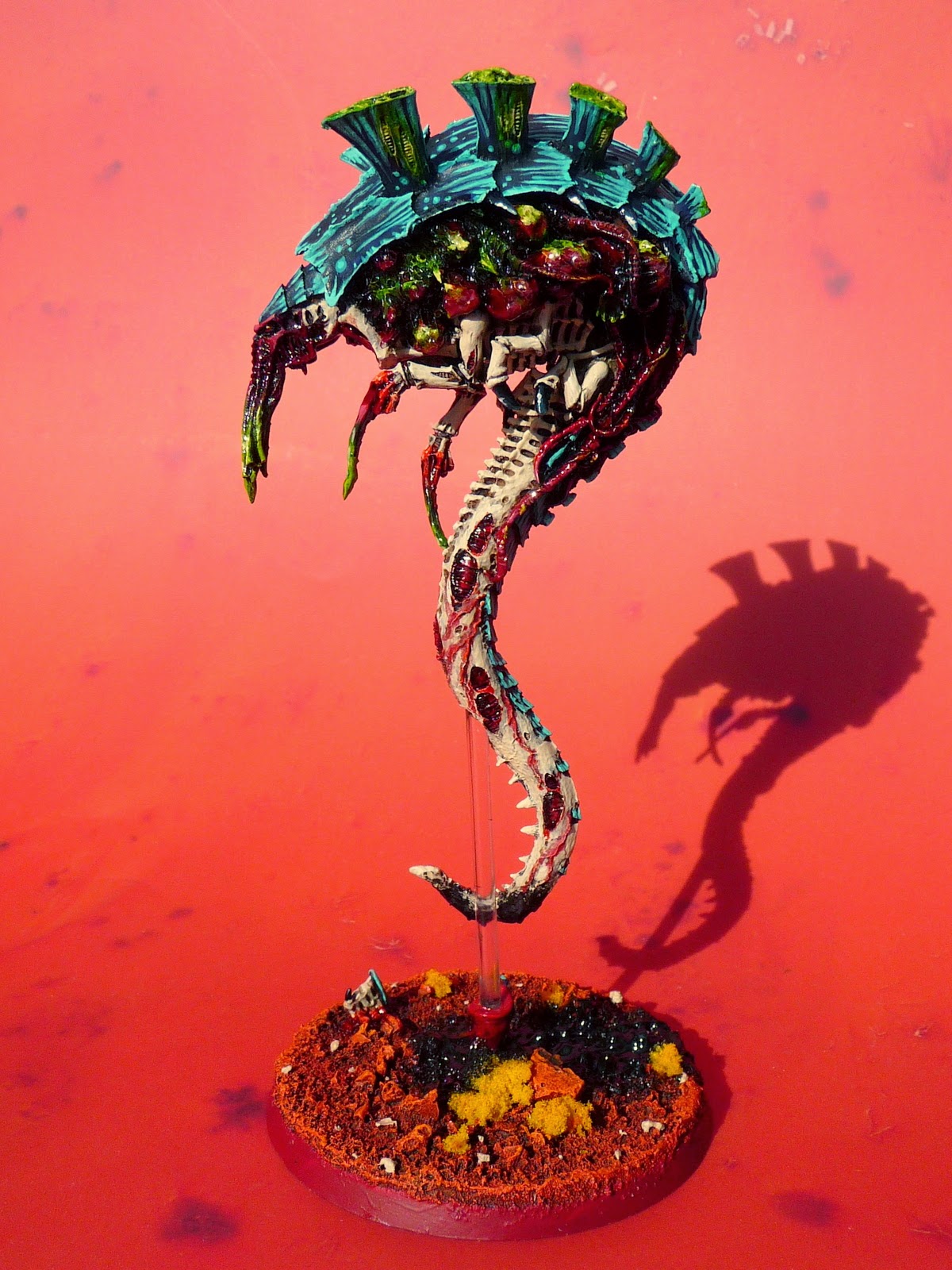 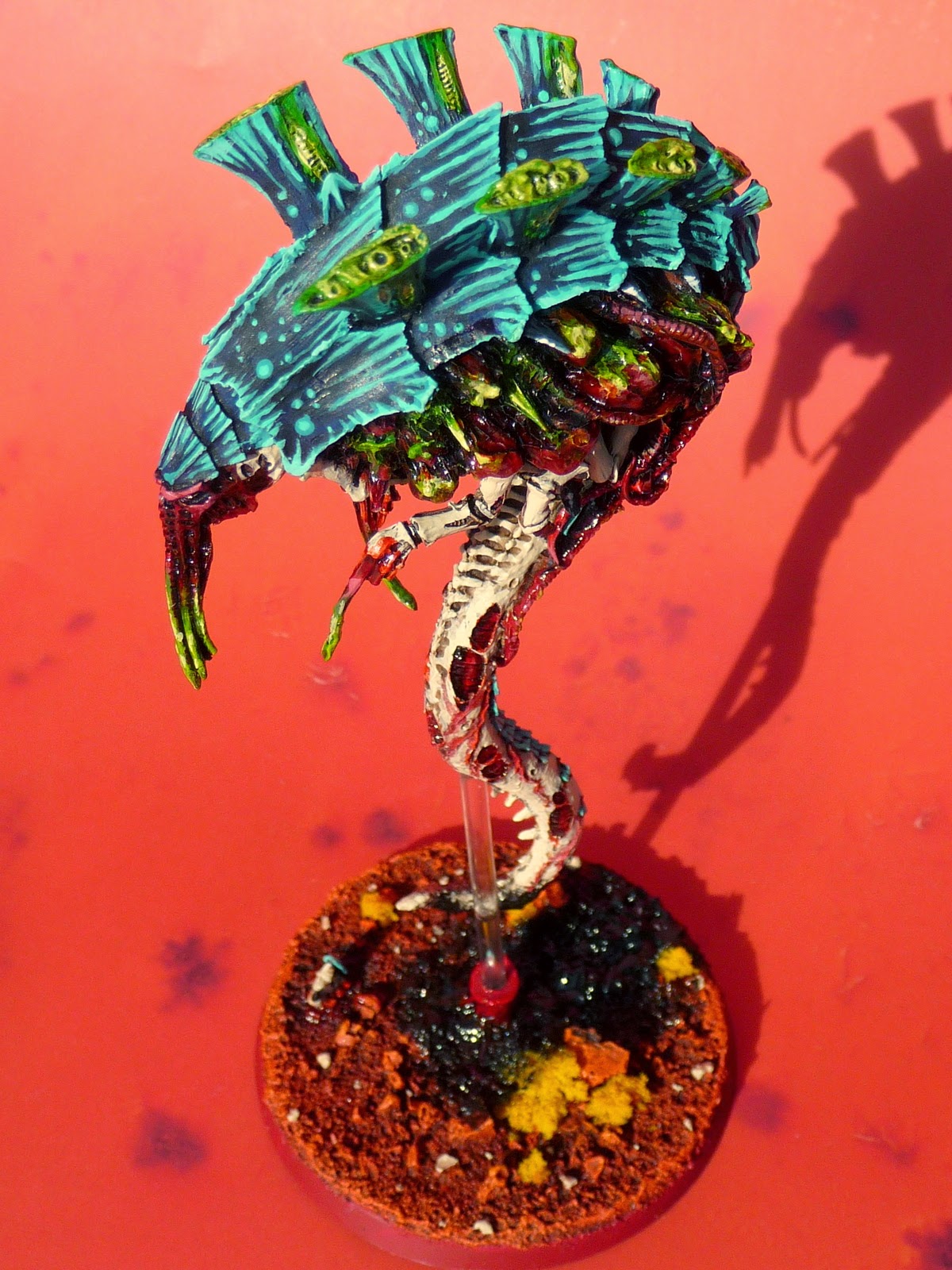 I actually photographed this outside, it was a lovely sunny day, hence the super bright colours and crisp shadow. 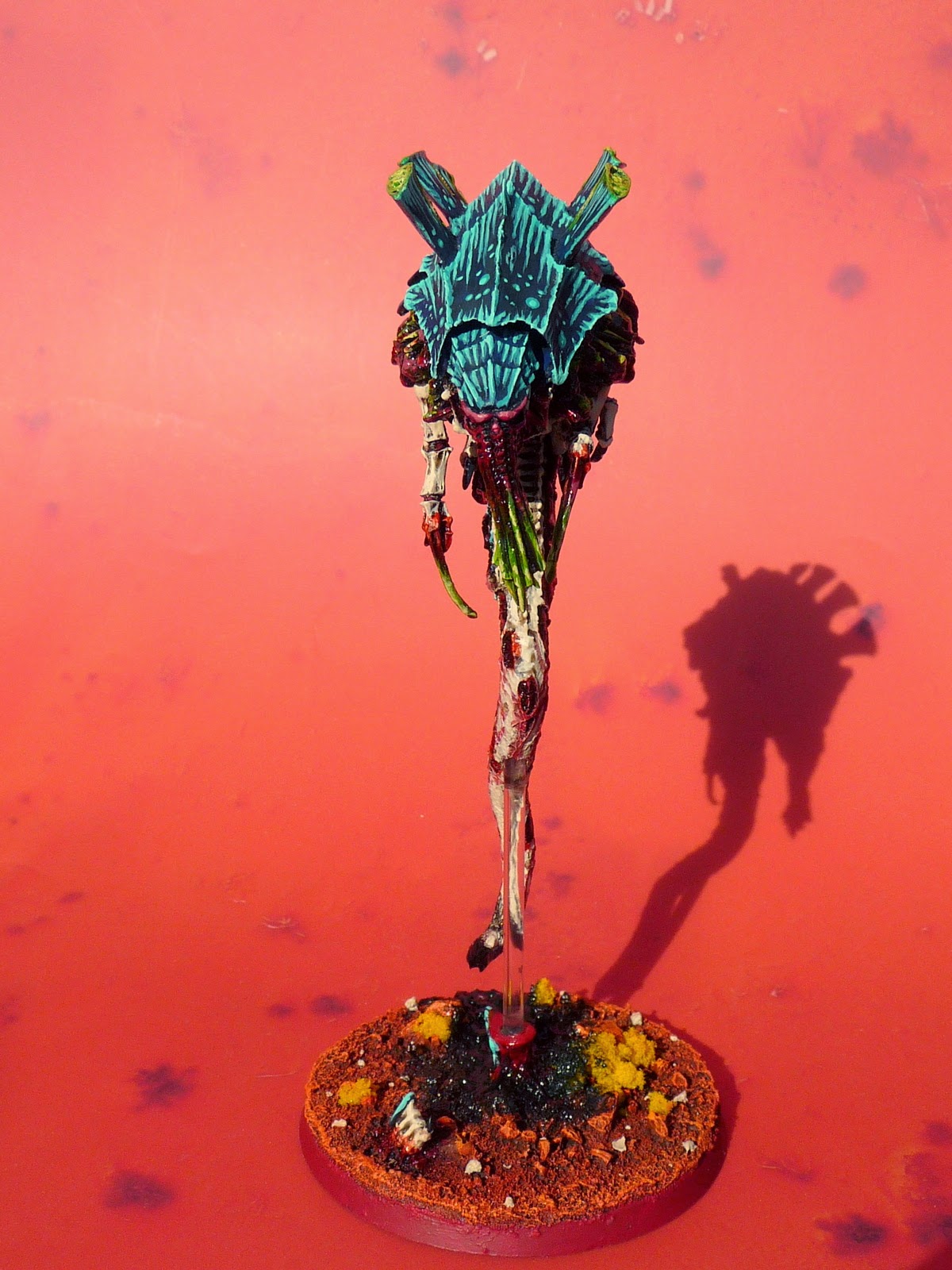 I do wonder if I should have put more pure white highlights in the centre of the vents... 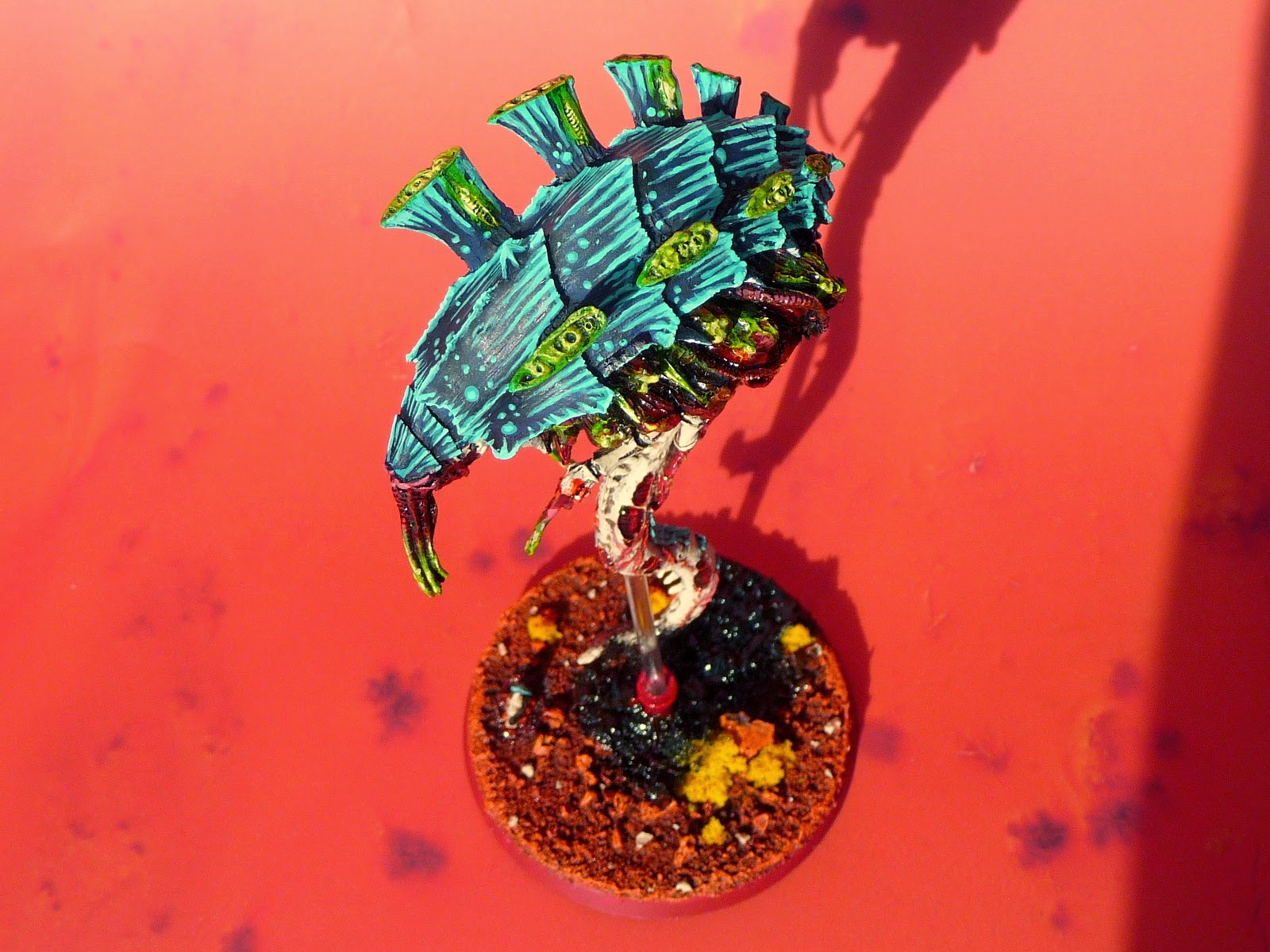 I do think this guy is very creepy, his eyes are tiny, which made me think there wouldn't be much character in him but there is something disturbing about him. 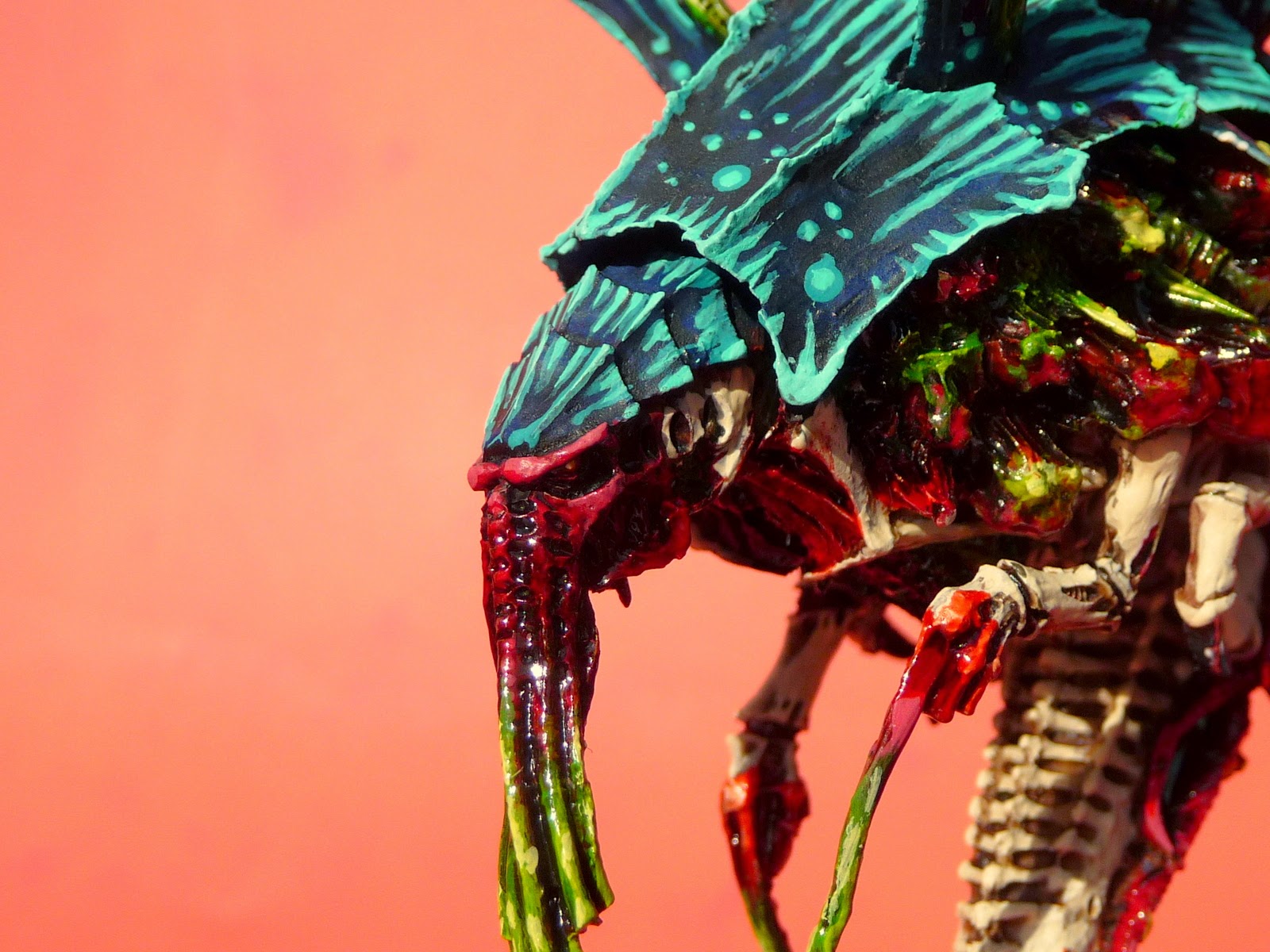 You can see here just how scrappy I was with the painting but with all the Tamiya Clear Red X-27 and gloss effects applied I may well have been more disappointed if I'd put tons of effort into getting it just right only to cover it in gore! So the right choice I think. 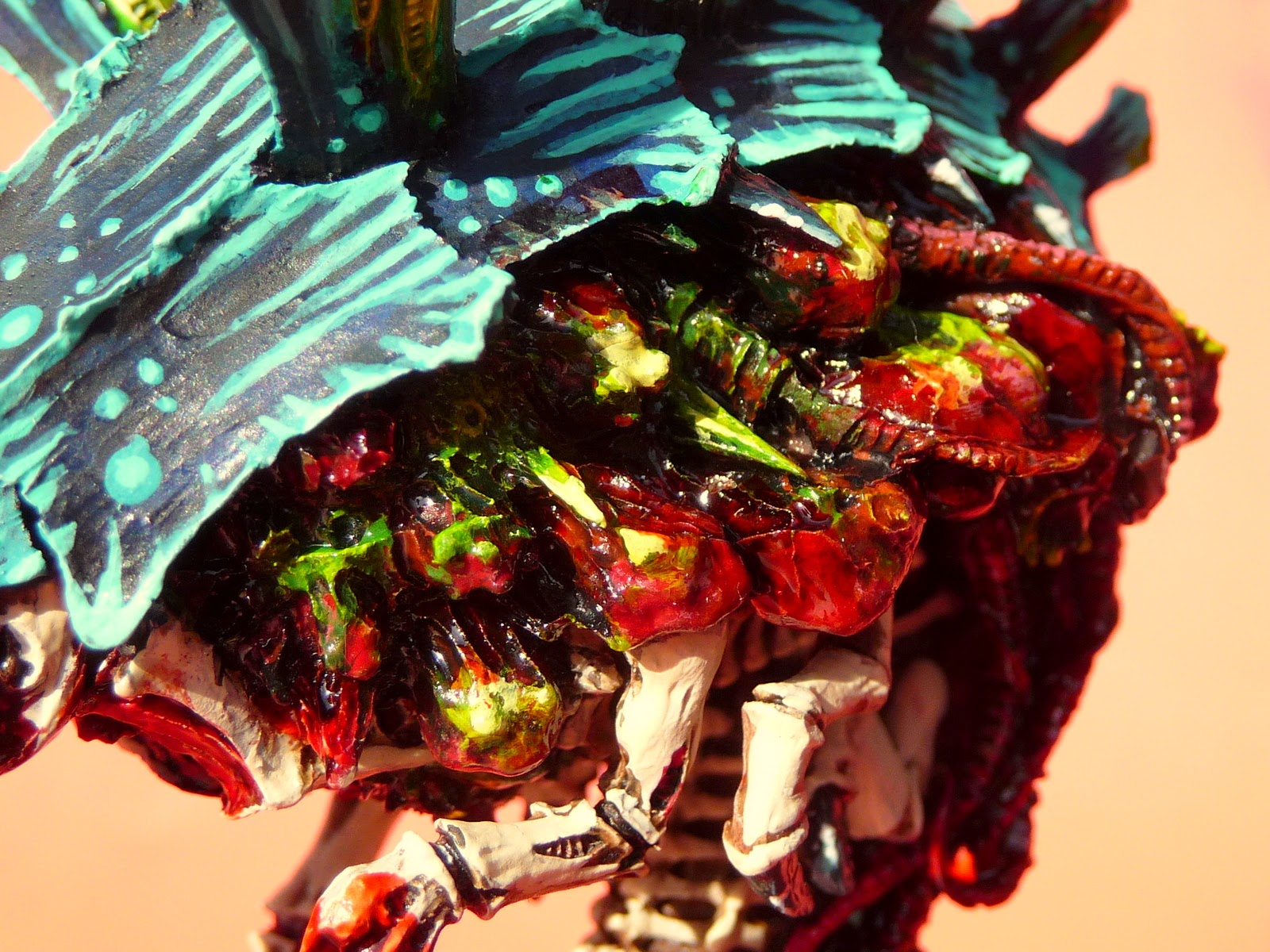 I even managed to get some of the pure Bahama Blue showing through, more recently this has been totally covered up by the Soft and Strong Tone washes applied. 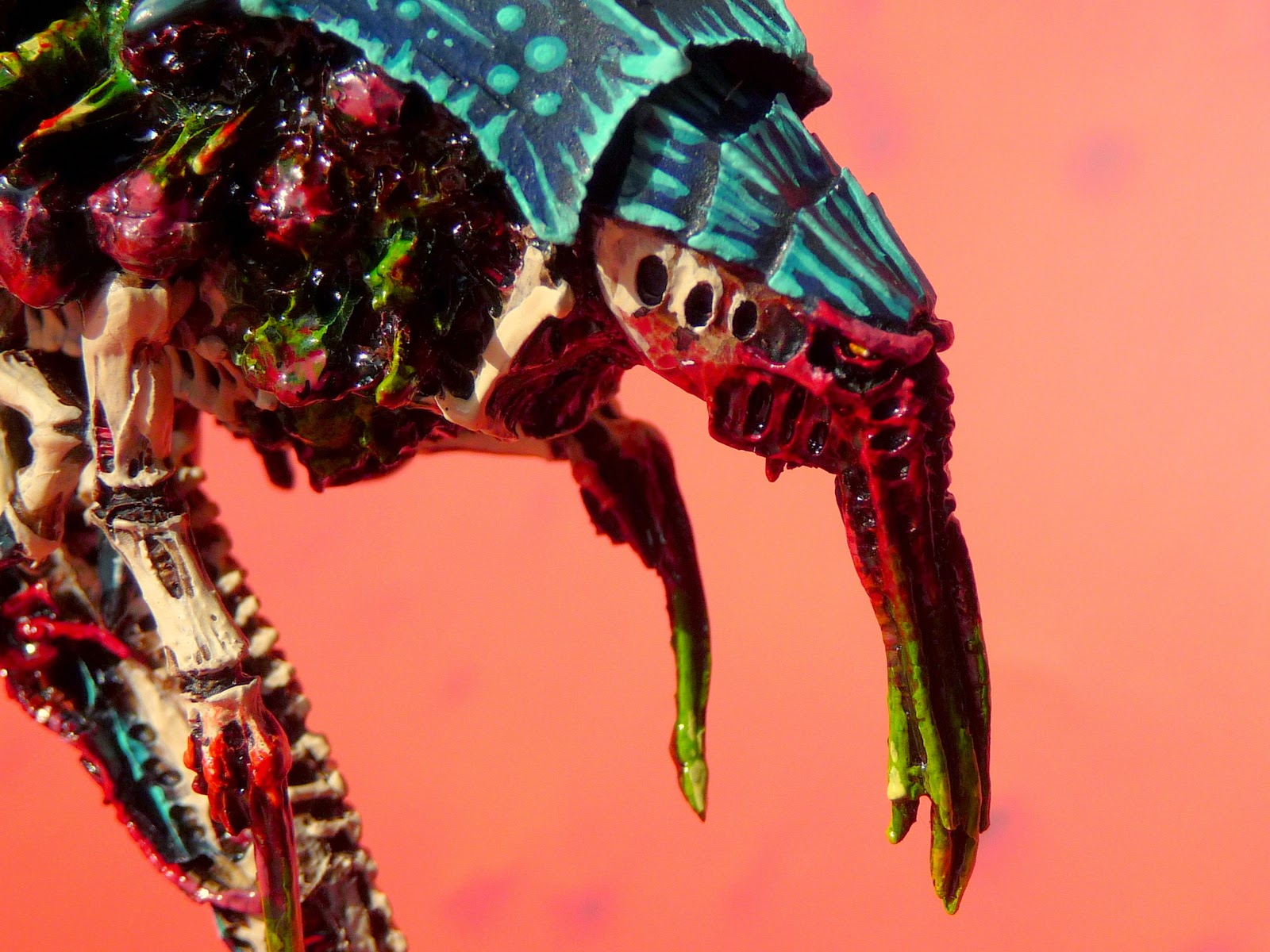 You can definitely see my brush control on the striations is worse. I got some new brushes but I know it's just lack of patience. 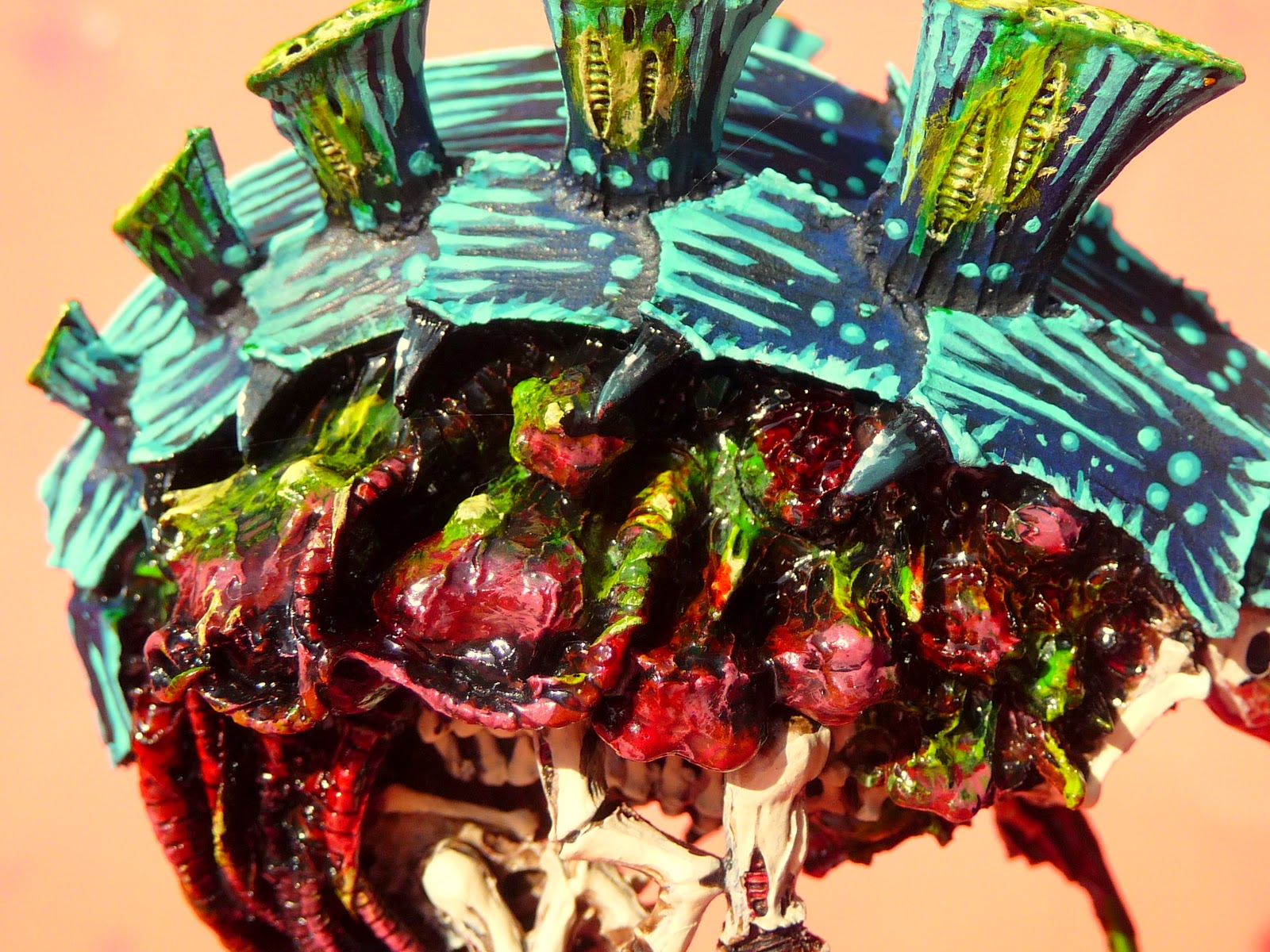 And bottom line it's done and I think back to those days in my parents loft when I'd spend forever not getting anything painted only to see Liam churn out army after army. Now I've got an army [and more] painted and it's coming to terms with what is achievable within my ability and I'm happy with the result, despite it;s imperfections. 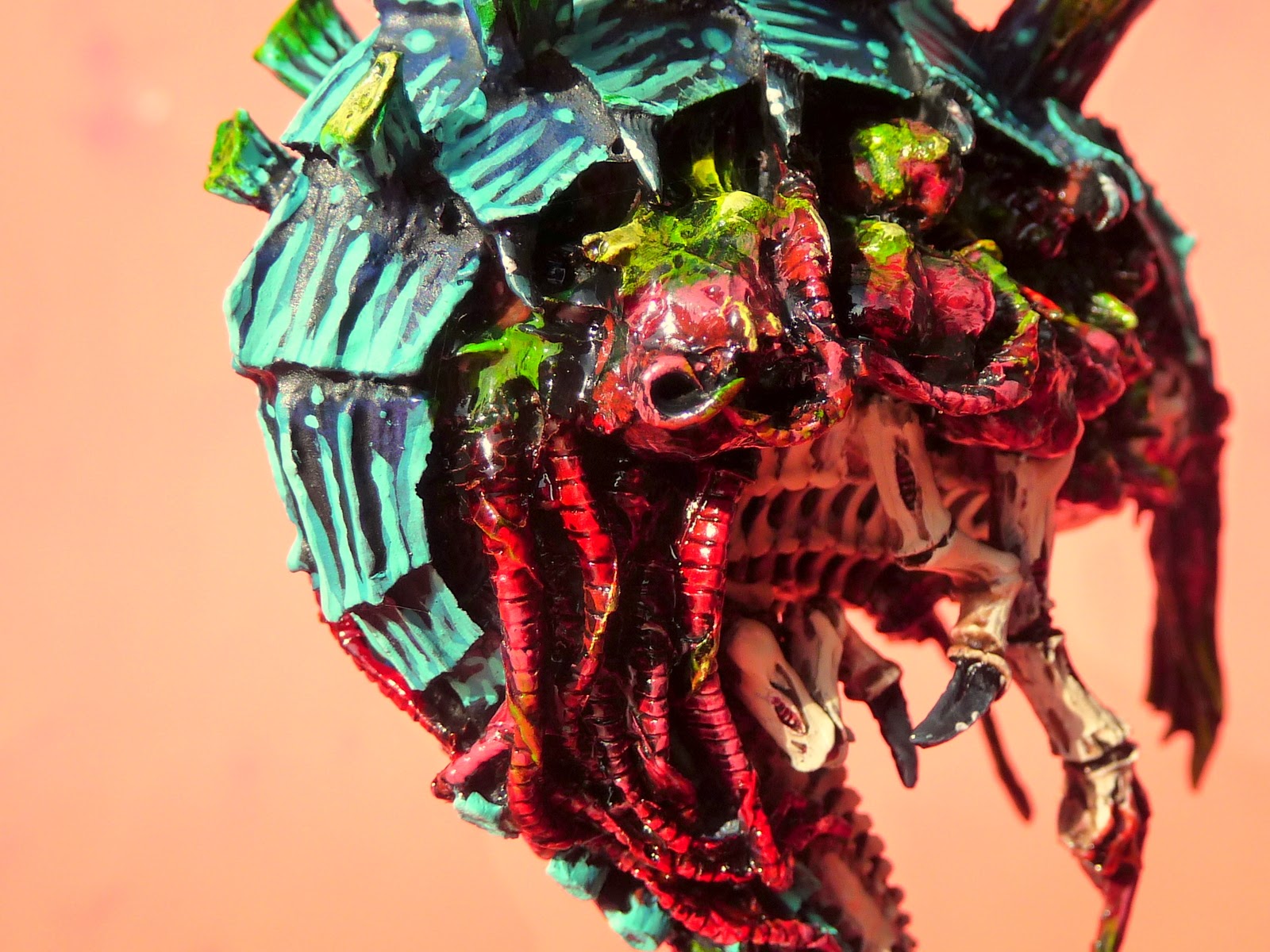 Now to add some more black gunk to the base I applied some of Anita's 3D Dimensional Paint. It's a glossy black and you can paint thin line with it. I've used it on something before but I forget what. Here I added some to the base and to the the bottom of the Malanthrope, the little drippy spikes. This shows that it's coating everything around it in a life killing ooze. 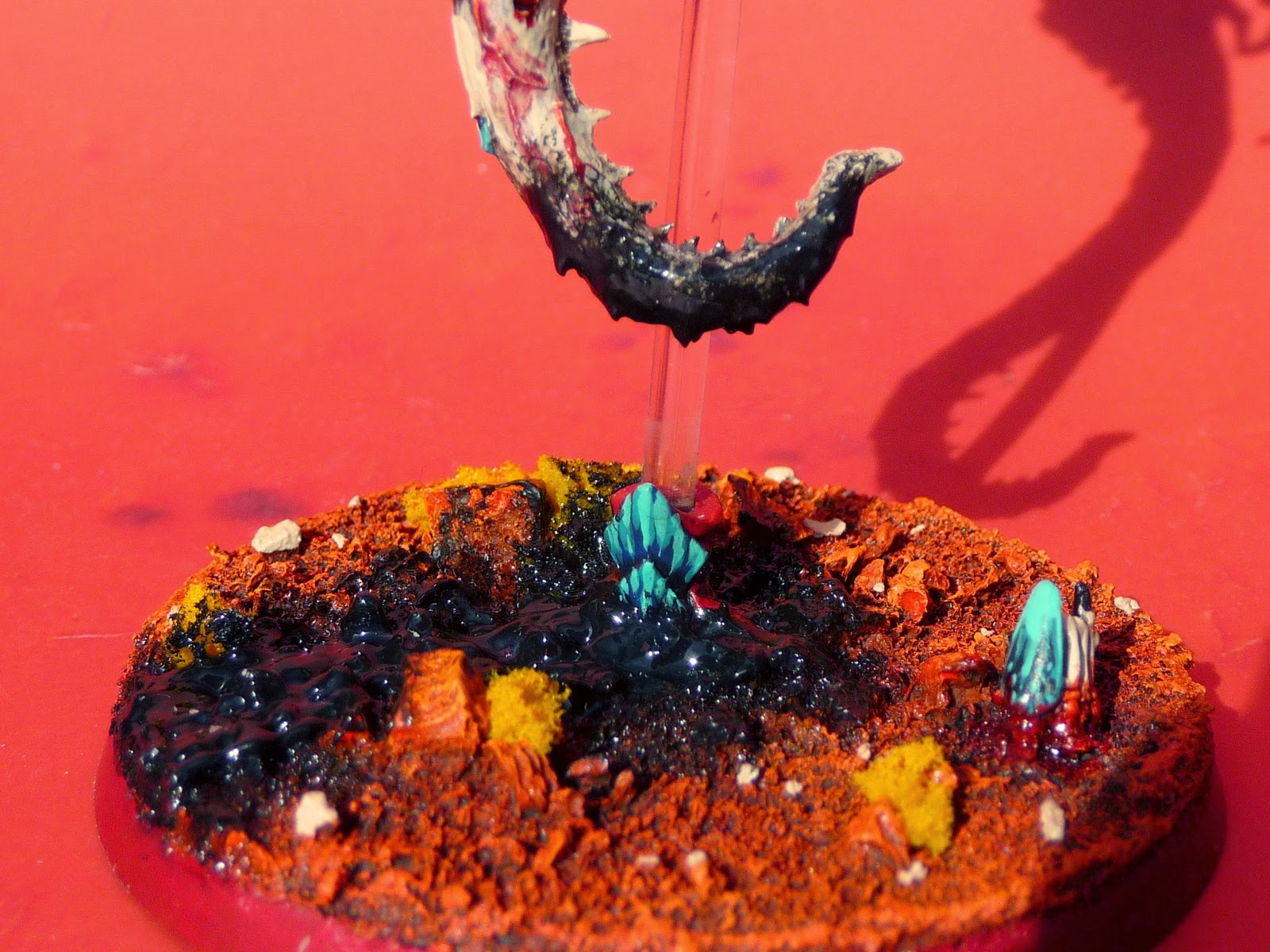 I did the same with the Venomthrope, although that was added after I photographed it properly.

The glossy black 3D paint was added in stripes over black paint and then coated with gloss varnish. I then added yet more Vernidas gloss varnish. 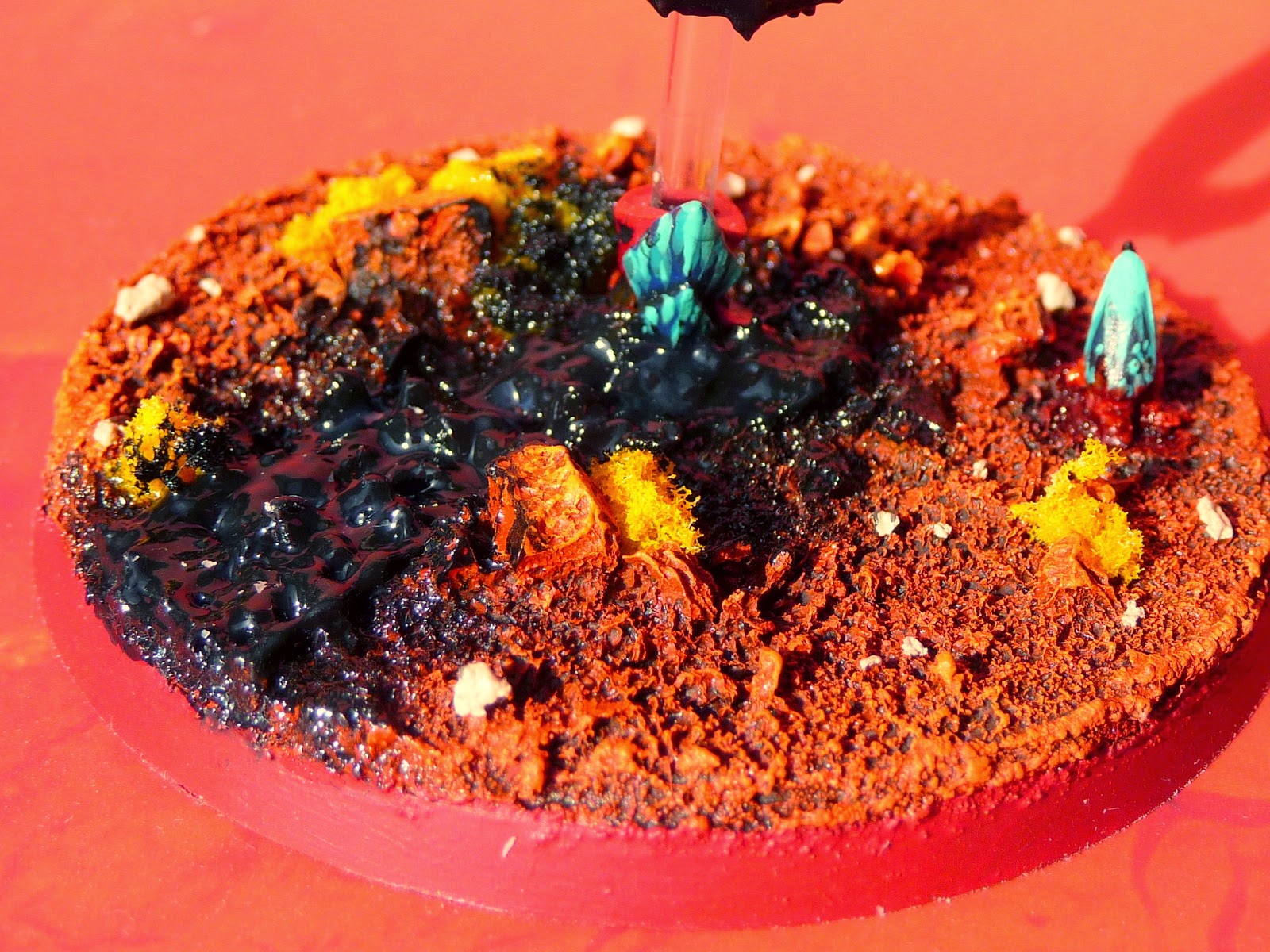 The whole thing had to look like it was turning everything into a dead black organic sludge. Which is odd considering I've got reclamation pits that are both yellow and toxic green, it's almost as if I'm making all this up as I'm going along! 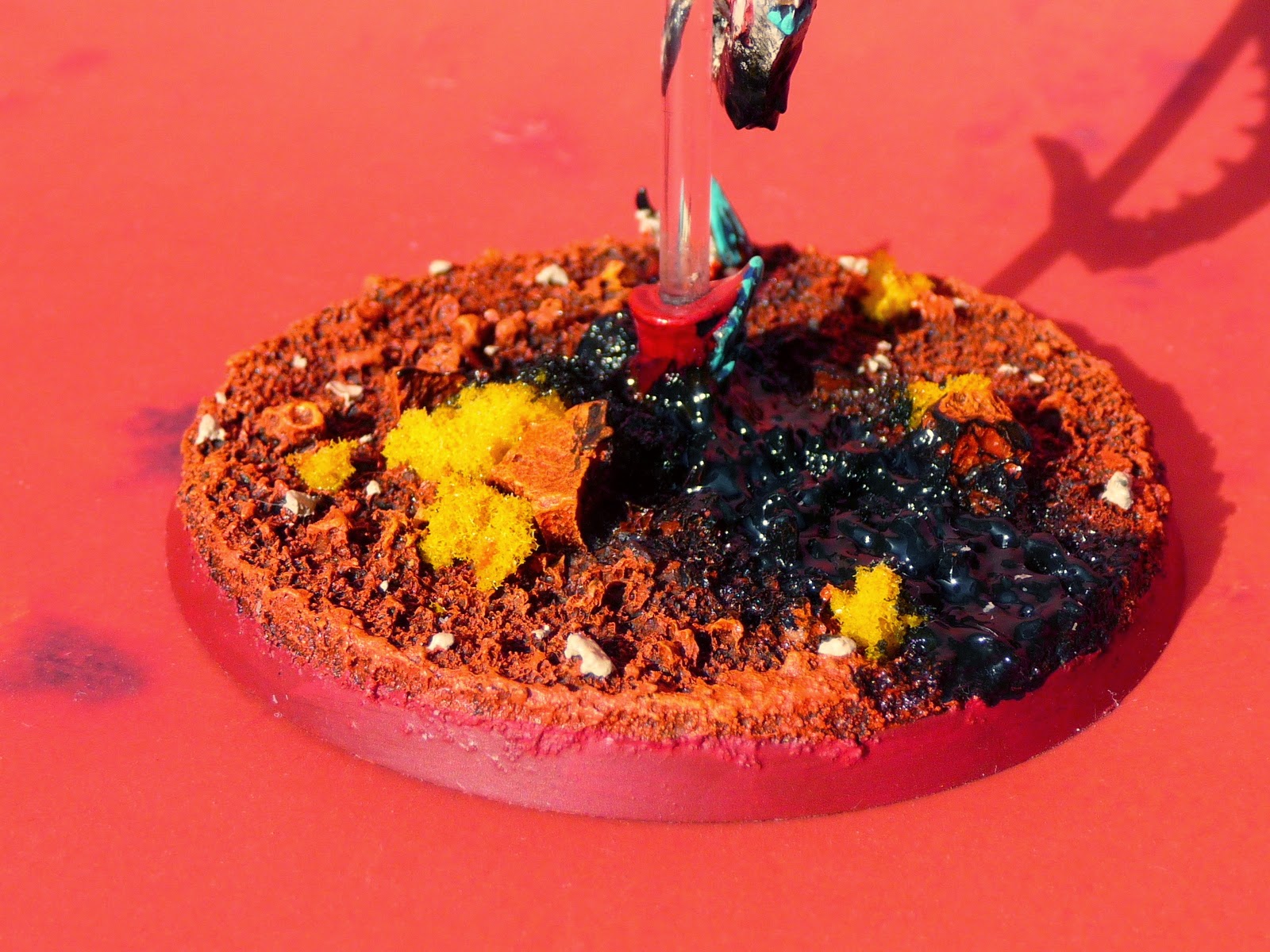 Well, it's considerably better with it black and at least it allows the Barbed Strangler 'eruption' to actually stand out. When it was all red planet based it just disappeared now it actually look like it has a purpose - what that is I don't know but it kind of makes sense. 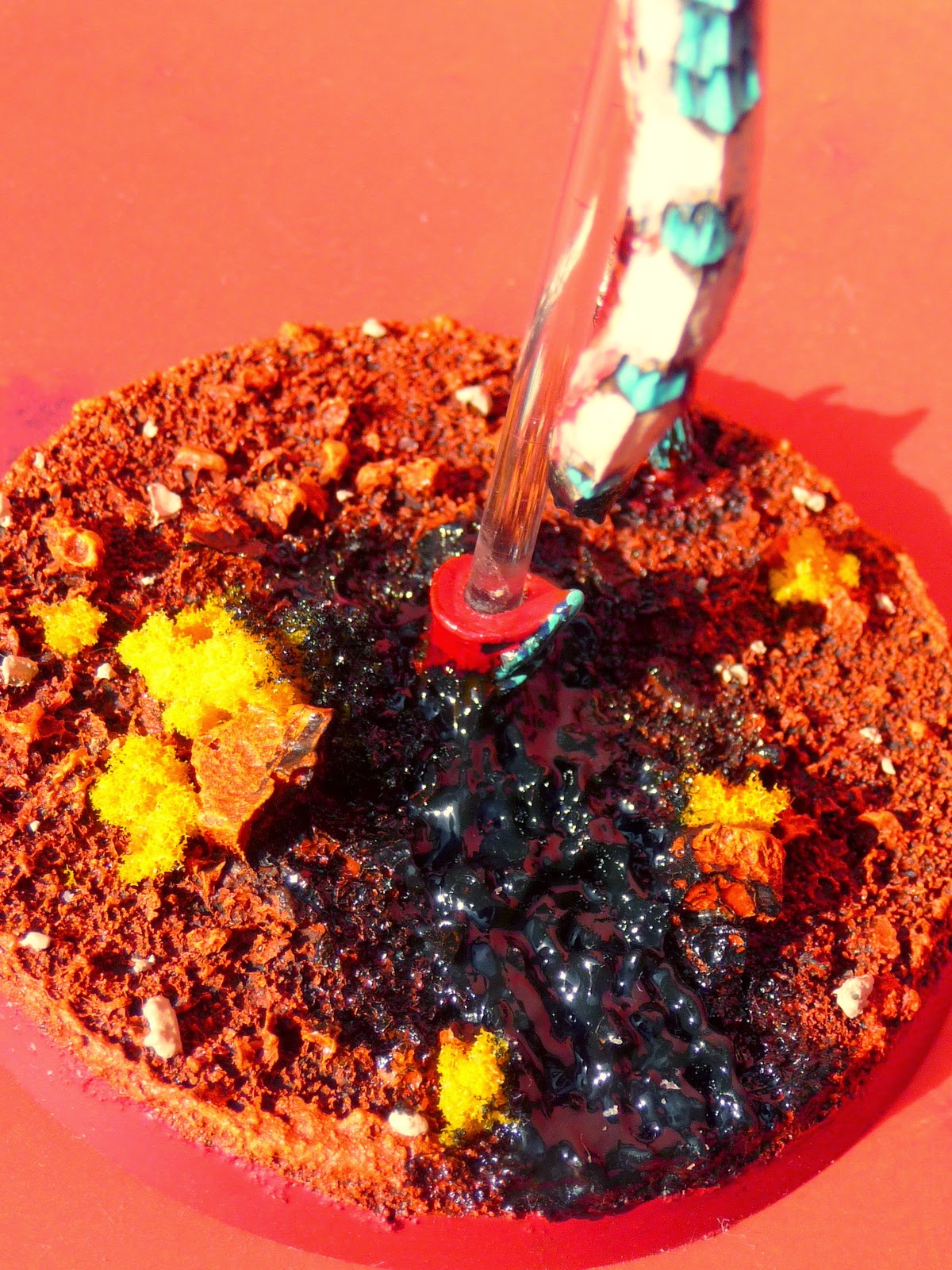 So, here's the Red Stamp of Approval! Another model NOT on my To Do List but once again it's nice to have completed something when things have been actually quite hard, hobby-wise. Now lets look at those Dark Angels again!