Mojo is beginning to flow now, I'm actually pushing myself to do bits that I know are tedious. I know that once they're complete it will be a clear route to progress that will actually be worth looking at for you, the avid viewer. 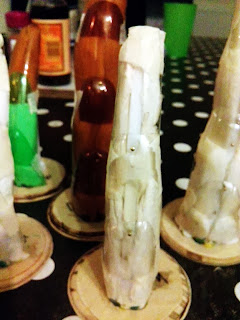 This update is just padding - literally. I needed to pad out the insides of the Chitin plates. I suppose I could have just used clay but that would have made the towers heavier, would have taken longer to dry and cost a bit more. I used strips of damp tissue paper and a judicious coating of PVA. This was layered and squished until I'd filled out the cavity behind the pop bottle plastic and the foam spine. 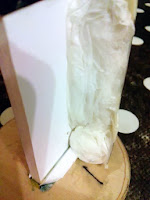 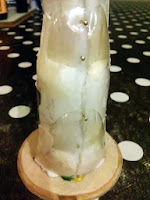 The PVA still took a few days to dry properly. Alternatively you could use tin foil and hot melt-glue but having experienced the hot melt glue melting the pop bottle plastic last time I wasn't about to see my chitin plates melt. 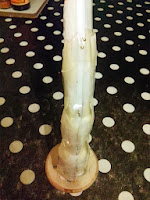 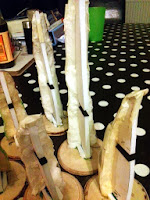 An alternative solution would be some other type of all purpose adhesive but I'm comfortable with tissue paper and PVA, it's cheap and does the job 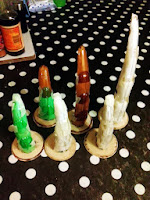 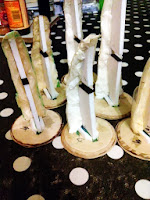 The next step will be to add some form of spikes down the inside of the spine. In the Bastion I used Spinefists to match up [a bit] with the old Forgeworld Capillary Towers but this time I wanted to use freely available bits [and I was also short of Spinefists]. I'd been thinking of what plastic spikes I could use, cocktail sticks immediately sprang to mind and then the wife was re-hanging some curtains and she had a bag of curtain hooks - 30 for about 60p - perfect. 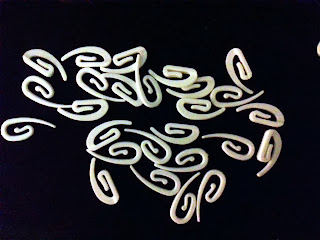 Each hook was cut down to a spike [save the bits you never know what they may be useful for]. 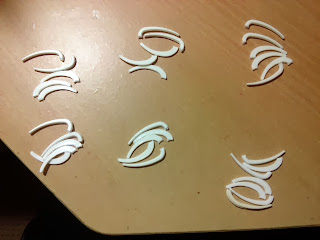 I masking taped the spine edge and inserted the first spine 30mm up from the base and every other spine 20mm thereafter [or near enough]. There's going to be a crater on the base so you need that extra 10mm on the first spine. Each was then PVA'd, it doesn't have to be super secure as further sculpting materials will be added so make them stronger. 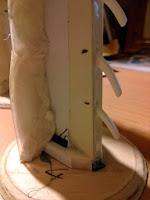 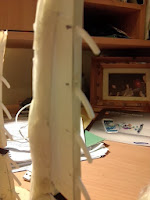 And there's 3 of them ready to start the icing - next up will be tile adhesive and grout. 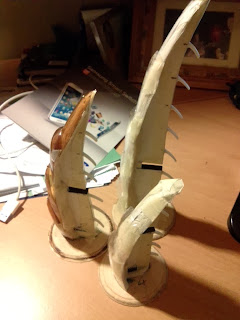 Once again this whole process is based on the process of construction for the Bastion. There's nothing new here technique-wise but it is useful to reacquaint myself with the skills and process. I've got another rough estimate of how much time this all took. Unfortunately the numbers aren't to hand but I'll update them later.

We're on 5 hours so far, the PVA padding took a further hour and a half and the talon spikes were just another 20 minutes. So we're around 6 hours 50, give or take.