PeteB went and pickedup the bargain set of Space Marine 1st Edition about a month ago now. Following his 'epic' purchase we decided to have a battle. I thought I had more pictures but it seems I didn't take as many as I first thought. Really we were just struggling to come to terms with the rules as I also had the 2nd edition rule set and Pete had the current Epic Armageddon ones. Having looked at the new rules one thing jumped out at me - the fact you have to roll off to see if your unit actually follows through on it's orders [am I wrong in this?] I hate that dynamic so we went with 2nd edition and mixed in some of the stuff we liked from 1st.

I got to roll out some of my old Ultramarines and PeteB had his force of traitors ;). I really need the 2nd Edition Warlord Titan datasheet, so if anyone has it or a link to it I'd appreciate it. Instead we used the Adeptus Titanicus rules that make it incredibly difficult to kill with non-titan units. Anyway, this was our set up at the beginning of the game, we put down orders and PeteB won the initiative and moved first. 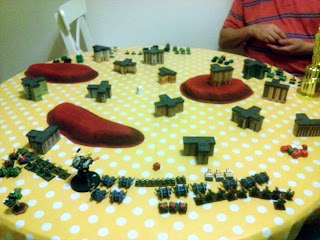 And we suddenly realised that putting everything on Charge orders was quite an issue as some of our faster units - bikes, speeders etc. were suddenly on the other side of the board. 2nd edition rules I think stated you couldn't fire either, compared with 1st edition where it was at a -1 modifier. Therefore I tried to position to capitalise on the next turn, making sure I'd got everything in place to rain fire down on the traitorous scum. 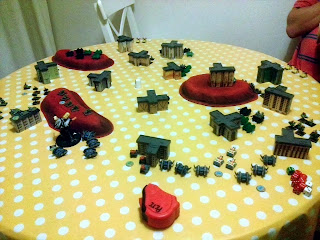 I did manage to get into assault with his Dreadnoughts though [robot proxies] and killed a few. 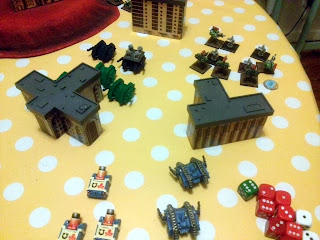 My Dark Angel allies - Ravenwing and Land Raiders, together with my Ultramarine Predators and Dreadnoughts tried to outflank the Land Raiders on the hill. 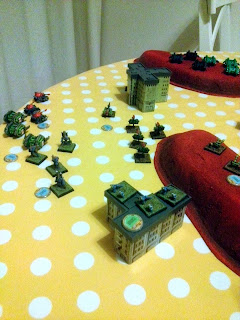 My Tarantula battery set up on the hill but I'd bigged them up too much before the game and the next turn they were assaulted and wiped out. My Titan spent most of the game untouched, firing with impunity but not doing a whole lot of damage. 2nd edition doesn't state you get +1 to hit on First fire orders, it's only advantage being you 'fire first'! Given most to hit rolls are on 5+ I'm not sure we liked this. When only a third of your hits do anything it can be a pretty unrewarding experience. 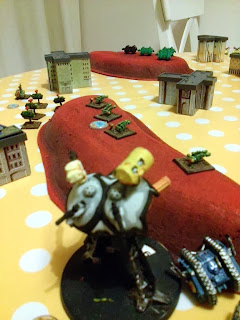 Sadly this is the last pic and so much happened after this. I tried to blow up buildings but again 2nd edition works by only barrage being able to damage them. My Thunderhawk came on, managed to do practically nothing and then put itself in a position in PeteB's deployment zone where it was just riddled with fire and shot out of the sky. Pete also created a Land Raider sandwich attack - my four Land Raiders in the centre of the board [three by the time this event took place] were assaulted by 2 units of three Rhinos with a higher Close Assault Factor the Raiders easily dispatched the first Rhino but the second Rhino gets an additional d6 as a secondary attacker and he was able to ram the Raiders into oblivion. 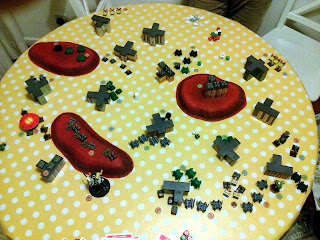 Once again it was getting late and we called it a night. I'm not even sure who won, we didn't even bother to work up which units had broken [and therefore we gain their VPs] and to be honest I didn't care. This was a game full of fun, attack and counter attack, periods were nothing seemed to happen and then suddenly entire units were vaporised. The great thing was there was no emotional attachment to the forces, these aren't my nids I've been using for years so it didn't matter if I won or lost it was the 'cinematic' journey along the way.

We had a 40k battle the next time we met up, as that was in preparation for Blog Wars but I look forward to our next Epic confrontation. We still need to iron out some of the rules we want to play with, being happy with a system that works for us. I think if we have the correct edition datasheets for Warlords, Reavers and Warhounds that would help too. I was devastated with their rules in 2nd edition, they became so much easier to kill but if we play them like Adeptus Titanicus rules they're overpowered so that has to change.

Following on from my battle I wanted to paint up a Reaver Titan for PeteB to use in battles. I wanted to do a red one with all brass fittings [very Khorne] I started with a Red Oxide primer and then blacked in all the metal areas. 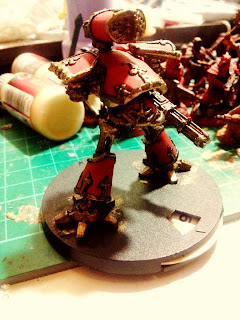 Shoulder pads, missile launcher, and head are all pinned to be secure. I've tried to do a similar metal effect as on my drop pod [do you remember that? G.O.D. that's so long ago now and still so unfinished!] Anyway, I'll add some more highlights and then probably a 'devlan mud' wash and then work on the red bits. I can't decide to go basic highlights on the red or try and do a mottled blotchy pattern of highlights... 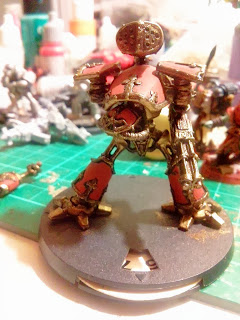