With a high percentage of nid players, 6 out of 34, it was no surprise for me to face at least one and probably no surprise to face a second. Phil Waghorn from Armoured Sentinel brought a slightly more original list than almost everyone else. Foot slogging Hive Tyrants and Dakka-fexes, only one Tervigon and a Mawloc and a couple of Hive Guard.


The low down:
My objective is with the Biovores in the wood, the 'Relic' objective is in the centre of the board just the other side of the Bastion. 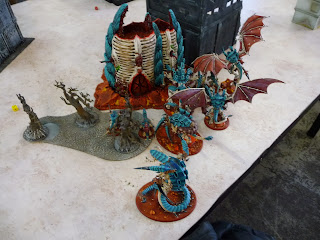 I set up this time with both Flyrants on the board with plenty of decent LoS blocking terrain. 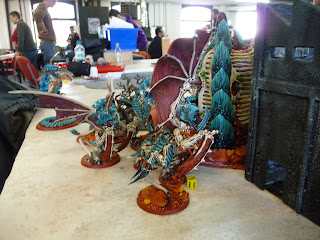 Hive Tyrant with Stranglethorn Cannon! Phil would come to regret taking that choice a number of times. 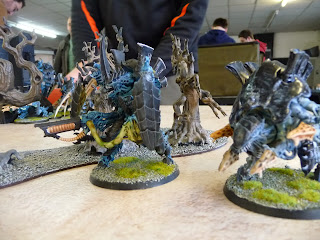 Phil had only the one Tervigon but two Dakkafexes and Hive Tyrants with Armored shell - 2+ saves! 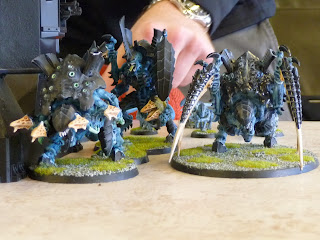 Phil's Tervigon was a 'proto-Tervigon' kitbash from a Carnifex like my own vanilla Tervigon. He'd gone down the green stuff egg sac route compared to my own foil balls and PVA'd tissue paper. 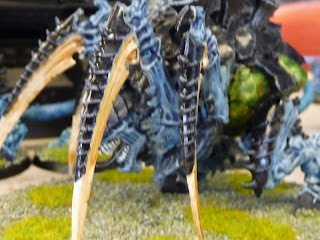 If I'm honest I'm not entirely sure what's gone on here. This must be Phil's turn 2 where the Mawloc arrived and killed a bunch of my spawned gaunts who had captured the Relic objective. The Tervigon behind had used Gate of Infinity in it's first turn but had deviated 11" back the way it had come from, much to our amusement. He still got a good 12" away from starting position and I think we decided it could still spawn gaunts on arrival. A contentious point maybe but we're both nid players so why not? Anyway I think that's why my Flyrant is in that position having swooped over the Bastion and shot the Termagants that were later replaced by the burrowing Mawloc 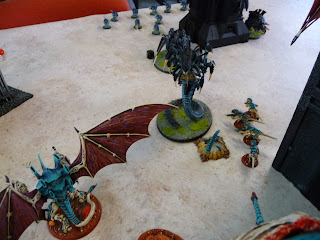 My turn 2 looks like everything came on. The Dakkafex has taken a wound, either thanks to the Mawloc of the Devgaunts. The Doom also gets into range of four units. I do recall at some point Phil's Hive Guard rolled to hit and got two 1's but with Old Adversary they got to re-roll 1's and promptly got two 1's! 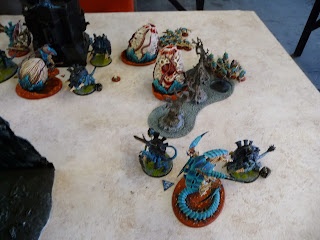 My Warlord Flyrant manages to vector strike one of the Hive Guard and shoots up the Devgaunts, my other Flyrant vector strikes the Dakkafex and even with Endurance it's down to just one wound, probably thanks to the Doom too. Meanwhile I bundle as many gaunts as I can onto the Mawloc 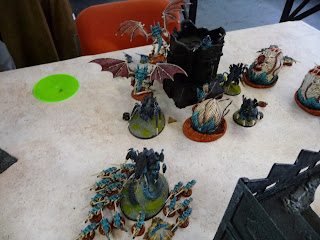 They swam all over the beast, not sure if they do any damage but it might have done. 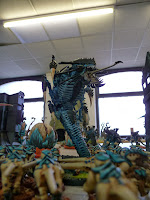 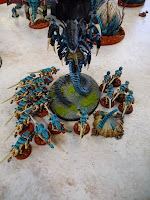 My own Mawlocgets into combat with the other Dakkafex who is also reduced to 1 wound. 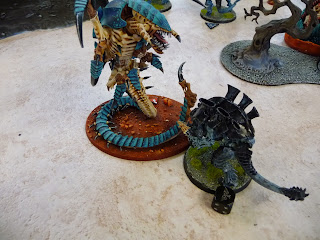 As my Warlord Flyrant is no longer in the picture I can only assume he succumbed to Devourer fire from the Devgaunts and Dakkatyrant. The Hive Guard comes down from his cover to escape the Doom who is reduced to 2 wounds. 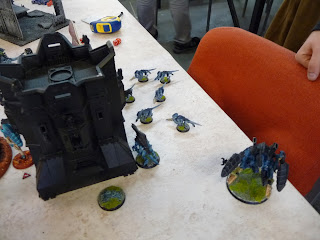 My gaunts and the Mawloc are locked in combat, although he doesn't appear in any further pictures. I think it may have died, just too many gaunts swarming over it and Phil's rolling was comically bad. 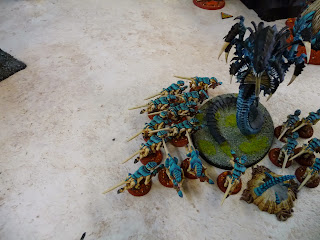 My Flyrant jumped into combat with the Dakka-tyrant but not before I stripped a wound off it and another wound from the Devgaunts. In retaliation the Dakkatyrant managed a wound on me in overwatch. I had 3 wounds left to Phil's 2. They flailed at each other an both ended up on 1 wound, lets face it these two behemoth's were just going to trash each other to death. 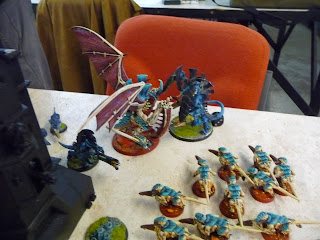 Deathleaper had been ineffectively popping up like Fenella the Kettle Witch throughout the game and it now had the chance to win it. Phil had managed to clear a brood of just four gaunts from my wall of flesh protecting the Relic objective. Deathleaper appeared in the ruins beside it and had to run to contest, anything but a 1... yep it was not meant to be. 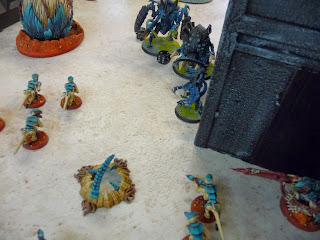 As expected the Tyrants killed each other in a massive display of monstrous stag like posturing. I think the Hive Guard may well have been killed too, probably the Doom what with the Hive Tyrant no longer able to provide Leadership. Thus I eventually secured the objective which gave me all 3 - 25 VPs and I think I had all 3 secondary objectives. Sadly, Phil only had Slay the Warlord and I think linebreaker for 2VPs 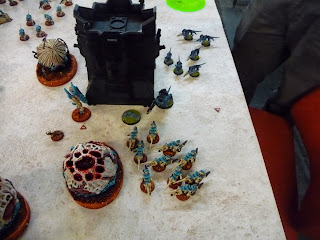 In fairness Phil came with a pretty non-standard tournament list, a huge amount of dakka [and when I'd seen the list beforehand online I had sweated on what to do if we were matched up] but not as mobile as my force. He was also beset by some atrocious dice rolls, usually at he most crucial points in the game. I was laughing hysterically at some points, I hope that didn't come across as poor sportsmanlike but they were so typically bad at just the wrong moment you couldn't help but laugh. Like I said this was a pure joy to play, I hope it was on the other side of the fence for Phil. The scoreline doesn't do the game justice, it seemed like a completely one sided affair, it wasn't it was just a last minute objective steal and secure on my part. I'm not sure if Phil could have recovered if there'd been another turn, what with the Doom still prowling his back field, but he did as well as he could with the dice rolls provided.