ebay sales I shouldn't regret, but kind of feel like I do

I'd been watching a couple of 'buy it now' auctions from the same seller for a few days on ebay. What really struck me was the Space Hulk Genestealers on offer. Sure they weren't the coolest choices out of those that came with the box but even standard stealers usually cost more than £5.50 for six! You can't even pick up five Termagants for less than £6 at GW so this, I felt, was a bargain. 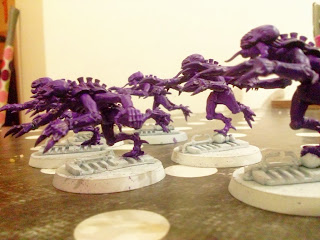 So, when it came to pay day and they were still there I decided to snap them up. Indeed the bargain was even better as they're on 40mm bases to account for the Space Hulk metalwork they're mounted on. A set of five 40mm bases is £3, so I got £3.60 worth of bases. All I had to do was split them off the base, trim the mount down a bit and re-base them on 25mm bases. One stealer did snap at the ankle so I might just have him as a Ymgarl and cut him further down and have him emerging from dormancy. I'll also need to mix them up with more bits too, but still a bargain. 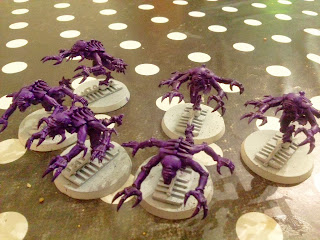 However, it didn't end there, as they also had a Warrior and 4 Termagants for £3.99. Again, taking into account five gaunts are £6 another bargain. he's even got the Deathspitter and both have their Rippers intact so I should be able to make another base with the couple I have knocking around. The other bonus, I have five spare 40mm bases to mount him on! I'm sure at this point you're wandering why I need more Tyranids when I said I wasn't going to buy any. Well with a new Codex coming out who knows what I might need but additionally I have started something I will refer to as Project X. It's a small expansion of my Tyranid force for a very specific reason. The current amount of figures I have was not going to be sufficient so if I can pick some up cheap I'll do it. Project X will feature here and there over the next 12 months, I just need to stock up on bits in case they're needed. 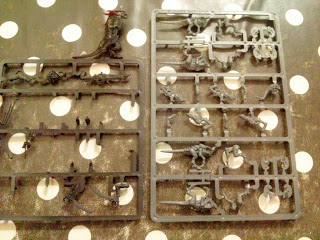 But I can't go Tyranid without some bits for my Dark Angels and £2.49 got me these Scout bitz. That's 5 scopes on those bolt pistols that I can graft onto my rather plain Dark Vengeance and Battle for Macragge Tactical Marines. There's also two Bolter straps, plenty of grenades and other equipment and not to mention a Heavy Bolter I can add to my Land Speeder that is missing one. 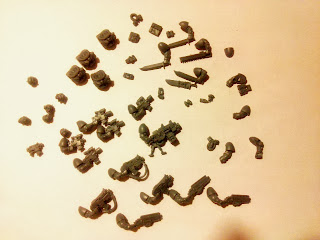 Add on the £4 postage and £15 is quite a good price in my book, except I then went and missed out on two more Macragge sets for £15 and £16, one was missing the scenery but did have a box of Tyranid Warriors and the other had a bunch of Eldar jetbikes. So you see it was a bargain but I kind of regret the other missed bargains too... Still we'll work with what we've got.
Posted by 40kaddict at 12:18