I should be hip deep in gaming right about now, hopefully my back will be able to take another day leaning over the table. Anyway it's Blog Wars 6 today, I'll be there with my son and PeteB and his son. PeteB didn't think he'd manage a complete list in time so wasn't able to enter but he's there to soak up the ambience and have some quality time with his son. I on the other hand am forcing mine to engage with something other than digital content, although not so successfully as he'll no doubt be taking a Nintendo DS and probably his iPad. Still the two boys get on well and they're taking some board games too, so there's hope.

Anyway, I nipped round to PeteB's the other night for a practice game, I've another Space Marine report to write up and I wasn't fussed about 'prepping' per se but we haven't played a big 1850pt battle and he'd just painted his boards red to go with my terrain so why not? Anyway, we tried to play the game to the 2.5 hour time limit and eventually I realised taking pics wasn't going to help with that so this is no battle report because I stop after the top of turn 2 [coincidentally when the ship hits the fan ;) ], which is a shame as the game was a doozy. I'll do a bit of a lead in though but it makes me realise the upcoming reports may be thin and lacking in pics. The last thing I need is not to finish a game because I was taking pics.

Anyway we played one of the scenarios - Emperor's Relic/Vanguard Strike - three objectives, one each at 5VPs and a 10VP objective in the centre of the board - like the Relic but you don't have to pick it up. After the last game against PeteB's eldar I was a bit worried and then to see two Wraith Lords, a Wraith Knight, Wrath Guard and an Avatar, this was scary stuff. 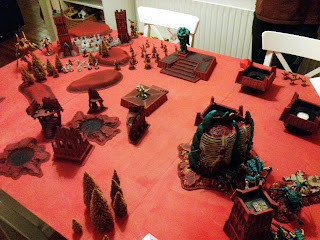 Thankfully I had a lot of terrain to hide behind and pretty much all the psychic powers I needed to get the job done. 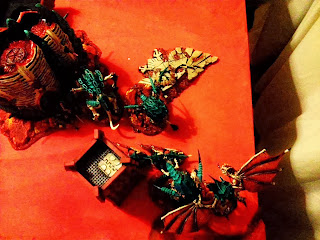 PeteB had first turn but I'd made it difficult for him to get any shooting in so he advanced. 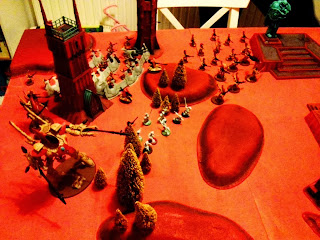 I spawned out on the CC Tervigon, it's gaunts getting round the Bastion and running into the outpost in front.  I also spawned a dozen or so with the plain Tervigon to secure my objective. 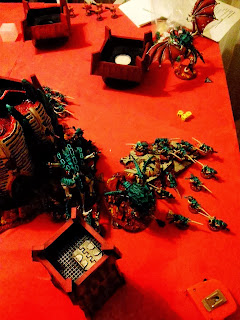 My gaunts nice and secure in their outpost. 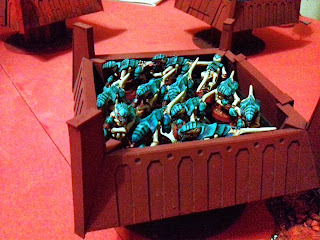 PeteB headed further into the centre and secured the Tau objective marker. 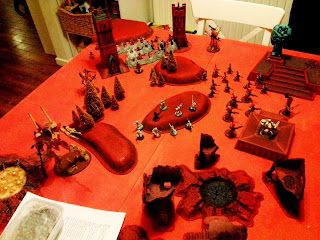 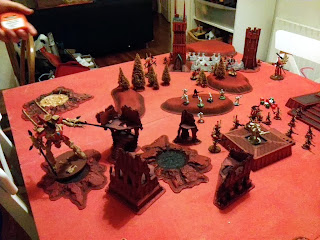 And so with one shot with his Distortion weapon insta-killed my plain [still spawning] Tervigon. I failed the FnP [which I later found out you don't get with insta-kill] and failed my 5+ cover save and he was ripped apart 6 wounds and all! I thought this was going to go so bad from there. 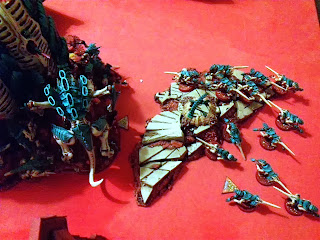 What followed was quiet a battle though. I stopped taking pics and then all my reserves arrived. The Doom was taken down to 2 wounds through the Quad Guns interceptor but sucked the life from four units and PeteB's Leadership rolls were appalling, although his invul saves weren't too bad to mitigate the problem. My Spore pod bomb worked super effective and I was able to take out quite a lot, probably doing more damage than PeteB had done in his turn.

In retaliation the Doom was targeted and his one save failed leading him to be insta-killed on 10 wounds! Eventually the Avatar was killed but my Devgaunts behind the Eldar Defence line were slaughtered. The Wraithknight was also destroyed, with I think 3 turns of assault from one of my Flyrants. Eventually the game hinged on a Wraithlord with 1 wound contesting the central objective. Warp Spiders contesting my objective [with no way to shift them in the time remaining] and my Warlord Flyrant just alongside the Matt Black Honored Imperium statute. I swooped him across the board to kill the Guardians behind the Defence Line, tried to kill them but they went to ground and only two died, saving their objective. I tried to kill the Wraithlord with my two remaining Hive Guard and they failed. The game was lost, PeteB had won

As soon as the Flyrant had fired I'd realised my fatal mistake, I'd chosen the wrong target - a 24" swoop to engage fortified Guardians or a 12" jump to engage the Wraithlord. Realising the error we played out what would have happened, the Flyrant would have shot and it wounded just once [one 6 out 11 dice? I'd already had that off 14 and 15, my rolling was well below the odds in some circumstances] but he failed the save and would have died, even so I could have got into assault and would have most likely died, leaving my dev and spawned gaunts to capture the objective.

I have to say, even though I lost, I was amazed how close I came and if only I'd made the right call [thanks pressure] I could have stolen it. Ultimately it did put some faith back into my list. I was terrified at what the Eldar could do from our last game [I mean Dark Eldar fear] and I saw some new tricks that didn't make me any happier but I still think I've got a list than can perform even when something goes drastically wrong. Ultimately I need to be playing quick and decisive and having fun so lets hope that's what's happening right now. With mainly Space Wolves, Eldar and Nids I can look forward to the sort of things PeteB has plus Wave Serpents, or Long Fangs and their Priests opening up cracks in the earth :( or face my own medicine against the Doom - which is always am interesting challenge on who knows how to play the codex better. Or, it could be none of the above, I'll let you know.