Leo was my final match and unlike current Throne of Skulls this was a tournament where you were paired alongside someone who had been equally successful. So Leo had won both his games up until this point and as we started I could tell he wanted to win much more than I did. But it was my second time against Tau and there was some interesting cover to hide from his gunline. I elected to outflank the Tervigon to capture an objective and deep strike the spare Flyrant for more giggles.

Leo picked me up on my Psychic Power rolling, I usually do both at once but you're supposed to do one and then choose whether to swap for Primaris so you don't get to keep a better roll. Although, I've never actually used the Primaris when I've swapped and I do it all at once to save time not gain an advantage so it's down to what's more important. I'll keep a Haemorrhage on low Toughness opponents, otherwise I'll swap for Smite[and that's only since playing alongside Dan at Battle Brothers]. I don't swap any other powers for Primaris so I'm not sure it makes any difference on Biomancy but he had a point, it is the rules, so maybe that's an important lesson to learn.

I tried to keep everything hidden. 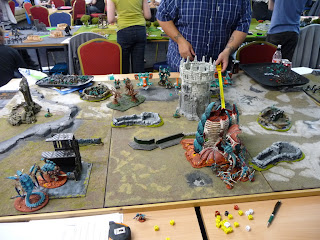 But with Tau, even the most distant item can usually be targeted by something. 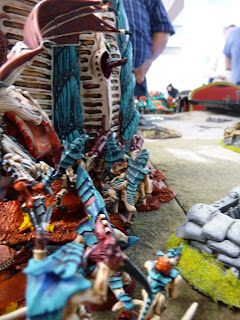 As you can see I had quite an array of firepower set against me. I know there's Fire Warriors in that left Devilfish. 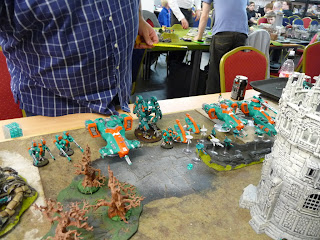 I'm not even sure what half of that stuff is but there's another unit of Fire Warriors in the right Devilfish. There's also an Eldar Autarch on a Jetbike behind the Tau at the back, with two squads of 3 Jetbikes in reserve and two units of Kroot outflanking. 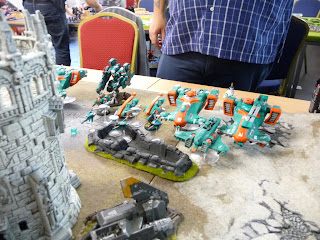 Leo, took great exception to my Mawloc and as it was the most exposed gribbly on the board it took 4 wounds in turn one! Still, my more valuable units were saved thanks to this and it was not going to be there next turn anyway ;) 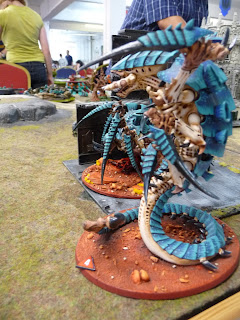 Everything else moved forwards. 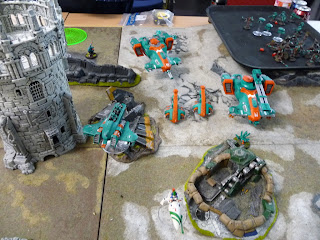 I think at this point I was humming the theme tune to Pacific Rim as the Riptide [Jaeger] headed for my Tervigon [Kaiju]. Anyway, the Fire Warriors managed to get the first Relic, although I did surprise Leo by pointing out they could in fact get back into their transport next turn and skim off, he'd been under the impression you couldn't take the Relic on board transports. At this point I was getting really tired and was half a mind just to say to Leo I wasn't in it to win, just wanted a good game and just sit back and let him roll over me, hence suggesting how he could win, but I thought that would be the wrong thing to do. 'Conceding' the game would have been a disservice to the other people who would have wanted my place on table 2 so I knuckled down and carried on. 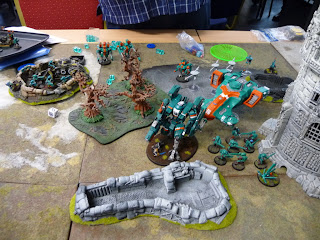 My plain Tervigon spawned the magic 15 and they headed for my left Relic. 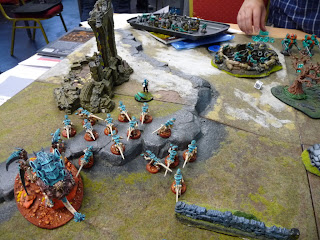 Biovores took shelter in the Bastion, but also so they were in range of more fish heads. 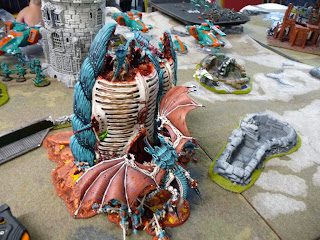 8 of my gaunts got vaporised. I think the Riptide took a dislike to them. 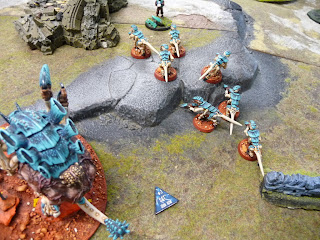 But they succeeded in capturing the Relic. Everything came on in turn 2 but I managed to deviate the Mawloc from smacking a Devilfish, Tetra and Hammerhead and instead caught the back of the Devilfish causing a hull point and killing 7 of my newly arrived Devgaunts! 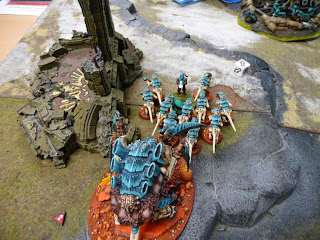 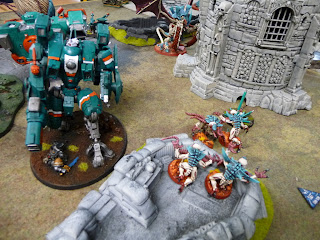 My Flyrant had been pretty poor with his shooting, I think I split targets instead of going in for the kill. The Devilfish has taken 2 hull points but now the Flyrant is a swooping duck and meanwhile the second unit of Fire Warriors have secured the far right Relic but I have my Devgaunts behind them and my CC Tervigon has outflanked handily on the right side just out of shot. The Mawloc looks to have been shot down too, given it's no longer towering over the twisted bodies of my own Devgaunts! 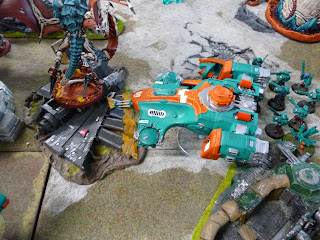 My gaunts are all killed thanks to Markerlights as my Tervigon was +3 Iron Armed and nothing much could harm it with 4 wounds left. A squad of Kroot outflanked next to it. 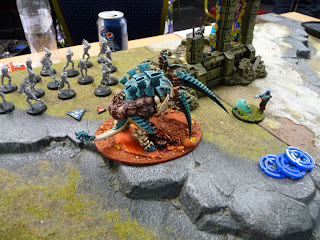 The Doom had come on, sucked the life from all but one of the sniper drones and wounded the Tau commander as well as a Battlesuit but he was instakilled by some plasma weapon - two saves he was forced to make this game! The space marine bikes are the Eldar Jet Bike proxies finally arrived in turn 3 [or 4]. 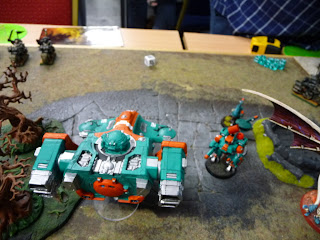 My Flyrant takes another wound but I think he went on to kill the Tau Commander gaining me Slay the Warlord. 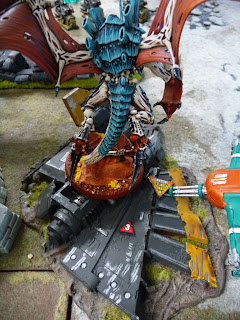 And that's the last of the pictures but obviously not of the game. By this time were running short of time. I was being pressed to speed things up but it was hampered by the fact one of the guys on the table to my left had decided to sit down in a chair in the gap between the two tables. At first I could get round to Leo's side but then he moved further back an I was having to run round my table and back along Leo's side to get to my Tervigon in the far right corner. When you're having to do a 9-10m jog every time you want to move a figure that's going to impact how fast you can get stuff done, it also takes hit's toll physically.

Anyway, my Tervigon on the right managed to assault the big blob of Kroot that had outflanked over there. Meanwhile I'd spawned a lot of gaunts into the gap between the spore pod, Tervigon, Kroot and Fire Warriors. Leo was justifiably strict on whether they could fit in the space and still give 1" gaps to his units because I was then able to assault the Fire Warriors holding that flanks objective. Eldar Jetbikes would later join the melee and as the game closed I had one Devgaunt left in the assault and with dice down we never made the pile in move.

In the centre of the board I'd managed to surround the middle Relic but not pick it up. At least he wouldn't be able to pick it up. On the left flank my Tervigon spawned out on 3! but those Termagants managed to hold the Kroot while the Tervigon picked up the Relic, we each had secured one. But streaming forwards came the other Eldar jetbikes to end the game right next to the objective. And with dice down I had one relic worth 6pts and Slay the Warlord 1pt for 7pts versus Leo's 6pt Relic. No one had managed Linebreaker.

However, a rules debate about 'contesting' the Relic sprung up, given the Eldar Jetbikes were in physical contact with the one being held by my Tervigon. I surmised if it was the case you could contest the Relic, and it does not say you can in the rules, my lone Termagant was also contesting the Fire Warriors Relic, but it was pointed out they weren't within 3", given we'd not piled in after the combat. We ended up with both Event Organisers forced to make a ruling which ended in my favour, although again halfway through the debate I was all for 'I'm really not that bothered about winning anyway' and if I hadn't believed I was right in that you cannot contest the relic, I mean it's that difficult to pick the damn thing up in the first place, if you can wrest those VPs back from just being near it no wonder everyone groans at Warhammer World when that mission is called. But the result was called and totting up FOC charts I'd suffered 590pts of damage, due to my Spore Pods still in existence and my Tyrants hanging in there for the whole game.

This was a tough game, it was by no means unpleasant it was just unfortunate that having to trek to make my move every turn made things more drawn out and perhaps look like I was stalling. I was playing as fast as I could, which Leo did acknowledge at the end, but sometimes my haste bred mistakes, I nearly ran my Devgaunts with 4 shots each one turn!

Part of me still wishes I'd conceded, even with £20 of credit and a trophy because I wanted a fun game, I always do. I hope to go back for more tournaments and likely play some of the same opponents but some people are competitive and that is the nature of the game afterall. I'm not sure handing it to them on a plate would do anything for their sense of achievement. I think I need to work better under pressure and that's what I was forced to do. I refused to concede, I handled the rule lawyering when necessary and where usually I would be loose with certain rules Leo's competitive edge forced me to be on top of my game. So, although this is not the sort of game I would look forward to playing often, it is certainly one that pushed me both to my limits physically and tactically and it's only through those experiences that I can improve as a gamer.