Joel was next up with his Chaos force led by Huron Blackheart. Plenty of Rhinos for 39 Marines and a Vindicator, with a Heldrake and Maulerfiend alongside 6 Warp Talons.

I decided to keep the Tervigon and spare Flyrant on the board this time. I wanted to stall that Maulerfiend with a Termagant tarpit and pull back but I greatly underestimated the speed of the Rhinos and Huron's ability to Infiltrate D3 units had them at my door well be fore I expected. 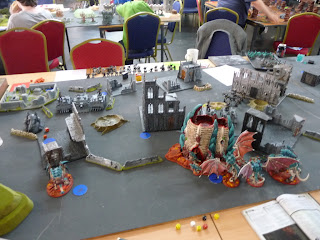 At the end of his first turn everything was well forwards but he'd not been able to target much on this side. 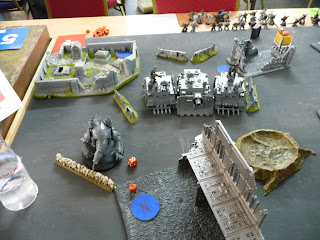 Meanwhile in my 'base' either the Hive Guard or the Biovores suffered a wound, alongside some Termagants. 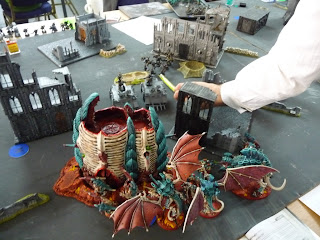 I was able to blow up a Rhino in the centre, may have immobilised the other one top right through rear armour shooting. Tervigon spawned out on 10. 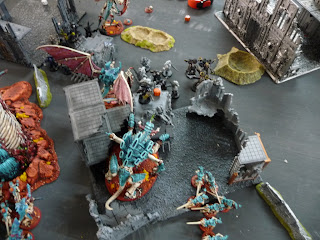 Biovores were poor shots and aimed too far away. 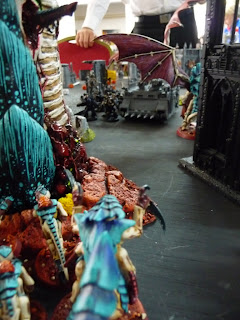 Warp Talons got in on the action and my spare Flyrant was engaged in combat. 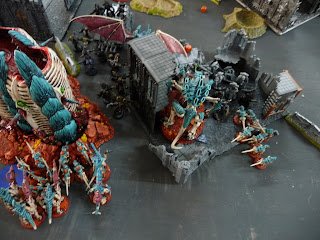 Vanilla Tervigon had spawned out on 9 and having drawn the Maulerfiend forwards [like it was going anywhere else?] moved back to my base with the Termagants as the delaying meat shield. Somehow the Rhino/Vindicator sandwich did not take out the Tervigon. 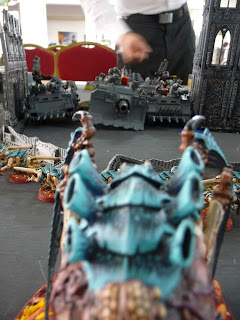 My spare Flyrant was on one wound but he'd taken out Huron. You can just see the Doom in the background. He'd deviated quite far away from the action but he would later move around, sucking life and being a pain. 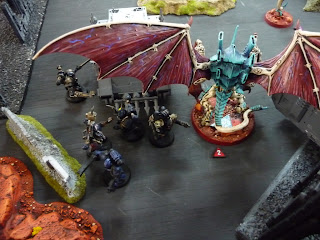 My Tervigon was being assaulted from both front and back but Warp Speed was allowing me to take great toll on the Talons and Marines, I think my spawned Termagants were roasted by flamers. I was not feeling confident considering I was losing my extra scoring units quite quickly. 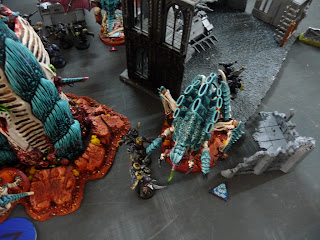 Everything turned up for my reserves. I blasted the Rhinos and Vindicator with the Mawloc, taking out it's Cannon with a penetrating hit. Devgaunts tried to glance a Rhino and my Flyrant banked left to take out the other Rhino. His Heldrake came on  and with my vanilla Tervigon assaulting the tarpitted Maulerfiend the Heldrake proceeded to roast the gaunts I'd put on the battlements of the Bastion. 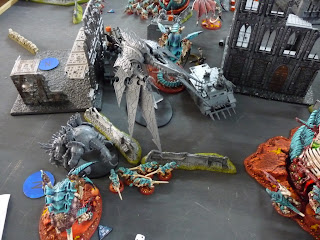 The gaunts were reduced down to 2 from the Heldrake. Those two would later leave the Bastion and capture the objective underneath the wrecked Rhino on the right. 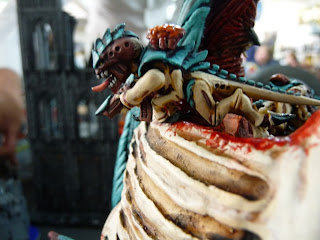 I think the Mawloc was killed at this point but most of these vehicle were now immobilised or wrecked, hence the foot slogging Marines. 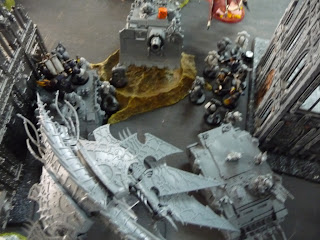 My Ymgarls had woken up in his back field, in the ruins top left out of shot but managed to reach the marines. The Chaos Marines multi-assaulted the Devgaunts and my Spore Pod which killed two marines! 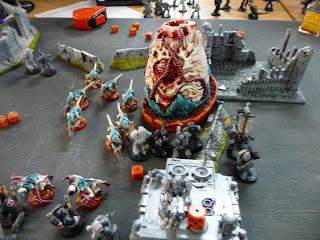 Only to be wiped out alongside the gaunts - once again my scoring unit is wiped out as I hold an objective only to lose it to Joel! 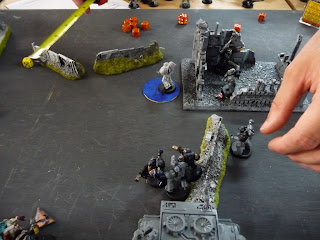 And yet somehow in the remaining turns, but with no visual documentation I was able to kill the Maulerfiend, with my Tervigon securing one of the objective on my left and my Termagants securing another. The Heldrake was laid low by my Hive Tyrant  and my other Hive Tyrant managed to oust the Marines from the ruins and Joel was thankful to be tabled as it made it easier for him to tot up how many points I'd destroyed.

It was then that I found out if I tabled someone I got his whole FOC points and all the objectives, regardless of if I had troops to gain them so I got the full 18 pts plus Lien Breaker and Slay the Warlord. Suddenly I'd leap frogged up the rankings. I don't know how the game turned around. The Doom survived and helped out I don't think it was one thing it was just too many tricks on my side that stopped Joel from focusing on one element and taking it piece by piece.