Armies on Parade board - The finished article [near enough]

The board is done, not that you can see much of it once I put all the figures on it. Unfortunately I wasn't able to fit the digestion pit on too but most of everything I'll be showing is on there or at least an indication of where they might go [Gargoyles in the background I'm looking at you]. 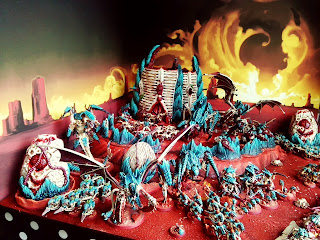 I've got the Ymgarls up front coming out of the smashed Aquila. They're some of the more recently painted nids and are quite varied in their mutations so I think it was appropriate them being the vanguard of the force. 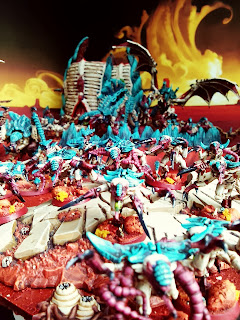 The second Flyrant will have his wings replaced with the Swarmlord's Bonesabres. The wings are a bit too big at the front distracting from what's behind but there was nowhere else to put him really. I even got my Rippers on the board on the right. The blades are black with Turquoise, I have to still photograph them in natural light. 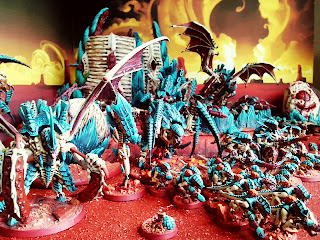 CC Tervigon is the 'mother hen' that is back at the hive [Bastion] which is surrounded by it's defensive walls [and Quad Gun ;) ] and it's aptly named 'Hive Guard' who are defending the Hive from anyone foolish enough to approach. I think this accurately depicts my belief that Tyranids are not just a roaming force that don't have structures or things to defend. When you see it like this it makes sense, sadly with so little Tyranid terrain and buildings you don't often see it like this, hence the misconceptions. 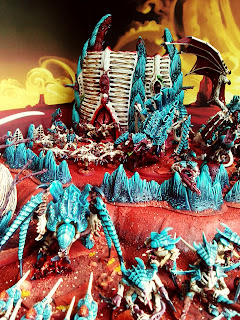 Even the Trygon had to take a back seat due to the amount of stuff on the board and when I display it for real I will probably add even more gaunts wherever I can fit them! The Biovore is hiding in the background too. 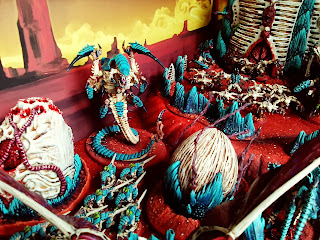 Hive Guard and Quad Gun defend the Hive. I was quite surprised how well the defence line managed to fit the hilltop that was cut at a completely random shape. I guess it's just very versatile. 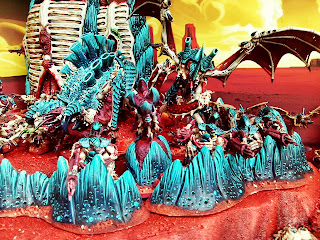 My rarely seen Gargoyles will be in the background. I dislike them so much I couldn't even be bothered to put more than 4 in these shots, just treating them as 'placeholders' for where I'll put them today. 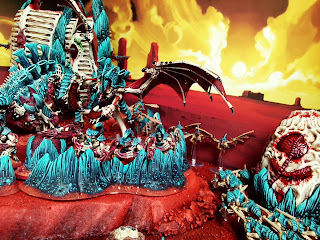 Lastly, plenty of node points will be scattered among the battlefield debris. 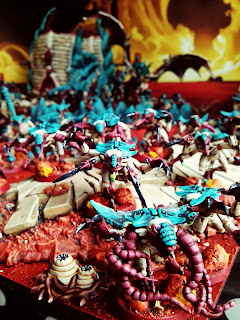 I'll be dragging all this stuff to Southport and it also happens to be day one of the Southport Airshow. The Red Arrows should be there [weather permitting] and indeed tomorrow there was supposed to be a fleeting visit by Avro Vulcan, no, not Avro Vulcan but the only remaining flying Avro Vulcan, unfortunately I've been told it's suffered a mechanical problem so will be unlikely to attend. Maybe the Free Radical Collective have go to it! However, it does mean Southport will be an absolute nightmare tomorrow for traffic/parking so hopefully I'll find a way to avoid all of that.

Meanwhile, having finished my board a few weeks back and coming down after the 'gluttony' of the Scythe and Teacup tournament my hobby Mojo is at an all time low. Even painting the Swarmlord's Bonesabres left me on some occasions unable to paint for more than 20-30 minutes at a stretch [bodes well for my Dark Angels!]. The situation has not been helped by a renewed interest in Dawn of War II and more recently Saints Row 3rd [I know IV  has just come out but 3rd is what I've got].

Not to mention my kids started back at school this week and I discovered now my eldest is in secondary school and has much further to walk he gets up 20-30 minutes after me and will be under my feet while I get my morning routine done. On the plus side it may force me to abandon my late night stupidity so I can get up on time and get my stuff done before the kids descend on me. And my 93 year old Aunt has also been in hospital this week which is emotionally and physically draining too.

Sadly this means my blog schedule is running dry which may force a short hiatus, but usually when I suggest that, my mojo returns and nothing changes. Although give me a glut of GW today and I may just keep feeling sated like an overfed snake for weeks again. However, even if a short break transpires there may well be something wonderful that will happen before then, it's Saturday though and it seems no one reads the blog on the weekend [according to my stats] so who knows if anyone will pick up the teaser tomorrow...