Given the extra points than I'm used to using I went with 2 Hive Tyrants and then gave my Warlord Hive Commander just to have some fun outflanking a Tervigon, that way I could have 6 things turning up on turn 2 [if he survived] - Mawloc, 5 Ymgarls, Doom, 10 Devgaunts in Pod, Tervigon and the 2nd Hive Tyrant. Lets see someone resolve that target priority.

I took less photographs than usual so hopefully it'll be quicker to do the reports sbut maybe more sketchy in what went on.

Will, was my opponent, he had plenty of Dark Eldar [which I forget their names] including 7 Venoms and 3 Ravagers with some Chaos allies of Obliterators, cultists and a Heldrake. I moved forwards cautiously, maybe stupidly. Tervigon spawned out on 9. 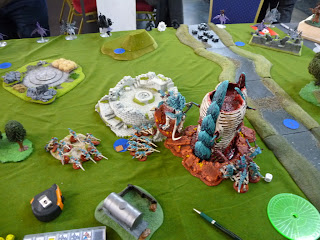 The flyrant was open to the Venoms and the Ravager on the right so I flew him towards the trees just out of shot. 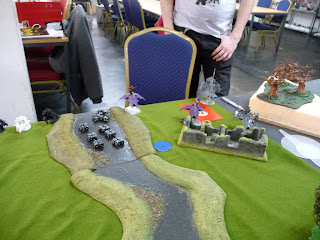 More Venoms than you can shake a stick at. Having been tabled last time I played Dark Eldar I felt slightly more confident in that my six turn 2 'beta strikers' should do some serious damage. 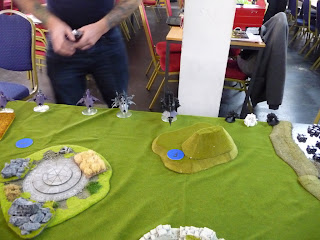 My Ymgarls were asleep in the shrine area, waiting for victims. 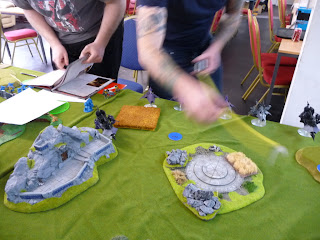 My Flyrant on the right flank. 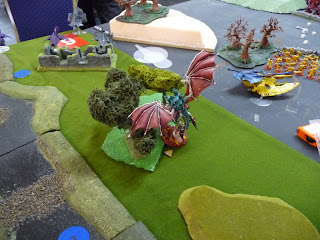 I think the Tervigon took a couple of wounds but most of Will's shooting was ineffective. Although I don't think that unit of gaunts in the crater survived as they don't appear in any further pictures. 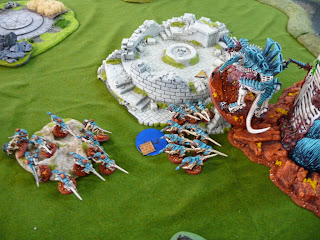 With my Warlord still alive I got my +1 to reserves, but the Ymgarls failed to turn up as did the Devgaunts in their pod! So much for beta strike. The Doom pod deviated but I got within range of the Oblits and sucked the 3 wounds out of them. The Flyrant managed to get a Hull Point on the Ravager, meh! 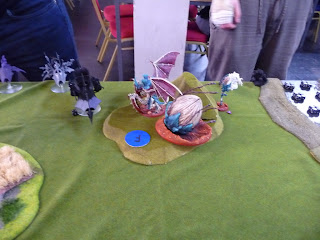 With only two wounds remaining I send the Tervigon forwards, it was either that our skulk back, which may have been the better option. 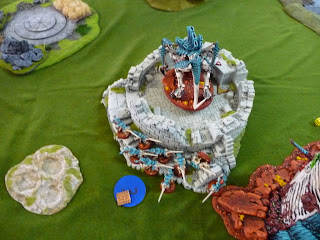 Hive Guard enter the Iceblood River, one takes a wound. 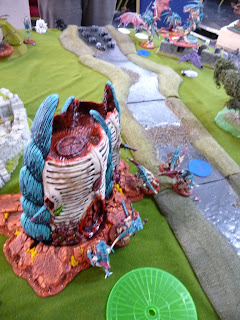 Flyrant manages a Hull point vector striking the Venom bu fails Devourers on something else. Mawloc misses and the outflanking Tervigon doesn't do much. My 'beta-strike' sucked the big one. 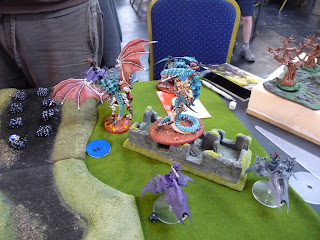 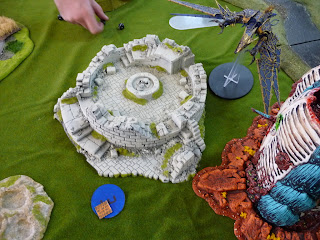 The Doom sucked another wound, I should have insisted the already wounded Oblit take it but didn't want to be an a$$ so he got two shots on the Doom and he was insta-killed - the price of kindness ;) 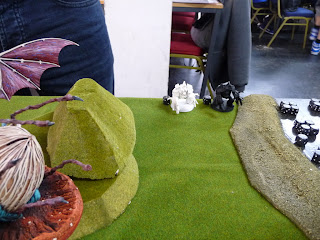 The Flyrants on 3 wounds bu manages to chase down the Heldrake and tears it a new one. It blows up and crashes backwards into the iceblood river where it can do no harm. The Mawloc just in view in the top right smashes the Venom, disgorging the Homunculus and his retinue. He would later kill him getting me Slay the Warlord. 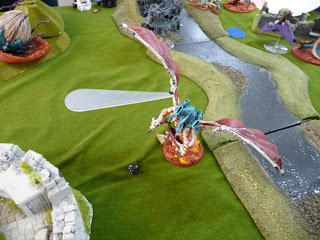 Having secured the Bastion with my Biovores Will manages to target it with Dark lances which blows the thing sky high, killing the Biovores and a nearby Hive Guard. 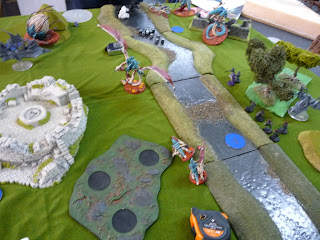 The second Flyrant [with 3 wounds remaining] Vector Strikes a venom with 4 hits, manages to wreck it and then with it's Brainleech worms pins the cultists. I later reposition him to contest the objective and Enfeeble the cultists so they will struggle to reclaim the objective. 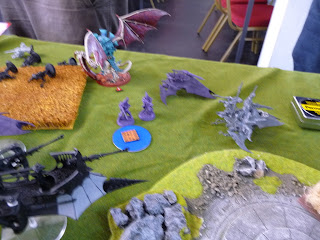 The Devgaunts arrive to hold my objective but are quickly removed from play by the Dark Eldar. 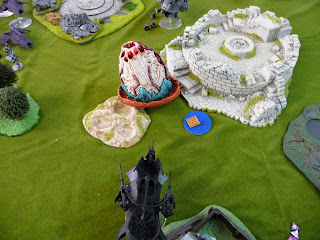 Warriors on the far side of the river target the last Hive Guard, wounding 5 times but his armour is impenetrable and does not lose his last wound. 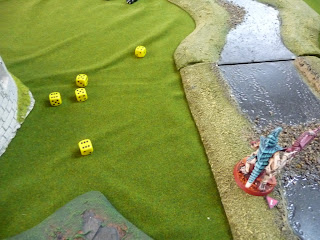 The game ends and somehow I've won 5 VPs to 4 VPs. I'm assuming the outflanking Tervigon captured an objective as I had Line Breaker and Slay the Warlord and Will had Line Breaker and 1 objective. However, there were victory points too for the units you killed, but to get them you had to kill a unit and it's transport. Just taking out one element was not enough. So although I had won my FOC points were quite low and Will, although losing, had made quite a few points, with 1130 points in tatters.

I have to admit I was physically drained after this game. It was such a close thing at the end. Splinter rifles are relentless, Will did say it was one of the most tactical games he'd played. It felt to me like game three on a Throne of Skulls not game 1 at a local tournie. I was shattered and still two games to go!