Having magnetised the Winged Hive Tyrant I thought I'd do the same to my metal Hive Tyrant. That way I can mix them up, have him with the Twinlinked Devourers, or as the Swarmlord or back with his normal Heavy Venom Cannon and Boneswords.. Of course the first thing to do was pull off the HVC and other weapons. This resulted in the HVC shoulder snapping but hopefully I can fix that. 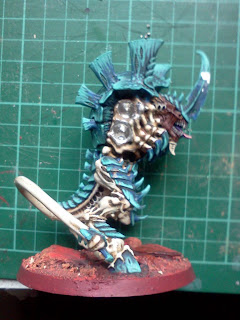 With some new drill bits I was able to chew through the pewter no worries, in fact if you can see in the bottom hole a slight darker horizontal curve, that's the abdominal ball joint attached to the torso. The rest of the miniature is looking quite dilapidated now, not from the conversion process, it's been unnecessarily in my figure box for months now and the crest got bent, fracturing the paint. And all the areas where weapons overlapped Chitin plates hadn't been painted either, I should be able to touch these up though. 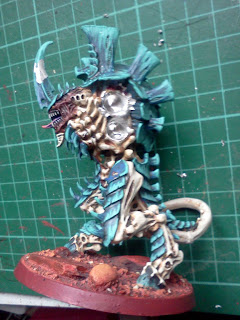 The magnets in situ and the slotted in perfectly. You will note I haven't angled them like the Winged Hive Tyrant as this will primarily be using other weaponry so if the Fleshborer/Devourers are used I'm not fussed so much if they 'bunch up'. 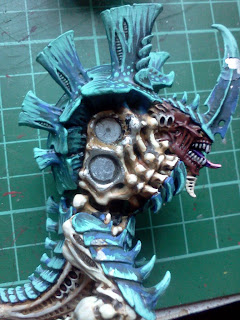 The other side, equally as sweet. 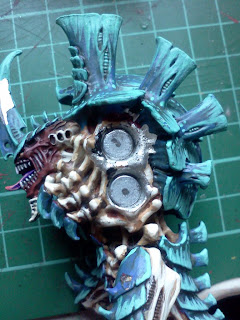 And look what happens when I try out the Wings and Fleshborers/Devourers! I have to say how impressed I am that they made the wings fit the existing model. It may seem obvious it fits but there was always the chance the plastic version was different given the different moulding process. 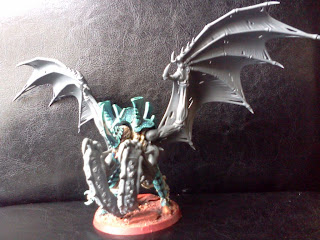 Indeed the flat magnets means the Fleshborers/Devourers do look quite bulky, certainly more so than the dynamic winged pose but if I was ever to use these on the standard Tyrant I may have him with Armoured Shell and the weapons are bulky enough to get that across. What I would put on his other limbs I don't know, perhaps some of the spare tiny Mawloc claws. 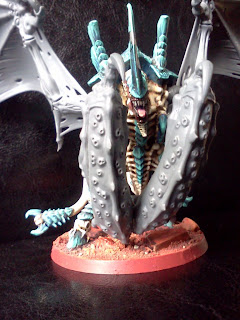 I've started to magnetise the Swarmlord's Bone Sabres but the drill bits were so sharp they've torn through the edges of the plastic, less a cavity to slot the magnets in as a crater for them to rest on :( Still I'll fix it somehow. The great thing is when they're done I'll also be able to mount them on the Winged Tyrant - him leaping through the air! 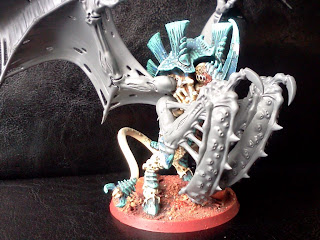 One last thing to consider is that my next Throne of Skulls tournament is due in March and I think I can get the Winged Tyrant painted by then and it will be cool. So, do I take him? He's 260pts in a 1500pt list. I'll have to drop a Brood of Stealers but the lost Broodlord powers will be made up by the Tyrant and also my Prime and Warriors but the two Tervigons and two 10 man squads of Devgaunts [although whether I make both Tervigons troops when I could keep one as a HQ for my Warlord, safer than the Tyrant].

I feel less confident with the Winged Tyrant competitively. It's a shooting magnet and if it dies that's a lot of points gone but with it I have something that can tackle flyers [just about] instead of ignoring them and alternatively cause mayhem in the back field with the Doom. Otherwise I'll stick to pretty much the same list as last time, just without the Hormagaunts and maybe more Hive Guard. What do you think?
Posted by 40kaddict at 12:39