Here's the tail of the Winged Hive Tyrant. I've stuck it to a piece of slate, it'd be rude not to, and I've another few bits that will be thrusting out of the Ferron Proxima sands. Another wandering adrenal gland will be making an appearance too. 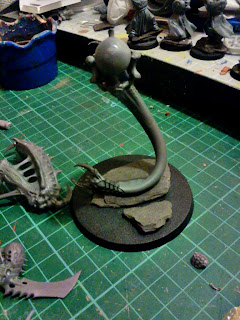 Having magnetized the arms I wanted to create some kind of mechanism that would trap the Fleshborer hive arms against the wings so they don't flop about. You can just make out a claw from the monstrous Scything Talons [the ugly ones ;) ] that has bee stuck on the top of the shoulder. In fact this doesn't silve my problem, and neither did the second claw I attached, both seemed to be on the wrong side of any protuberances to trap it in the direction gravity was pulling it, ha, ha! 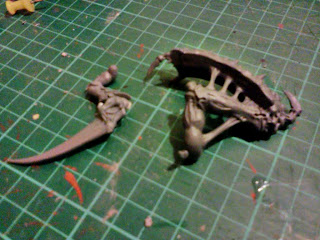 Having done a perfect job of drilling the body completely square I found out the Fleshborer Hives would look totally ridiculous positioned flat like the wing magnets. Therefore both weapon mounts are angled to allow the Fleshborers room and the Tyrants head to be seen between them. 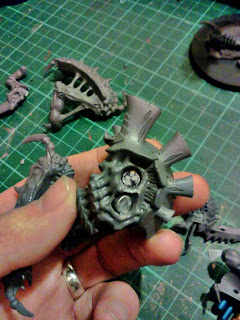 You can see just how far I had to angle my recently salvaged Magnetix magnets, costing me nothing from my Son's long unused collection and rightly so given most of them were recalled due to kids swallowing them! 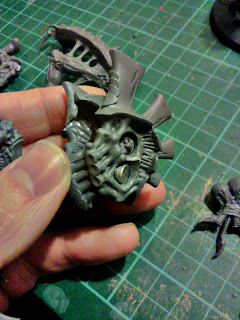 Here's the Right arm, again sitting quite proud of the torso to allow some space between the two arms. The exposed magnets will be covered with Milliput to disguise them. 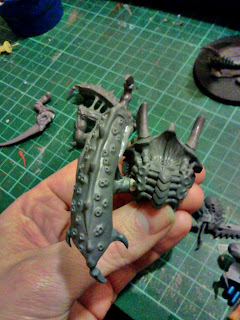 Here you can see the magnet in the arm. The Magnetix sets we [shown below] had included the standard bar shapes which had magnets bigger than 6mm tall and diammeter and then the smaller ones fromt he more dangerous connector pieces in the second picture. The arms have the smaller magnets and the torso the bigger ones. 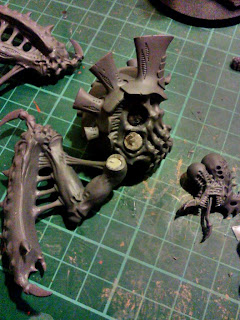 Here's everything in place. As you can see the left arm does hang down low despite my 'trapping mechanism' but the arms are significantly separated to not make it look dumb. 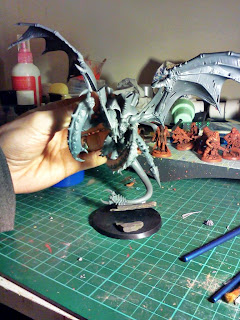 From this angle you can see that rather fortuitously the slightly 'droopy' left arm works quite well and the Tyrant seems to be banking to it's left with the left arm dropped and right raised it's turned it into quite a dynamic pose [thankfully]. 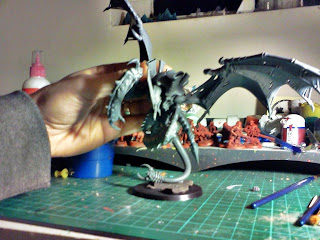 The Fleshborer Hive also points quite neatly to its right knee and visually takes up the same space as most of the torso preventing the Hive's from dominating the model too much and making it look too bulky to fly. As much as I liked Jes's original model I think mine's going to look even better.
Posted by 40kaddict at 12:39