1500pt battle report - nids Vs Necrons in the 'Dividing Line'

I've had the Dividing Line Mission for quite a while now and thought it was finally an opportunity for Ben and I to see what it was like. essentially it's a Dawn of War set-up with two objectives, one in each half of the board and the board is split by a force-field of some type. The force-field has five emitters running up the board [the Necron devices as used here] Av13 3 Hull Points. Nothing can shoot or pass between the emitters if they are intact. Should an emitter be destroyed models can cross the line following a difficult and dangerous terrain test. Units can shoot across the line, but use the night fighting rules and those being hit receive a 5+ invulnerable save.


OK, the setup picture below is NOT what I expected/wanted to happen. Ben won the right to setup first and decided to camp everything behind his Defence Line except his Night Scythe and a unit of Immortals - presumably going to come in on my half eventually for my Tyranid objective. So given the difficult ground on the left and the rather large killing field I was forced into setting up on the other side of the 'Jurrassic Park' fence. 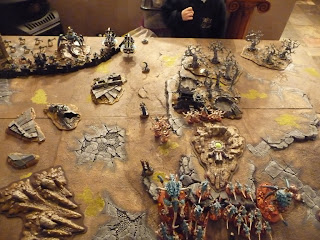 Pretty much everything sat there on the wrong side of the fence, but at least safe from harm, for now. The Stealers infiltrated in a hope to reach the 2nd from top emitter and trash it so we could sally forth across the breach. 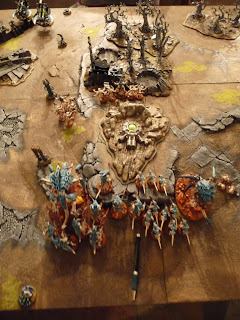 Ben was quite happy to sit back and wait so at least the first few turns would be quick. 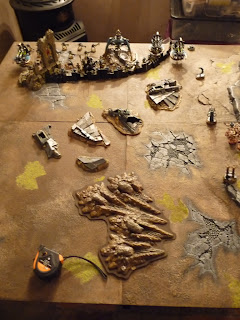 I won the initiative and barrelled forward, the Troop Tervigon spawning 10 [with doubles] to secure the objective. 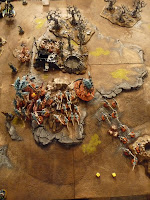 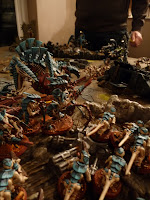 In Ben's turn he repositioned some of his force, but not by much. 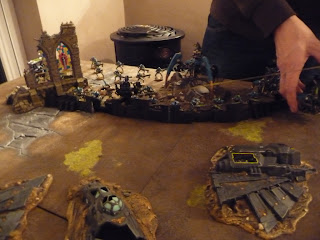 Turn two and everything continued to move forwards. 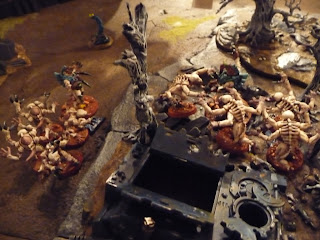 Annihilation barges at the ready for any Xenos incursions through the force field. 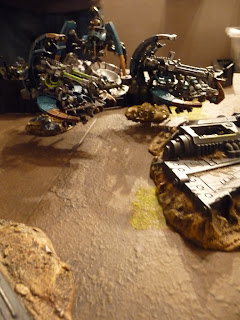 The Tervigon and Hive Guard pushed on through. Ben had the Stormlord and had been hitting me with lightning each turn and would continue to do so for the entire game. I believe there was no outright massacre of a squad or unit but with 5+ turns of night fighting and lightning there was a persistent small loss of figures/wounds each turn. 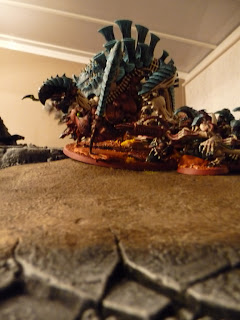 My Trygon turned up for deep strike but I was forced into putting him on my side of the fence for fear that putting him on the other side would have seen 1500pts of Necrons shooting at just one target... 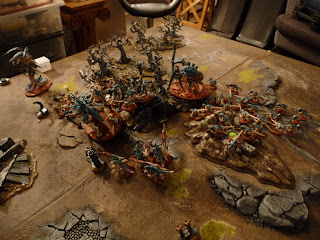 Necrons shuffled about a bit again. Ben was showing no signs of cracking the force-field emitter and for fear of spending the entire game on one side of the fence [that I actually 'brought to the table'] it was going to be down to me to rip it down... 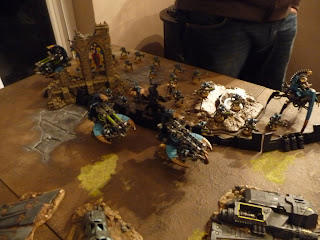 The stealers charged in and managed to trash the emitter, now the game was on! They'd also been endured and the Broodlord was Iron Armed up, but not by much. 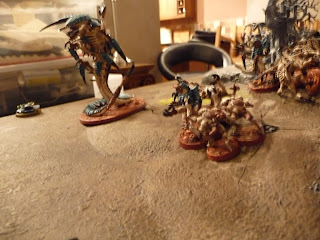 The HQ Tervigon suffered three wounds despite the 5+ invulnerable save. 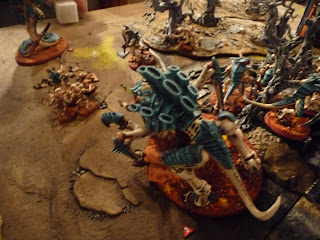 A warrior also suffered a wound probably thanks to lightning. 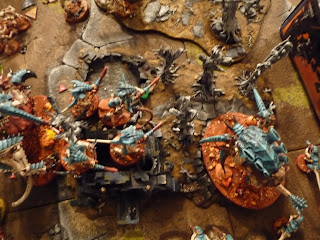 The Doom arrived pretty much spot on and thanks to the new FAQ allowing it to disembark 6" from the spore pod as opposed to the original Codex 2" suddenly he was in cover and within 6" of two units. Unfortunately he wasn't able to leech more than a couple of wounds. 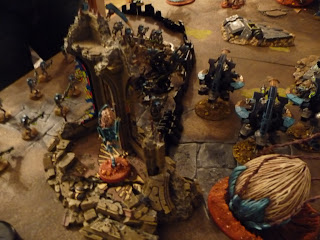 Even worse the Quad gun used it's interceptor fire to shoot the Spore Pod before it could lash the back of the nearest Annihilation Barge :( 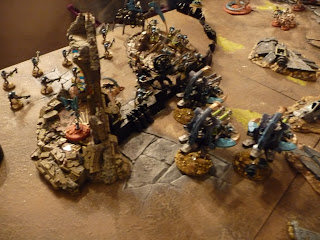 The Trygon, Tervigon and Toxin Stealers crossed the Force Field line with the Broodlord taking a wound from dangerous terrain. Everything else moved up on the nid side of the fence to still get an invulnerable save and be out of range before breaching the field line. 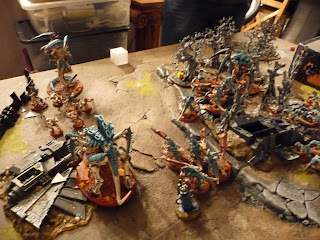 Ben's Immortals suddenly arrived in a flash, his Cryptek holding some arcane device allowing them to deep strike, oops. Usually I leave slightly more in reserve backfield but given the need to get upfield I was suddenly completely out of position and the ten Termagants holding my objective looked doomed. 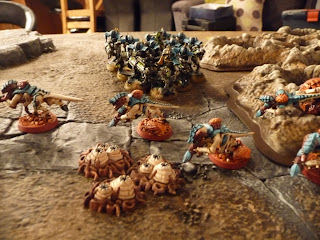 One of the Hive Guard was shot down, they'd been practically non-existent up till now. They did eventually Immobilise and Annihilation Barge but of course that still allowed it to fire... The Toxin Stealers were reduced to one but the Adrenals managed to arrive in support meanwhile the Trygon had taken 4 wounds and wouldn't make it across the Necron Defence Line. 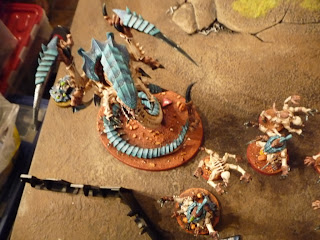 With only two Broodlords and a Stealer remaining, not to mention the destruction of the HQ Tervigon my 'BIG push' was well and truly stamped on at this stage. One last gasp was to get the Broodlords into combat with something over the wall. 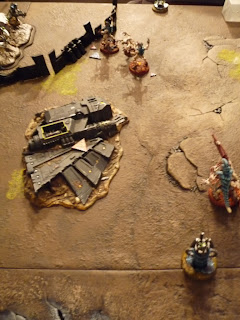 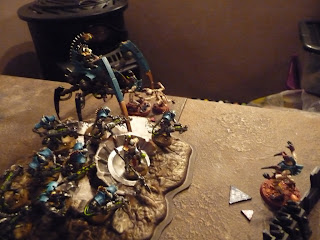 The Doom managed to float out of cover and I had a really fun moment where I was looking forward to using his Quad Gun on his own troops only to be reminded of my most bemoaned fact ever - nids can't use the Quad Gun! How did I forget that? Anyway, he still had Cataclysm to cast but the Immortals denied me. I'm assuming I still had remove D3 wounds for using it, hence why I was left with just one wound left :( It doesn't seem to be getting any better. 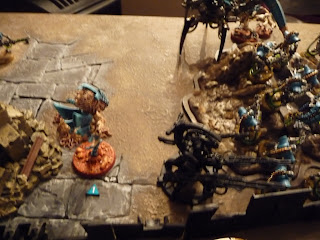 Meanwhile I tried desperately to shoot or delay the Immortals near my own objective. 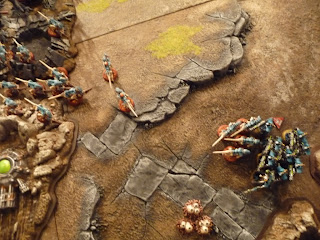 But clearly to no avail as all my gaunts were slaughtered and my Devgaunts were reduced to 3. 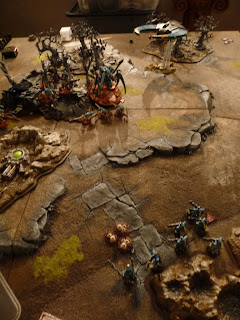 I'm sure the game went on a but more but the result was inevitable, with First Blood﻿, Linebreaker, Slay the Warlord and both objectives I had no chance. I'm not entirely sure what I killed, a handful of Immortals but not much else. If I'm brutally honest this wasn't a good game and I'm pretty sure Ben was of the same opinion. What I hoped would be an interesting tactical challenge of running two smaller forces ended up with us on completely different sides of the board. Nothing happened for two turns except getting struck by lightning. In some respects this makes the game even more dismal as even covering that ground in safety was not sufficient to prevent my near extermination.

Of course I could have started split up but I'm pretty sure that having half my force on one side against all his Necrons would have been suicide. Equally I could have not knocked down the force emitter, then we would have both been waiting for the other to do it and it would have been a pretty dull affair. The big question was what factor was causing this mission to not function in 6th Edition, it being afterall a 5th Edition scenario. I asked Ben if:
His suggestion, and probably the best option, is that in the setup rules perhaps a stipulation that whatever forces are deployed in your initial setup the units must be split evenly either side of the Dividing Line. Hopefully this will then force people into making those crucial decisions about putting units where they are most needed.

I really hoped this was going to be an interesting and different battle report and the sad reality was I doubt we're likely to play this again, even with the 'fixes' to the mission, which is a shame. Hopefully someone out there will give it a go and prove it's worthwhile. I believe in it, I've just came away with a real downer, hence the poor report and in fact it's brought a real slump in blog posts too. I've run out so now it's time to look at what I've got and  rediscover my mojo, fingers crossed.
Posted by 40kaddict at 12:33