Well, I have been since last Friday. The wife decided to come back a day early because she was going to see Adam Ant in concert on the Saturday and didn't want to be driving back on the day when she had to 'tart herself up' for the Prince Charming his-self.

The holiday was OK and I did manage to get some 40k related goodness: 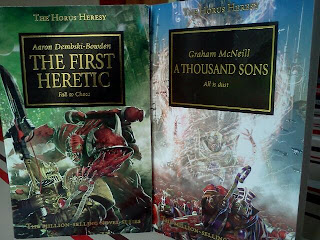 There was a discount bookstore in Llandudno that had a 3 books for £5 offer so I picked up these and to follow up my Clive Cussler obsession I also picked up these: 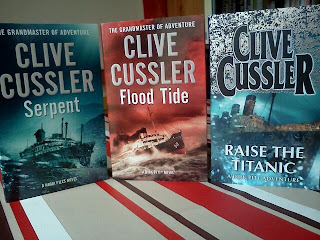 So I've plenty to read over the next few months. On my return I was also chuffed to find DoW: Dark Crusade - an ebay 'WIN' for the grand total of £1.99 [although I actually thought it was Soulstorm I'd bought?] a damn sight better value than any Fine Cast at the moment. As mentioned before my graphics card really isn't up to DoW2 so I thought if I went for a DoW supplement it'd play successfully and I could postpone DoW2 play until I could afford a card that would support it.

So I've pretty much been 'owned' by this, pulling in some 1:00 am and 1:30am sessions, which is odd as I was aching to paint while I was away, I didn't take the Prime in the end. The single player scenario is less defined as it tries to cover 6 races instead of just following the Blood Ravens. However, it's got an element of 'Risk' about it with a map to conquer and resources and upgrades similar to DoW2 [the bits I like about the sequel]. I've also got my son interested in it and he arbitrarily chose Necrons for his campaign, though it's painful watch his attempts 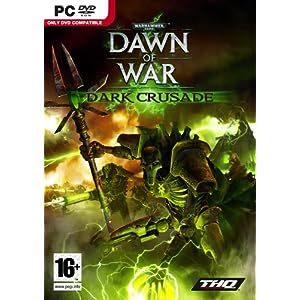 So with this so much an obsession at the moment I'm not sure where it puts the 'gaming/modelling/painting' side of things, and there's not much I can report back to you about this sort of gaming. I've a bucketload of pictures I took of some of my other bits and bobs - the remainder of my Epic stuff, Dwarves and some of my earliest figures ever. So there's still a fair amount of content to come, I'm just fearful that at some point I'll run out of steam, but I said that about five months ago and I'm still going...
Posted by 40kaddict at 12:36