Here, we have a couple of steps in the fences. Below is where I was at after putting all the pale blue 'reflective' metal effect in place, the second set of pics show it better. I appreciate it may not be realistic but there's something 'right' about it and I think the result is really effective. 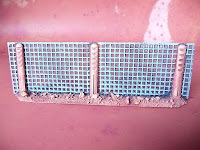 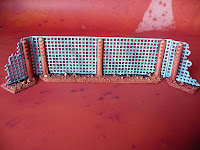 These two shots show the two styles of metal I produced. A single reflection and a double. The double may be more realistic but there was something about the single in it's cartoon boldness that just worked so I think 10 or 12 of the 14 fence panels are single style. 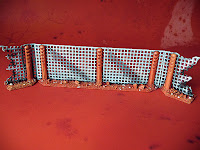 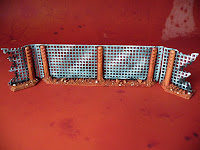 The result is something I'm so happy with I'm not sure whether to continue with the weathering. I like the idea of doing and I've certainly got enough fences that I could weather just half of them and still not end up with a mix and match on the battlefield that ended up looking odd. On the other hand much like having an entire army painted in the same style it's incredibly satisfying to see all 14 panels, plus their damaged counterparts in a box lid together so I don't want to lose that mass appeal.

To end here's the inspiration from the train station. Not quite as blue looking in real life but you can see there's plenty of marks, stains, rust and weathering that I could achieve with a watered down Tin Bitz, sepia and Devlan Mud washes and some brown and orange rust effects... 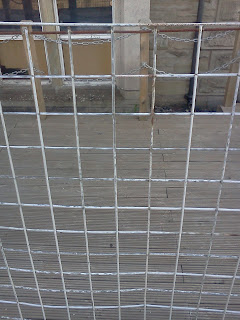 P.S. some electrified fence warning signs to add and having observed some rust on Llandudno pier on my holiday recently and just how random it can form I think I could get away with a few fence panels being rusted up and the remainder being pristine. If I ever get the urge I'll test my skillz!
Posted by 40kaddict at 12:30