As promised here is my Ravenwing setup. I'd got a couple of bikes with vouchers and stuff and then needed that third to form a complete squad. I was really lucky and an ebay 'win' gave me another four 2nd hand for less than the price of one new one! Of course with my Ravenwing upgrade sprue [which was around £4 on ebay too] I could prep these three and sell the three spare making them practically free! But I thought  'sod it, I'll have six of the beggars' and eventually ordered another upgrade sprue! 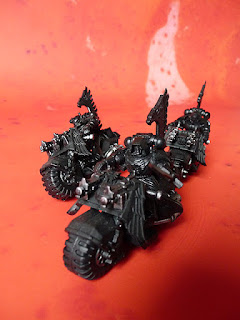 I'm painting the bikes and riders separate so I can get in all the nooks and crannies, so far I've only added the boltgun metal and silver to the black undercoat. Going to add some sepia heat scorching on the exhausts [or maybe use Tin Bitz in places]. 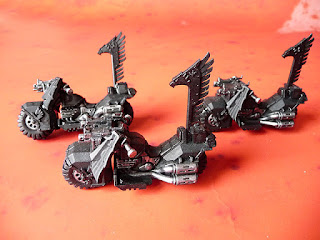 Still to work out the colouring, I'm confident on the highlights for the black I'm just worried about too many colours getting involved with the Ravenwings. I mean the Code has them white and that looks cool and I've options to do them a cool white with my Anita's Pale Blue or a warm/dirty white that will tie in with the Deathwing if I use a sepia and Devlan Mud bonewhite base for the wing but part of me is wondering what raven has white wings? 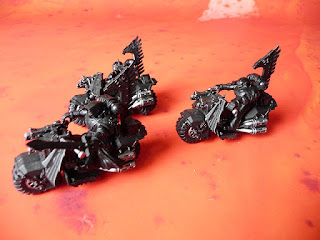 Here are the other three bikers still to be 'Dark Angeled up'. Can't seem to see a way to remove their helmets so I can replace them with the ones from the upgrade sprue. I'm also looking to arm them with flamers as they could do a whole lot of damage to a nid horde as the burn past. So that's another purchase! However, as I am also on the look out for two missile launchers for my Devastator Squad and the new ones won't fit my 80's retro models and the 2nd gen ones were rubbish I may go all nu-school retro with this from Forgeworld. Although I don't like the old flamers but I may end up selling them to replace with the plastic ones... of course waiting to purchase these puts the painting on the back burner for now unless I work out a way to carry on without their guns in place, I mean it is only two of them. 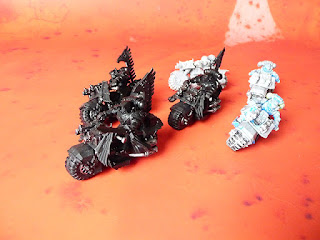