Terrain is everything - 'nid reclamation pool or digestion pit.

For my birthday this year I got given some GW vouchers. My good friend 'Big Pete', was the person who introduced me to the games of Games Workshop back in the day, until then I'd only been interested in Citadel Miniatures. He had Blood Bowl, and I wanted Blood Bowl, though I wasn't keen to field the Middenheim Marauders like he did. He got Rogue Trader and eventually so did I.

I think he was even the first person to have the first Epic Space marine game, whilst i'd opted for Adeptus Titanicus. As time went on my 'dealer' dropped out of the gaming, I think I ended up buying a lot of his stuff, Reaver titans, a load of epic Land Raiders. I suppose it's hard when you don't have a support group of other kids locally who do game and Big Pete lived a few miles away which may as well be a galxy in kids terms.

Anyway he got me some vouchers and I'd ummed and ahhed about what to get with them. In the end I got a number of things, some assault jump packs having ebayed some original lead ones way back when, some washes, a space marine biker and the moonscape. Now I'd looked at making my own craters, it seemed pretty straightforward in some tutorials but with all the other terrain I was working on I just wanted something done, so I went with them. Despite having seen GW's original crater pieces from 20 years ago, thin vac-formed objects that were dirt cheap but about as bland and featureless as the latest X-Factor winner.

These were considerably better quality and with a mounting card base and sharp sand applied they look really neat and far more durable than their forefathers. I'd stumbled across a White Dwarf article on how to convert one into a Tyranid reclamation pool so I thought I'd give it a go, my son does have 'nids afterall. 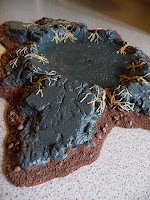 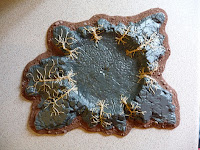 The first bit was tentacles. The tutorial suggested wire, but I wanted a more organic War of the Worlds spreading weed so I sued string, unwound and soaked in PVA wooden stirrers and pins helped separate the strands and thread them through all the handy cracks moulded in the moonscape. 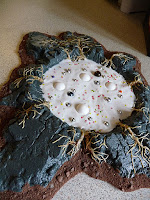 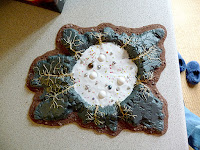 Next up is the pool, a mix of PVA and talc forms the base with an assortment of balls to rpresent bubbles. I had some paper ones, beads from necklaces and christmas decorations but my 'inspired' idea was silver ball cake decorations and 100's and 1000's. Loads for cheap... WRONG! the little bleeders melted in the moisture in the PVA. OKK they left some nice 'popped' bubble impressions but it's not the effect I was after. 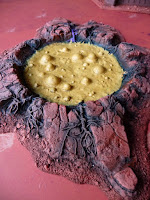 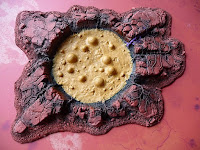 Next step was the painting. The usual undercoat of black household and craft paint mixed with PVA glue and a small amount of plaster as an ideal base for the Red Oxide spray paint. Further shading and highlights were added, note my initial plan to go purple on the weed... what was I thinking? 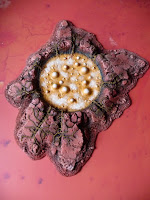 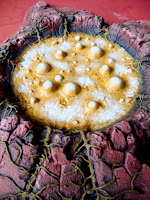 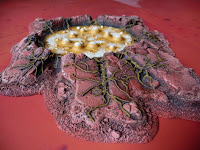 Here's some highlights on the pool itself, not sure if it works convincingly.

Lastly, I was desperate to get a depth to the pool, I looked around for some form of resin that would n't break the bank and came up with the VerniDas varnish which was only a couple of quid from my local art store. It still shrinks when dry so I may have to apply a couple of coats, hopefully it won't react with itself like some do. I also finished all the weed/tentacle highlights.

The conclusion to this story was that my son and I had been going to GW in Southport for a few months and the Online team were visiting to take pictures. I took along the digestion pool and his Tervigon to be photographed and obviously the 'following a White Dwarf tutorial' factor was enough of a draw to mean they used it on the website, woohoo! You can see the final highlights on the weed, some blending on the red planet sand and the glossy VerniDas in their picture.