Terrain is everything - 40k outpost, that got bigger Pt 1 'the outpost'

This was the first piece of terrain I started. I'd just joined TerraGenesis and I saw a guy called BugbaitNZ creating a planetary defence platform for a competition. The tower he was making for the gun emplacement wasn't going to get finishe din time so he made a hexagonal base which is what I decided to copy to just see if I could do it.
And it turned out OK, only the problem was it was much bigger than I expected and totally dominated our small battlefield. I had to do something to make that real estate worth more than the low level cover it was representing. So I started on my modularity complex and hacked at the rear wall in such a way that i could position a 3 storey tower into the out post. This can be detached to form a separate tower if needed or leave the outpost on it's own or joined together.
As you can see the tower was a considerable jump in detail and complexity but I'd been convinced I could do it following the success of the outpost. My only regret is the use of a lever arch file cover for the base. I thought it was the moisture in the PVA that warped card and as the cover was plastic coated it wouldn't warp. WRONG! It's just PVA shrinks. If it's not dimensionally stable your base will warp, FACT, so deal with it. 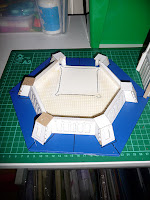 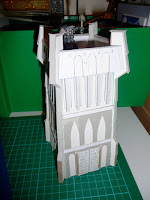 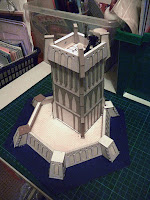 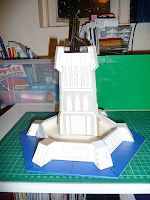 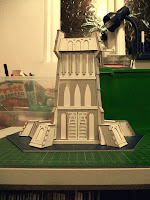 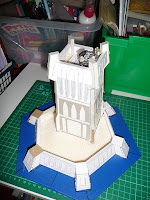 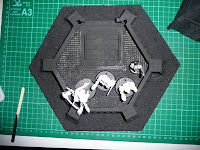 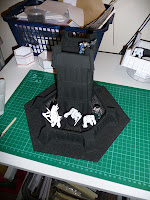 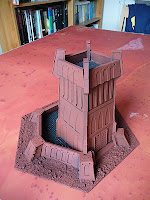 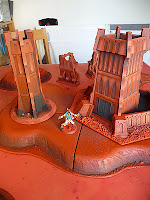