A ruin of a rule

As I stumble through my new experiences with whatever edition 40k is on now occasionally a rule will come up I don't have an answer for, I'm sure we all suffer this. Anyway my son was playing a game with his cousin. He had a Tervigon and 16 Termagants in tow. A squad of terminators were on 3 floors of the ruined building pictured below. 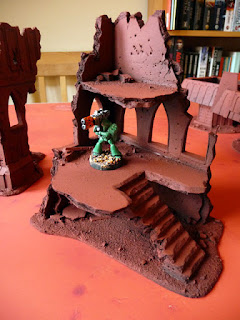 Now they never actually got into combat because the game had to finish, that's the price you pay when your battlefield is the dining table! But afterwards I debated what my son should have done and it raised these questions.

The termagants aren't going to want to assault through the ruin as that'll make their Initiative 1 so what if the Tervigon destroys the building then the Terminators are denied their cover, so I asked the following on the Bell of Lost Souls forum for answers

Tervigon assaults the building- it penetrates roll on vehicle damage table.
Immobilised - does nothing.
Wrecked - terminators disembarks up to 2" away and pinning test [would you put a crater down? would it be difficult terrain? would the termies be allowed within this cover considering they had to disembark].
Explodes! - everyone takes a S4 hit and positioned where the building used to be and pinning test [no crater placed, or would it?].
If the tervigon's termagant spawn then assault any pinned or even unpinned occupants would the occupants get the 'assaulting through cover' bonuses?
What I'm getting at is if models are in a building and you destroy the building which was giving them the 'assaulting through cover' bonuses would they still get them if you destroyed the building?

The responses were mixed but I think I understand what would happen now and there's a fundamental difference between a 'building' and a 'ruin' [or 'ruined building']. Apparently a structurally sound building is like a vehicle, you can assault it and destroy it just like any transport. A ruin though is difficult terrain, you cannot assault it, you cannot destroy it so there is no opportunity for the mighty Tervigon to smash a rickety unstable ruin to pieces.

Which just makes no sense to me.

When you consider most of GW's building kits are 'ruined' I'm surprised this isn't a major issue. Together with the fact even in the rule book they suggest often it is better to assault a building than trying to assault the occupants because of the Initiative modifier. However, as the moving through difficult terrain test suggest that people use micro grenades, cutting tools, or acid to dissolve holes to negotiate the terrain you could easily suggest, in a friendly game, if a Monstrous Creature walks through a ruin and passes the test the ruin is flattened. Although I still prefer the idea a ruined building should be a valid assault target, so that may be our house rules.

Of course even if my option of destroying the ruin was agreed with an opponent and the Terminators were 'dismebarked' outside of the cover the Termagants would not be able to assault because you have to nominate who they're assaulting before any assaults take place. If you nominate the Terminator squad they'd have to be in the building when the Tervigon rampaged through it.