Falling off the wagon part 2. Assault on Black Reach

Unbeknownst to me our town centre independent newsagents had been under new management for quite some time. This newsagents had always been quite large and had an art section at the back. Aside from my trek to Liverpool when I first started down this path there was only this shop that stocked Citadel Miniatures. I recall purchases of samurai, ninja and a strange passion for half-orcs? Individual blister packs were 60p, although I do recall paying 50p on occasion.

Anyway, decades later the new owners had reintroduced GW products as an Independent stockist. My wife just casually dropped it into a conversation and I had to return to my roots! Suffice to say it was an odd feeling to go back and see their new stock and even more exciting when I saw Assault on Black Reach for around £45. Cheaper than GW! So I actually said that that was all I wanted for Christmas.

On the day I didn't get it. Santa came and went but in the morning there was no 'game in a box' sized parcel. I really was like a kid let down on Christmas day. Then my Mother-in-Law comes over to drop off the presents Santa left at her house. It seemed I'd been a good little boy afterall and the game was mine. Saying that having trimmed all the figures from their sprues I've never had a game with all the figures provided. It would take part 3. of falling of the wagon to really push me over the edge - The Shadow in the Warp 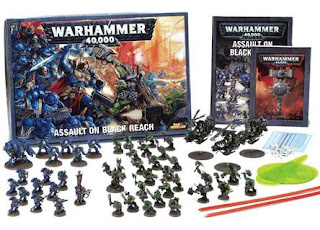