Falling off the wagon part 3. The Shadow in the Warp

So for Christmas 2009 I got Assault on Black Reach, but it's one thing to get the game, it's another to play and really the only incentive is if you have someone to play against. I've got 1000's of points of Space Marines but they had absolutely no interest to my eldest son. He was only interested in Tyranids and with his birthday coming up and a new codex due at the same time he had plenty of birthday money to invest.

Now I loved the 'Without Number' rule in the old codex whereby if a gaunt was 8pts or less, for an additional 3pts each if the brood was wiped out they could be brought on again from the Tyranid board edge. What better way to prevent tears and tantrums than a constantly respawning battleforce. Anyway that rule went by the wayside and the Nipper got a box of Termagants, Warriors, Gargoyles and a Trygon to add to the Biovore he'd randomly bought at some point.

It was my job to get the paints and work up a paint scheme. I knew I wanted to do it blue because the Nipper's favourite colour is blue. I also looked at all the new stats in the codex and realised those gargoylse were rapidly going to suffer when they got out of Synapse range so would probably need some Shrikes to go with them. Looking up Winged Tyranid Warrior I saw a nice conversion on a website called Necrotales. Suddenly I had the inspiration for the colour scheme I wanted to do... 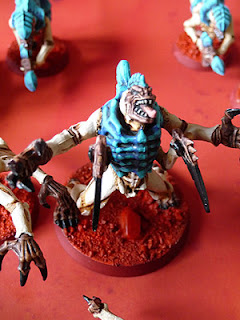 So you've already seen my son's Broodl﻿ord [in a body warmer] from when I discussed cheap terrain materials. But you can see quite clearly the blue and bone white scheme I developed, we'll get to see more of these beggars over time.
Posted by 40kaddict at 17:13