Afternoon #WarHamFam and #WarhammerCommunity it's Middle Earth Monday! I've been playing #MESBG [Middle Earth Strategy Battle Game] at Otty's again. He recently finished some terrain to use for the Escape from Dwarrowdelf scenario. Here the Fellowship have abandoned Balin's Tomb and are running across narrow walkways, assaulted by Moria Goblins.
In this case Liam had to get 5 of the party off the walkways, 1 of which must be Frodo. As the Goblin player I rolled a D6 to see how many goblins come on [Cave Troll is worth 5, Sergeant is worth 3]. Then I roll a dice to see where they come on. 1, from the right, 2-5 the left and 6 they can climb on anywhere, except a section that has a member of the fellowship on. Lastly, when doubles are rolled for Priority a 1" chasm can be placed by me anywhere on the walkway, but not within 32 of another chasm or on top of a model.
I rolled a 5 right off the bat for reinforcements and decided to bring the troll on straight away while Liam rushed the Fellowship along the path. 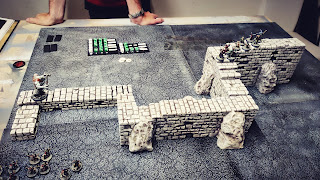 I continued to move forward with 1 additional Goblin joining the fight. Legolas hangs back as a rearguard, just in case I roll and 6s. Gandalf casts blinding light and channels it to ensure all my future shots are at -1 to hit [hitting on 6s] 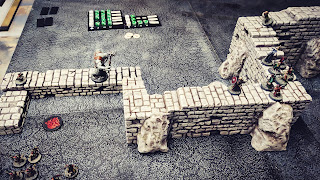 Boromir, Aragorn and Gimli [BAG] are nearly on the Troll and I bring on a Goblin Sergeant for added support. The Troll suffers a wound, I think from Legolas who's still holding the rear. 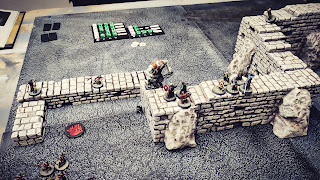 DOUBLES! a yawning chasm opens up between the Troll and BAG, I'm hoping someone is going to fall down it as they jump across but before that Gandalf casts a spell to control the Troll moving it back. I'm happy with that as it gives more space for BAG to jump across but then I discover the Troll is unable to hit back in combat... 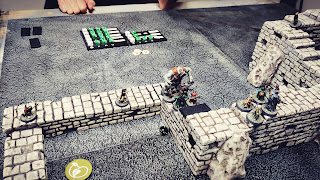 Which means he's easily bested in combat by the heroes. 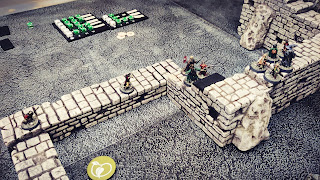 A fair few reinforcements have joined the Goblins. Merry fell jumping over the chasm and as Pippin leaned over to see if he somehow survived 4 newly arrived archers fire all their shots at him. 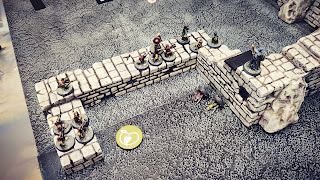 Even under Gandalf's blinding light the find their mark and he falls to his cousin's resting point. 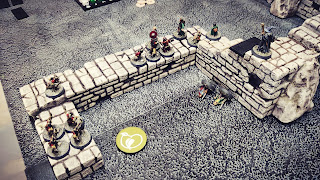 DOUBLES! Another chasm opens up, forcing Boromir and Gimli to jump across without Aragorn. More archers join the goblins but with no success. Gandalf jumps across the chasm and Legolas races to catch up with his friends. 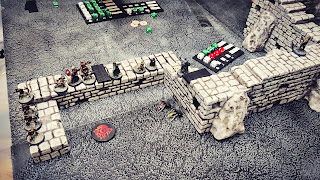 DOUBLES! Yet another chasm prevents Gimli from advancing any further. 4 archers appear on the far right with Legolas catching up. Gandalf and Aragorn jump the 2nd chasm. At this stage I'm relying on chasms to kill off the Fellowship. 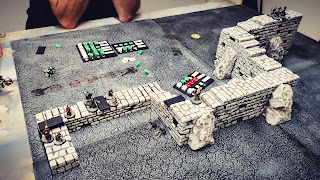 I won the priority but there was a bit of a mix up with a Mighty Advance move Liam going first, all sorts happened, Gimli fell jumping the final chasm and some Goblins were killed. Unfortunately the order was wrong and we had to reset, which is lucky I have photographic evidence of where we were at. The Hobbits jumped the chasm. 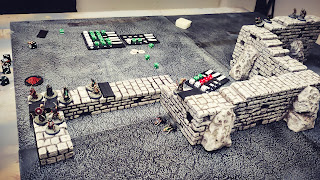 So Gimli survives his leap this time but Boromir does not, I think he was actually killed in combat, trapped against the chasm I had the Goblin sergeant, plus spear support shove him off. Aragorn jumped across to avenge hit sword brother. 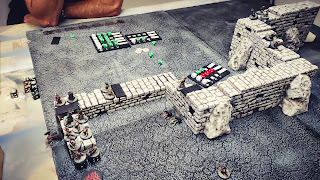 More Goblins were waiting to come on while the archers on the left had to start running to catch up as Legolas was 2 chasm's from escape. Gandalf had fallen, but the Hobbits had made the last jump. The Fellowship could suffer no more casualties or their mission would fail. 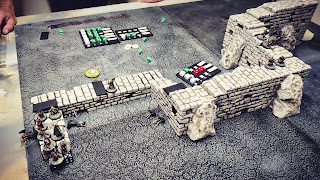 The Hobbits escape with Aragorn and Gimli holding the doorway to prevent anymore Goblins coming on. 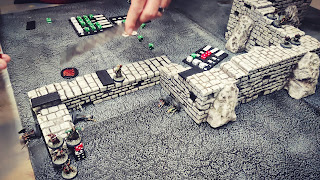 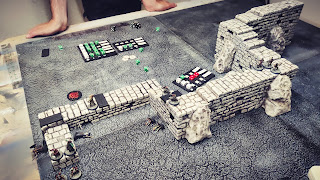 And with graceful Elven dexterity makes the final leap to join what remained of the Fellowship. 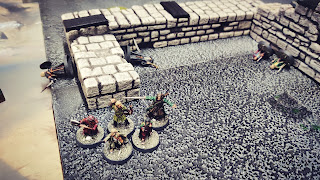 So I lost [again], but like my attempt at Balin's Tomb there are far more dead than survived in the film. I mean who is going to stand against the Balrog in the next mission now Gandalf has died? This was a lot of fun with the chasms with chants of "anything but a 1" reverberating round the shed with each jump and howls of joy/frustration when someone failed their leap test. Some of the other guys have tried the mission since with hardly any chasms appearing. There was also debate about me bringing the Troll on so soon - he may well have been more useful toward the end. But, he forced Liam to burn up Might points early on to secure its demise, which meant they couldn't alter the fate leaping or in combat - six of one, half a dozen of the other...
Posted by 40kaddict at 12:46