Afternoon #WarHamFam and #WarhammerCommunity - I've been playing #MESBG [Middle Earth Strategy Battle Game] at Otty's again. After previous shambolic attempts to record my battles weeks after the event this time I made the effort to write the report soon after, which really helps. As he'd ousted me from my own Moria hex tile I was keen to recapture the caves and reclaim my 're-roll for climb/leap/jump'. That said two of my sergeants are injured so I was facing his Rohirrim with over 100pts less of my full warband. The points deficit between our warbands gave me 3 re-rolls and 3 extra influence points at the end of the game. We rolled Chance Encounter again - objectives is 'the leaders of both companies are looking for a quick victory, without taking too many casualties', however, the victory conditions are to reduce your opponent to 25% of it's starting models.
Luckily I got to deploy first and as I looked at my numerical disadvantage and the 6 heavy cavalry I was facing I was at a loss as to how I might overcome the odds stacked against me. I did the only thing I could and try to use the terrain to my advantage - setting up on the hill, with my faster Warg and Cave Troll on the far right flank, able to move through the trees without penalty because I hold Lothlorien. 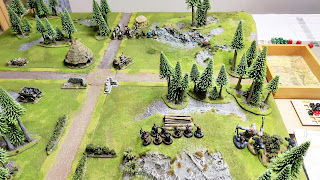 Otty won priority and sent his cavalry surging forward to 'the hill I was prepared to die upon'! Infantry, including a roaming spirit of the dead, a warrior and his hound went to come round the trees, while a small rearguard with the archers held back a bit. In response I drew further out of charge range on top of the hill - trying to create a choke point to face as few cavalry as possible. My Wargs headed through the trees and the Troll skirted the bottom of the hill behind the trees. 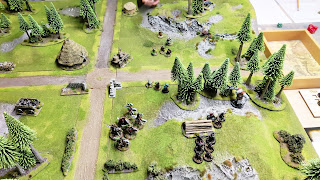 Otty was able to snipe one of my Wargs with an archer - so much for roving ahead under the cover of the trees. I was beginning to doubt every tactical decision I was making. Having withdrawn my Goblins further along the hill I realise it was perhaps another mistake. It delayed Otty's cavalry charge for another turn, with another round of him using his throwing spears. Luckily, I think no one died in the delay but he made the charge with just 2 horse warriors. 2 remained on the hill as back up, while the last two fell back to support against the troll. 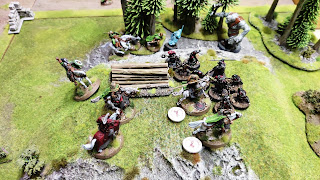 My Troll charged the ghostly Warrior of the dead, with a 12 on the Terror test. His rage managed to overcome it's incorporeal nature and he hurled it through the Warrior, hound and the cavalry. The hound and cavalry perished while the rest were knocked flat. My lone Warg had skirted the back of Otty's deployment zone, avoided a round of shooting and pounced on his rearguard archer, but cavalry was on the way and the Warg couldn't press its advantage. I snuck my Goblin Prowler past the main cavalry melee on top of the hill to tie up the secondary cavalry, somehow he survived. 2 more Rohirrim infantry broke through the trees to come up the back of the hill. 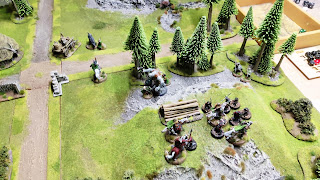 The Troll remained locked with the ghost but killed the warrior. My Prowler also kept two cavalry tied up and one of Goblin spears took down one of the horsemen, despite being attacked from behind by the two foot soldiers. 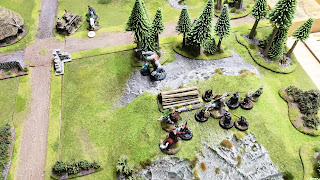 Otty managed to trap my Warg, but the dice gods were not with him! 🎲🎲🎲🎲 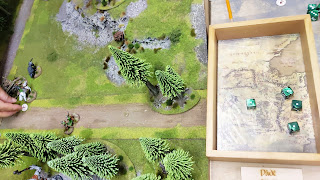 The combat on the hill just couldn't be broken. My Prowler continued to be a thorn in the cavalry's side. If I won the duel I failed to wound, if I lost the duel I somehow survived. This allowed my troll to finally kill the Ghost, he failed his Terror charge, but the host didn't fail its and paid the price for it's undead hubris. The Troll surged up the hill to try to break the deadlock. 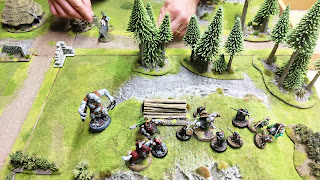 One Rohirrim left the fight on the hill, his colleague  surged into the back of my lines but not far enough away to escape the Troll. I was losing Goblins and the fights were becoming more even numbered now. 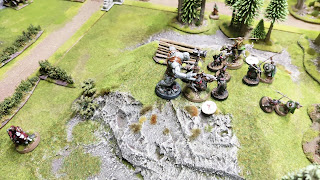 Despite this I was lucky winning some duels but then my luck evaporated and I couldn't convert that opportunity into victory. 🎲🎲🎲 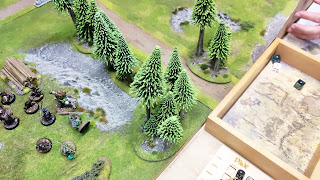 We were both losing the odd model here and there - Otty had the advantage on priority to cavalry charge but I just had numerical advantage to trap him, plus the Troll was unwounded and my Blackshields were as durable as Otty's Rohirrim. I used my last might point to move first, despite losing priority but prevent another cavalry charge. 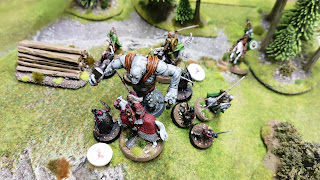 Despite the advantage I couldn't capitalise again, that last might point would have won me the duel against the green knight. Meanwhile the red knight threw all his attack on my Blackshield and suddenly those 1s became 6s. For a moment Otty thought he'd made a mistake not attacking the Troll, but he got double strikes on the Goblin, so wouldn't have had the dice to take out the Troll. 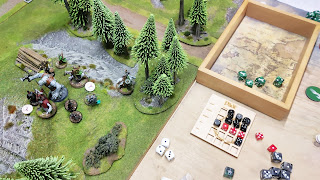 We were both approaching our 25% and Otty was struggling with his break rolls. He'd had a good round where only 1 Warrior fled out 5 or 6, but I think he lost 2 here and I may have lost 1. He may have reached 25% first but I followed shortly after but forgot to remove Mang [my little drummer boy] so it looked like I had 4 left and was in 33% and had won! 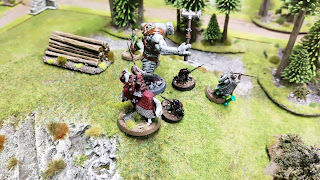 Of course I hadn't, it was a draw and I discovered hitting that Win button early on https://battle-companies-manager.com/ can be quite the inconvenience. I'm wasn't about to hit the 'back' button to try to fix the result and risk losing all the stats. I'd some how wrestled what I thought was inevitable defeat into almost victory! Luckily I could edit the extra experience and influence after the fact. I was really lucky with injuries though - Zit my leader was completely healed, including his leg wound! And, with +1 to my injury rolls, because I hold the Shire, I got two 'wounds of a hero' for an extra 8 Influence points. I ended the game with 22, enough to get me a second Troll. Nobody died, nobody missed a game and I have 6 Influence left to try to add a couple more Goblins and I got some heavy armour for my Leader.
This was an epic game, fun, tactical and although I still haven't recovered Moria I am absolutely ready to roll through everyone now, and reclaim what's mine!
Posted by 40kaddict at 12:41