Afternoon #WarHamFam and #WarhammerCommunity I've continued  #PaintingWarhammer Death Guard Kill Team. Technically my #NewYearNewArmy for #ArmiesOnParade. I shared the previous pics with my mates and Liam mentioned how they were more colourful than his own [and liked them]. I appreciated the praise, but 'colourful' was not what I was going for. So, I went back in with Army Painter Red Tone, Purple Tone, Green Tone, Strong Tone and Sepia Tone. That helped to make the red fleshy bits blend in more and grime everything down to a more muted grimdark palette. 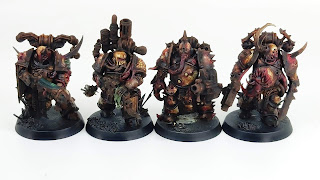 I chose a grey for the cloak, yes that's not grey, but originally it was and then add in all the reds, purples and sepia and we end up with pink drapes! I added some Death Guard Green straps in places. I also tried some Dirty Down Rust on the top of the back pack on the marine on the far left. It did work as it should [for once] but the results were too random, so I decided to stick to my weathering powder and rust wash mix. 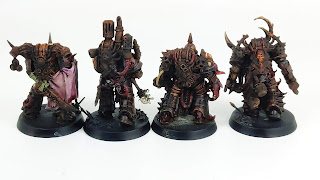 Which is where we are her, the 4th night of painting. Now I'll concede that all that effort griming up and darkening down has been somewhat undone by orange rust all over the place. But, I know that the Army Painter Anti-shine matt varnish will dampen this down a bit too. 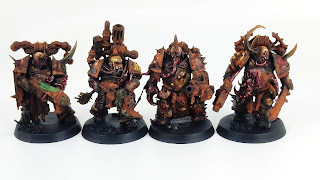 So it will be less vibrant. I may also work in some additional strong washes and sepia washes to break up the flatness of the orange. It all seems quite consistent across the model so some variety in the weathering could be useful. That cloak got even grimier! 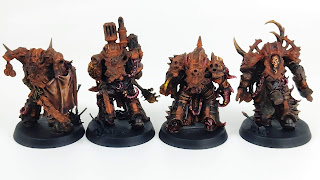 At this stage I compared it to the original test model and could see that the new ones should have more highlights on the armour to match... but I wasn't going to.

I was never 100% happy with the extra highlights. Don't get me wrong I love what I painted but it was more in line with what I would normally do and its brightness did not sit right with my view of these marines living in the most horrifically squalid conditions on their spaceship and in battle.

Add to that it was more effort and I made the decision that the armour finish on these 4 would be the new level and the test model would be the outlier. With that done the following evening I would pick out all the final details, make any adjustments and start on all the varnishes ready to add the gloss black 3D texture paint for the tar bases. The next updates are the TO DONE! pics, the last of the 2021/22 Season. More importantly I painted these 4 models in 5 days - take that Imperial Space Marines, I think I've fallen to chaos! That gives me a lot of hope for the remaining parts of my Kill Team. I've 6 plague marines to do and the Bloat Drone [for #DreadTober]. That's about 2-3 weeks work and I'd be happy with that for AoP but there are 15-16 PoxWalkers that I could add too. They might be a little more of a challenge but I might simplify their colour schemes, choosing my favourite skintone from my Nurgle Blood Bowl team to use across the whole squad. Meanwhile, I may just highlight a few of my Ravenwing while I'm on a bit of a high...
Posted by 40kaddict at 12:23