Afternoon #WarHamFam and #WarhammerCommunity - I've been playing #MESBG [Middle Earth Strategy Battle Game] again at Otty's again. This was a very odd mission for Otty's Rohirrim and my Goblins. Chance Encounter's objectives is 'the leaders of both companies are looking for a quick victory, without taking too many casualties', however, the victory conditions are to reduce your opponent to 25% of it's starting models - so much for not taking too many casualties! I think this was the game where I was heavily outmatched and so had 5 re-rolls throughout, but forgot to use any of them!
Most of Otty's guy were in the top right, but there were a couple of archers in the copse on the hill top left, hence why my Wargs are heading in that direction. The rest of my force were going to use the rocky outcrop to shield themselves from any cavalry charges. 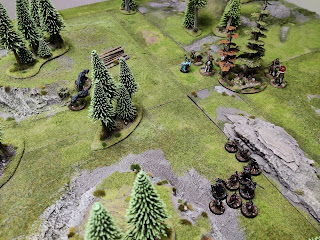 Which worked, to a degree as Otty split his force either side of the outcrop, it didn't help that he had a wandering ghost from the Army of the Dead in his ranks. 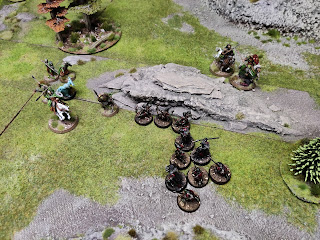 I must have used the terrain to my advantage, getting 2 Blackshields and spearman into the cavalry on the right and the rest trying to speed bump the rest of his force so my slow moving Goblins could find a way to swamp what he had. 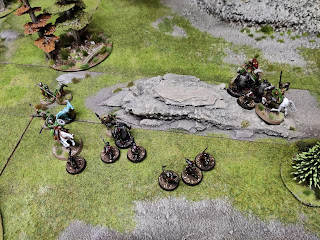 I must have been lucky as one of the Rohirrim has perished. 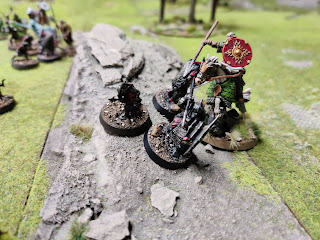 BUt the other knight takes retribution on my other Blackshield. 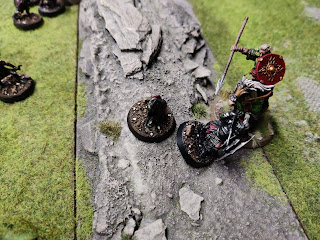 One of the Wargs had been killed by the archers, but the other made it to the trees and started to snap at the old guy and female before they could reload. It would ultimately take them both down. 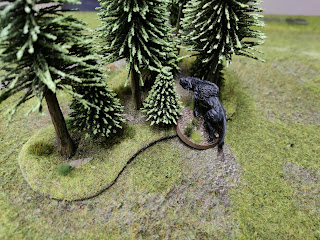 The melee continues in the middle of the board and my Blackshield and spear support prepare to face the cavalry again. I'm starting to lose bodies in the centre, but the Blackshield takes the second knight down too. 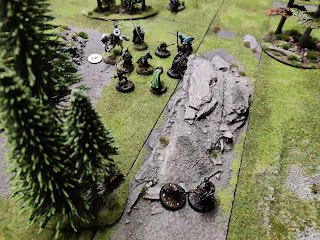 The army of the dead face down my Warg as it's races to turn the tide in the centre, while the last of the cavalry is out for blood on the Blackshield and he pays dearly. 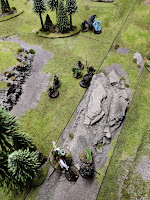 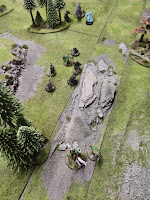 The Warg falls too and I think I fall below my threshold. It was only now we remember my re-rolls so instead we agree I get to use them on the injury chart, which was a relief as without them I'd have lost quite a few Goblins. As it was we thought owned creatures died outright, rather than roll on the wound chart and so I thought I'd lost one of them. Everybody else was OK, this may even have been where my Leader's leg wound also miraculously healed. So he went from a 4" move to 5", it couldn't have been better. Then Otty does the injuries on his female ranger, she gets just a scratch to miss a game, and just as I'm suggesting that might be a good thing as it'll lower his army points to not give up the re-rolls he rolls again [you're allowed to but must abide by the second roll]... 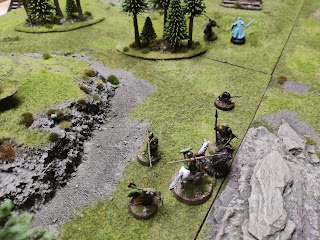 It turns out that scratch was properly infected and she dies. I was in fits, properly creased up on the floor laughing. It was so funny! 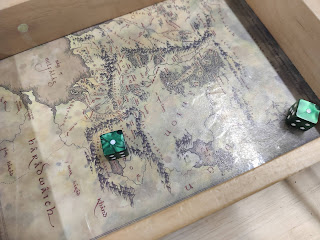 Here's where my warband was at the end of it. 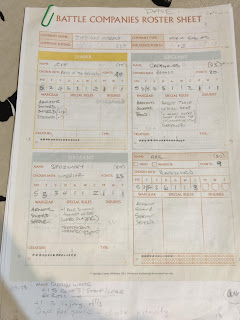 And, I'd secured enough influence points to finally bring in a Cave Troll as reinforcements. 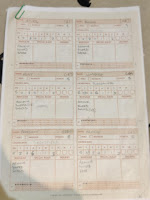 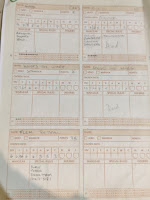 Add in how tanky the Blackshields had been and I was starting to think my warband had much more potential than I'd initially given it thought. I was securing regions of Middle Earth which were giving me additional bonuses - +1 on the injury chart and move through woods, re-rolls and +1 to climb tests, the ability to choose to take priority once per game - all extra rules that are the reasons I'm falling out with 40k, but they've been introduced organically and one at a time. Rather than dozens of overlapping stratagems, buffs and relics that create countless options these feel measured and contained. It's added to my enjoyment rather than created an obstacle. Any I forget, hasn't changed my enjoyment, because I can win or lose without them and losing is not as soul-crushing.
Posted by 40kaddict at 12:27