Afternoon #WarHamFam and #WarhammerCommunity although technically a 'content creator' I'm not on any freebies list, so when I finally got to #PaintingWarhammer with Citadel's new Contrast paints it was at my local Warhammer Liverpool store. As that was weeks ago it's a good job I'm not being asked too! This would be quite the missed opportunity to promote the paints this far down the line. So, what did I think? Well I briefly used the previous Iyanden Yellow on my Halfling Blood Bowl team and these are much brighter with less contrast between the light and dark areas. I've seen some YouTube reviews that categorise these variances within the range, suggesting there should be clearer marking to show those that have high contrast, those that are better coverage and those that are borderline washes. I played around with the yellow, an orange, one of the browns and turquoise [I forget the names]. 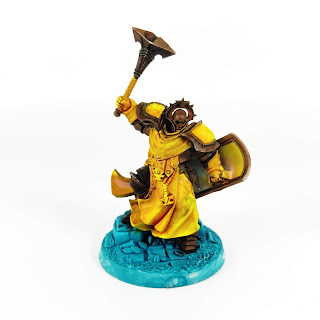 It's challenging, that's for sure. It makes you think differently about how you paint and how to cover up mistakes. I'd definitely be adding a lot more layers on this to fix things so it doesn't feel quite the speed improvement for me, although I'm sure with practice I'd get better. But the short term issue would be it's a step back in what I could achieve and I'm not really in a position to try that at the moment. 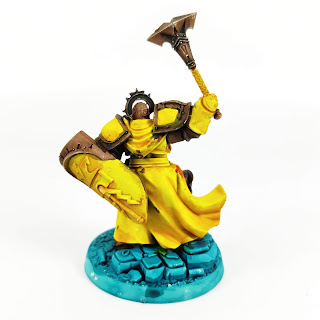 My issue with Contrast is it artificially creates areas of shadow, base and highlight. You have to manage how the paint dries to achieve that effect but it does it in such a way that the highlight is 'controlled poorer coverage'. When you're constantly being told you need 'two thin coats' for flat coverage it's quite the mind flip to then accept something that is deliberately less. The irony is that I don't usually subscribe to two thin coats. I'm quite happy to have poor coverage on that first coat, so that there is more texture and mix of opacities. So Contrast should be something I appreciate, but when it just gives the impression it's poor coverage it's hard not to balk at the idea.
Bottom line, for me I'm not ready to jump into the Contrast world just yet. When I come to do my Ad Mech Rangers I may well do the cloaks using my Iyanden Yellow, as I think it'll be just as good as this experiment here. I imagine if you're just starting out they might be useful but I'd be very much wanting some advice from those who know how to use them, maybe check out some YouTube videos to get my head round them. Extremely interesting, I think they have an immediate simple benefit, but then there is a much longer learning curve to master them fully, at least for me anyway.
Posted by 40kaddict at 12:13