Afternoon #WarHamFam and #WarhammerCommunity - I've been playing #MESBG [Middle Earth Strategy Battle Game] again at Otty's. I appreciate this is rapidly making a mockery of blogs title of 40kaddict but I go where the fun is. This was an exciting game against Liam's Elves, We rolled the baggage train where I had 5 'pack horses' along my [southern] board edge. My aim was to have 3 pieces of cargo at the end of the game. I also got an influence point for each item moving off the board. Liam had to kill a pack train and steal it's cargo and then escape on the northern board edge. 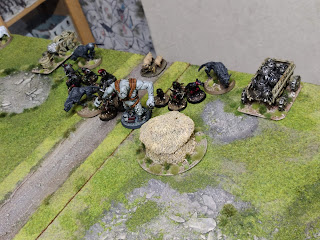 Now we read the rules quite a few times as it felt like the victory conditions were the wrong way round. I just had to hold onto the cargo, but that promise of extra influence points was mighty tempting. So I headed off to the right side to try to make for the trees and cover 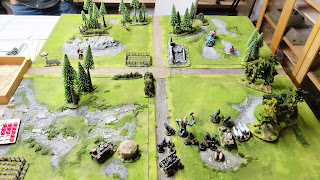 Unfortunately Liam's Elf bowmen had range, accuracy and proper deadly. I soon realised the long march up the board needed more cover. 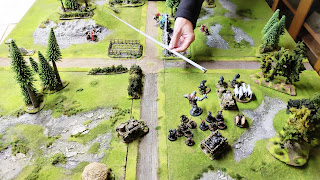 So, I started to sneak behind the trees and then took full advantage of the slightly larger than your average pack horse - wagons and cattle to hide some of my units behind them. 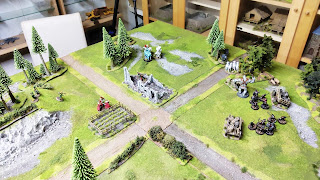 Liam could see me heading to the northeast board edge so reposition to cut me off. But my convoy continued on and I was beginning to struggle with congestion in some areas but still used the wagons for cover. 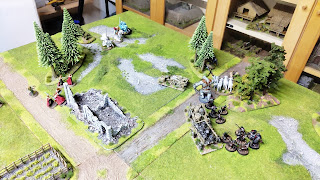 Things are beginning to get tense now, Liam closed off my escape and managed to get his foot troops and archers into the woods too. Priority is going to ne essential. 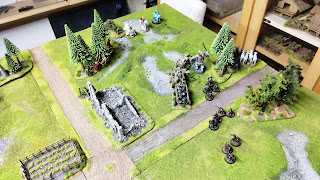 I move further up, with my cattle hoping to sneak off down the flank, the other items still as obstacles he has to get round, or kill. I have to say my heart was pounding at this stage. Numerous turns building up to this point. 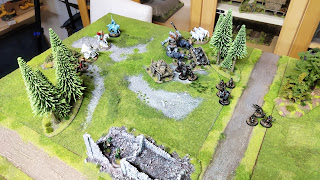 I'm guessing I lost priority as it's all kicking off now. My pack train was both a boon and a curse, getting in the way, blocking charges but also trapping some of my own models. Sadly I missed a picture before this. I was in a very lucky position where the troll managed to pick up a knight on his horse and hurl it 6" through a wagon a 3 other infantry. Each warrior he hit managed to avoid injury but one of them clipped the knight as he crashed into them and he was injured in the final sprawl as he landed. It was an epic moment. 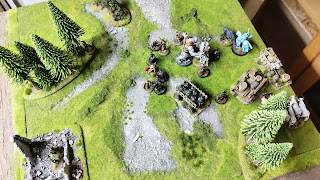 But Liam had quality fighters in his warband and started to pick off my Goblins, while my own success dwindled after the mighty thrown cavalry. He'd also misunderstood his objective in killing the back train and taking the cargo, so quickly set about destroying wagons and my herd of pigs But I think he was too bloodthirsty in his zeal and may have tipped me into 25%. I'd lost my force but I think I'd won the game. I still had 3 pieces of cargo and Liam had failed to steal those he'd taken from the damaged train. 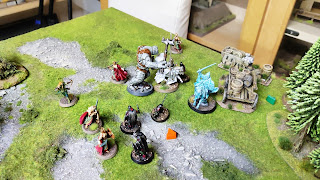 A really tense and exciting game, plenty of suspense leading up to the first clash of battle. The combat itself was challenging and I was lucky with the outcome, but the victory conditions were really confusing, certainly moreso for me in control of the pack train and it didn't help that Liam hadn't understood he had to kill/destroy each pack horse and then steal away it's cargo. I'm sure he'll play it differently next time. 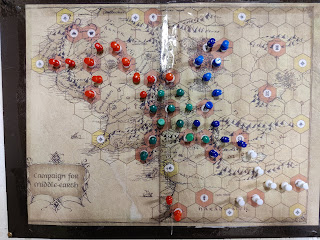 And there we have the map, I've started to make inroads to Scott's domain in the south. I'd thought to make a buffer between My red hexes of Moria and Lothlorien and Otty's green hexes, but thought if I'd put the marker I used in the south there Otty my see it as aggression. Instead he took those hexes and now I have him breathing down my door. That's what happens when you don't play to your faction!
Posted by 40kaddict at 12:19