Afternoon #WarHamFam and #WarhammerCommunity - I've been playing #MESBG [Middle Earth Strategy Battle Game] again at Otty's. I continue to take pictures of the games, but not always write the report soon after. This means these two games I had are really sketchy in my memory and not much of a report with so few images to remind me.
First up though I was playing Recovery against Scott's Khandish [mainly] cavalry. This was a real disadvantage for me as there are 5 objective along the centre of the board. First to search an objective and find the sole relic hidden in one of them and escape the board wins. Scott's cavalry and chariot can all move 10", I just have two Wargs with that pace. Add in the fact I have massive hill between me and the objectives and I was going to struggle to win that race. It might have been more interesting to have swapped sides but it's moot now. I got priority and luckily my +1 and rerolls to climb tests at least got many of my Goblins to the op of the cliffs. Meanwhile my Troll went round the left flank and my Wargs the right. 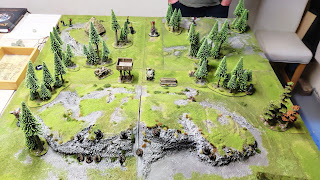 I got the search the objective on the furthest right - no relic. Scott started on the left and then, like me, deduced it had been hidden by Liam and Otty in the centre objective, leaving that wagon right in the way of my Troll attempting to catch up with the warrior hot-footing it up the board with the loot. Somehow, one of my Goblin Archers picked him off from maximum range, dropping the little green relic, but another warrior was nearby to take up the prize. Meanwhile the rest of his army prepared to face down my Wargs emerging from the trees in the top right. 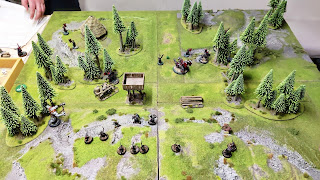 I came down from the hill, using the watchtower as cover. I may have searched the wagon to remove it as an obstacle, but the Troll managed to get past and perhaps squash on of the horsemen [or that's him next to the chariot], but it didn't look like I could catch the relic-bearer. 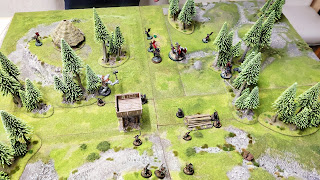 I vainly pushed on but I think it was just too far to catch up and I can't see any more Wargs. I think I lost this. 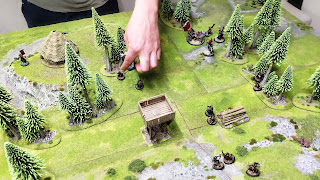 However, you can see my red pins I have quite an 'empire'. We started not from the yellow hexes, but I do have the Lake of Rhun, which means ever expansion phase, on a 4+ I get to secure an additional hex. Which I am going to try to use to my advantage. Also, having the Grey Havens means I can capture any coastal hex which might prove useful too. 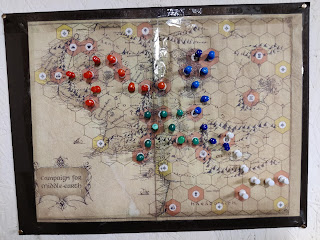 I think the second game of the evening was Seize Ground against Otty's Rohirrim. I hadn't expected a second game as it was getting to 10:30 but he said it wouldn't take too long, I think I was there until 1:30am! Ordinarily I'd have knocked it on the head but this was one of the most tactical games I'd played so far 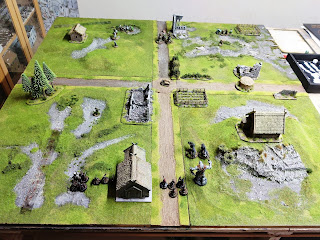 As the mission was very similar to how 5th edition 40k used to play its objectives it was really cool to try to find ways to be sat on an objective just as the game ends. But the game only ends when a warband is broke. So, it's a finer window of success because who knows when that will happen? In 40k it was at the end of turn 5, unless the game carries on so you always had a clue when you had to be camped. Anyway, I was trying avoid his cavalry as much as possible, which is why my Wargs hid in the vegetable patch and I tried to put as much terrain between me and his more effective archers. I even hid behind a wizened old man objective in the bottom right - using him as a human shield! Very Goblinesque! 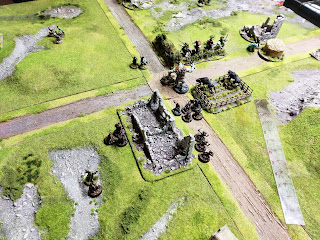 The hedge at the crossroad became a hugely strategic obstacle. It had stopped Otty from charging forward but having killed onw Warg with throwing spears he'd retreated and now it was slowing me getting to his horse warriors. Meanwhile his ghostly apparition [that randomly appears because he holds the Dead Marshes] held the strategic objective of a haystack. 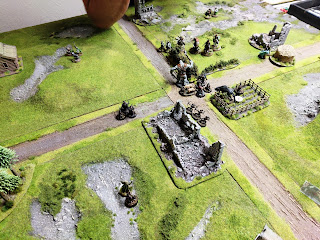 I was able to advance up the centre of the board with my Troll, leaving the piggy objective in the crossroads unguarded. Otty sent the ghost to capture it but I sneakily managed to trap him, but not strong enough to despatch it back to the afterlife. 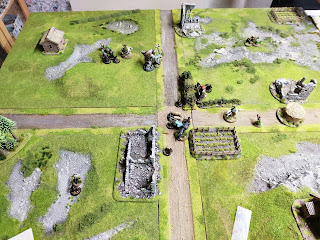 I think my Troll killed a Knight and a foot soldier, then stomped back to the crossroads while my Blackshield in the top right managed to engage with the remaining Knight and deny him the doggy objective. 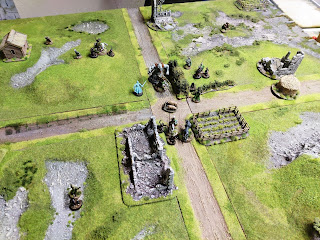 Now, I'm not sure what happened in the end but I think I somehow managed to win this. I know Otty has the peasant objective in the top right and I still have bottom left, so that was one each. I think the knight in the top left might have been killed by the Blackshield, the middle objective was contested and the haystack unclaimed. I was absolutely knackered but really excited about how it was enjoyable for tactical reasons. I think I had been a little outclassed again but it felt like decisions I made, like surging my Blackshields towards the rangers in the top left forced Otty to change his tactics.
Bearing in mind 4 of the objectives were in the top half of the board, only 1 in my half it was quite the slog for my slow moving gobbos. The Wargs are a useful addition for pace but it's a real challenge to get around, especially when you're up against cavalry and Otty, Liam and Scott are all using mounted troops, with increasing numbers in each. I think I need a third Warg to join the other two and definitely my Cave Troll is working well alongside the Blackshields. Once I've got those in place I might look to fill out more Goblins, I can take 20 models in my warband, rather than the usual maximum of 15. I'll see what my Influence points can get me after another Warg.
Posted by 40kaddict at 16:39