Afternoon #WarHamFam and #WarhammerCommunity I've been #PaintingWarhammer but ever so slowly. Adding the three additional bike to the batch certainly sapped some motivation. Add in my evening tied up watching Attack on Titan in it's entirety with my son it's quite the challenge to pop into the shed to paint.

That said I decided to do all the Blessed Verdigris, which also means picking out the feather on the Ravenwing banners and cowling. I don't do them white and they're almost this colour in that classic Ravenwing image.

As garish as that turquoise is it should tone down after a black wash. I think I made a mistake with using AP Hydra Turquoise, as I think my other Ravenwing used my lighter craft acrylics. At least it looks that way now I scrutinise my my past models. I also find the WiP pics a hassle to take with the sprue handles, so I'm even less inclined to record the progress, which doesn't help with motivation.

There's so much to do here I think I need a checklist of elements to tick off as they're done. Obviously the black highlights are the biggest things left to do and I am still trying to hold onto the idea that that's not hard. But, there's no getting around the fact there is a lot to do.

And bikes are notoriously labour intensive because you have the marine and the bike itself, and with the Attack bikes you have another marine and the sidecar! Not mention deciding how to do the cloaks on the Black Knights. So the process is not a problem it's just the scale of the task and finding time to do it that's daunting.

Frustratingly though I really want them painted. I can foresee them complete and it already fills me with a huge sense of satisfaction. I've also got Liam cracking on with his Adeptus Titanicus titans which are on my To Do List but I had no intention of tackling them anytime soon... 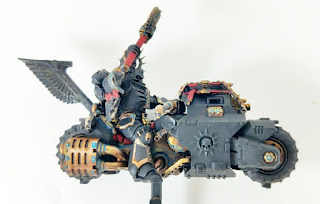 And this guy is only cropping up for convenience [but is more like an inconvenience]. 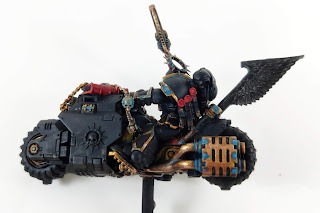 So, we find ourselves in that situation where if it feels like a chore then it's not fun and not a hobby. And yet I desperately want to do it but can't find the time or the motivation. In which case - don't worry about it! Watch anime with your son, play Middle Earth with your mates, go to bed early if you're tired. These will get done when they get done, either this Hobby Season or the next, life's too short.
Posted by 40kaddict at 12:26