Afternoon #WarHamFam and #WarhammerCommunity - I've been playing Middle Earth Strategy Battle Game again at Otty's. This predates the painted Blackshield, at this stage he was still in his primer state. We don't usually play with unpainted minis, but at least it made him easy to identify. We rolled the mission where a part of Orcs are defending an outpost, I've played it before. Liam was reluctant to play the Orc party again but we bullied him into it as having either of us take charge would have been biased one way or another. 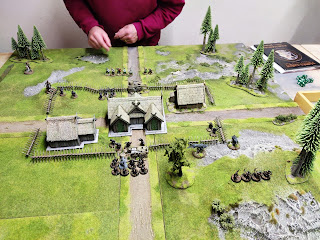 I got my Goblins up to the palisade sharpish, all my sword and shield guys back up by 'spearmen'. Yep, that Blackshield stuck out like a sore thumb! 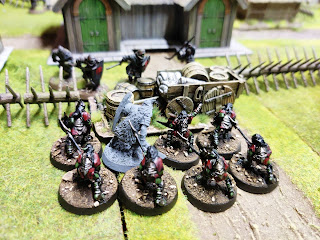 My Archers held the high ground and I now have two Wargs that skirted round the pailsade, using their speed to go the long way round, rather than get stalled mounting the fence. 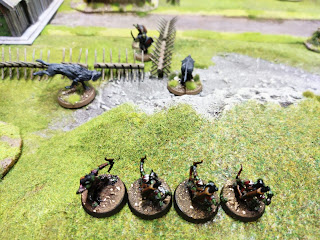 Otty had most of his Rohirrim assault the fence, with his two cavalry following my Warg tactic to go round the edges. 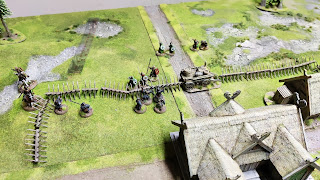 I managed to get over the fence - rerolls and +1 to climb tests is handy with these Goblins. It at least makes up for their slow movement normally. The Wargs got into the compound and I had to move the archers down because I needed more bodies to get into the outpost as Otty was starting to pile in. 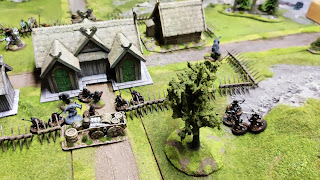 Despite my extra bodies Otty was doing a much better job of getting his warriors inside the outpost boundaries. There was a lot of careful noting of how many Orcs were left. As soon as it dipped below 50% it could trigger the end of the game on a D6 - 1 or 2. 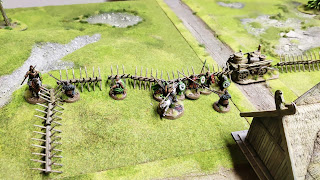 Sorry, no more pics. I was really lucky to have wiped out my Orcs, and get all my army inside. But I was also unlucky in my Warlord got wounded. So I had the numbers, but the game didn't end. Which prompted Otty to come for me. His only option was to kill enough of my Goblins so he had superiority, unfortunately he couldn't make it stick and it would end on the D6 and I won, despite having the lower points value, which got me even more benefits to grow my warband.
It was a little disappointing that this game took so long Liam didn't get a chance to play his own army, but I had so much fun playing. The system is really simple, there's a lot of nuance in movement but we're getting the hang of it. Dice rolls can be pivotal in places but they are hilarious when it goes wrong - for priority or 'in the way' rolls. I also ended up with my Warlord injuring his leg, so he now has -1" to his movement. We have such a laugh playing, I never thought I'd get into this but the proof is in the playing. Sadly, I'm not sure I could say the same about 40k at the moment. It's not a competition though, it's just investing and painting all these 40k figures and yet 20 Moria Goblins painted in a few hours and some borrowed Wargs are giving me so much more enjoyment.
Posted by 40kaddict at 12:23