Afternoon #warmongers and #warhammercommunity Battle Report - Middle Earth Battle Companies - Moria Goblins Vs Rohirrim [and Orcs]This time I took my Moria Goblins, rather than take his Rohirrim on a suicide mission I had no qualms about losses for him! We rolled a mission where there is a central village, surrounded by a stockade and held by 12 Orcs, which Liam controlled. The aim was to have the most models inside the stockade at the point when the Orcs numbered less than half their original composition [5] My 11 Goblins were on the eastern flank. 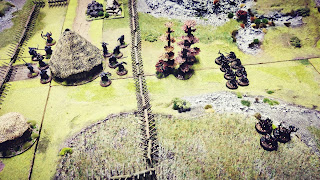 While Otty's Rohirrim came in from the north-west, with his horse warrior coming in through the northern entrance. 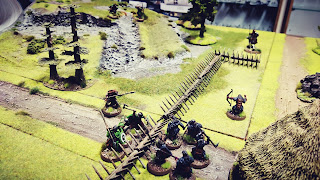 My plan was to whittle the Orcs away with the archers on the hill, then use my weight of numbers to get over the stockade and hopefully still have the advantage of those numbers to win when Otty's more effective warriors killed off his adversaries. 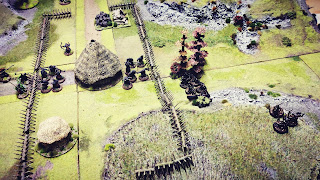 There is a lot of nuance in the game, movement is very particular with each model having a 1" engagement zone you can't really enter unless you get into combat. Unfortunately my Goblins only have a 5" move which doesn't help with this level of precision. Also, the hit on 5's and generally wound on 5's, although there are no saves unless you are a hero and they usually only get one 4+ but usually only 1 wound. I was a bit lucky though picking off an Orc quite early but you also have to contend with things 'in the way' So for every obstacle - the stockade or another model you have to roll to see if they hit the other thing[1-3, or the intended target - 4+]. So, it can be a little frustrating to roll that 5+, then need a 4+ to actually hit your intended target, get a 6 and then roll to wound and get a 1 or 2! 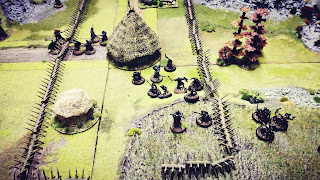 I managed to get my warriors inside the stockade but then they became additional obstacle against the Orcs nearest to me. As baddies I can shoot into combat but it was better to try and pick off those fighting the Rohirrim than accidentally kill my own troops. Even so, I still had to roll for 'in the way' for the Rohirrim or the Orcs, depending on who I was targeting. Otty's horse warrior came storming in. 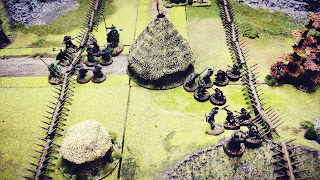 But I think he underestimated how good it would be against three Orcs. You make a 'duel' roll when in combat - both players roll off, the winner gets to fight, while the loser has to back off. Draws are resolved with who has the highest 'fight' characteristic. However similar to Blood Bowl, if you have more than one model in base contact you get an extra dice for the duel roll, increasing your chances. In this instance I think cavalry also got an additional bonus but it was perhaps 2 against 3, Liam one and they wounded on a 5 and killed him! Again, each model gets a roll, but if they surround the model so it cannot fall back and is trapped they get double their attacks. So you get a situation where you 'tri-point' a model, surrounding one base with three. Perhaps not here with the large cavalry base but even so, there's no horse anymore. 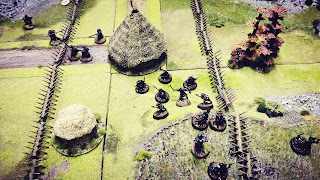 I managed to move the archers into the stockade as the Orc numbers slowly whittled down. You can half-move and still shoot, but at -1 to hit. So I could move 2.5" and still hit, but on 6's! Given that numbers were important I may well have take a couple of turns to get them over the stockade without firing. The only other thing to note is who gets priority - Good always go first on the first turn. Then you roll-off with draws always going to the player who did not currently have priority. It's an interesting mechanic, one perhaps other people or systems may be be more familiar with, but again there is subtlety and nuance that will require some greater understanding on my part. 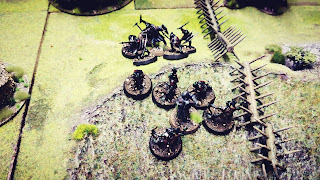 Overall I did OK, eventually getting most of my guys in stockade. It carried on for an extra turn after the Orcs were reduced to 5. I had surrounded the last 2 on my side and should have had a real chance to kill them both gaining additional XP but it would only continue for one game turn, not roll each turn to see if it continued and somehow they survived being bundled in that extra. I say somehow - look at my dice roll and one of those 1's was a re-roll! 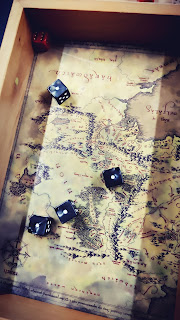 Regardless, I took a win, got some kills, XP and influence points to add to my warband, which is a whole other post...
Posted by 40kaddict at 12:00